White House Press Secretary Kayleigh McEnany pushed back against reports that the administration threw out a pandemic response plan left by the Obama administration, saying the the Trump administration simply replaced it, during a press briefing Friday afternoon.

McEnany then held up two binders. It wasn't possible to compare the binders to the documents she held up previously, which were not in binders.

"So we exchanged this one... for these two pandemic response plans," she added.

One binder was a 2018 pandemic crisis action plan, McEnany said, and the other was the "Crimson Contagion 2019 after-action report," which "exposed... the shortcomings in legacy planning documents which informed President Trump's coronavirus response."

But McEnany was short on the details when it came to the reports.

Asked about Crimson Contagion, an exercise that gamed out the US response to a pandemic, and if it recommended early and widespread testing in the event of the pandemic, she said she didn't know.

"What it basically did was say to us, look, some of the previous iterations of plans have put HHS in the lead, HHS of course plays a critical role in our response, but one of the things that was identified was you need a whole of government response from the highest levels," she answered.

McConnell falsely accused the Obama administration of failing to leave the Trump administration "any kind of game plan" for something like the coronavirus pandemic.

As Trump has done repeatedly during the pandemic, McConnell also laid undeserved blame at Obama's feet.

"They claim pandemics only happen once every hundred years but what if that's no longer true? We want to be early, ready for the next one, because clearly the Obama administration did not leave to this administration any kind of game plan for something like this," McConnell said.

It was the opposite of right.

Facts First: Obama's White House National Security Council left the Trump administration a detailed document on how to respond to a pandemic. The document, whose existence was publicly revealed by Politico in March, is called the Playbook for Early Response to High-Consequence Emerging Infectious Disease Threats and Biological Incidents.

"We literally left them a 69-page Pandemic Playbook.... that they ignored," Ronald Klain, a campaign adviser to Democratic candidate Joe Biden and the former Obama administration Ebola response coordinator, wrote on Twitter. 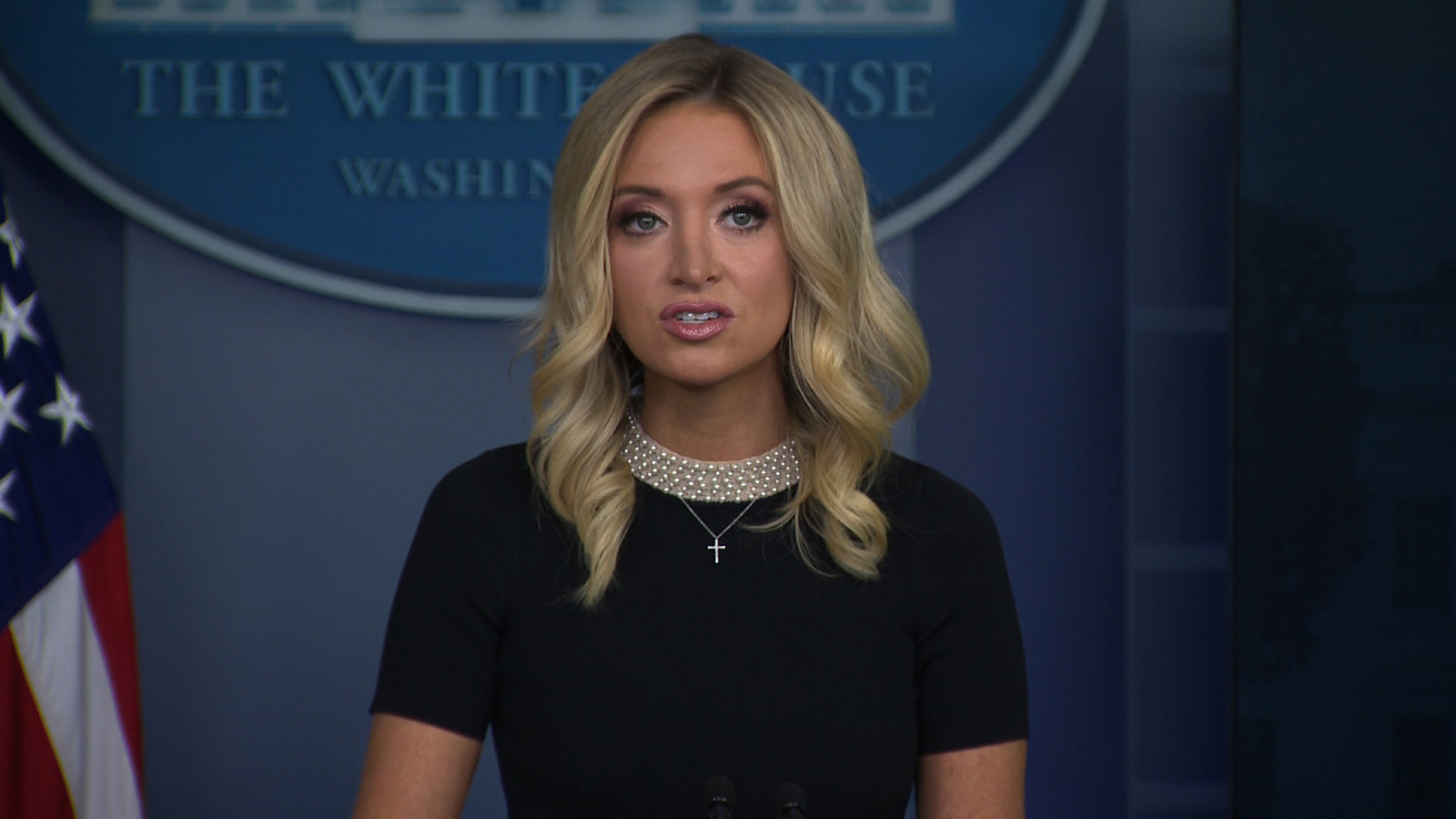 Facts First: This argument has some truth to it, but it's also somewhat misleading. While Trump isn't wrong to suggest he inherited a depleted stockpile of some medical supplies —the stockpile of masks, for example, was depleted and not replenished by the Obama administration — the cupboards were not completely "bare"; he inherited significant quantities of other supplies. And Trump had three years in office to build depleted stockpiles back up.

The Strategic National Stockpile was not empty before the coronavirus pandemic. For example, the stockpile contains enough smallpox vaccines for every American, among other medical resources. However, critical supplies that could be used to combat coronavirus were drained and not replenished.

Ultimately, both Trump and former President Barack Obama ignored the warnings of experts and failed to restock masks and prepare other supplies to fight a potential pandemic.

Here's the backstory:  A 2010 report from a federally-sponsored task force recommended that national stockpiles of masks and other medical equipment be replenished after the 2009 H1N1 outbreak, and identified potential supply chain issues in the event of a pandemic.

Additionally, a 2012 study from the US Department of Health & Human Services reported that 75% of the national stockpile's N95 masks were used during the H1N1 outbreak, and said an "ample supply" should be made available for use during a pandemic. The HHS study also warned of potential future ventilator shortages.

This February, Health and Human Services Secretary Alex Azar told Congress that the national stockpile contained over 10 million N95 masks. That's far short of the billion-plus masks that the government projected in 2015 would be needed in the event of a flu-like pandemic — and well short of the 7 billion needed in a worst-case scenario.

In 2010, the Association of State and Territorial Health Officials wrote a report sponsored by the CDC, titled "Assessing Policy Barriers To Effective Public Health Response In The H1N1 Influenza Pandemic." The report concluded that in the aftermath of the Swine Flu outbreak, "there should be a central repository of N95s which is replenished for future events," and that "various healthcare providers, including EMS, should enhance their current PPE stockpiles, including N95s."

The group also recommended that "supplies should be purchased in advance of an emergency, rather than essentially limiting the national supply chain in the midst of an emergency."

In addition, a 2012 HHS study on the H1N1 response reported that "75 percent of the SNS's N95 respirators... were deployed for use in healthcare settings" during the Swine Flu outbreak. Critically, the report also identified risks of future ventilator shortages.

"If a large proportion of the U.S. population were to become severely ill during a pandemic and required mechanical ventilation, the healthcare system would quickly become overwhelmed. The number of respiratory-compromised patients is likely to easily surpass the number of available ventilators and trained personnel by severalfold."

Vice President Mike Pence is staying out of some of the events with President Trump today out of an abundance of caution, a White House official said.

CNN reported earlier in the week that Trump and Pence would be keeping their distance from one another "for the immediate future."

White House press secretary Kayleigh McEnany reiterated on Thursday that Pence is healthy. And a separate staff member told CNN that his staff is healthy as well.

All retail stores in Arkansas will be open for business starting Monday, Gov. Asa Hutchinson announced at a news conference.

Bars will remain closed but an announcement on a timeline for their reopening will come next week, Hutchinson added.

He told CNN's Brianna Keilar that although there wasn't the same crowd energy from a regular concert, "there was just various car horns and headlights and cheers...we had such a great time."

"The idea of playing to people in vehicles is a bit of a no brainer," the grammy winner said, adding that figuring out how to scale up in a safe, socially distanced way, is the challenge.

Urban and his team spent a month planning the concert to play with a minimal crew.

"I didn't really have a live band on stage. I had two players, but they were 8 or 10 feet away from me. And some ways, it was like glorified karaoke. There was a guy playing tracks and then keyboard, sort of his laptops of tracks and I'm singing live and playing but it meant that we had very limited crew. All the crew had masks on," he said.

"It was a way to see what this could look like and it's definitely a potential," Urban added.

Restaurants and retail stores will be allowed to reopen at up to half their normal capacity, the statement said.

Barbers, hair salons and nail salons can open, as well as museums and drive-in theaters.

Condo associates were earlier allowed to reopen pools and can now reopen gyms, community rooms and other amenities, according to the statement.

Employees and customers must wear face coverings and hand sanitizer must be available throughout workplaces.

Regular and intense cleaning will be required, particularly in high-traffic areas and bathrooms. Social distancing will continue to be mandatory.

However, beaches will not be open yet.

"We made a collective decision that we did not want to risk reopening the beaches here at the same time as reopening restaurants and retail. Too much is at stake. We must get this right," the statement said.

"Our expectation is to allow passive recreation on the beach within the next couple weeks," the statement added.

The Houston Independent School District (HISD) is considering year-round classes via distance learning as an option for students due to the interruptions tied to the coronavirus pandemic, interim superintendent Grenita Lathan said Friday.

Any change to the district’s academic calendar needs to be approved by the HISD Board of Trustees.

"We are prepared to continue the HISD at-home platform if required for the 2020-21 school year, or if future school interruptions occur," Lathan also told reporters in Houston.

The district estimated that 35% of homes do not have internet access and HISD has issued internet hotspots and laptops to further support students, according to Lathan.

The district purchased 25,00 devices and 14,000 devices provided to students since mid-March, Lathan said.

The New York City Health Department defines probable deaths as people who did not have a positive Covid-19 laboratory test, but their death certificate lists as the cause of death “COVID-19” or an equivalent.

There have been approximately 187,848 coronavirus cases in the city and at least 49,580 people have been hospitalized, according to the city.

Palm Beach in Florida will reopen beaches to everyone, not just residents.

A week ago, the commissioners voted to reopen beaches to residents only. That stipulation was removed today, therefore no residency restrictions will apply to the reopening of beaches.

The following conditions and restrictions will apply, per county government: