“Some regions are ready to go today, they just need to get some logistical pieces in order by the end of the week. Some places are very close … just one or two criteria that haven’t been met yet,” he said.

He reiterated that the reopening of businesses would be phased, starting with construction, manufacturing, retail (for curbside pickup), agriculture, forestry and fishing.

Here's a full look at how the phased reopening will work: 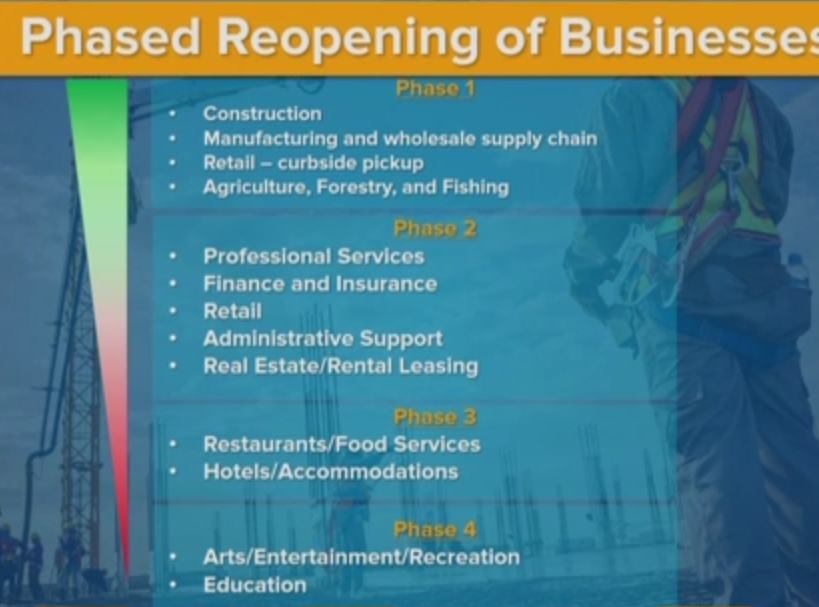 New York Gov. Andrew Cuomo said that as businesses are allowed to reopen in some parts of the state, they must take certain safety precautions.

"Businesses have to do their part also," he said.

He outlined some of the changes that may come:

Gov. Andrew Cuomo said today that New York's number of new Covid-19 cases has declined to a rate of "about where we started this horrific situation."

"So we see all the arrows are pointed in the right direction. If you look at the number of new Covid cases per day, about 488. That is just about where we started this horrific situation," the governor said.

He said the May 10 numbers mirrored the number of cases on March 19, before New York "went into the abyss of the Covid virus."

"When you see the number of lives lost, again, we're right about where we started before we really went into the heart of this crisis. And that's what it's been. It's been a crisis and a painful one. But we're coming out of the other side. So in many ways, from my point of view, we're on the other side of the mountain, right?"

There were 161 people who died on Sunday across the state of New York, Gov. Andrew Cuomo said.

"The number of lives lost, still too high." Cuomo said.

He added that the number is "better than it has been."

The total number of deaths on Sunday is down from the 207 people who died in the state on Saturday.

New York Gov. Andrew Cuomo said the state is entering a "new chapter" of the coronavirus pandemic this week, as the state's stay-at-home order expires on Friday.

He said some regions in the state will begin reopening after the order expires. He stressed that regions will only open when they are ready: They must have testing and tracing capacity in place and show declining numbers.

Vermont Gov. Phil Scott said there have been no new positive cases of coronavirus or new deaths reported as of yesterday.

“As I’ve said, we must still be cautious, Vermonters must still remain vigilant knowing how this virus has affected some of our neighboring states,” Scott said in a news briefing on coronavirus today.

More than half of the US airline fleet is now sitting idle, according to new numbers from the industry.

At least 3,162 planes were grounded on Sunday, representing 51% of the fleet, according to Airlines for America, which represents major air carriers.

The measure includes planes that have not flown in the last seven days.

The figure has hovered just shy of the 50% mark for several weeks. On Sunday, the group provided figures that showed 3,046 planes — or about 49% — were grounded as of Thursday.

The aircraft are not needed because airlines have removed from their schedules 73% of domestic departures and 94% of international departures, according to Airlines for America.

Taking planes out of service and cancelling flights can increase the number of passengers on a given flight. There has been a slight uptick in the number of people flying as well.

New York City Mayor Bill de Blasio said the city's schools are still poised to be open this fall, but he noted that officials are watching the pediatric multi-inflammatory syndrome linked to coronavirus as they assess what's best for students.

"Anything we do about schools is going to be led by health and safety first - that's absolutely the first question in any reopening. As of this moment, we believe we can reopen schools safely and well in September, but we have to keep a very close watch on this syndrome to make sure that we attack it in every way possible in the meantime."

What this is about: Last week, New York State Department of Health reported some children have developed an inflammatory syndrome possibly linked to the coronavirus.

"Thankfully most children with COVID-19 only experience mild symptoms, but in some, a dangerous inflammatory syndrome can develop," New York State Department of Health Commissioner Dr. Howard Zucker said in a statement.

New York is investigating if the cases contradict the belief that children are less at risk for coronavirus and what other hospitals should look out for, Gov. Andrew Cuomo said.

Treasury Secretary Steve Mnuchin phoned in to CNBC this morning as the stock market opened down.

Mnuchin said "most" states are cooperating with federal guidelines as they begin the process of reopening. Responding to Tesla CEO Elon Musk's threat over the weekend to move the company's headquarters out of California after local officials refused to let the company reopen its Fremont factory, Mnuchin said he agreed with Musk.

"He's one of the biggest employers and manufacturers in California, and California should prioritize doing whatever they need to do to solve those health issues so that he can open quickly or safely or they're going to find, as he's threatened, he's moving his production to a different state," Mnuchin said.

Mnuchin said that there were "ongoing discussions" in the administration on how to assess which states are deserving of federal aid. He reiterated that the President and congressional Republicans are against "bailing out" state pensions. Mnuchin said although Democrats have expressed a desire to "throw a lot of money" at the problem of state aid, he has not heard from Democrats that they are willing to put money toward state pensions either.

"I think it's very clear there is not going to be bipartisan support that bails out states from previous problems," Mnuchin said. He also highlighted lending facilities opened by the Federal Reserve and the Treasury Department to help states with cash flow issues.

Asked why he would not view the issue of states that rely heavily on sales tax revenues laying off workers as they face budget shortfalls with immediacy, Mnuchin said the CARES Act did give lot of money to the states, which was intended for coronavirus-related expenses, not for lost revenues. He said the federal government recently gave states more flexibility in allowing the use of these funds to keep first responders employed.

"The issue of lost revenues is a complicated issue. These are taxing authorities on their own, different states tax different ways. Some states have more issues. Some states have less issues," Mnuchin said, adding that he will continue to discuss the issue with President Trump and Congress.