States reopen in US as coronavirus pandemic persists

The US Food and Drug Administration will now require antibody test makers to promptly seek FDA authorization, as the agency aims to rein in unproven and fraudulent tests that have flooded the market.

The new policy, announced today, requires commercial manufacturers to submit emergency authorization requests, along with validation data for their antibody tests, within 10 business days. The FDA is also setting specific performance recommendations for all test developers.

The agency also said it has the capability, working with the National Cancer Institute, to independently validate antibody tests on the market.

Why this matters: The move to require authorization reverses a policy the FDA put in place in mid-March, which loosened approval standards and allowed companies to sell antibody tests, also known as serological tests, without providing evidence that the tests worked. It quickly became clear that many of the tests were unreliable and some companies marketed tests that they falsely claimed were FDA-approved or FDA-authorized or claimed the antibody tests could be used to diagnose Covid-19.

More context: Antibody tests are used to check for prior Covid-19 infection and can provide a better sense of how much of the population has already been infected and might have some immunity to the virus. It’s still not clear whether the presence of antibodies means someone is immune or how long that immunity might last.

To date, at least 10 antibody tests have been authorized under an individual EUA, most within just the past few days, and over 200 antibody tests are currently the subject of a pre-EUA or EUA review.

Florida is allowing businesses to open throughout much of the state today, according to Gov. Ron DeSantis.

DeSantis said restaurants and retail spaces could let customers inside, but only at 25% capacity, and people must adhere to social distancing guidelines from the US Centers for Disease Control and Prevention.

Note: These reopening measures don't apply in three of the counties hit hardest by coronavirus. They are Broward, Miami-Dade and Palm Beach counties, which account for about 6.2 million of Florida's residents, according to US Census data.

DeSantis he took a victory lap that began at the White House last week — touting his "tailored" and "surgical" approach to stay-at-home orders as the central reason Florida has so far defied the dire predictions that it would become "way worse than Italy."

The mayor said the city intends to give out 7.5 million face masks and cloth face coverings.

"Wherever you turn, you're going to be offered a face covering," de Blasio said.

In terms of where they'll be handed out, the mayor said parks "will be one focal point," as well as public housing and food distribution centers. He added that New York Police Department officers will be carrying a supply of face coverings to hand out as well.

New York Mayor Bill de Blasio said this morning, "For the first time since March, we actually start a week with enough of all of the PPEs we need" in New York City.

De Blasio said that every hospital and nursing home in the city will get the medical supplies including N95 masks and gowns "for the week ahead."

"We have a little breathing room," the mayor added.

US stocks kicked the new week off lower as tensions between the United States and China are rising.

What's this about: President Trump last week threatened China could face new tariffs over its handling of the coronavirus outbreak. US Secretary of State Mike Pompeo said over the weekend there is "enormous evidence" that the virus originated in a laboratory in Wuhan.

Here's how the markets opened the week:

American, United, Delta and Southwest Airlines all fell after Buffet disclosed he sold his shares because he believes it will take years for air travel to recover from the coronavirus crisis.

After spending more than a month in quarantine due to the Covid-19 pandemic, crew members onboard Royal Caribbean and Celebrity Cruise Line ships are one step closer to disembarking.

In a letter to employees, Celebrity Cruises says they will agree to strict guidelines set forth from the US Centers for Disease Control in order to disembark crew members safely.

"The CDC has asked me and other cruise line leaders to sign a letter limiting our options for getting you home and taking responsibility for your actions in order to secure their approval to disembark you. In the spirit of doing everything we possibly can to get you home, I have decided to sign this letter," Celebrity Cruises President and Chief Executive Officer Lisa Lutoff-Perlo said.

Under the agreed upon guidelines, cruise lines will begin transferring certain crew members by nationality onto different ships around the world. American crew on ships close to the United States will be repatriated with private transportation beginning as soon as possible, presumably in the next week, the letter stated. American crew members in Asia will be flown home from the Philippines as soon as the Manila airport reopens.

Crew members who do not wish to evacuate the ship will continue to receive room and board accommodations, the letter stated.

US Treasury Secretary Steve Mnuchin said it is “too hard to tell” whether international travel will resume this year.

During an appearance on Fox business this morning, he said, "Too hard to tell at this point, Maria. I hope down the road, it is."

"Our priority is opening up the domestic economy. Obviously, for business people that do need to travel, there will be travel on a limited basis. But this is a great time for people to explore America,” he added.

Mnuchin also repeated an update the Administration made Sunday on Paycheck Protection Program (PPP) funding, saying that $175 billion of the $310 billion has been used. In this round of funding, 2.2 million loans have been processed, the average size $79,000.

“There were some hiccups with the systems,” he conceded, but “now the systems are up and running,” predicting 60 million people will be impacted by this round.

Mnuchin was pressed on whether there might be flexibility for businesses regarding PPP loans. He said it was “not designed as a loan, it was really designed as a grant” and pointed small businesses toward other loan programs available to help with overhead costs.

He was pressed again on this with the examples of restaurants, most of which will not be able to reopen under statewide guidelines at full capacity to generate the revenue to rehire their staffs and forgive their loans within the time frame specified by the PPP legislation.

“This is the way the program was designed by Congress… I don’t have the flexibility to change that,” he said.

President Trump, Mnuchin said, is “sympathetic to the restaurant industry.”

It's Monday morning in the US. Here's what you need to know about the coronavirus pandemic to start your week:

It took a global pandemic for the Supreme Court, an institution rooted in tradition and precedent, to change how it conducts its business.

In lieu of the pomp and circumstance associated with the highest court in the land, where lawyers are still presented with quill pens, television cameras are not allowed and only those lucky enough to get inside the building can hear the proceedings live, on Monday morning the justices will conduct their business over a simple fiber optic cable.

To some, teleconferences are the new normal as the world grapples with social distancing, but for the justices and arguing counsel, the change will impact how the court digests its cases and how the lawyers prepare.

"I never thought the day would come when high on my list of pre-argument worries was how to keep my dog from interrupting," veteran lawyer Lisa Blatt, who will argue the first case, told CNN.

On top of that, the justices will also break another tradition: They will let the public listen in real time. Numerous outlets, including CNN.com, will broadcast the proceedings live.

The experiment will begin Monday morning at 10:00 a.m., and play out for six argument sessions over two weeks. The court will work out the kinks in a couple of under-the-radar cases to start, but will build toward some of the biggest cases of the term -- including the duel over President Donald Trump's financial and tax records. 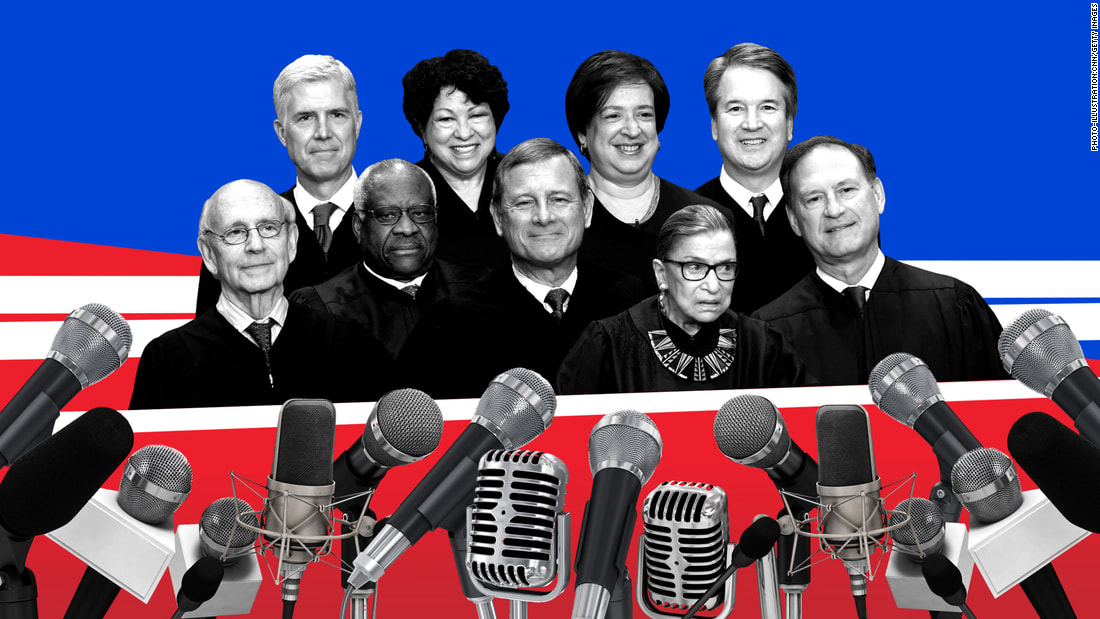 'Oyez! Oyez! Oyez!' The Supreme Court is live on the air