Our live coverage has ended. Read more in the posts below.

President Biden on Thursday urged Congress to make a number of moves to reduce gun violence during his speech to the American people in the wake of several mass shootings in the country.

Here are his main proposals:

The President called for a ban on "assault weapons" and high-capacity magazines, and short of that, he said the age to purchase them should be raised from 18 to 21.

"We should reinstate the assault weapons ban high-capacity magazines that we passed in 1994 with bipartisan support in Congress and the support of law enforcement," Biden said. "Nine categories of semi-automatic weapons were included in that ban, like AK-47 and AR-15. And in the 10 years it was law, mass shootings went down. But after Republicans let the law expire in 2004 those weapons were allowed to be sold again. Mass shootings tripled. Those are the facts."

He said Congress should also "limit how many rounds a weapon can hold."

"Why in God's name should an ordinary citizen be able to purchase an assault weapon that holds 30 round magazines that lets mass shooters fire hundreds of bullets in matter of minutes?," he asked. "The damage was so devastating in Uvalde. Parents had to do DNA swabs to identify the remains of their children, nine- and 10-year-olds."

And if Congress can't ban assault weapons, it should raise the age to purchase them from 18 to 21

"Look I know some folks will say 18-year-olds can serve in the military and fire those weapons," Biden said. "But that's with training and supervision by the best trained experts in the world. Don't tell me raising the age won't make a difference. Enough."

Biden further pushed Congress to strengthen background checks and act safe storage law and red flag laws, which he said would, "keep guns out of the hands of felons" and "fugitives."

"Stronger background checks are something that the vast majority of Americans, including the majority of gun owners agree on," he said. "I also believe we should have safe storage laws and personal liability for not locking up your gun."

Repeal the immunity that protects gun manufacturers from liability

"We should repeal the liability shield that often protects gun manufacturers and being sued for the death and destruction caused by their weapons," he said. "The only industry in this country that has that kind of immunity. Imagine if the tobacco industry had been immune from being sued where we be today. The gun industry's special protections are outrageous. It must end."

Biden said there was a "serious mental health crisis in this country," something Republicans have turned to instead of backing new gun restrictions.

"We have to do something about it," he said. "That's why mental health is at the heart of my unity agenda that I laid out in the State of Union address this year. We must provide more school counselors or school nurses, more mental health services for students and for teachers. More people volunteering as mentors to help young people succeed. More privacy protection and resources to keep kids safe from the harms of social media. This unity agenda won't fully heal the wounded souls, but it will help, it matters." 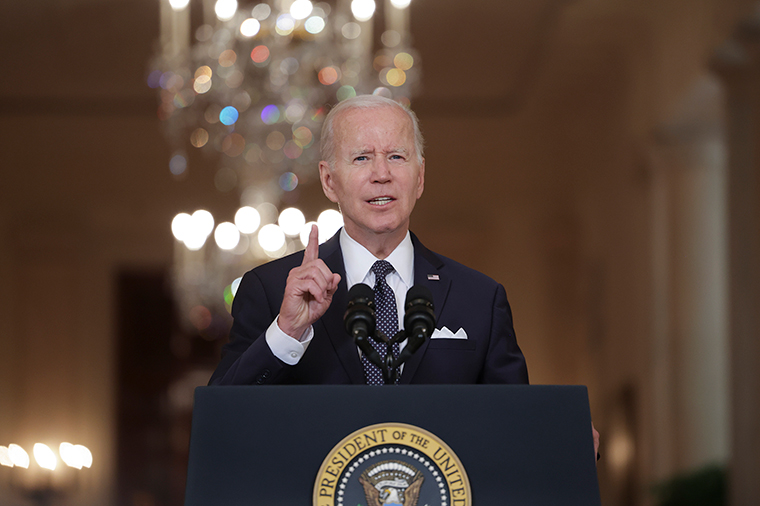 President Biden ended his remarks on Thursday with a final plea for action, saying change needs to happen "for the children we've lost, the children we can save."

He called on lawmakers and voters to "hear the call and the cry" and "meet the moment."

It comes after a mass shooting at an elementary school in Texas left 19 students and two teachers dead.

"Let's hear the call and the cry. Let's meet the moment. Let us finally do something. God bless the families who are hurting. God bless you all," he added.

The President ended his speech with a prayer from a hymn he said is sung in his church based on Psalm 91: "'May he raise you up on eagle's wings and bear you on the breath of dawn, make you to shine like the sun and hold you in the palm of his hand.' That's my prayer for all of you. God bless you."

Biden said federal red flag laws would allow adults to alert authorities if “a child, a student, a patient is exhibiting violent tendencies, threatening classmates, or experiencing suicidal thoughts that makes them a danger to themselves or to others,” touting similar provisions in 19 states and the District of Columbia, including one in Delaware named for his son — former Delaware Attorney General Beau Biden.

And background checks, he said, offer a solution “that the vast majority of Americans, including the majority of gun owners agree on.”

A House-passed bill, HR 1446, backed by Democratic Rep. Jim Clyburn of South Carolina, would close what’s known as the “Charleston loophole,” which allows some licensed gun sales to go through before a required background check is done.

Senate Democrats took steps Tuesday night to place the bill — called the Enhanced Background Checks Act of 2021 — onto the legislative calendar so it can be voted on, but it’s unclear when the Senate will vote on the measure.

At this time, the legislation does not have the 60 votes required to clear a legislative filibuster in the Senate. 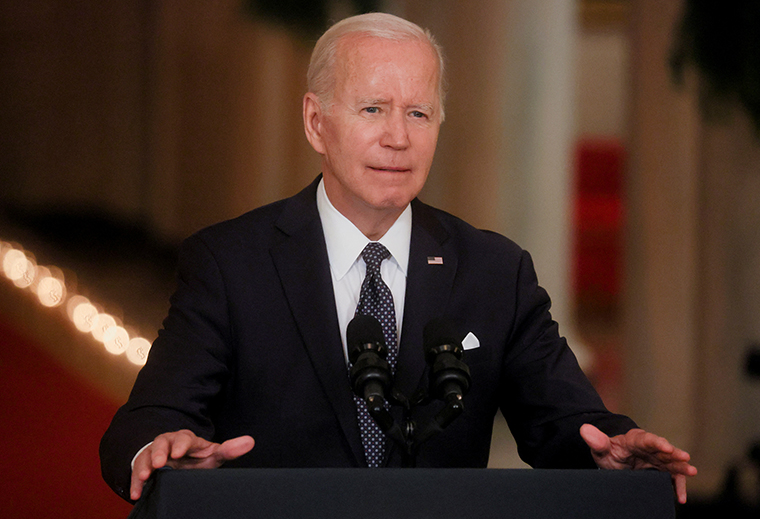 President Biden bemoaned Republican opposition to new gun control measures in a speech from the White House, calling the resistance in the face of mass shootings "unconscionable."

"It's time for the Senate to do something," he said. "But as we know, in order to get anything done in the Senate, we need a minimum of 10 Republican senators."

Still, he used the moment to call out GOP lawmakers who have resisted attempts in the past to pass gun control laws on background checks and other areas.

"My God, the fact that the majority of the Senate Republicans don't want any of these proposals, even to be debated or come up for a vote, I find unconscionable," Biden said.

"We can't fail the American people again," he added.

Concluding his address, Biden said if Congress failed to act he believed American voters would punish them at the ballot box.

"I know how hard it is, but I'll never give up. And if Congress fails, I believe this time a majority of American people won't give up either. I believe the majority of you will act to turn your outrage into making this issue central to your vote. Enough, enough, enough," he said.

After a nearly 10-hour long session during what was originally scheduled as a recess week, the House Judiciary Committee has voted 25-19 down party lines to approve a package of gun control legislation that comes in the wake of multiple mass shootings in the country.

The vote unfolded as President Biden delivered remarks on gun violence and urged Congress to act.

The package — called the “Protect Our Kids Act” — encompasses a wide range of Democratic priorities that includes raising the legal age to buy certain semiautomatic centerfire rifles from 18 to 21 years old, establishing new federal offenses for gun trafficking and for selling large-capacity magazines, and allowing local governments to compensate individuals who surrender such magazines through a buyback program.

It would create a tax incentive for retail sales of safe storage devices and criminal penalties for breaking new requirements regulating firearm storage on residential premises, and take steps to strengthen existing federal regulations on bump stocks and ghost guns.

In a letter to House colleagues, House Speaker Nancy Pelosi said the bill will come to the floor for a vote next week. But the bill is not expected to get the 60 votes required in the Senate to overcome a filibuster.

Read more about the package here.

“We should repeal the liability shield that often protects gun manufacturers and being sued for the death and destruction caused by their weapons,” Biden said in a prime-time address from the White House. “It’s the only industry in this country that has that kind of immunity – imagine if the tobacco industry had been immune from being sued, where we’d be today.”

Under the 2005 Protection of Lawful Commerce in Arms Act, gun manufacturers cannot be held liable for the use of their products in crimes.

However, gun manufacturers can still be held liable for (and thus sued for) a range of things, including negligence, breach of contract regarding the purchase of a gun or certain damages from defects in the design of a gun.

President Biden said the age to purchase assault weapons must be raised from 18 to 21 if lawmakers cannot agree on an outright ban on those firearms.

"We must at least raise the age to be able to purchase one to 21," Biden said at the White House.

He said he was cognizant of criticism that some 18-21-year-olds serve in the military and handle those weapons as part of their service.

He said those individuals receive "training and supervision by the best trained experts in the world."

President Biden issued a call to reinstate a ban on assault weapons that he said helped prevent horrific murders but expired in 2004.

"We should reinstate the assault weapons ban," Biden said at the White House, delivering a new call to prohibit the type of high-capacity weapons used in recent shootings in Uvalde, Texas, and Buffalo, New York.

Biden said in the 10 years the law was in place, mass shootings decreased.

"After Republicans let the law expire in 2004, those weapons were allowed to be sold again. Mass shootings tripled," Biden said

He said the weapons inflicted gruesome damage on their victims and particularly children.

"The damage is so devastating and in Uvalde, parents had to do DNA swabs to identify the remains of their children, nine and 10-year-old children," he said.

The President noted that the rights granted by the Second Amendment are "not unlimited."

President Biden urged action in the wake of three mass shootings in the US, saying "this isn't about taking away anyone's guns."

"In fact, we believe we should be treating responsible gun owners as an example of how every gun owner should behave," Biden added during remarks on Thursday.

The President said he respects "the culture and the tradition" of gun ownership, but that the Second Amendment "like all other rights is not absolute."

For example, he said, "machine guns have been federally regulated for nearly 90 years. This is still a free country."

After other mass shootings in the US, like the ones in Columbine, Sandy Hook and Parkland, Biden said nothing changed.

"This time that can't be true. This time we must actually do something," he said. "The issue we face is one of conscience and common sense."

The President said when he visited the sites of two of the most recent shootings in Buffalo, New York, and Uvalde, Texas, the message from families was clear.

"Standing there in that small town, like so many other communities across America, I couldn't help but think, there are too many other schools, too many other everyday places, that have become killing fields, battlefields, here in America," Biden said, recalling his visit to Robb Elementary School in Texas, where 19 students and two teachers were killed on May 24.