FEMA administrator Brock Long, who's agency is in charge of the recovery, told CNN this morning that he expects the death toll to rise.

"I expect the fatality count to climb today and tomorrow as we get through the debris, and I am very frustrated by that," he said, "because we seem to not learn this lesson in this country."

He added, "Bigger FEMA is not the answer. Better building codes, resiliency, pre-disaster mitigation is the answer if we want to overcome and reduce the impacts of disasters in those areas."

Brewster confirmed that four were from drowning and the fifth was in a motor vehicle death.

A news release from the Hanover County Fire-EMS Department says Lt. Brad Clark was killed while responding to a two-vehicle crash when a tractor trailer struck his engine.

**A word of caution: If you encounter flooding while driving like this video shows, officials recommend you do not try to drive through it -- turn around, don't drown.

CNN is in Mexico Beach, Florida, where it’s "utter devastation."

CNN's Miguel Marquez, reporting from the obliterated city, said "most of the homes and businesses along the ocean are gone. Wiped down to foundations."

There are 165 search and rescue personnel going house to house and they can only search during daylight hours.

There are dozens, maybe hundreds, of residents who either stayed here or were able to get back today, Marquez reports. The team has found about a dozen people who survived the storm. Some want to leave, but most don’t.

As for provisions, the team came across several people at a convenience store who were eating food that had blown out of the store. They said they hadn’t seen any decent food in the last 24 hours.

He rode out hurricane Michael in the hospital. He tells CNN that it was extremely frightening -- and the damage is significant.

While no one was injured during the storm, Campbell tells CNN that the roof on the tower, where most of the patients would be, lifted up during a wind gust.

He says that it did not come off completely but it did lift enough to where water began pouring into the hospital.

They moved some patients into the hallways.

Campbell says the windows are all double paned, but the exterior panes on several of the windows did break and water started coming in.

The third floor maternity care unit was evacuated to another level due to flooding.

Hospital officials moved some of the ventilator patients to another area because the generator could not handle all of the patients at the same time without interrupting care. We are told that none of the patients, including the critical cardiology and pulmonary patients, had their care interrupted due to the hurricane.

There were no injuries or deaths attributed to the hurricane and the issues that arose from it.

The hospital had about 1,500 people –- doctors, nurses, staff, patient, patient’s families, some staff members families including Scott Campbell's wife -- inside the building when the storm struck. 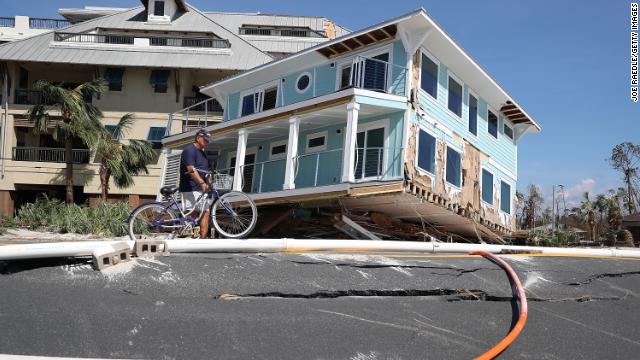 At least 1,272, 235 customers are without power across seven states as of 7 a.m. ET Friday, according to multiple utility websites and emergency management offices.

Five Michael-related deaths are being reported in Virginia by the state’s verified Department of Emergency Management Twitter account.

This brings the death toll from the storm to 11:

The VA Department of Emergency says they had 5 suspected tornados and are reporting 520,000 without power, and 1,200 roads are closed. 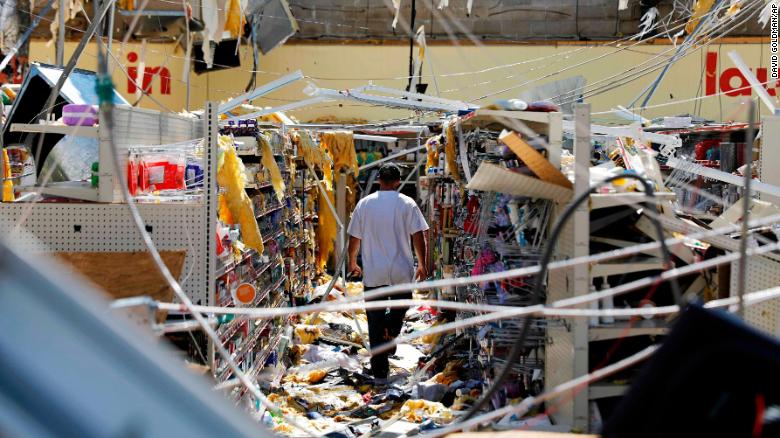 As Michael moves into the Atlantic, the days of misery are far from over in the coastal cities left devastated beyond recognition. There's no water, no power and emergency officials have no access to many towns from the Florida Panhandle to Virginia.

Michael, one of the most powerful hurricanes to hit the United States, left the East Coast early Friday morning. Yet, parts of Virginia are still seeing dangerous wind gusts, the National Hurricane Center said.

Aerial footage shows coastal cities in Florida completely wiped out. Residents are walking through piles of debris, some assessing the damage and others trying to get out and find food.

"This is not stuff that you just put back together overnight," Federal Emergency Management Agency Administrator Brock Long said Thursday. "It's unrealistic for people to think it's going to happen in the next day or two."

By the numbers: 11 people are dead across 4 states as a result of Hurricane Michael. Nearly 1.4 million customers are without power in 7 states due to outages. Recovery efforts continue in Florida, Georgia, Virginia, North Carolina, South Carolina and Maryland.

Read our latest report: Michael is leaving behind millions of people facing a daunting recovery in the days ahead

Tangie Horton and her husband should have been celebrating their 32nd anniversary on Wednesday. Instead, they watched Hurricane Michael descend upon the Florida Panhandle, leaving destruction in its wake.

The couple lives in Mexico Beach, but they rode out the storm in nearby Callaway.

"Me and my husband and my dog Babygirl watched as carports, roofs, and other things flew by us in the air," Horton said.

On Thursday, they did not attempt to go to Mexico Beach, as search and rescue teams had sealed off the area to the public. Instead, they drove to a friend's home along State Road 22 through Callaway, Parker and Panama City. Horton said she cried as they drove through the wreckage, "knowing everyone lost everything.”

Horton captured the drive on video. At one point, she said, "There are a lot of people out trying to dig through what’s left of what they’ve got.”

Panama City resident David Sebastian stayed in his damaged townhome Wednesday night with his roommate and five dogs because he said they didn't have cell service or electricity to figure out where to go.

The roof of his townhome was ripped apart as Hurricane Michael slammed into Panama City.

"We had lost service and data during the storm. We lost the roof to the house. The townhouse next to us fell in. The glass blew out the windows. Water was pouring in from everywhere. We barely managed to stay safe," Sebastian said.

He continued: "We couldn't get out last night because of the downed trees and power lines plus we had no data so no news about anything whatsoever. We had to stay in the house in two inches of water."

Sebastian, his roommate and the dogs eventually made it out and headed to Panama City Beach.