Hurricane Michael, currently packing maximum sustained winds of near 120 mph, could intensify to a Category 4 storm when it makes when it makes landfall in Florida early Wednesday packing a "life-threatening" storm surge, the National Hurricane Center said in its 7 p.m. ET update.

The storm will move across the Gulf of Mexico tonight then churn across Florida on Wednesday, and the southeastern US late Wednesday night into Thursday, it said. 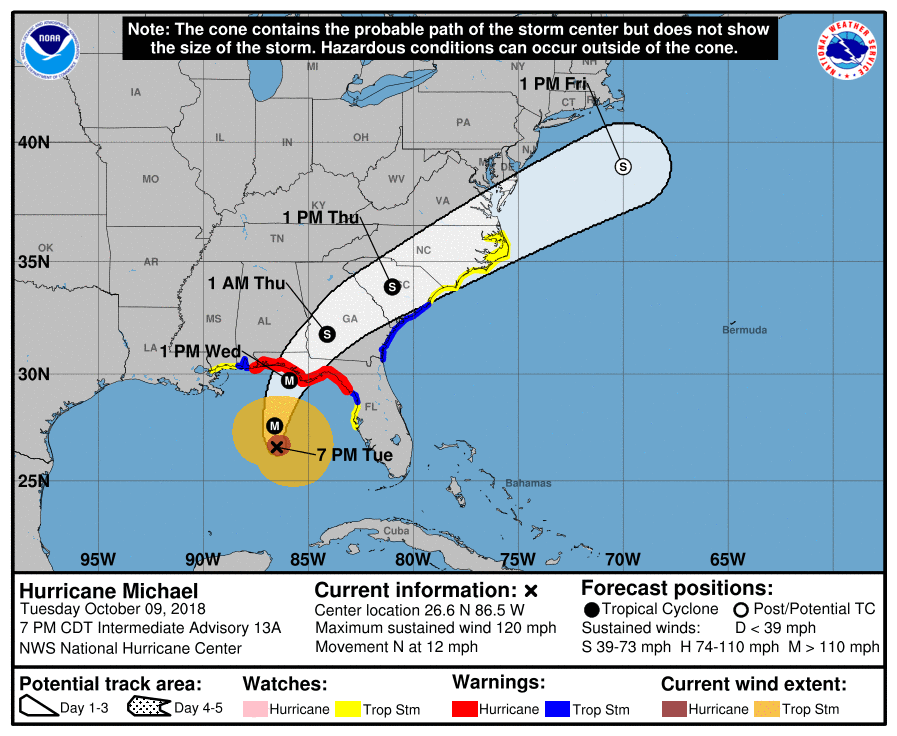 Several hospitals are closing ahead of the storm in Okaloosa County, Florida.

Destin ER and Eglin Air Force Base Hospital and ER are closed, the county tweeted.

Sacred Heart in Destin will keep its emergency room open, but will not accept new patients.

The docks were empty in Destin, Florida, on Tuesday, a day before Hurricane Michael makes landfall.

The Okaloosa County Sheriff's Office tweeted that they "never like to see the fishing docks on #DestinHarbor emptied of boats."

Florida is opening 34 shelters in preparation for Hurricane Michael, according to a statement from Gov. Rick Scott.

About 3.7 million people were under hurricane warnings in the Panhandle and Big Bend regions, as well as parts of southeastern Alabama and southern Georgia. Tropical storm warnings cover 8.5 million people in four states.

Meredith Johnson shot this video of waves crashing over the seawall in Isles of Capri, Florida, on Tuesday.

"We are located in Southwest Florida, right across from Marco Island, where they eye of the hurricane came on shore during Irma. We are having the residual effects of the hurricane out in the Gulf. We are now approaching low tide but the waves washing over the seawall are as high as 7 to 10 feet," she told CNN.

"I’m not evacuating but watching carefully!" she told CNN.

Water levels rose in Apalachicola, Florida, on Tuesday, even before high tide moved in.

Christina Nabors, manager at Water Street Hotel & Marina in Apalachicola, said the water moved up to the base of the hotel, two hours before high tide.

"This is not normal, not normal at all. I have never seen it this high," she said.

Streets were empty and businesses were boarded up in Panama City Beach ahead of Hurricane Michael.

This video shows what it looks like in Panama City Beach:

At least 22 counties have issued evacuation orders ahead of Hurricane Michael, according to Florida Emergency Management.

These counties have issued mandatory evacuations:

Nine counties also issued voluntary or phased evacuations. They are...