Our live coverage has ended for the day. You can read more of our winter storm coverage here.

"Yesterday, President Joseph R. Biden, Jr. declared that a major disaster exists in the State of Texas and ordered federal assistance to supplement state and local recovery efforts in the areas affected by severe winter storms beginning on February 11, 2021, and continuing," the White House said in a written statement on Saturday.

Biden already approved an emergency declaration for the state last weekend, but the major disaster declaration would allow the Federal Emergency Management Agency to provide more resources and assistance, including, for example, supplementing insurance to help individuals with uncovered costs or other costs to make homes habitable.

"Assistance can include grants for temporary housing and home repairs, low-cost loans to cover uninsured property losses, and other programs to help individuals and business owners recover from the effects of the disaster.
Federal funding is also available to state and eligible local governments and certain private nonprofit organizations on a cost-sharing basis for emergency protective measures and hazard mitigation measures statewide."

Biden met with acting FEMA Administrator Bob Fenton on Friday and expressed his intent to sign the declaration, which stems from a request by Texas Gov. Greg Abbott.

Across Texas, millions have been without access to power this week, leaving them in the dark with no heat and water.

Hear their first-hand stories of how they fought to stay warm, struggling with burst pipes and searching for shelter.

An unprecedented winter storm left four million people without power across Texas this week, and put nearly half of the state's residents under a boil-water advisory.

Much of the state is still dealing with near-freezing temperatures and officials are warning some lingering power outages could drag on for days.

Here's a look at the latest developments:

While much of the power in the state has been restored, residents continue to face freezing temperatures and water shortages due to overwhelmed water systems and leaks caused by frozen pipes.

President Biden has declared a state of emergency, which makes people eligible for federal assistance. Still, the need for help is immediate as many struggle to find shelter, food and warmth in these dangerous freezing conditions.

You can donate to any of the organizations listed by clicking this link or the button below:

Impact Your World will continue to update this list as more organizations respond.

Temperatures across the southern Plains and Texas are below freezing right now for many locations.

This has prompted hard freeze warnings to be issued for over 10 million people from south Texas to Mississippi until 9 a.m. CT this morning. 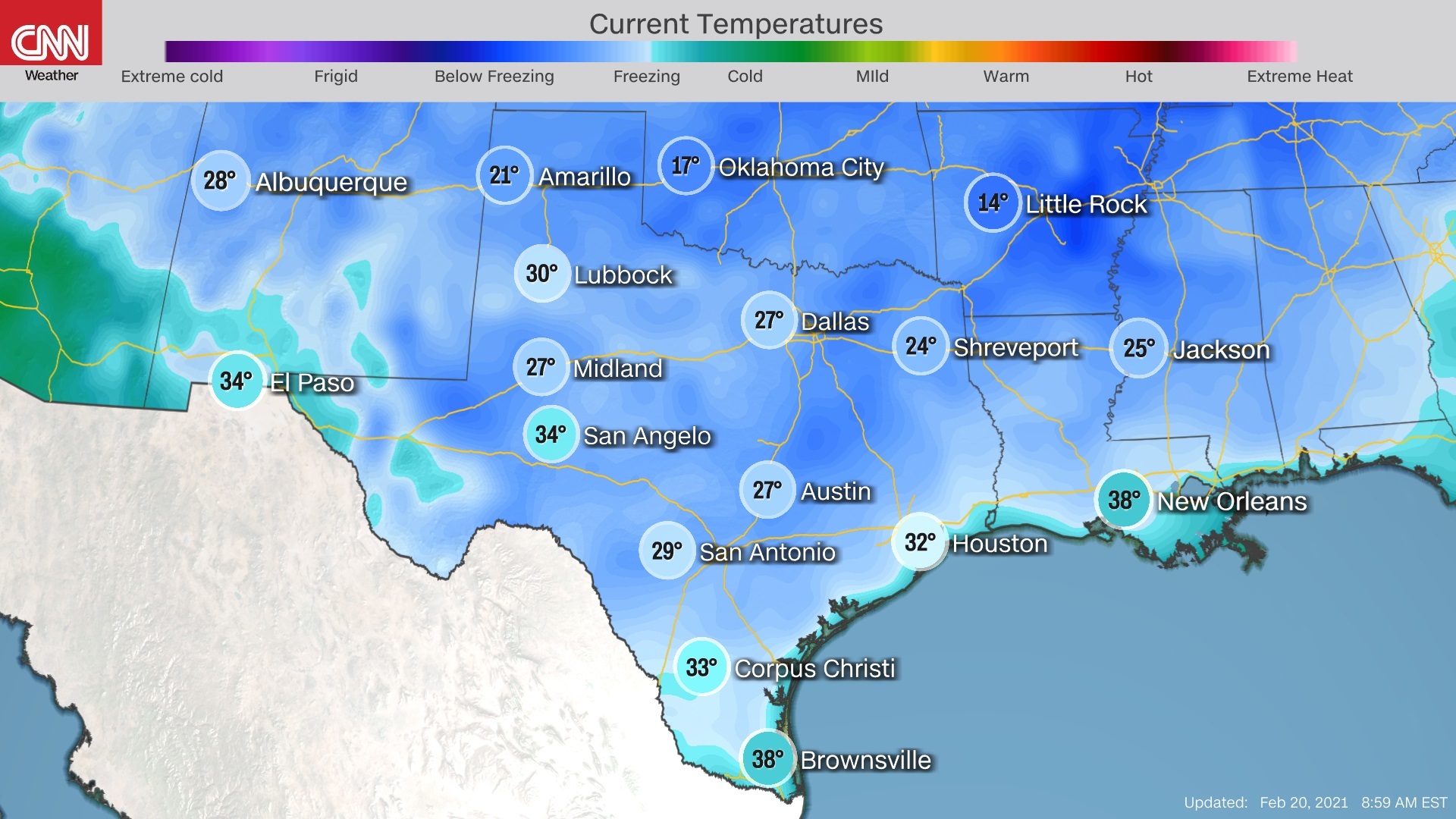 Over 30 daily low temperature records are also possible across the region this morning.

This will be the last frigid morning across the state as temperatures are forecast to climb into the 50s and 60s by this afternoon. 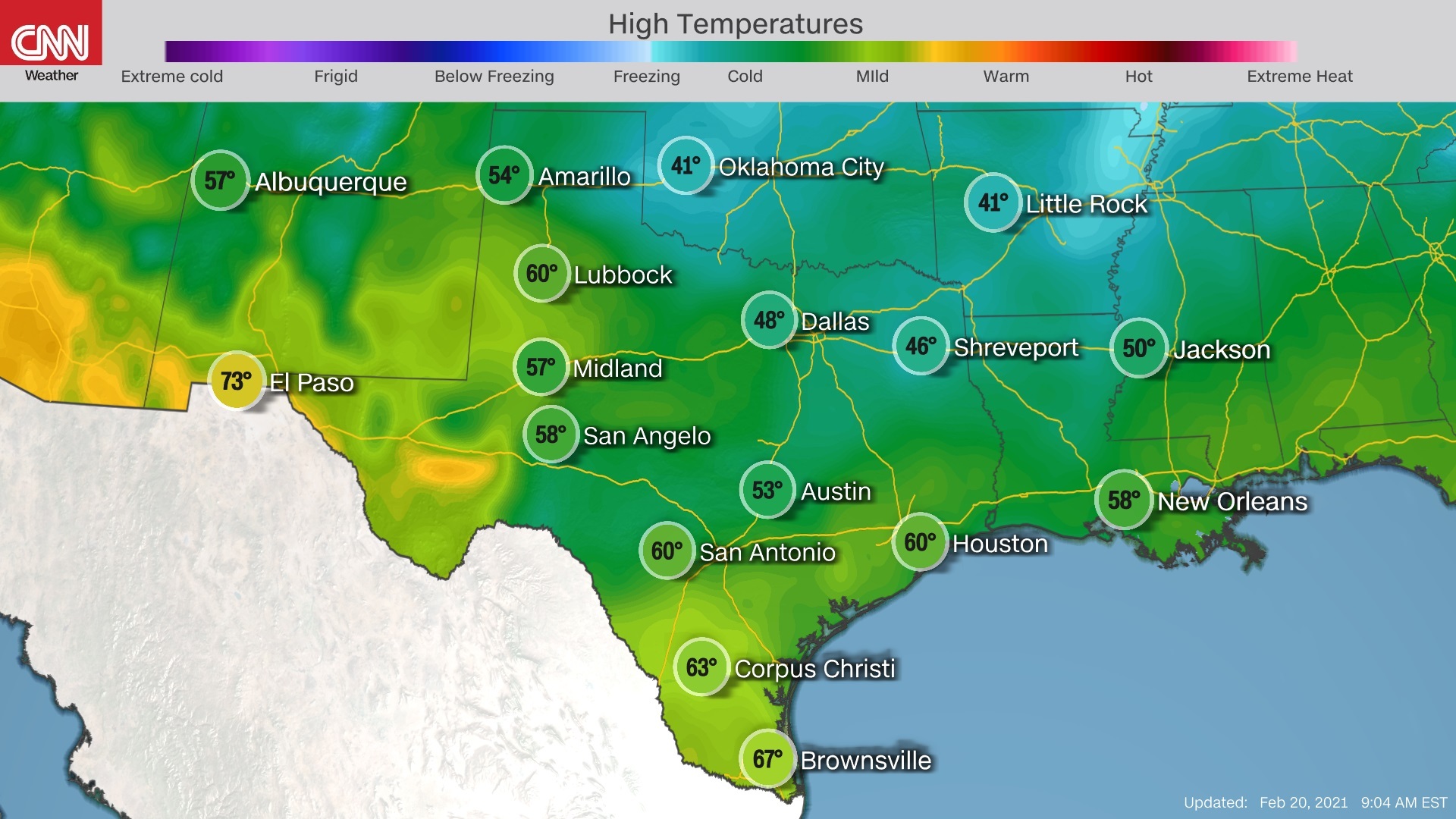 More than 15.1 million people have been impacted by water disruptions in Texas as of Saturday morning, according to Gary Rasp, Media Relations Specialist for the Texas Commission on Environmental Quality.

In a statement emailed to CNN, Rasp said that more than 1,300 public water systems have reported service disruptions due to weather.

"As of 7 a.m., more than 1,300 public water systems have reported disruptions in service due to the weather, affecting more than 15.1 million people, many of them leading to Boil Water Notices."

"189 counties in Texas are affected" by the disruptions, Rasp added.

Hospitals in Texas are grappling with a series of issues, from burst water pipes to supply chain disruptions, due to severe winter weather across the state, the Texas Hospital Association said Friday.

Many hospitals don't have running water or have burst pipes, low pressure and boil water notices, according to a statement from Carrie Williams, a spokeswoman for the association.

Hospitals also have staffing issues, as some employees have had to stay on site to care for patients, putting a strain on the hospitals' supply of food, linens and water.

Other supplies and medication stocks are running low, although there are some supply trucks moving today, Williams said.

"Hospitals are ready for anything. But this was a sprawling natural disaster that hit us statewide and arrived on top of the pandemic," Williams said.

Many of these issues are faced by a pair of Houston community hospitals, who have been struggling with water and power woes stemming from the freezing temperatures and winter storms.

"You've seen this year that all across the country, people have stepped up and made things happen," Dr. Ben Saldana, the medical director for Houston Methodist's emergency departments, said of the latest crisis confronted by health care providers.

"We are the safety net for our public in the emergency department, our hospitals and doctors or nurses getting together to make sure patients have a safe place and are cared for," he said.

Houston Methodist West and Houston Methodist Baytown hospitals were operating without water until Thursday. Water was back on Friday but there were still issues with low pressure, according to Saldana and a hospital spokeswoman.

"As more of our area hospitals were without power and water, many of their patients ended up at our facilities," Saldana told CNN Friday.

That has meant "kind of bifurcating the ER into an area where Covid is unlikely and an area where it could be possible," he said. "As the volume of dialysis patients increased, this became very difficult. Five out of six patients that need dialysis three times a week had no place to go this week. And we are still struggling with that ... It's become a very difficult proposition for those patients."

The pandemic had forced the Houston hospitals – like many around the country – to operate in crisis mode most of the past year.

Covid-19 vaccinations have been delayed across many hospitals and public health partners due to the weather and shipping delays.

Patients who were discharged have stayed in hospital lobbies because they either don't have transportation to return home or can't return home due to power outages, according to Williams.

There is also a delay in trash pickup due to vendor issues, Williams said.

"All our hospitals are doing some elective procedures, but we are on our way to being fully operational," she added. "Covid vaccine administration is full speed ahead at all Houston Methodist sites."

The brutal temperatures, ice and snow once had power out for millions of Texas, but as of early Saturday morning, only about 85,000 people in the state were left in the dark, according to PowerOutage.US. However, more than half the population – more than 14.9 million people – had disruptions in their water service as of Friday, according to Tiffany Young, a spokeswoman for the Texas Commission on Environmental Quality.

Texans will get some relief from the cold Saturday, although many in the state are still without basic utilities.

Saturday morning temperatures may be as low as 20 degrees for many inland locations, including Dallas and College Station, but the welcome return of onshore winds and full sunshine will warm the state into the 50's and 60's in the afternoon, CNN meteorologist Derek Van Dam said. Most of the state will stay above freezing after that initial thaw.