The latest on Covid-19

Texas officer shoots woman who said she was pregnant

Our live coverage has ended. Scroll through the posts below to read more or follow CNN.com.

The 45-year old woman who was killed during an encounter with a Baytown police officer Monday night was not pregnant, police Lt. Steve Dorris said.

"I'm walking! I'm actually walking to my house!" the woman screams at him. She later says the officer is "harassing" her.

The video shows the officer apparently trying to handcuff the woman, but she breaks free. The officer then fires his Taser stun gun, and the woman slowly drops to the ground.

A scuffle ensues. The woman keeps yelling "Why?" but the officer isn't heard answering.

As the officer keeps trying to arrest the woman, she flails her arms and yells, "I'm pregnant!"

The struggle continued, and according to Baytown police, the woman "was able to gain control of the Taser and used it on the officer."

In the video, the woman appears to reach for the officer, who stands back and fires five shots toward her.

The Baytown Police Department released its version of the events that led to the shooting death of a 45-year-old woman Monday night, explaining how the encounter that started over outstanding warrants ended in her death.

In a news release, the department said the police officer saw the woman, who he knew from previous encounters had outstanding warrants, and attempted to arrest her.

Police say that's when a struggle ensued, forcing the officer to deploy his department issued taser at the woman.

The news release also states that as the officer attempted to handcuff the woman, she gained control of his taser and used it on the officer. The officer then drew his duty weapon and fired multiple rounds at the woman, striking her at least once.

The officer tried to give aid to the woman immediately after the incident, however, she succumbed to her injuries and was pronounced dead at the scene, according to police.

The officer is an 11-year veteran of the Baytown Police Department and has been placed on paid leave, which is standard protocol. Baytown Police detectives along with investigators from the Harris County District Attorney’s Office are investigating the incident.

The Baytown Police Department is asking the person who recorded last night’s deadly shooting at the Brixton Apartment Complex to come forward.

During an overnight media briefing, Lt. Steve Dorris told reporters that the individual is now an eyewitness to the shooting and they would “love to talk to them."

Dorris also stated that it was “unfortunate” that the individual posted the footage to social media, calling it "extremely disrespectful."

“It’s unfortunate that somebody take a tragic incident like this and start posting it on social media. That’s extremely disrespectful for everybody involved,” Dorris said.

Floyd Rubin, who shares two children with Pamela Shantay Turner, tells CNN that police have not shared any details with his family about the shooting. 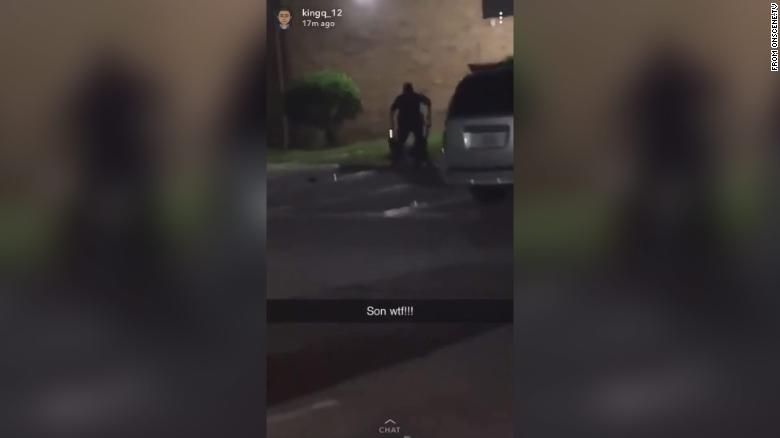 A police officer from Baytown, Texas, is on paid administrative leave after he shot and killed a woman at an apartment complex Monday night when he attempted to arrest her for outstanding warrants.

The altercation — which was captured on video and from a witness then shared on Snapchat — shows the officer attempting to arrest the woman in a parking lot at the complex.

In the 39-second clip, the 45-year-old woman is heard telling the officer that he “is harassing her."

About 17 seconds into the clip, the officer is then seen firing a taser at the woman. As the woman laid on the ground, she yelled “I’m pregnant” to the officer. Seconds later, the officer fired his weapon five times. At least one of the rounds struck her, killing the woman.

A family member identified the woman as Pamela Shantay Turner.

The video, which you can view below, contains disturbing imagery. Viewer discretion is advised.