The mother of Uvalde school shooter Salvador Ramos said she was in shock and asked for forgiveness after her son shot and killed 21 people at an elementary school in Texas on Tuesday.

"I have no words, I have no words to say, I don't know what he was thinking. He had his reasons for doing what he did and please don't judge him. I only want the innocent children who died to forgive me," Adriana Martinez told CNN affiliate Televisa.

"He was very quiet. He was himself. He didn't bother anyone — he didn't do anything to anyone," she told Televisa.

His grandfather told CNN on Thursday that he knows many of the families affected by the massacre.

“Some of them are my friends, and I’m going to have to face them some day,” Rolando Reyes said.

Reyes’ wife was the first victim that day, shot in the face at their home before Ramos drove to Robb Elementary School and killed 21 people.

A bullet pierced the jaw and upper cheek of his wife, Reyes said, and she will need significant reconstructive surgery at a hospital in San Antonio.

The shooter’s grandmother “did everything for him,” Reyes said, including cooking and picking him up from late work shifts at a fast-food restaurant, and he does not understand why the 18-year-old would lash out at her.

Reyes is the father of Ramos’ mother, who has been crying so much since the shooting that one of her eyes is almost swollen shut, he said.

WATCH: Gunman's mother speaks out: 'Forgive me, forgive my son'

Some Republicans have an odd way of not politicizing the horrific Texas school massacre.

Despite accusing Democrats of constantly trying to manipulate mass shootings for political gain, several senior GOP figures — including ex-President Donald Trump — are expected to give speeches at the National Rifle Association-Institute for Legislative Action's annual leadership forum on Friday.

The NRA is the highly politicized body that spent decades radicalizing the GOP on guns and tearing down moderate firearm laws, resulting in a torrent of high-powered weapons finding their way into private hands — like the kind an 18-year-old gunman bought legally and used to kill 19 children and two teachers on Tuesday.

And the group's annual meetings are taking place in Houston only three days after and about 275 miles to the east of the spot where innocent children were gunned down in their classroom in the city of Uvalde. The assault was both shocking in its barbarism but not at all surprising as it was just the latest mass shooting in America's endless cycle of gun violence. 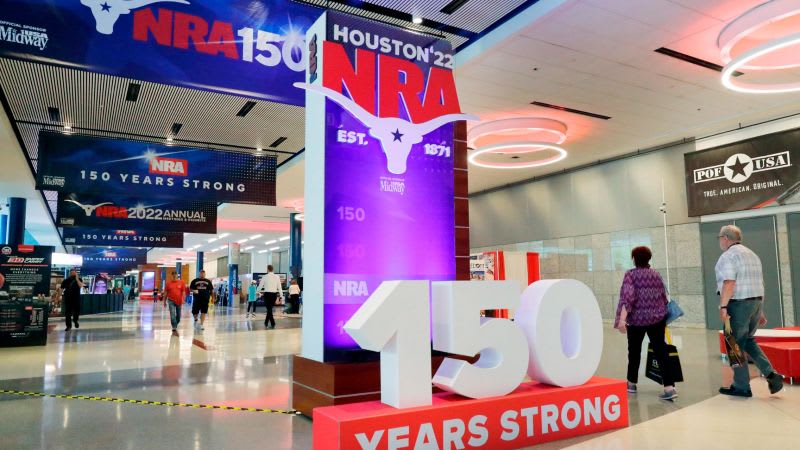 US Secretary of State Antony Blinken addressed the school massacre in Texas for the first time publicly Thursday, calling it "unfathomable."

"I have to tell you,  it's really hard to look at the images on TV of these children, ten years old, each with their own story. Each so vibrant, each with so much ahead of them," Blinken said at an event celebrating Eid at the State Department.

"And as a parent, as I suspect many of you are, you put yourself in the place of their parents. And it's unfathomable. It's just unfathomable," he said.

Blinken said they "all have them in their hearts," and referenced a previous speaker's comment about "the need to recommit ourselves to empathy."

A spokesperson for Daniel Defense, the manufacturer of a firearm used in the Robb Elementary School shooting, told CNN the company has no plans to attend this weekend’s NRA meeting in Houston, Texas.

“Daniel Defense is not attending the National Rifle Association (“NRA”) meeting due to the horrifying tragedy in Uvalde, Texas where one of our products was criminally misused. We believe this week is not the appropriate time to be promoting our products in Texas at the NRA meeting,” Steve Reed, vice president of marketing, said in an email.

The company also issued a statement on its website calling the shooting an “evil act.”

“We are deeply saddened by the tragic events in Texas this week,” the statement said.

Daniel Defense said the company will cooperate with “all federal, state, and local law enforcement authorities in their investigations.”

“We will keep the families of the victims and the entire Uvalde community in our thoughts and our prayers,” the statement said.

The parents of the victims from Robb Elementary School in Uvalde deserve a complete accounting of what happened during the shooting, Texas state senator Roland Gutierrez said Thursday.

“I’ve talked to the troopers, I’ve talked to the (Texas) Rangers, they suggested that over the course of the next 24 to 36 hours we should have a full-blown report,” Gutierrez told CNN’s Don Lemon.
“Listen, this isn’t rocket science, everything is on video in there. And we deserve to know what happened, these parents deserve to know what happened.”

Gutierrez, a Democrat whose district covers Uvalde County, said nothing he has seen so far has been “satisfactory.”

Gutierrez said he knows “there was a failure here,” and that he has seen video of law enforcement entering the building and well as the standoff that took place.

“I don’t want to 'Monday morning quarterback' this thing but at the end of the day we have to find out for the future, so that this never happens again, what kind of failures happened," he said.
“And I feel in this situation standing back was not the thing to do.”
“There’s no way in the world that an 18-year-old kid should access a militarized weapon like it happened in this situation,” he said. “And I put that on people that are in power in Texas.”

Texas Gov. Greg Abbott — who was scheduled to speak Friday on the first day of the National Rifle Association's annual meeting — is canceling his in-person appearance to attend a press conference on the school shooting in Uvalde.

Abbott will speak to the convention instead "through prerecorded video," spokesman Mark Miner told the Dallas Morning News Thursday.

The NRA event takes place in Houston, more than 250 miles away from Uvalde. Several scheduled speakers and performers have bowed out since Tuesday’s deadly school shooting.

Abbott is now scheduled to be at a 3:30 p.m. CT news conference on the school shooting Friday, which his office says will come after “a briefing with state agencies, local officials, and members of the community.”

Layla Salazar, 11, has been identified as one of the victims in Tuesday’s shooting, her family confirmed to CNN’s Gary Tuchman.

Her father, Vincent Salazar III, and her mother, Melinda Alejandro Salazar, said Layla was an active child who loved to run, film TikTok videos and dance. Her grandfather,

"Our hearts are shattered because of this," her grandfather Vincent Salazar Jr. said.

Her family also told CNN that Layla loved to swim in the river with her two big brothers.

As a parent, it can be gut-wrenching to discuss violence happening across the country with your kids, and even harder when the violence is happening in our schools. In the wake of the Texas school shooting, what questions are your school-aged children asking and how are they feeling?

Please call in with your child and leave us a voicemail at (404) 618-1992 to let us know your thoughts and what you are discussing with your children.

Each voicemail can be three minutes in length. All or part of your call may be used by CNN on television and/or digital as part of our coverage.

Please include your name, contact information and where you're calling from. By calling in with your child, you are representing that you have authority to consent for your child's voice and statements to be used by CNN on television and/or digital and are agreeing to such use.

Thank you for weighing in with your important perspective.

Questions remain over the police response to Tuesday’s deadly mass shooting at an elementary school in Texas as investigators are "still grabbing a lot of information" about what happened, according to one official.

"We're going to find out. With all the different agencies that are involved, we're working every angle that's available. We won't stop until we get all the answers that we possibly can," Victor Escalon, South Texas regional director for the Department of Public Safety, told reporters Thursday.

Read more about what we know — and don't know — about the shooting here.