Frank DeAngelis, who was principal of Columbine High School in Colorado in 1999 when two gunmen killed 13 people on campus, told CNN a network of educational leaders who have experienced gun violence is available to help those at Robb Elementary School after Tuesday's shooting.

"There are about 29 of us that have actually been involved in shootings within our community. So, we reach out and we have guides just to help them wherever we can. And it's not a one-time phone call," DeAngelis said of the group, the Principal Recovery Network.
"I will be there every step of the way to help them just as people helped me in our community."

DeAngelis said after the Columbine shooting, Bill Bond, who was then-principal of Heath High School in Kentucky when a gunman opened fire and killed three schoolmates in 1997, called him to offer his support and guidance.

"He said, ‘Frank, you don’t even know what you need at this point but just keep my number.’"

DeAngelis has since called multiple schools after mass shootings to provide the same support, he said, and has reached out and left a voice message for the principal of Robb Elementary.

"I made a comment right after Columbine — I said, you know, I just joined a club in which no one wants to be a member. And I just want to reach out."

As part of the National Association of Secondary School Principals, members of the Principal Recovery Network "reach out directly to their colleagues to provide much-needed support, share the combined wisdom of their experience with the larger principal community through various outlets, assist schools during recovery, and advocate for national school safety enhancements and violence prevention programs," according to its website.

DeAngelis credited improved police response times and the introduction of lockdown drills over the last two decades, but stressed that more must be done.

"I think back to Parkland, which occurred back on Valentine's Day 2018, and everybody was fired up and we've got to do things. And the students were stating, ‘you adults have let us down, we need to do something.’ Now four years later, we're having these same discussions. It's time to stop talking and start doing things.
"And I know last night, every parent who hugged their child as they came home last night, they put them in bed just wondering, you know, there's no guarantees. And we can't allow this evil to win out."

The fatal shooting of 19 children and two adults on Tuesday in Uvalde, Texas, has shocked the country, evoking memories of other tragic school shootings such as Columbine, Newtown and Parkland, and renewing calls for Congress to do something.

But the response to those calls from many Republican lawmakers is the same now as it pretty much always is: The country should not have stricter gun control.

Why do these Republicans refuse to act? Beyond the fact that many believe stricter gun control would not prevent such mass shootings, a look at the data reveals that there is simply no political pressure to do so.

While there are certainly some Americans who want stricter gun control, the public at large is far more split on the issue than a lot of commonly cited polling data would have you believe. 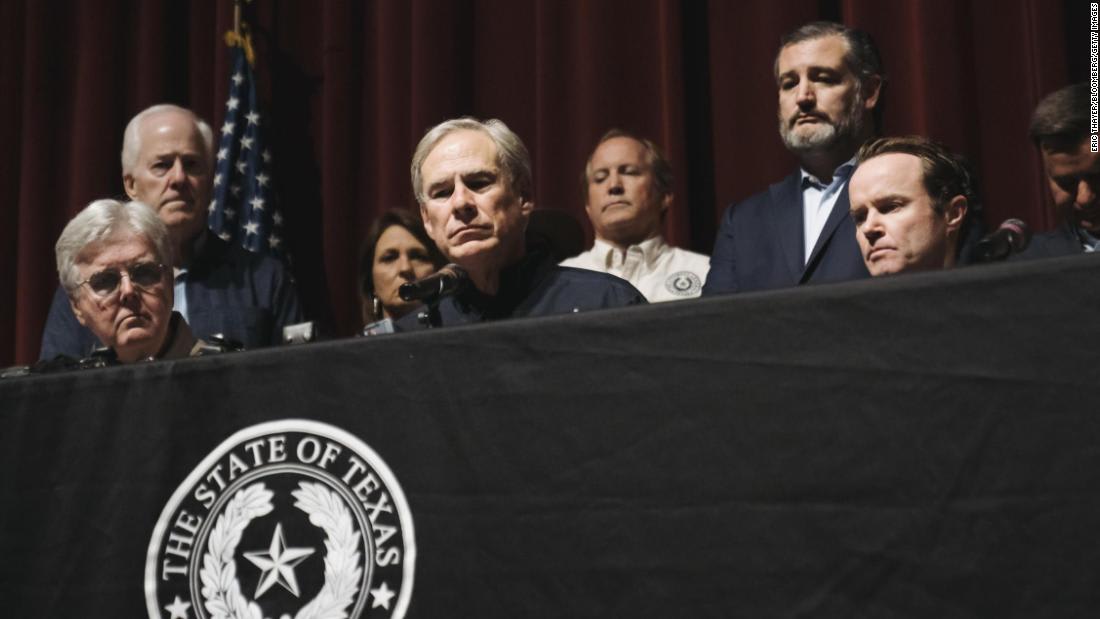 The National Rifle Association is set to hold its 2022 annual meeting in Houston on Friday, bringing together its top brass and several notable conservatives, including former President Donald Trump, for the first time in three years.

The NRA's annual meeting was canceled in 2020 and 2021 due to the coronavirus pandemic, but this year the organization is moving ahead with its plans, holding the meeting at a time when both gun rights and the organization itself have come under intense scrutiny, especially after a shooting at an elementary school in Uvalde, Texas, left 21 dead. 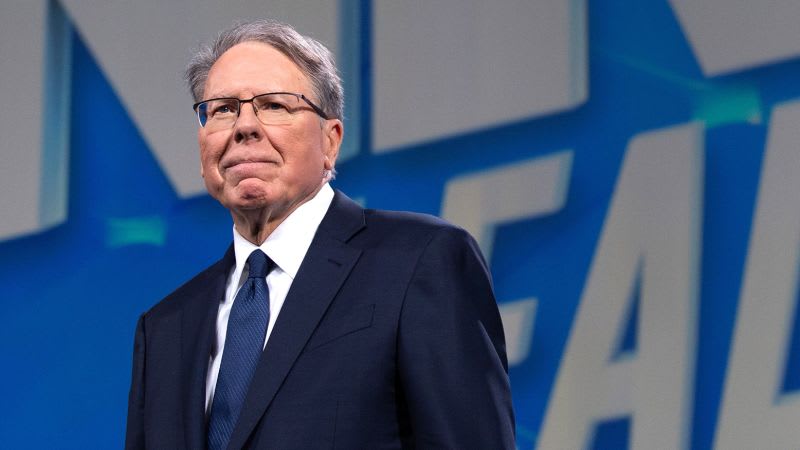 It's not that America can't stop its bloody sequence of mass killings. It's that it lacks the national cohesion and common will to do so.

The elementary school massacre in Texas underscored that the world's most powerful nation can't even ensure that its most vulnerable — young children — are safe from violent death at their desks. A more stunning failure of government would be hard to find.

A deep political and cultural estrangement on guns — caused principally by the right's blocking of efforts from Democrats and moderate Republicans to pass even modest safety measures — is boiling up again over Tuesday's shooting.

Mass killings are a sickeningly familiar background noise to daily life in the US, but the latest school bloodbath, which killed 19 children and two teachers, came as an especially devastating blow. It rekindled the sense of dread millions of American parents feel when say goodbye to their kids at school drop off.

And it will further scar a generation of students haunted by the perpetual fear of a school shooting -- a frightful vision for young minds that was only alleviated by Covid-19 pandemic virtual learning, which traumatized many of them in other ways. 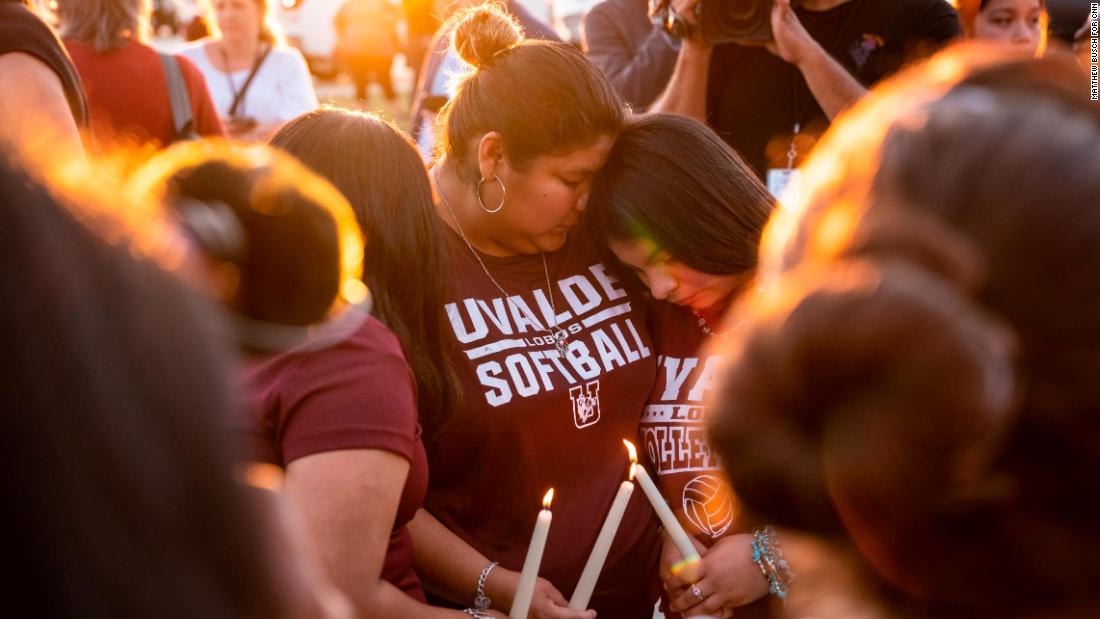 Analysis: America's divide on guns is keeping schoolchildren in danger

Hundreds of people gathered at a vigil Wednesday night at the Uvalde County Fairplex, a community arena, for the victims of the school shooting at Robb Elementary.

With 21 dead and 17 others injured, the attack Tuesday was the deadliest school shooting in almost a decade and shook a nation still reeling from a mass shooting just 10 days ago.

Nevaeh Alyssa Bravo, 10, has been identified as one of the victims killed at Robb Elementary, a family member told The Washington Post.

Her cousin, Austin Ayala, told The Post that she put a smile on everyone’s face and that her family is devastated.

Her grandmother, Esmeralda Bravo, attended a vigil in Uvalde on Wednesday night. She was photographed by CNN holding an image of Nevaeh.

Funeral services for the 10-year-old are pending, according to an online obituary by Hillcrest Memorial Funeral Home.

That was the front-page headline on the Dallas Morning News on Wednesday morning after 19 children and two teachers were killed by an 18-year-old gunman.

It's a sentiment many people are feeling. The shooting at Robb Elementary School in Uvalde, Texas is the third mass shooting this week, according to the Gun Violence Archive, and comes days after high-profile shootings in Buffalo, New York and Orange County, California. With almost two dozen victims, it's one of the largest mass school shootings in the last decade.

"These are kids that are under 10 years old, a lot of the time. I don't even know how they begin to process it, I don't know how anybody of any age begins to process this," said David Hogg on CNN's New Day.

"This is something that never should have happened," said Hogg, who was a student at Marjory Stoneman Douglas High School in Parkland, Florida, when 17 people were killed by a gunman in 2018.

As people across the country mourn, here's what parents, educators and students who lived through past school shootings are saying in the wake of what has become a national epidemic. 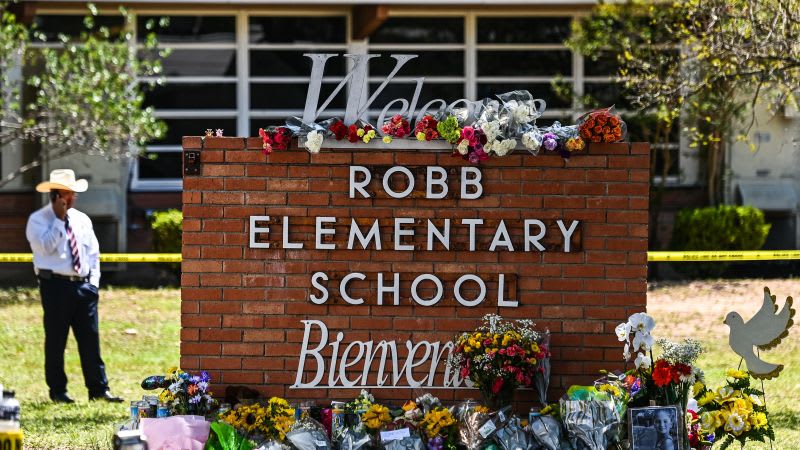 As the town of Uvalde in South Texas mourns the killing of 19 students and two teachers at an elementary school, a vigil was held for the victims at a community arena Wednesday night.

"Amazing Grace" was played as those in attendance wept and hugged.

The mass shooting on Tuesday has again spurred statewide and national conversations over gun control, following on two others over a two-week period —at a supermarket in Buffalo, New York, and a church in Laguna Woods, California.

Here are the latest developments in the Uvalde shooting: