Our live coverage of the storm has ended, but you can track the snow and ice here

Things are going to thaw in Texas but it won't happen as fast as some people would like, especially those with frozen pipes. Some areas might creep above freezing today and tomorrow.

But getting to 33 degrees won't do anything for a long time to frozen pipes.

"Think how long a turkey takes to thaw in a 37-degree fridge before Thanksgiving," CNN meteorologist Chad Myers says. "You need to look at when the dew point gets above 33 and fission can cause the pipes to sweat."

When pipes eventually start to thaw, be prepared to shut off the water to your home, as the pipes might have cracked where they froze.

Here is what we expect cities hit hardest to get to the freezing point:

The catastrophic winter storm is slowly moving northward today after dumping snow and ice across parts of the southern US that rarely see this kind of winter weather.

The storm has shattered snow records in some southern cities, giving these places the most snowy days in a row or the most inches of snow they've ever had.

Here's a look at how things stand in some key southern cities.

Texas resident Philip Shelley has been living without power or heat with his pregnant wife and 11-month-old baby.

“The leaders that we rely on don't have answers. So we're just left sitting in a cold, dark room in the middle of the night with a crying baby and an in-pain wife. That's what hurts the most. There's nothing we can do besides sit and wait,” he said.

With his wife eight months into pregnancy, he says she is in pain.

“She's tougher than nails. And I feel bad for her because she's in pain and all she talks about is wanting a warm bath. And we can't even have that,” the Fort Worth resident said. “I don't like seeing her in pain. As a man, it's hurtful to see my family struggling and I can't do anything about it.”

“My daughter is on formula. I can't trust the water if it's not safe to get that to her in the formula,” he added.

As the power crisis continues, state officials and leaders are blaming one another and criticizing each others policies. Shelley expressed frustration at the finger-pointing and the lack of answers or action.

“They need to point the finger at themselves. Because they failed. We didn't fail and we're the ones suffering,” he said.

Mega sites in Burlington, Middlesex and Morris counties have already closed and appointments are being rescheduled for either Friday or Saturday, depending on the site, Murphy said. Bergen County will close its site at 10 a.m. ET Thursday and is working on contacting individuals and rescheduling appointments.

Atlantic and Gloucester County sites remain open, Murphy said, though Gloucester’s site is “under consideration” to close at some point depending on weather outlook. The statewide vaccination call center will remain operational through the duration of the storm.

Murphy also said there are vaccine supply chain issues, and while the severity is yet to be determined, he said the state is taking a “conservative expectation” that “anticipated deliveries will not arrive as scheduled.”

New Jersey is making preparations to use existing inventory to satisfy as many appointments as possible, but Murphy conceded that "not all (sites) will be able to do this."

Current snowfall forecast estimates range from 1-4 inches with ice in southern New Jersey to 4-8 inches or more in the northern part of the state, Murphy said. 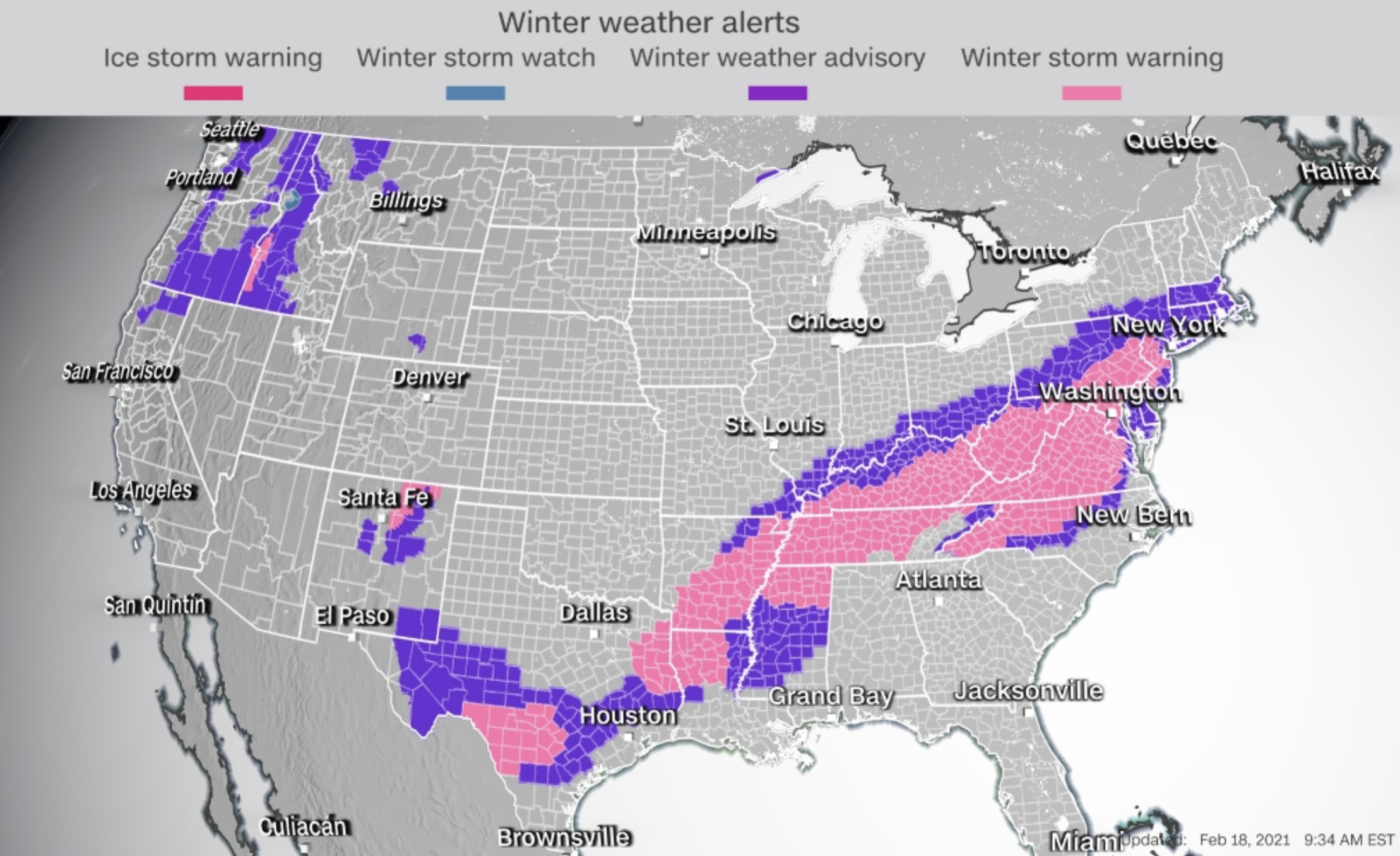 As the winter storm that caused power outages in Texas and dumped snow and ice across much of the Southeast US moves northward, more than 100 million people stretching from Texas to Massachusetts are under a winter storm warning or winter weather advisory.

Washington, DC, will be coated in snow, sleet and freezing rain, while New York could see six to eight inches of snow in the afternoon.

Snow is expected in many New England states today through tomorrow, according to the National Weather Service.

Ohio Gov. Mike DeWine issued a proclamation Wednesday declaring a state of emergency in Lawrence County, "due to dangerous and damaging conditions caused by this week's severe winter ice storms."

The state's southernmost county has experienced ice, snow, and debris on roadways which is "impeding the ability to restore utilities and access emergency services," the governor said in a statement.

Lawrence County commissioners had declared a state of emergency on Tuesday, following a second round of severe winter weather, according to the Ohio Emergency Management Agency (EMA).

"More than 80% of the population was without power" in Lawrence, EMA said in a tweet.

"With the oncoming snowfall that is expected to complicate the local response, this state of emergency will activate state agencies to assist in clearing debris from roads and with ongoing measures to restore power," DeWine said.

Agencies that have been called to assist include:

Lawrence County is about 144 miles east of the state capital Cincinnati.

A new tornado watch is now in effect from south Georgia into Florida until 4 p.m. ET this afternoon, according to the Storm Prediction Center.

The watch includes the cities of Tallahassee, Panama City, Apalachicola, Albany and Valdosta. More than 1.5 million people are included for the possibility of tornadoes, large hail and damaging wind gusts of up to 70 mph.

This is associated with the same storm system that is producing all of the winter weather from Texas to New England.

Dallas County Judge Clay Jenkins, the county’s director of emergency management, says the fault of the power and water crisis in Texas “lies squarely on Rick Perry and the current Gov. Greg Abbott.”

“They and their team passed the regulations that tell people whether or not they need to winterize. They chose not to tell companies…that they need to winterize,” he told CNN’s Alisyn Camerota. “…They're now trying to blame it on a company called ERCOT that Gov. Abbott hired. They can easily fire that company and hire another one.”

ERCOT, the Electric Reliability Council of Texas, is an independent organization that operates Texas' power grid.

“If they don't take responsibility and fix this and by putting in winterization guidelines for gas lines that are frozen underground and for energy generators that haven't worked because they're not winterized, this will happen again. The fault lies with those two individuals alone,” Jenkins said, adding that the Railroad Commission of Texas also “shoulder[s] the responsibility for not modernizing the gas pipeline system.”

Some background: In a blog posted on House Minority Leader Kevin McCarthy’s website, former Texas Gov. and Energy Secretary Rick Perry said that his home state’s current situation can be traced to “insufficient baseload power,” and claims that he and his fellow Texans will go without power for a longer period if it keeps the federal government from over-regulating their power grid.

“Extreme weather in Texas and around the world now is a completely predictable event,” Jenkins said.

“So to say that you're fine with three days of power outage, and that's the price you'll pay, is a false choice,” he added on Perry’s statements.

About 23,000 people in Dallas County have been without power for three days, Jenkins said, and crews are working to restore it.

“What we have now is lines and transformers that are frozen during the time the power was out, that after they were re-energized, they were found to be faulty,” he explained.

Dozens of people across the United States have died from a spate of winter storms — and now the weather is threatening to pummel the mid-Atlantic and Northeast with snow and ice.

More than 100 million people stretching from Texas to Massachusetts are under a winter storm warning or winter weather advisory.

The cold weather that has brought blankets of snow and widespread power outages in Texas as well as Oklahoma is expected to move east Thursday, bringing with it a half an inch of ice to parts of North Carolina and Virginia, according to CNN meteorologist Taylor Ward.

A tornado watch is in effect for parts of the Florida Panhandle, Southwest Georgia and Southeast Alabama until 8 a.m. EST. Washington, DC will be coated in snow, sleet and freezing rain by Thursday morning, while New York should see six to eight inches of snow in the afternoon, Ward said.

The weather is not the typical winter cold. Some of those who have already been impacted by the storms have spent days without power and water, and likely won't see temperatures rise above freezing until next week.