Millions are still without power as winter storms continue

Our live coverage of the storm has ended, but you can track the snow and ice here.

Millions of Texans woke up to another day without power due to winter storms that have swept most of the nation the past few days.

Nationwide, a total of 3,796,707 customers are without power according to data from PowerOutage.US.

A driver's best bet is to stay home when wintry weather coats the roads in snow and ice. For those who must go out, it's important to plan. AAA recommends motorists pack a winter driving kit that includes:

Here's some advice for when you're out on the road:

Parking: Try to ease your vehicle out of parking spaces without spinning the wheels. Drive back and forth for several feet in either direction to clear a path. Spread sand or salt near the wheels if additional traction is needed.

Ice on your vehicle: Iced-over vehicles can limit driver visibility, and ice flying off cars can be hazardous to fellow drivers, so de-ice vehicles before driving.

Driving: If you have to drive in conditions with low visibility, go slowly with your headlights on low beam, AAA advises. Allow at least double the usual following distance between cars. Never use cruise control on a slick surface.

Steering around an obstruction is often safer than braking suddenly at speeds above 25 mph on a slippery surface, according to AAA's pamphlet "How to Go on Ice and Snow" (PDF).

In case of skidding, steer in the direction you want the front of the car to go, keeping your eyes on your travel path. And don't slam on the brakes; you're likely to make it harder to get back in control.

Watch these tips in action:

The dangerous cold outbreak across the Central and Southern US is become noteworthy not just because of the extremely cold temperatures, but also because of the length of time these locations have endured without warming significantly.

Why this matters: The extended cold places even more strain on energy resources as buildings are unable to warm up naturally.

Here is a sample of cold stretches for some locations and where they rank historically:

Jordan Orta found herself sleeping in her car last night with her two-year-old son because it got so cold without power inside her home in San Antonio, Texas.

“A lot of people are losing water in my area and were told that they would be shutting water off for the whole city with no idea when it would be back so we filled up pitchers and tubs of water,” she told CNN. “I went to HEB yesterday and there was no water left so if we lose water it’s all we got until who knows when.”

Orta got power back briefly this morning and were able to briefly warm up until it was shut off again around 8:45 a.m. CT.

“We have a gas stove so we’ve been able to warm up leftovers and cook what we have,” Orta said.

The pair have been eating lots of sandwiches, she said. Her son “doesn’t really know anything is wrong, bless his heart. All he knows is that sometimes the lights don’t work and we have to use the flashlight to go potty. It’s amazing and sad at the same time.”

“He’s not really cold because he’s a busy body and he’s fully dressed. He still wants to go outside and play in what’s left of the snow," she said.

“HEB shelves were bare like this was the store of Covid again,” she added. “No meat, barely any non-perishables left. The lines were all the way down aisles and wrapped around some stores.”

Orta shared the following photos of how they are conserving water.

The Electric Reliability Council of Texas, known as ERCOT, said some generation is slowly returning and they “hope to reduce outages over the course of the day” today.

“We know this is hard. We continue to work as quickly and safely as possible to restore power. We gained some MWs (megawatts) overnight but are back to 14,000 MW of load shed; lost east DC-tie imports due to Midwest power emergency. We hope to reduce outages over the course of the day,” ERCOT said in a tweet. The company which controls most of the state's grid.

Earlier this morning, the agency said they restored power to 600,000 households overnight, but 2.7 million households remain without power.

Last night, ERCOT cited frigid temperatures as an obstacle to restoring the load.

“ERCOT is restoring load as fast as we can in a stable manner. Generating units across fuel types continue to struggle with frigid temperatures,” they tweeted.

Texas Gov. Greg Abbott has called for an investigation into ERCOT. The group's CEO on Tuesday defended their controlled outages, saying they "kept the grid from collapsing" and sending the state into a complete blackout.

Across the state: AEP Texas, which serves cities such as Corpus Christi and Abilene, says ERCOT has ordered them to shed load again.

“OUTAGE ALERT: @ERCOT has issued an order to AEP Texas to shed load once again. Please prepare for more power outages and expect current power outages to continue. AEP Texas stands ready to restore electric service as soon as power is available. #WeAreAEPTexas,” the electric company said in a tweet. 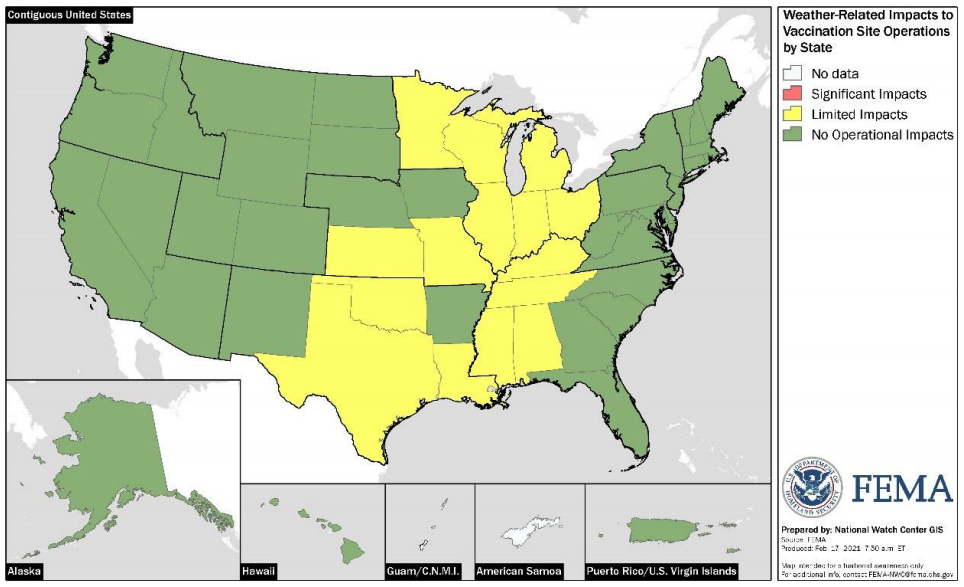 This FEMA map, up to date as of this morning, shows states that “have reported COVID-19 vaccination site closures due to the ongoing storms and will reschedule appointments once the storms have passed.”

None of the states are in the red, which would mean they are having “significant impacts.”

The shipment was scheduled to arrive yesterday, Mahon said.

Mahon tells CNN, the state has notified vaccine providers about the delay and has asked them to reschedule appointments instead of cancelling them.

The state is expecting to receive next week’s full allocation of the vaccine, per Mahon.

Many states across the country continue to deal with extreme cold. In Texas alone, about 2.8 million are still without power, and temperatures are well below freezing across the entire state.

If you lose power, here are some tips to stay safe:

Here are some other things to keep in mind:

If you have low bandwidth, use CNN's lite site to get the latest updates on conditions in your area.

Austin Energy, the city of Austin’s community-owned electric utility, told customers they are facing challenges with restoring power to the city and as a result, “customers should be prepared to not have power through Wednesday and possibly longer.”

“Due to the ice storm, we are now in two emergency events. 1. We still have outages to help maintain ERCOT's electric grid. 2. The ice storm is now causing more outages throughout our service area,” the utility company tweeted.

Austin Energy told people to utilize warming shelters in the city if they need to.

Last night, Austin Energy said ERCOT — the Electric Reliability Council of Texas, which controls much of the state's grid — ordered them to “shed more load” and they are working to meet their “obligations to maintain the state’s electrical grid.”

“Unfortunately, ERCOT is ordering us to shed more load tonight as demand on the grid increases, and those restored customers may again lose power. We are frustrated but we are working to meet our obligations to maintain the state's electrical grid,” Austin Energy tweeted.