UPDATE: L.A. County Sherriffs department confirms the suspect is not dead but is being treated at a local hospital and is in custody. CNN previously reported the suspect was dead, citing two law enforcement sources.

At least six people have been taken to hospitals following a shooting at Saugus High School in Santa Clarita, California.

Here's what we know about the victims:

She called herself "heartbroken" and expressed gratitude for the first responders at the scene.

The junior Senator, who has previously called for gun control reform, also said: "Our children and communities are being terrorized. We can't accept this." 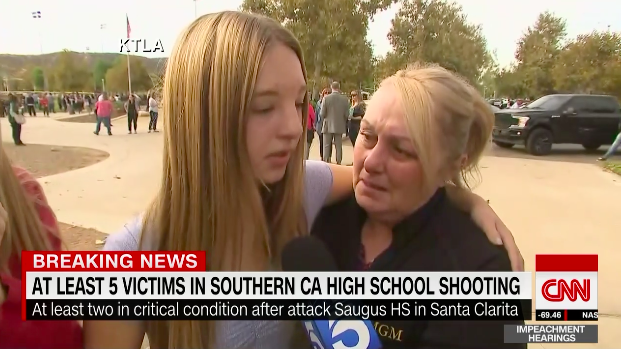 A student from Saugus High School who spoke to reporters outside the school said, "My friends who are still stuck in school, they're hiding in closets."

"They don't know if they're safe or not and they're desperate to know the situation, so we're trying to help them out as best we can," she said.

Another student said they were "texting all our friends and making sure they were safe."

The two students said they heard five shots go off inside the school.

Asked how they responded to the shooting, one of the students said they ran outside.

"We ran through the fence, luckily it was open, and we got as far away from campus as we could," she said.

The suspect in a shooting at Saugus High School is a 15-year-old male, according to a law enforcement official with knowledge of the situation in Santa Clarita, California. The same source tells CNN police are searching that suspect’s home.

School officials have lifted lockdowns for all but two schools in Santa Clarita, California, following the shooting.

The Santa Clarita Police public information officer Carrie Lujan tells CNN that at 7:25 a.m., an off-duty deputy was dropping off a student at the high school when he thought he heard gunshots.

A school resource deputy was also there at the school. They both went to investigate. The school was put on lockdown as a precaution.

A shooting at Saugus High School in Santa Clarita, California, forced students to leave their belongings and flee as authorities look for a shooter.

At least five people were injured in the shooting, according to Deputy Eric Ortiz of the Los Angeles County Sheriff's Department.

The L.A. County Sheriff just tweeted that, at this time, they are looking for one suspect.

Authorities are looking for an Asian male in black clothing. They believe he is a student.