The victim was described as a 14-year-old boy.

The suspect remains in grave condition with a gunshot wound to the head.

Among the victims was the suspect who was seen on video shooting five people and then shooting himself in the head, Capt. Kent Wegener of Los Angeles County said.

One of the victims, a 16-year-old girl, died this morning, Wegener said.

Wegener provided the following details about the other victims who were injured:

A 16-year-old student was killed in today's shooting at Saugus High School in Santa Clarita, California, according to Capt. Kent Wegener of the Los Angeles County Sheriff's Department.

"Her parents are at the hospital," Wegener said.

Two 14-year-old boys, a 14-year-old girl and 15-year-old student were also injured in the shooting, he said.

Detectives are reviewing a video showing the moment the suspect pulled a handgun from his backpack and shot five people, according to Capt. Kent Wegener of the Los Angeles County Sheriff's Department.

The suspect then shot himself in the head, Wegener said.

Authorities are working with the FBI to preserve any cell phone video that recorded the shooting, he said.

He said that the suspect's girlfriend and mother are currently talking to police.

The suspect is currently at the hospital in grave condition.

It was the shooting suspect's birthday today, according to Capt. Kent Wegener of the Los Angeles County Sheriff's Department.

The suspect turned 16 today, according to Wegener, and is in grave condition. 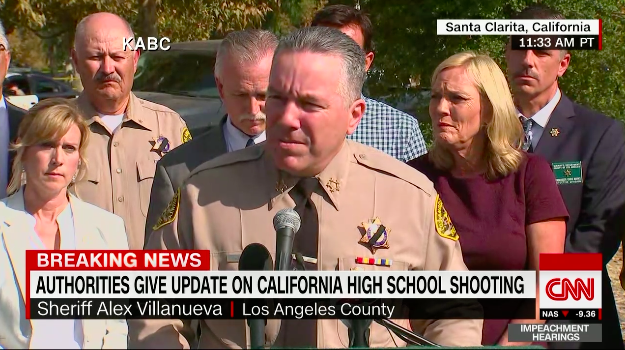 "Among those that were transported turned out to be the suspect who is currently in the hospital in grave condition," Villanueva said

"It's a terrible, inappropriate, event," Clinton said regarding the shooting in California. "I mean we haven't really passed any meaningful gun safety regulation in 25 years. That was a long time ago when I was there, but we know that the background check law, let's just take that. We don't know the facts of this case yet."

Clinton discussed the Brady Bill passed in Nov. 1993. The legislation required mandatory background checks for most gun purchases and the 1994 ban on semi-automatic assault weapons.

During Clinton's presidency, 12 students and one teacher were killed during the Columbine High School massacre on April 20, 1999. Following that mass shooting, Clinton pushed for legislation centered on closing the so-called "gun show loophole."

That passed the Republican-controlled Senate by a single vote, but with support from just six GOP senators. The effort died in the House when just 15% of Republicans, who by then held the majority in that chamber as well, supported the decisive amendment.

Clinton shared some words of comfort for the students and families and how schools should "do everything they possibly can to minimize this."

"[Y]ou deserve an environment which minimizes your risks. We can minimize your risk without doing anything to the right that having arms for hunting, sport shooting or self-protection. Nothing, zero, nada. It doesn't affect that at all to have a good, comprehensive background check law and from my point of view it does nothing to man military-style assault weapons and ammunition clips over a certain size," Clinton said. "So we just need to calm down and take this out of politics, and give more of our kids a better future. I mean, it's just — it doesn't make any sense."

Th FBI has offered assistance in the school shooting in California, according to an FBI spokesperson.

The agency is waiting to hear back from local law enforcement, the spokesperson said.