Our live coverage has ended.

At least 16 deaths have been linked to this week's extreme weather.

The deaths were reported across Iowa, Illinois, Michigan, Minnesota, Wisconsin and Indiana since the weekend.

Poulakidas said they’ve seen “horrific injuries to feet and hands” due to Chicago’s brutally cold temperatures. Some of the injuries were so severe that some patients may lose limbs.

Doctors tried to use “alternative services” to save limbs on 12 patients in the last 24 hours.

Frostbite in these extreme conditions can set in three to 10 minutes depending on age, exposure and other factors like wet gloves and socks, or even alcohol consumption, Poulakidas said. The victims included a mix of the homeless and people working outdoors.

Noreen Keeney, spokesperson for Cook County Health, said that even as temperatures begin to rise on Friday, they are expecting an uptick in frostbite cases of people who put off medical treatment.

A zebra on a private farm near Delphi, Indiana, died as a result of the bitter cold and extreme weather blasting the Midwest, sheriff’s officials said.

The zebra got stuck in a metal fence, and died as it tried to free itself in the arctic air, Carroll County Sheriff Tobe Leazenby said.

After consulting with a veterinarian, the sheriff said he and the department learned the cold air likely crystalized in the zebra’s lungs, which led to its death. Leazenby said the temperature at the time of the incident was between 10 and 15 below zero.

The private farm houses other animals, including another zebra, the sheriff said. No other animals were harmed by the cold temperatures.

The National Weather service says the life-threatening cold that has gripped the Upper Midwest and Great Lakes, in addition to the Ohio Valley, Mid-Atlantic and Northeast is near an end.

By Friday, temperatures in the Upper Midwest will finally rebound to well above zero --with high temperatures making it to the teens and low 20s.

By Saturday, high temperatures will be in the 30s and 40s.

Chicago had a brutally cold Wednesday.

Here's a look at some of the other records from Chicago, per the National Weather Service: 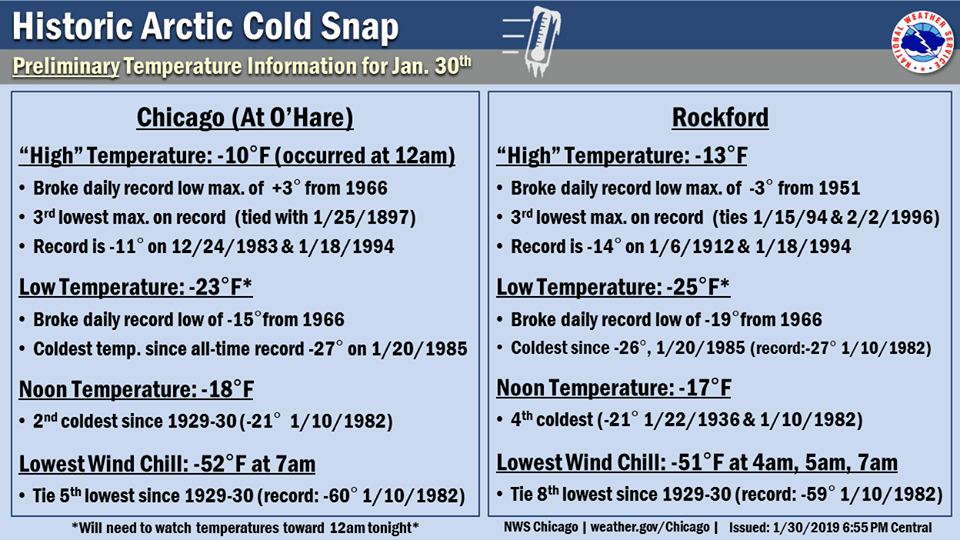 The cold and snow have taken a toll on the airlines.

Nearly 6,400 flights have been canceled in and out of the US, since the snow and cold began on Tuesday, according to flightaware.com.

Chicago airports have been particularly hard hit, with more than 4,100 cancellations reported in and out of O’Hare and Midway airports over the last three days.

It's insanely cold in Wisconsin -- and it's about to get even colder -- but that's not stopping firefighters from doing their duty.

Cameron Fire Department Chief Mitch Hansen was pictured with a frozen beard and after battling a house fire in minus 50 wind chills Wednesday. "The fire gutted the home but everybody got out safe. We saved what items we could for them," Tony Paulson, one of the firefighters, told CNN.

"There was minus 50 wind chills. You're pretty much froze stiff on the outside but warm on the inside."

Assistant Chief Bimbo Gifford, who took the picture of Hansen, said he's been a volunteer with the department for decades and this is the first time he had to battle a fire with such freezing temperatures.

"It's tough. We're a small team of volunteers but we're careful and trained," he told CNN. "When it's that cold you just can't move."

The Old Guard is on duty in the frigid temperatures outside the Tomb of the Unknown at Arlington National Cemetery.

The guard is changed every hour when the cemetery is open, Major Stephen Von Jett said. At night, the shifts vary.

"Our Soldiers have great cold weather equipment that allows them to brave these conditions, but it's their commitment to the mission, and to representing the US Army's commitment to the American people that keeps their backs straight against the wind," Von Jett said.