Our live coverage has ended. Follow the latest news here or read through the updates below.

Vice President Kamala Harris will travel Wednesday to California to mourn the 11 victims in the Monterey Park mass shooting, her office said.

Harris will be the highest-ranking official from the Biden administration to visit the scene. The California native is expected to lay a wreath honoring the victims, meet with families of those impacted and the young man credited with disarming the gunman — Brandon Tsay.

The office did not say whether Harris will also visit Half Moon Bay, where seven people were killed in a mass shooting on Monday.

On Sunday, the vice president addressed the shooting, and declared: “This violence must stop.

“I do want to address the tragedy of what happened in my home state, in Monterey Park, California,” Harris told a crowd in Tallahassee, Florida, addressing the shooting at the beginning of her remarks on Roe v. Wade.

“A time of a cultural celebration… and yet another community has been torn apart by senseless gun violence,” Harris said, noting that the shooting took place the weekend of the Lunar New Year.

Harris is the first South Asian and Black US vice president.

Ming Wei Ma, an employee of the Star Ballroom Dance known by the nickname Little Ma Brother, was described by a patron as “very enthusiastic” and very involved in the operations at the studio.

Ma was one of the 11 people killed in the mass shooting at the dance hall on Saturday night.

May Hua Huang, a regular at the studio, said Ma didn’t teach dance and mostly managed, but one time helped her learn the Cha Cha.

Huang learned of the shooting when her son called her around 8:00 a.m. PT Sunday to see if she was OK.

“I was shocked,” she said. “I immediately looked at the media, and suddenly I felt like my heart was so tight. How could something like this happen? So horrifying.”

Shuhui Peng, a friend of Ma’s, described him as being a cultural force in the Monterey Park entertainment community.

“His personality can be summed up in two words: distrust, he did not trust anyone,” Hood said. “And hatred. He could hate people to death. He pushed it to the extreme.”

Hood said he hadn’t seen Tran, who’s accused of shooting and killing 11 people at a California dance studio, in about eight or nine years. Hood had rented an apartment from Tran and ultimately knew him for 20 years, but they had a falling out, as reported in the New York Times.

Hood refused to be recorded or have his photo taken. He referred to Tran as Andy, the name he says Tran used.

Hood said his former friend hated “whoever he thought was not nice to him" and that "there were other dance instructors he did not like at both (Lai Lai and Star Ballrooms)."

He added that Tran thought “the instructors were not nice to him, he thought they spoke evil of him."

"That was baseless," Hood said. "He was always unhappy with the people in the studios, always complaining about studio bosses and other instructors, not about the students. It was all in his mind.”

“He didn’t like people. He never fought with anyone or argued. Basically I think it was his personality and he hated people to the bone," he added.

According to Hood, Tran lived a simple life, had no friends or other hobbies and he always liked to dance.

Hood, who lives about 10 minutes from Star Ballroom in an apartment complex, says that he hasn’t been to the studio since the pandemic and doesn’t plan on returning.

He said he's afraid that he will know many of the victims on the coroner’s list.

Earlier today, the coroner identified all 11 who were killed.

Authorities are still investigating many of the details of the mass shooting Saturday that left 11 people dead and injured nine others at a dance studio on Lunar New Year in Monterey Park, California.

The man who disarmed the 72-year-old gunman at the second dance studio in nearby Alhambra described to CNN the moment he came face to face with the gunman:

“I just had this rush of thought and adrenaline. I was able to come to the conclusion that I needed to do something, I needed to grab the gun. I needed to save myself and people inside,” Brandon Tsay said.

The suspect fled and Tsay called police to the site. Less than a day later, the suspect was found dead inside a white van about 30 miles away in Torrance as a SWAT team swarmed the vehicle. The sheriff said the suspect died following a self-inflicted gunshot wound.

Here's the latest on the shooting and investigation:

The Los Angeles County Coroner Medical Examiner’s Office has released the names of all 11 victims in the Monterey Park mass shooting. All were in their late 50s to mid 70s.

There have been 39 mass shootings in the United States so far this year — putting 2023 on pace to have the most mass shootings at this point than any year on record, according to the Gun Violence Archive (GVA). In a three-day span, three mass shootings have taken place in California, including Monday's shooting in Half Moon Bay.

The dangerous pace of mass shootings escalated in 2020 during the Covid-19 pandemic and has persisted since then. Between 2019 and 2020, the total number of mass shootings each year jumped from 417 to 610. Then, 2021 became the worst year for mass shootings since GVA began tracking them in 2012, with 690 across 44 states and Washington, DC. There were 647 mass shootings in 2022.

Here's a look at the rise of mass shootings across the years: 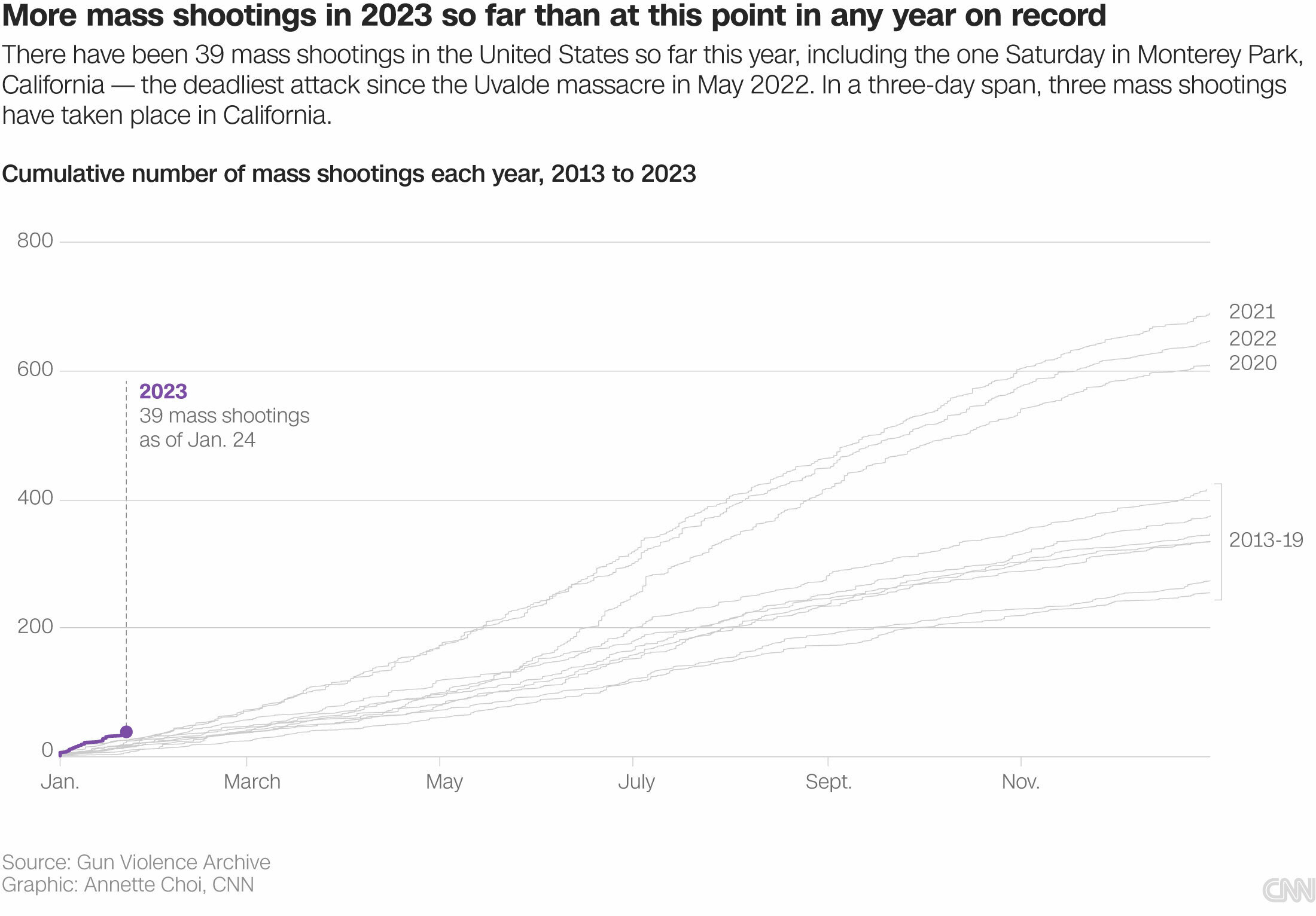 More on the data: CNN reports mass shootings based on data from the Gun Violence Archive, a nonprofit organization that tracks gun violence in the United States. CNN and the GVA define a mass shooting as a shooting that injured or killed four or more people, not including the shooter. The number of mass shootings and casualties is not exact and subject to change as reports from law enforcement, media and other sources GVA relies upon are updated and verified.

As investigators work to determine a motive in the mass shooting that killed 11 people and injured nine others at a dance studio in Monterey Park, California, the community now faces a long road to recovery, its mayor said.

“People are just in disbelief and shock, and are feeling very numb,” Mayor Henry Lo told CNN Monday night. The Saturday night shooting came as the city’s majority Asian community was marking the Lunar New Year, bringing tragedy on what was supposed to be one of the most auspicious days of the calendar.

See photos from the scene:

Monterey Park Mayor Henry Lo told CNN he wants to see the dance hall that was the site of a deadly shooting become a safe place again.

The Star Ballroom Dance Studio where the shooting took place on Sunday, resulting in the deaths of 11 people, has been a staple of the community, Lo told CNN on Tuesday.

“It was a place for people to socialize, to learn how to dance” and was frequented by many generations, he said. “We want to make sure that this dance hall continues to thrive and that people feel safe that they can socialize.”

Lo said investigators “still don't have a clear picture of the motive.”

“My understanding is that the gunman had some history with the dance hall. In the past, he frequented [it] and I understand that he also met his ex-wife there,” he said. “However, again, we may never know what was the motivation.”

The suspect, identified as Huu Can Tran, was pronounced dead following a self-inflicted gunshot wound Sunday as police swarmed a white van in Torrance, about 30 miles from Monterey Park, according to Los Angeles County Sheriff Robert Luna.

His ex-wife and a longtime acquaintance both told CNN that Tran had once been a regular patron at the studio.

Val Anthony Alvero, the son of Monterey Park victim Valentino Alvero, told CNN that his dad was always upbeat and caring for others.

Alvero told CNN’s David Culver that his father hoped to retire in about a year and return to his native Philippines. In his free time, Valentino Alvero could be found at Star Ballroom Dance Studio.

"He'd dance around the house," Val Anthony Alvero said. "He loved that kind of stuff."

"He's not the type to run away from danger," he added.

Val Anthony Alvero said the emotion of anger hasn't surfaced yet against the suspected gunman.

"I don't think it adds anything to be angry to the situation ... I'd just like for better to come out of it," he said.