Our live coverage has ended. Read more about the crash in the posts below.

Cpl. Justin Dunn, with the Missouri State Highway Patrol, said the Chariton County 911 Center received a 911 call of a vehicle struck by a train southwest of Mendon, Missouri.

According to Dunn, preliminary reports indicate that the Amtrak train traveling to Chicago struck a dump truck at a railroad crossing that was “uncontrolled.” An uncontrolled crossing means there were no lights or mechanized arms.

“The train had approximately eight cars including a baggage car. Seven cars have derailed. There are multiple injuries and we can confirm there are three fatalities, two on the train and one in the dump truck,” Dunn said.

Dunn said the number of injuries is unknown at this time and that the injured were transported to area hospitals.

MSHP Lieutenant Eric Brown said the investigation will continue through the evening hours and into tomorrow, and that the NTSB is aware of the situation.

Mendon is about 100 miles northeast of Kansas City. The train was traveling from Los Angeles to Chicago.

The collision was the second in two days in which an Amtrak train hit a passenger vehicle.

On Sunday, 85 passengers were on board a train in rural California that hit a vehicle. Three people were killed and two people suffered major injuries, according to officials. All of the victims were in the vehicle, the officials added.

Here's a map showing the location of the train derailment: 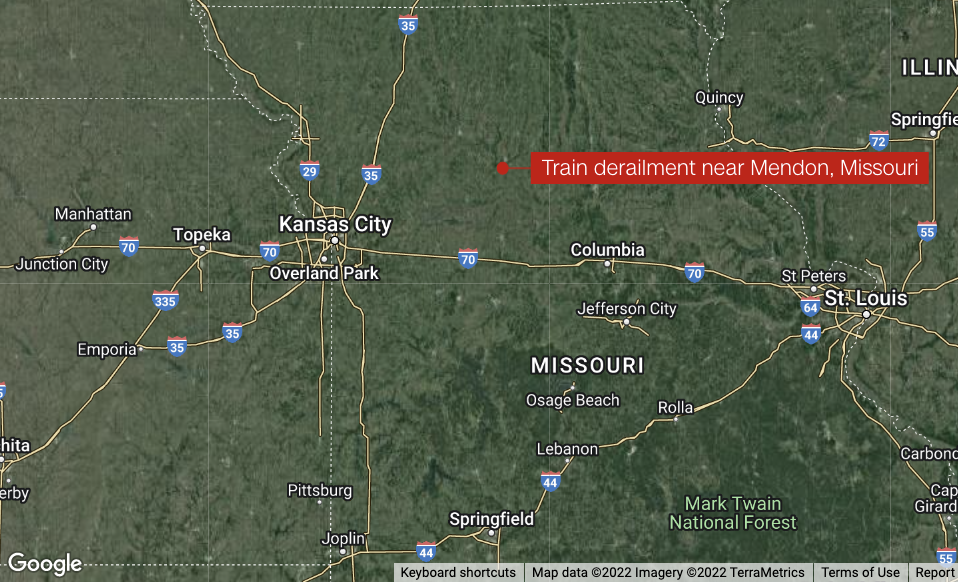 Cpl. Justin Dunn, with the Missouri State Highway Patrol, said at least three people were killed following an Amtrak train derailment. Officials say the train hit a dump truck at an "uncontrolled crossing" — that is when there are no lights or electronic devices that warn cars when trains are coming and are common on rural roads.

Dunn said two of the people who died were inside the train and one was inside the dump truck.

He said a total of seven cars derailed, and dozens of other people who were injured were taken to area hospitals. Dunn added that those who were not hurt were also transported away from the crash.

Officials say the investigation is in the preliminary stages and more information will be released as it continues. The Missouri State Highway Patrol says it is still working with Amtrak and the various other area agencies that responded to assist.

The National Transportation Safety Board (NTSB) is launching a 14-member go-team to investigate Monday’s Amtrak derailment near Mendon, Missouri, the agency said in a tweet.

Two Boy Scout troops from Appleton, Wisconsin, were on the Amtrak train that derailed in Western Missouri Monday.

Scott Armstrong, director of National Media for Boy Scouts of America, told CNN Monday that a total of 16 scouts and 8 adult leaders were on the train.

Armstrong says the scouts on the train are believed to be between 14 and 17 years old and he confirmed none of them were hurt.

All 16 Boy Scouts and their adult leaders stayed on the scene of the train derailment to render aid and assist people that were hurt, according to Armstrong.

The two different troops were on their way back from a stay at Philmont Scout Ranch in New Mexico, Armstrong said.

Armstrong says Boy Scouts of America is now working to get the scouts and their leaders back to Wisconsin.

The Missouri State Highway Patrol will be having a 6 p.m. ET news conference on the train derailment near Mendon, Missouri, according to a tweet.

Director Eric McKenzie with Chariton County Ambulance told CNN that there are multiple fatalities and at least 50 people injured in the incident.

Police say the Amtrak derailment in Missouri's Chariton County is a “large-scale event” with multiple fatalities and multiple injuries.

In a phone call with CNN, Cpl. Justin Dunn, a public information and education officer for the Missouri State Highway Patrol Troop B, said that authorities are still trying to ascertain the number of fatalities.

According to Dunn, the Mendon school is being used as a triage center for passengers who sustained minor injuries.

Dunn said the train hit a dump truck, causing it to derail.

Multiple law enforcement agencies and first responders from surrounding areas are on scene to assist, according to Dunn.

Approximately eight train cars have derailed in an incident involving a dump truck, according to Missouri State Highway Patrol (MSHP).

MSHP and numerous other agencies have responded to the scene located southwest of Mendon, Missouri, in Chariton County, according to a tweet posted Monday.

According to the tweet, local and surrounding agencies are on scene providing assistance.

Missouri Gov. Mike Parson said that he is "saddened" to hear about the Amtrak train that derailed, injuring at least 50 people, the company said.

Amtrak said that the train was traveling from Los Angeles to Chicago when it hit a truck that was at a crossing near Mendon, Missouri. Amtrak said there were about 243 people and 12 crew members on board with "early reports of injuries," it said in a statement.

Parson also said in his tweet, "we ask for Missourians to join us in praying for all those impacted."