At least 156 missing after partial building collapse near Miami

A structural field survey report completed nearly three years before the collapse of the Champlain Towers South condominium complex in Surfside raised concerns about structural damage to the concrete slab below the pool deck and “cracking and spalling” located in the parking garage.

The report from October 2018 was included in a series of public records documents that were published overnight on the Surfside, Florida, town website. The New York Times was the first media outlet to publish a story about the field survey report.

Page seven of the report, the goal of which was to "understand and document the extent of structural issues that require(d) repair and/or remediation in the immediate and near future," detailed signs of “distress/fatigue” in the parking garage:

“Abundant cracking and spalling of various degrees was observed in the concrete columns, beams and walls. Several sizeable spalls were noted in both the topside of the entrance drive ramp and underside of the pool/ entrance drive/ planter slabs, which included instances with exposed, deteriorating rebar. Though some of this damage is minor, most of the concrete deterioration needs to be repaired in a timely fashion.”

Spalling is a term used to describe areas of concrete that have cracked or crumbled.

The 2018 report also noted that "many of the previous garage concrete repairs" were "failing."

The report also said the waterproofing below the pool deck was failing and causing "major structural damage."

It further noted that "the replacement of the existing deck waterproofing will be extremely expensive...be disruptive and create a major disturbance to the occupants of this condominium building."

An attorney for the building's condominium association, Kenneth Direktor, warned against early speculation. The building, he told CNN on Friday, had been subject to a series of inspections "over the last several months" as part of its milestone 40-year safety certification process.

"Nothing like this was foreseeable," Direktor said. "At least it wasn't seen by the engineers who were looking at the building from a structural perspective."

CNN reached out to Direktor on Saturday for comment.

Since early Thursday morning first responders have been working at the scene at Champlain Towers South, a few miles north of Miami Beach.

A side of the building has fallen, leaving huge piles of rubble behind.

Florida Gov. Ron DeSantis has said local and state officials are hoping for additional rescues but "we are bracing for some bad news just given the destruction that we're seeing."

The building was undergoing roof work, but it's unknown whether this was a factor in the collapse, Surfside Mayor Charles W. Burkett said.

"This is a horrific catastrophe. In the United States, buildings just don't fall down," Burkett said.

Read more to see the ongoing aftermath in pictures: 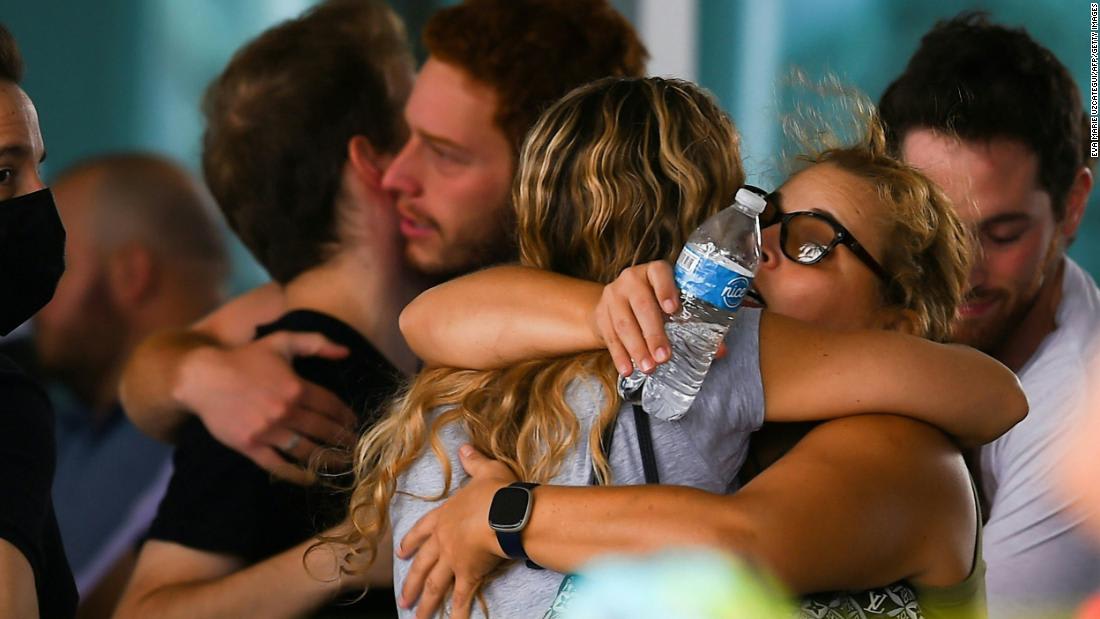 Miami-Dade Police Department Director, Alfredo Ramirez III paid tribute to those involved in search and rescue efforts in Florida as work continued through the night.

"The collaboration I have witnessed by our local, state and federal partners is admirable and humbling," he said.

"We must remain focused in our efforts to save lives. I ask you to join me in prayer. We have not lost hope!"

The team includes Florida Task Force 1, which consists of Miami-Dade Fire and Rescue firefighters and three other task force teams from the state.

Task force members from Mexico and Israel, who arrived at the site Friday, are also taking part in search and rescue efforts.

While the collapse happened on US soil, the impact of the building collapse stretches far beyond US borders.

Dozens of citizens from countries across Latin America are missing, including those from Venezuela, Argentina, Colombia, Uruguay, Chile, and Paraguay.

Sarina Patel told CNN that her uncle, his pregnant wife and their one-year-old daughter were all missing.

"We had tried calling them countless times, and there's just been no answers," she said.
"We have a large extended family. They always stay in touch with someone everyday. They haven't contacted anybody. We've called multiple hospitals within that area and there's no sight of them anywhere."

Patel said the family were still hopeful "and praying for a miracle."

"We haven't received much updates yet," she said, adding that her uncle's mother had provided a DNA sample in case authorities require it for identification.

"The last time I spoke to [the missing family] was on Sunday," Patel said.

"I had actually called them to tell them I had just booked a flight to come visit, because they've been asking me to come see their home. And to meet their daughter, I haven't met her due to the pandemic."

Rescue efforts continue at the site.

Miami-Dade Fire Rescue has advised people living near the Surfside Building to stay indoors due to the smoke coming from the debris.

“If you live near the area of the #SurfsideBuildingCollapse, you may be experiencing smoky conditions, which can affect those with respiratory conditions," Miami-Dade Fire Rescue said in a tweet.

"Please stay indoors, keep your windows and doors closed, and run your a/c by recirculating the air inside your home."

Two days after the catastrophic partial collapse of a residential building in South Florida, officials remained focused on the search for the dozens of people believed to be under the mountain of rubble as an expert suggested it may be months before the cause of the disaster is known.

While anxious family members awaited some news -- and the search continued through the night -- officials urged for a powerful sentiment: Hope.

I am holding out hope because our first responders tell me they have hope," Miami-Dade County Mayor Daniella Levine Cava told CNN.

"They are the ones on the ground. They are in the tunnels; they're in the water; they're on top of the rubble pile. They're helping to sift through using the cameras, the dogs, the sonar, and they say they have hope."

An emotional Miami-Dade Fire Rescue Chief Andy Alvarez echoed the sentiment in an interview with CNN's Wolf Blitzer. "There's always hope," he said. "We're doing everything we can to bring your family member out alive." 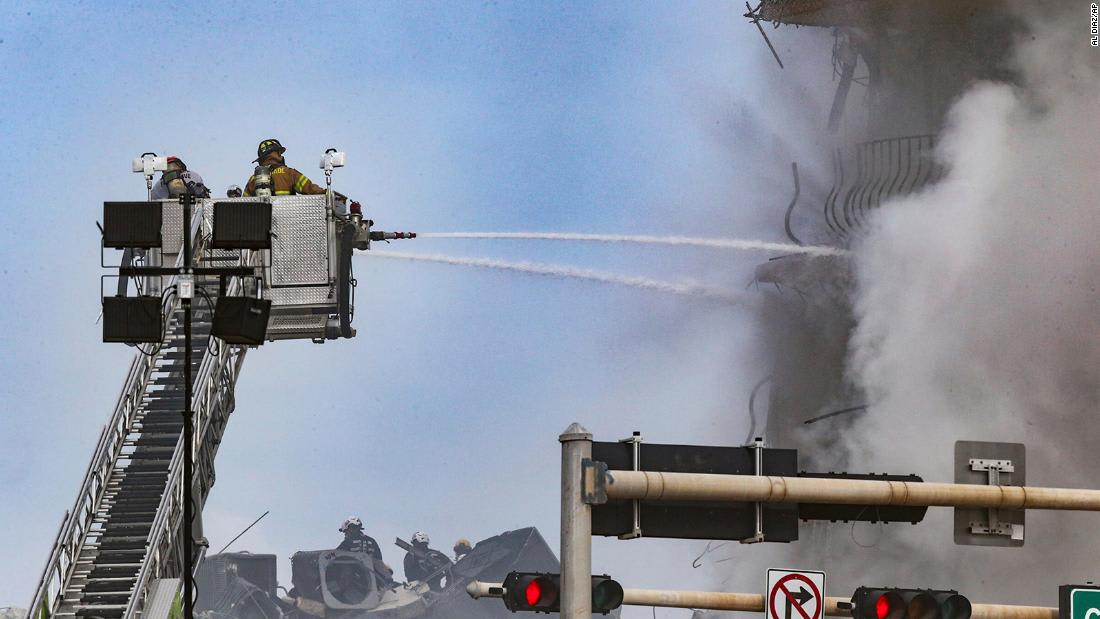 It could take months to know the cause of the South Florida building collapse. For now, officials are focused on finding dozens who are unaccounted for

Two survivors who escaped the building told CNN that the disaster was a surreal and terrifying experience.

Albert and Janette Aguero were on vacation with their two children, aged 22 and 14, when they were woken up by a "loud, thunderous sound" as the condo collapsed.

The family were staying on the building's 11th floor.

"I thought the building was struck by lightning," Albert said.

"Then [Janette] realizes that the chandeliers and the lights in the apartment are all swinging back and forth, so we know it's something more than just a storm."

He added: "We've lived through Hurricane Sandy. It wasn't that."

Janette said that the family soon realized they needed to leave the building but that "the elevator was gone." Parts of the wall by the stairwell had also been destroyed, leaving the stairs open to the elements.

Janette added that it was "a mad dash to get down" the stairs and out of the building.

"It was pitch dark," Albert said. "I'm thinking...we're racing against the clock because the rest of the building is going to come down."

"It was surreal, it was scary, it was terrifying," his wife said.

The family were unhurt apart from a few minor scratches.

It's still not fully clear what caused an oceanfront condo tower in Surfside, Florida, to partially collapse, sending some units in the 12-story building plummeting to the ground.

Experts are still looking to determine the exact contributing factors that led to the catastrophe. But from what investigators know, the building appears to have fallen in a "pancake collapse," Miami-Dade Fire Rescue District Chief Jason Richard told CNN, though evidence of other types of collapses are present, too.

Pancake collapses are dangerous and severe, and their damage can complicate search-and-rescue efforts. Here's how they happen.

"Pancake collapses tend to 'stack' floors on themselves, bringing all their weight down nearly square on the floor below," Favre told CNN. "This continues down, accumulating more weight and stress as the structure falls."

A pancake collapse is a "progressive failure" that often begins at the bottom: A load-bearing element is damaged, usually in a building's lower floors or foundation, which triggers the top floors to collapse vertically into the floors below, said Necati Catbas, a professor in the Department of Civil, Environmental, and Construction Engineering at the University of Central Florida. "Once there is 'no' support at the bottom floors or foundation, the top floors start pounding on the from top to bottom in progressive manner," Catbas said in an email to CNN.

Why they're dangerous: A pancake collapse is more dangerous than other collapses, Favre said, because there are often few voids, or pockets of space and air, in the rubble.  "The sheer tonnage of materials ... makes it very difficult for void spaces to exist," Favre said.

Pancake collapses also complicate search-and-rescue missions, he said, because the structures that remain near the collapse site are unstable and could fall as rescuers move through the rubble.

Voids can still be present, though, particularly when multiple kinds of collapses are present, as in the incident in Surfside, said urban search and rescue expert Scott Goldstein.