Unrest in Memphis after police shooting

Our live coverage has concluded. Read more about the shooting that ignited the Memphis protests here.

Memphis Police have heightened their alert status around the city to level 3, as a precaution, according to the agency on Twitter.

Level 3 means that all officers will be working with no off days. Officers will also work in pairs and will have more of a presence in the community. 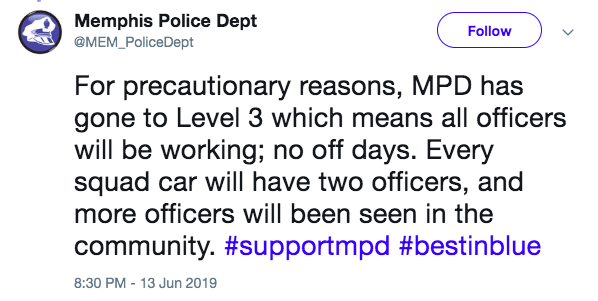 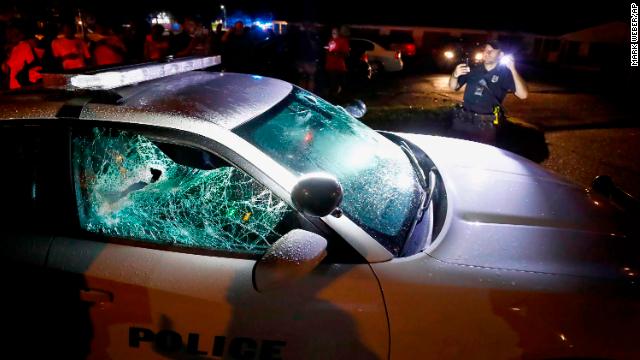 According the Memphis Police Department, the damage includes:

The turmoil came after US marshals shot and killed 20-year-old Brandon Webber last night in the north Memphis neighborhood of Frayser, officials said.

US marshals were serving a warrant for Brandon Webber related to a June 3 shooting in Hernando, Mississippi, according to District Attorney John Champion.

Webber had been in Hernando on June 3 to answer to an ad on Facebook regarding the purchase of a vehicle, Champion said at a news conference today. Webber and the seller got in the car for a test drive.

As they were outside switching seats, Champion said Webber shot the victim five times and stole the vehicle.

The victim survived and was able to identify Webber from a photo lineup, the district attorney said. The victim is still hospitalized.

Authorities reached out to US marshals on June 8 and asked them to arrest Webber on warrants for aggravated assault, armed robbery and conspiracy to commit armed robbery.

Authorities in Hernando said they are looking for a second suspect connected to the robbery and believe that person is also in Memphis. They said the suspect drove Webber to Hernando, but was not in the car for the test drive.

At least 36 Memphis police officers and Shelby County deputies suffered minor injuries last night due to bricks and rocks being thrown at them during the protests, the Memphis Police Department tweeted.

Several officers were transported to the hospital in non-critical condition. All of the officers have been released from the hospital.

Police also said that three adults were arrested during the protests. They were charged with disorderly conduct, and one of them was also charged with inciting a riot, police said.

The NAACP's Memphis Branch announced today that it is making a formal inquiry into the death or Brandon Webber, who was shot and killed by US marshals.

"As we grieve for the loss of another African American young man’s life, the injury of law enforcement officers, and pray for all involved, we also want answers to questions surrounding Mr. Webber’s death," the group said in a statement.

Memphis' NAACP is asking the US Marshals and the Tennessee Bureau of Investigation for additional information about the shooting.

"Unfortunately for our citizens, Memphis is again in the spotlight over the shooting of an African American. The NAACP Memphis Branch will continue to ask these questions until we obtain a response," the group said.

Brandon Webber, the 20-year old man who was shot and killed by US marshals in Memphis, had a criminal background, according to the Tennessee Bureau of Investigation.

In 2018, Webber faced 11 charges in Shelby County, according to court documents.

Here's what the documents say about Webber's previous interactions with police:

The Shelby County School District confirmed that Brandon Webber, the man shot and killed by US marshals in Memphis last night, graduated from Central High School in 2017.

Greg McCullough, the principal at Central High School, said Webber was a hard-working student who excelled at art.

“My heart is broken over the news regarding the death of Brandon Webber. Brandon worked hard during his time at Central where he graduated in 2017. I remember that he was a very talented art student. He seemed to really love his experience at Central High and he engaged well with others. My prayers go out to the Webber family during this devastating time.”

Shelby County Schools said it has heard of a planned vigil near Central High School.

"As a proactive measure, we have deployed additional security personnel to Central HS and provided grief counselors to multiple schools in the area to assist students and staff. Our priority is to ensure our school is secured and students and staff feel safe," the school district said in a statement.

There is no body camera video showing the shooting death of Brandon Webber, since federal agents aren’t required to use body cams, Dave Oney, a spokesperson for US Marshals Service, told CNN.

The US Marshals Service said in a statement that deputy marshals were trying to serve a warrant and fired at Webber "in response to a threat posed by the subject."

"The Marshals were attempting to serve a warrant on a 20-year-old man with multiple felony warrants. In response to a threat posed by the subject, members of the task force fired their weapons, striking and killing him," the US Marshals said.

The Tennessee Bureau of Investigations, which is the lead agency, and the US Marshals Service will conduct an internal review of the shooting.

The US Marshals Service said it will not release the names of marshals involved in shooting until the investigation is completed.