The suspect’s fingerprints appear to have been altered, making it difficult to identify him that way, two law enforcement sources said.

The suspect was identified using facial recognition software, according to one law enforcement source.

"We are terribly saddened by the loss of five members of our community in today's heinous shooting," Hogan said.

He thanked first responders who arrived at the scene within moments of the shooting.

Hogan also spoke about the newspaper and the journalists who work there.

"The Capital Gazette is my hometown paper, and I have the greatest respect for the fine journalists, and all the men and women, who work there," he said. "They serve each day to shine light on the world around us so that we might see with more clarity and greater understanding."

“There is no place in our society for this kind of hatred and violence, and the individual responsible for this horrendous crime must be prosecuted to the fullest extent of the law.”

An employee on lockdown in a nearby building during a shooting at the Capital Gazette in Annapolis, Maryland, described the frantic moments that unfolded at the scene.

Daria McMiller, who works as an administrative assistant in a building next to the Capital Gazette building, said responding officers “were hustling."

“Some of them were still in civilian clothes and they were pulling their vests on as they ran towards the building," she said.

McMiller said she and her coworkers didn’t hear any shots, but they did hear police yelling. They saw police, FBI, state troopers and SWAT respond to the scene. She said they weren’t getting any information, but were able to call their loved ones as they waited.

McMiller, a US Marine who is no longer active duty, said her first thoughts were “just to keep my coworkers safe, keep everybody inside and quiet.

"I didn’t even think about how stressful this was until we were all sitting around," she said.

Right now we don't know if this newsroom was targeted or not, but we know that four of the five people who died were pronounced dead in the newspaper office. The fifth person died at the hospital.

Threats against journalists have been on the rise in recent years. Press freedom groups have also reported an uptick in physical assaults on journalists, particularly at campaign events and other political venues.

But, thankfully, murders of journalists are very rare. That's one of the reasons why this day is so shocking. In some ways, it harkens back to the WDBJ shooting in Virginia in 2015, when two members of a TV news crew were attacked and killed by an ex-employee while on live TV.

In the wake of that attack, and the general rise in threats, many newsrooms have stepped up emergency drills and taken other measures to increase security. But newsrooms are inherently open and journalists strive to be accessible. Some sick person exploited that openness today.

The victims did not suffer gunshot wounds, and one was released from the hospital, Farquahr said. The other patient is expected to be released this evening.

A third person from the Capital Gazette shooting was transported to the University of Maryland Medical Center in Baltimore, Maryland, hospital spokesperson Lisa Clough said. There is no further information on the victim's condition or injuries.

The suspect's weapon was on the ground, and "not in his immediate proximity," he said.

He told CNN’s Wolf Blitzer that authorities have a name on the gunman but are not able to confirm it.

Schuh said he doesn't know if the newspaper was the target of today's shooting.

When law enforcement officials entered the building, they found a package or carrying device, which contained a flammable liquid, on the ground, he said.

Schuh said the shooting doesn't appear to be well-planned.

"It looks like it was amateur hour. But even amateurs can cause a lot of damage in the absence of excellence response by law enforcement. We fortunately had that in this instance," he said.

Rep. Steny Hoyer, the No. 2 Democrat in the House and longtime congressman from Maryland, said he is "heartbroken" following today's shooting.

"I have known the hardworking staff of the Capital Gazette for many years, and I extend my deepest condolences to the dedicated editors, reporters, and staff," he said in a statement. 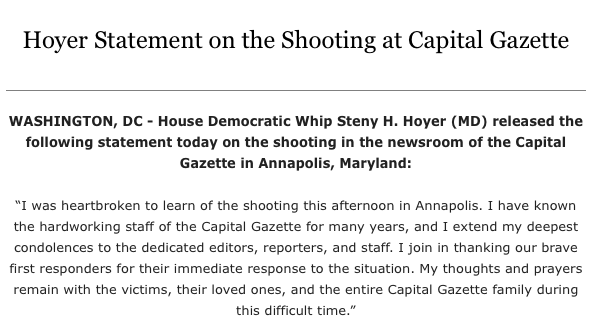 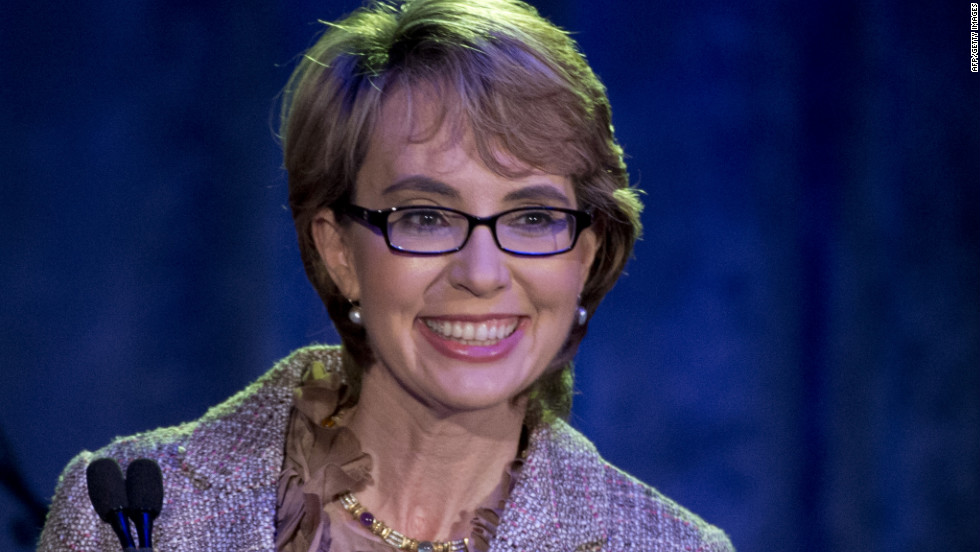 Former Congresswoman Gabrielle Giffords, who founded the gun violence prevention organization Giffords after she was badly wounded in a 2011 mass shooting outside an Arizona grocery store, just released a statement reacting to the newspaper shooting.

“Reporters shouldn't have to hide from gunfire while doing their jobs. A summer intern in the newsroom shouldn’t have to tweet for help. We shouldn’t have to live in a country where our lawmakers refuse to take any action to address this uniquely American crisis that’s causing so much horror and heartbreak on what feels like a daily basis," she said.

She added, “This is not normal. Since the year began, there’ve been 179 days and already 154 mass shootings. Every day, more than 90 people are killed by a gun, from classrooms to newsrooms and neighborhoods across the country. We are facing a problem and we have to do something about it."

Police have one person, who is believed to be the suspected shooter, in custody. Officials have not identified him, but said he is an adult male.

Speaking at a news conference, officials also said the weapon used in today's shooting was a long gun. They did not provide any further details.