CNN has obtained a video capturing what appears to be the moment gunshots began to ring out while the tournament was being broadcast online.

The video captured the sound of approximately a dozen gunshots, and screams.

Warning this video may be disturbing to some viewers:

He said he's in contact with the Jacksonville Sheriff's Office.

The Jacksonville Sheriff's Office said officers are finding many people in hiding throughout the Landing, the event area where the mass shooting happened.

The office urged anyone who is hiding to stay calm and stay in their hiding spots.

In a second tweet, the sheriff's office asked anyone in hiding to call 911.

Malik Brunson was at a nearby Hooters when the shooting occurred at the GLHF Game Bar in Jacksonville, Florida.

"I was in Hooters, all I heard was he got a gun and the shooting started," Brunson told CNN. "One of the men ran into hooters with the shot wounds -- they locked us in the restaurant."

The Jacksonville Sheriff's Office's spokesperson said one suspect is dead at the scene of the shooting.

It's unclear if there is a second suspect, but deputies are searching the area.

Jacksonville Mayor Lenny Curry says he is contact with Jacksonville Sheriff Mike Williams regarding the shooting at the Madden Tournament, according to the City of Jacksonville’s verified Twitter account.

Mayor Curry characterized the shooting incident as an “ongoing situation," and said they would address the media later this afternoon.

The Jacksonville Sheriff's Office just tweeted that there were "multiple fatalities" at the scene.

They did not release any additional information.

The Jacksonville Landing, the event center where the GLHF Game Bar is located, is situated along the St. Johns River in downtown Jacksonville. The space is home to year-round entertainment, a wide variety of waterfront dining options and an inside shopping mall. It hosts more than 600 events a year, according to its website.

Today's event was the Southeastern Qualifier for the Madden NFL Championship Series for Madden NFL 18, according to the bar’s official Facebook page.

“This is your chance to earn your spot in the first Major's Live Finals happening in October 2018. Don't hesitate to secure your spot,” the post read in part.

All games were being played on XBOX One consoles and players had to bring their own Xbox One controllers.

The third place winner would be awarded $1,000 while first and second would be flown to the Finals Qualification event.

The sheriff's office in Jacksonville, Florida, said there was a "mass shooting" at a downtown marketplace this afternoon.

The shooting occurred during the Madden 19 Tournament at the GLHF Game Bar, according to the Twitter of CompLexity Gaming, a professional gaming team who had a player at the event.

The bar is located in an event center called The Landing, which is situated along the St. Johns River.

The Jacksonville Landing is home to year-round entertainment, a wide variety of waterfront dining options and a an inside shopping mall. The Landing hosts more than 600 events a year, according to its website.

Here's where the bar is located in downtown Jacksonville: 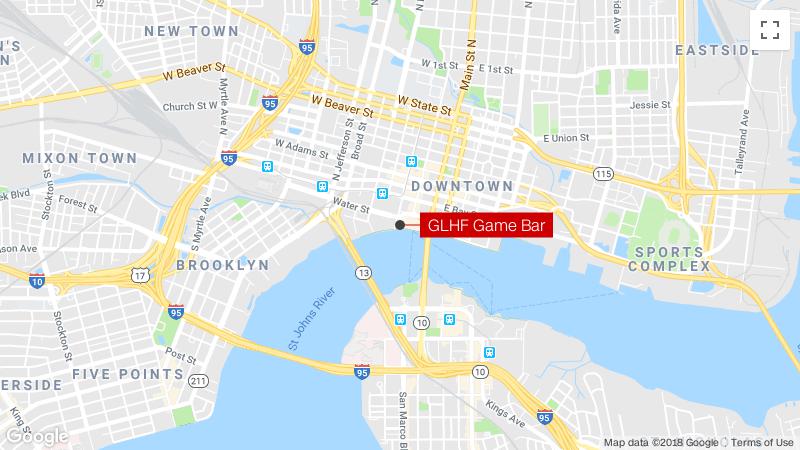