The latest on the Colorado River and Lake Mead report

Our live coverage has ended. Scroll through the posts below to learn more about the report.

A 16-page document released by the state details California’s water supply strategy and concludes that rising temperatures create “a thirstier atmosphere, plants and soil” where less water is available for people.

The state estimates that over the next two decades, California will lose 10% of its water supply. Newsom said the focus is not just on preservation but on creating a greater water reserve, most notably through recycled water projects.

“We have a renewed sense of urgency to address this issue head on. But we do so from a multiplicity of perspectives and ways, not just from a scarcity mindset,” Newsom said in a press conference on Thursday. “What we are focusing on is creating more supply. What we're focused on is creating more water,” he said.

As part of the $8 billion strategy, California seeks to build upon conservation efforts, modernize the state’s water systems and create additional water storage to capitalize on big storms.

One opponent of Newsom’s plan, Assembly Leader James Gallagher, expressed concern about the financial burden the strategy places on taxpayers.

Some context: The plan comes as the US Bureau of Reclamation releases a new report that shows the forecast for the Colorado River and Lake Mead. The findings could mean water cuts for millions living in several Southwest states — including California — starting in 2023.

A study published in Nature Climate Change in February found the period from 2000 to 2021 was the driest in 1,200 years in the western US. Last year's drought severity was "exceptional," researchers said, and all indications are the extreme conditions will continue through 2022.

The human-caused climate crisis has made the megadrought 72% worse, the study noted.

More extreme water cuts could be coming for millions of people in the Southwest. The US Bureau of Reclamation is expected to publish its 2022 forecast for the Colorado River and Lake Mead, the country's largest reservoir, on Tuesday.

Lake Mead, which provides water to roughly 25 million people in Arizona, Nevada, California and Mexico, is losing water at an alarming rate amid an extraordinary, multi-year drought made worse by the climate crisis.

Because of the reservoir's plummeting level, states that rely on water from the lower Colorado River were already subject to the cuts that accompany a Tier 1 shortage beginning in January 2022, which have mainly impacted agricultural water use.

But this year did not bring much-needed precipitation to the river basin. Federal officials will use Tuesday's report to determine water cuts for next year. If the forecast stays as dire as predicted, the Southwest will be subject to a Tier 2 water shortage.

At 1,050 feet, a Tier 2 shortage is declared, further decreasing the amount of water Arizona, Nevada and Mexico can use from the Colorado River. If the forecast is below 1,045 feet, which the latest forecast would suggest, then parts of California would be forced to cut its Colorado River water consumption, too.

At Tier 3 — something the forecast suggests is possible starting in January 2024 — water cuts could be deep enough to extend beyond agriculture and impact household and industrial water use.

How the report works: The Bureau of Reclamation's studies are based on historical data from the 1990s — a much wetter period in the West, said Eric Kuhn, a retired former manager of the Colorado River Water Conservation District.

"This means that the 'most probable' 24-month study should be considered to have a wet or 'optimistic' bias," Kuhn told CNN, which suggests that it's likely the actual levels will run a bit below what the bureau is predicting.

He also cautioned that the Pacific Ocean is heading into its third La Nina year in a row, "which is a very rare event." La Nina, defined by cooler-than-average water in the equatorial Pacific, has a strong influence on weather in the US West.

Additionally, what happens upstream is of critical importance to Lake Mead. The reservoir's forecasts are also now accounting for the falling water level — and the government's emergency actions — at Lake Powell, Mead's upstream neighbor and the country's second-largest reservoir. 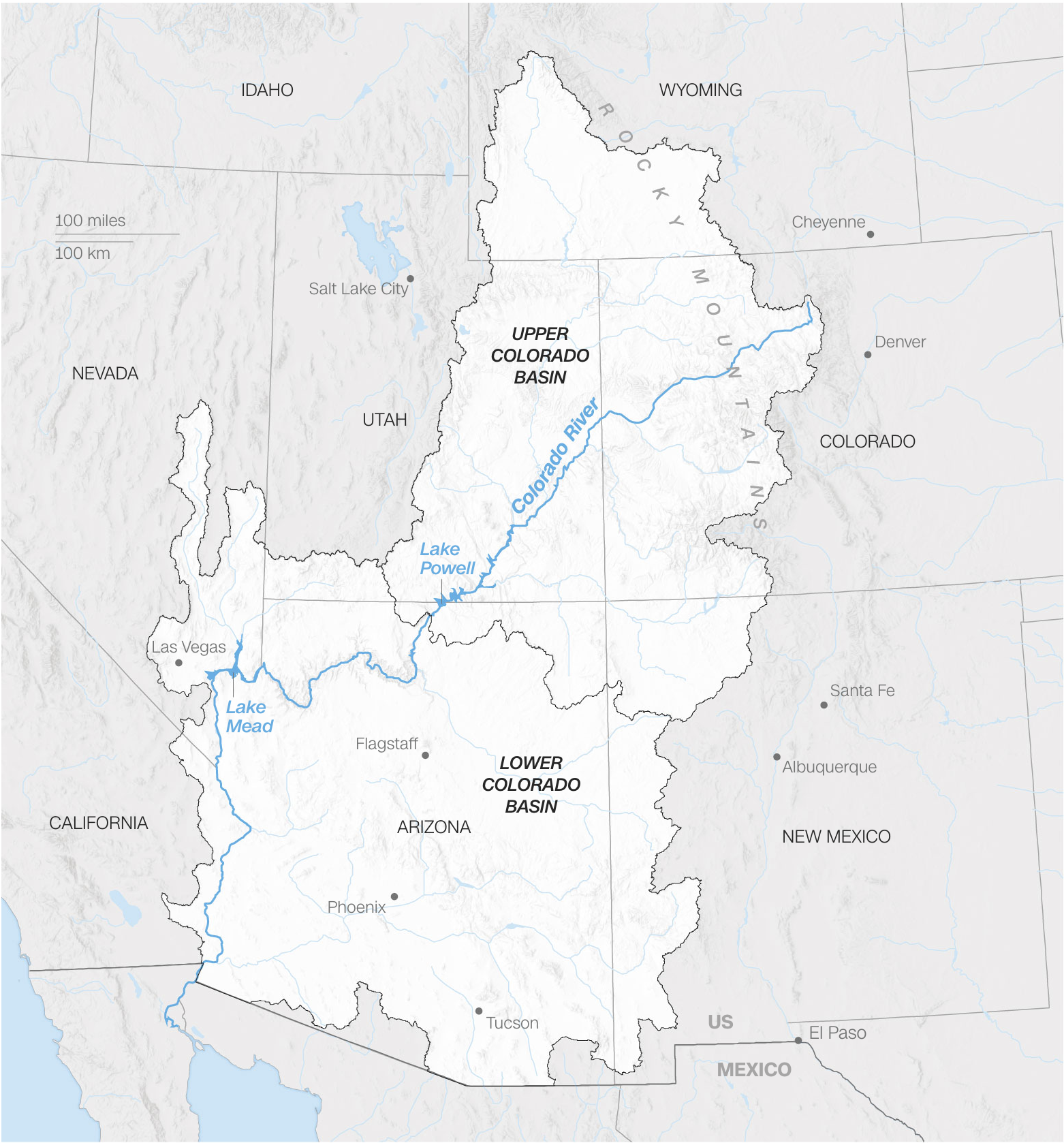 Against the backdrop of the water crisis in the Colorado River Basin, where a new report is set to show the alarming rate in which the country's largest reservoirs are plunging, California's two largest reservoirs — Shasta Lake and Lake Oroville — are facing a similar struggle.

This week, Shasta Lake is only at 36% of its total capacity. That's more than half of where levels historically are at the start of August. Meanwhile, further south, Lake Oroville is at 39% of its capacity, which is 62% of where it should be around this time on average.

Shasta Lake is the largest reservoir in the state and the cornerstone of California's Central Valley Project, a complex water system made of 19 dams and reservoirs as well as more than 500 miles of canals, stretching from Redding to the north, all the way south to the drought-stricken landscapes of Bakersfield.

Lake Oroville is the largest reservoir in California's State Water Project system, which is separate from the Central Valley Project, operated by the California Department of Water Resources. It provides water to 27 million Californians and 750,000 acres of farmland.

Last year, Oroville took a major hit after water levels plunged to just 24% of total capacity, forcing a crucial California hydroelectric power plant to shut down for the first time since it opened in 1967. The lake's water level sat well below boat ramps and exposed intake pipes that usually sent water to power the dam.

Although heavy storms toward the end of 2021 alleviated the lake's record-low levels, resuming the power plant's operations, state water officials are wary of another dire situation as the drought worsens this summer.

"The fact that this facility shut down last August — that never happened before — and the prospects that it will happen again, are very real," California Gov. Gavin Newsom said at a news conference in April while touring the Oroville Dam, noting the climate crisis is changing the way water is being delivered across the region.

Both reservoirs are a vital part of the state's larger water system, interconnected by canals and rivers. So even if the smaller reservoirs have been replenished by winter precipitation, the plunging water levels in Shasta and Oroville could still affect and drain the rest of the water system.