Our live coverage for the day has ended. Please click here for more coverage of the winter blast or read the posts below.

“Two intense plumes of lake effect snow with snowfall rates of at least 3 inches per hour will continue northeast of [Lake Erie and Lake Ontario] through tonight,” the National Weather Service office in Buffalo said Friday morning. “Periodic thundersnow will remain possible near the lakes through tonight, as well as areas of blowing snow with winds gusting to 35 mph.”

Buffalo's airport reported heavy thundersnow in the last hour and visibility of only a quarter-mile.

Here is an updated preliminary list of the snowfall totals across parts of New York over the last 48 hours, according to the National Weather Service:

The Great Lakes is the only place where lake-effect snow occurs in the United States, except occasionally at the Great Salt Lake in Utah, according to CNN meteorologist Brandon Miller.

But what exactly is lake-effect snow?

Miller said it happens when very cold, windy conditions form over a not-so-cold lake. The lake might be 40 degrees, he said, and the air 0 degrees.

“That differential in temperatures creates some instability and the water provides a moisture source,” Miller said. “When it gets over land, it deposits water vapor as snow.”

Lake-effect snow generally doesn’t fall over the water because it needs the friction and topography of the land to bring out the snow.

Winds usually blow west to east in the Northern Hemisphere, so the lake-enhanced snow is pushed to the eastern side of the Great Lakes, Miller said.

Lake-effect snow can be very localized, especially when hills and mountains can cause these little weather systems to stall out and deposit a lot of precipitation in one spot.

“You can have 20 to 30 inches of snow, and five miles away only a couple of inches,” Miller said.

According to the National Weather Service site on lake-effect snow, “wind direction is a key component in determining which areas will receive lake-effect snow. Heavy snow may be falling in one location, while the sun may be shining just a mile or two away in either direction.” 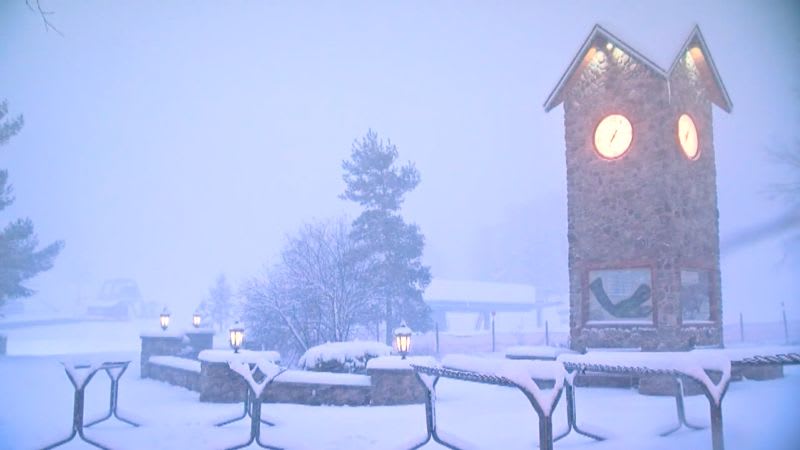 The storm’s most intense snow is expected to lash the Buffalo area in Western New York, where more than 4 feet could pile up, making for a forecast not seen in more than 20 years. The city’s highest three-day snowfall is 56.1 inches, which occurred in December 2001, according to CNN Meteorologist Brandon Miller.

As of Friday morning, the heaviest bands of snow were off Lake Erie and Lake Ontario, bringing snowfall rates of 2 inches per hour to cities in and around Buffalo and Watertown.

Given the rate of snowfall, Buffalo may see a month’s worth of snow in only a few hours. That could make this month the snowiest November since 2000, when 45.6 inches in total fell in the city during the entire month, Miller added.

Friday alone could bring more than 2 feet of snow, which would make it one of the top three snowiest days on record in Buffalo, according to Miller.

“Heavy lake effect snow off Lake Erie with 2-3” per hour snowfall rates will continue to result in extremely difficult travel this evening for the Buffalo Metro area east to Batavia, and also in Oswego County off Lake Ontario,” the National Weather Service in Buffalo said Thursday night.

“Additional accumulations of 2-3 feet of snow are expected downwind of lakes Erie and Ontario while 8-12” are likely downwind of the other 3 lakes by Sunday morning,” it added Friday.

In this week’s potentially historic lake-effect snow event in Buffalo, National Weather Service forecasters are pointing to water temperatures in Lake Erie “at the top end of what is typical for mid-November” as aiding in the set-up for the extreme snowfall.

The connection between lake-effect snow and the climate crisis is a complicated one, but scientists have observed a slight increase in annual lake-effect snow amounts around the Great Lakes since 1930, and they expect it will continue to increase modestly through the middle of this century.

That increase is due to two things:

When cold air blows over the relatively warmer lake water, it can pick up more moisture and lead to higher snow amounts downstream. In that same vein, if lakes are ice-free longer into the winter season, that sets up the potential for more lake-effect snow events, since lake-effect snow generally requires that the lakes are not covered in ice.

Ultimately, scientists think the increase will cease, though — possibly around midcentury — as air temperatures continue to rise due to planet-warming emissions. One of the major requirements for a lake-effect snow storm is cold air. As that air becomes warmer, it will be less and less likely that it will be cold enough to produce snow.

As the Buffalo region braces for more snow, here's what's been closed or moved so far:

In the last 48 hours, a lot of snow has fallen across the Midwest and Northeast regions. A lot. We’re talking at least a foot of snow in Michigan, Minnesota, New York and Pennsylvania. And more snow is on the way.

Snow showers will be expected from Minnesota to New York on Saturday, but communities along the eastern side of the Great Lakes will see the most significant totals.

The National Weather Service office in Buffalo, New York, is calling for another round of heavy snow Friday night through Sunday night, saying, “crippling lake effect snow storm remains possible during this period.”

Heavy snowfall and blowing snow will lower visibilities at times to just a few hundred feet.

Not all locations along the Great Lakes will see substantial snow amounts, though. The gradient between those with feet of snow and those with just inches will be very tight. Traveling just a few miles will greatly change impacts seen.

Wind gusts will be about 40 to 50 mph on Saturday across the Great Lakes region, taking whatever snow has already fallen and blowing it around, and reducing visibility even more.

By Sunday, snow showers will begin to push into Vermont, New Hampshire and Maine.

“A wintry pattern will be in place through the weekend with well below normal temperatures, plenty of cloud cover, and some snow showers,” the NWS office in Burlington, Vermont, said.

Temperatures across almost the entire Lower 48 will be 10 to 20 degrees below normal on Saturday. This weekend through the holiday week, more than 70% of the US population will see temperatures at or below freezing.

Hamburg, New York, located around 15 miles south of Buffalo, has picked up 33.9 inches of snow as of 8 a.m. ET this morning, according to a preliminary snow report from the National Weather Service.

The report said that 21.5 inches of that snow fell in just six hours, indicating an incredible snowfall rate of 3.5 inches per hour between 2 a.m. ET and 8 a.m. ET this morning.