Our live coverage has ended. Read more about today's events in the posts below.

The jurors in the trial of Kyle Rittenhouse have concluded deliberating for the day.

The 12 juror panel is expected to resume deliberating at 10 a.m. ET Friday morning.

The panel of five men and seven women deliberated for roughly seven hours on Thursday, 7.5 hours on Wednesday and 8.5 hours Tuesday.

As we await the jury's decision, here's a recap of what happened during the trial:

Prosecutors called 22 witnesses over the course of six days as they sought to show Rittenhouse acted recklessly that night and provoked Rosenbaum by pointing the rifle at him, setting off the ensuing series of events.

The prosecution portrayed the three other people who confronted the teen as "heroes" trying to stop what they believed to be an active shooting. Binger also questioned the teenager's decision to take a gun into the city in the first place, calling him a "chaos tourist."

However, on the stand, Rittenhouse testified he acted in self-defense when he shot four times at Rosenbaum, who he said had threatened him earlier, chased him, thrown a bag at him and lunged for his gun. Rittenhouse also referred to the three other people he shot at as part of a "mob" chasing him.

He became emotional and broke down into tears during his testimony as he began to recount the initial shooting, leading to a break in the case.

"Every person who was shot was attacking Kyle. One with a skateboard, one with his hands, and one with his feet, one with a gun," Richards said. "Hands and feet can cause great bodily harm."

The trial featured more than a dozen videos from the night that showed what happened before, during and after the shootings. Most of the facts of what happened that night were not up for debate — rather, at the heart of the trial was the analysis of Rittenhouse's actions and whether they can be considered "reasonable."

The prosecution faced an uphill challenge in the case because Wisconsin law requires the state to prove beyond a reasonable doubt that Rittenhouse did not act in self-defense. But there are limits to a self-defense claim.

The jury in the Kyle Rittenhouse trial has been deliberating for over 21 hours now over the course of three days.

Keep in mind: The court hasn't given exact times for when deliberations have started and stopped daily, so this is a very rough number.

A man who identified himself to police as a producer for MSNBC said he was instructed to follow the jury bus after deliberations had ended for the day in Kyle Rittenhouse’s homicide case Wednesday, Kenosha County Circuit Court Judge Bruce Schroeder told the court Thursday.

Police stopped the man Wednesday night after court because he ran a red light while following the jury bus by a distance of about a block, he said.

“This is a very serious matter and I don't know what the ultimate truth of it is, but absolutely it would go without much thinking that someone who is following the jury bus that is a very, it's extremely serious matter and it will be referred to the proper authorities for further action,” he said.

Schroeder said the person was ticketed for violating a traffic control signal.

An NBC News spokesperson told CNN the producer was a freelancer who never intended to contact jurors. The network is cooperating with authorities, the spokesperson said.

"Last night, a freelancer received a traffic citation. While the traffic violation took place near the jury van, the freelancer never contacted or intended to contact the jurors during deliberations, and never photographed or intended to photograph them," NBC News said in a statement obtained by CNN's Brian Stelter. "We regret the incident and will fully cooperate with the authorities on any investigation."

The judge said no one from MSNBC will be allowed inside the courthouse for the duration of the trial as the matter is under further investigation.

Earlier today, the Kenosha Police Department said in a tweet that the investigation remains open and active and that there “was no breach of security regarding the jury, nor were there any photographs obtained.”

The jury in the Kyle Rittenhouse has begun its third day of deliberations.

A group of 20 people — 11 women and nine men — were initially selected to serve on the jury on November 1 from a group of 179 prospective jurors. The jury selection consisted of just one day of voir dire in court without the use of background questionnaires.

Eighteen jurors thus sat through the entirety of the two-week trial. On Tuesday morning, Rittenhouse himself selected six juror numbers out of a tumbler in a random drawing. Those six will not participate in jury deliberations.

The remaining 12 jurors are made up of five men and seven women, according to a pool reporter in court. The jurors who were selected in the random drawing will serve as alternates. They were asked to remain at the courthouse while the jury deliberates the case.

The jury in the homicide trial of Kyle Rittenhouse resumed deliberations Thursday morning.

This marks the third day of jury deliberations after closing arguments wrapped up on Monday night.

Rittenhouse faces five felony charges for killing two people and shooting another during unrest in Kenosha, Wisconsin, last summer. During the trial, the defense argued the teenager acted in self-defense.

Students at five schools near the Kenosha County courthouse are receiving virtual instruction as “activity surrounding the courthouse continues to grow,” the Kenosha Unified School District announced in a letter to families Wednesday.

This announcement comes as the jury is set to enter its third day of deliberations in Kyle Rittenhouse's homicide trial for charges related to the fatal shooting of two people and the wounding of another during last year's unrest in Kenosha.

Two of the schools had announced Monday they were moving to virtual learning.

“While we have not been advised of any existing imminent danger, we feel this is the best course of action to protect our students and staff during an uncertain time. We will continue to work closely with law enforcement to receive support as needed in the days and weeks ahead,” the letter said.

Families with students in other schools in the district who want to keep their children home may also do so, the school district said.

Remember: We're not sure exactly when the jury could return its verdict. The jurors are set to reconvene soon for their third day of deliberations.

Jurors deliberating the fate of Kyle Rittenhouse have submitted a total of five questions to the court over the past two days.

Below are the handwritten questions from the jury that were filed with the court. 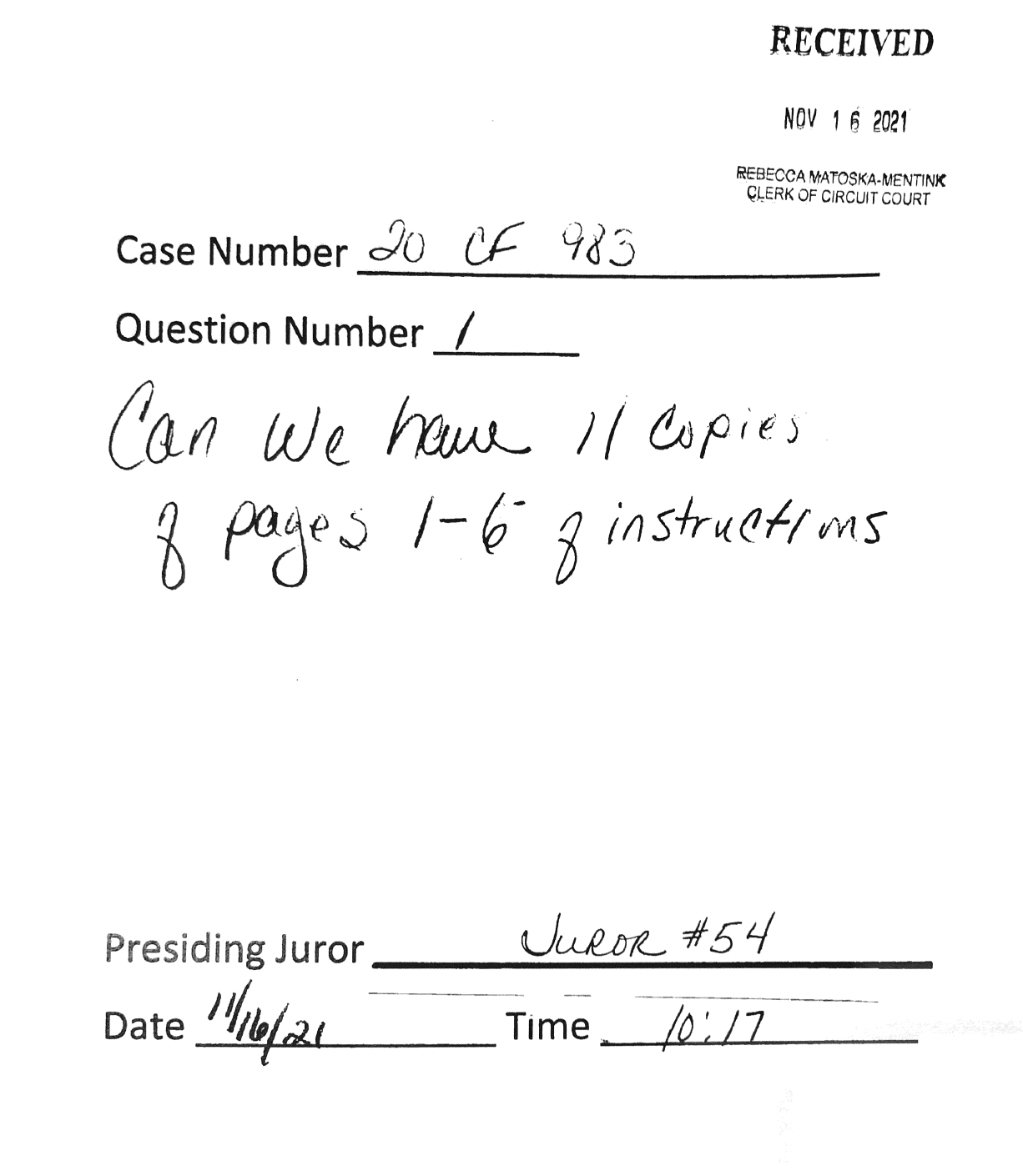 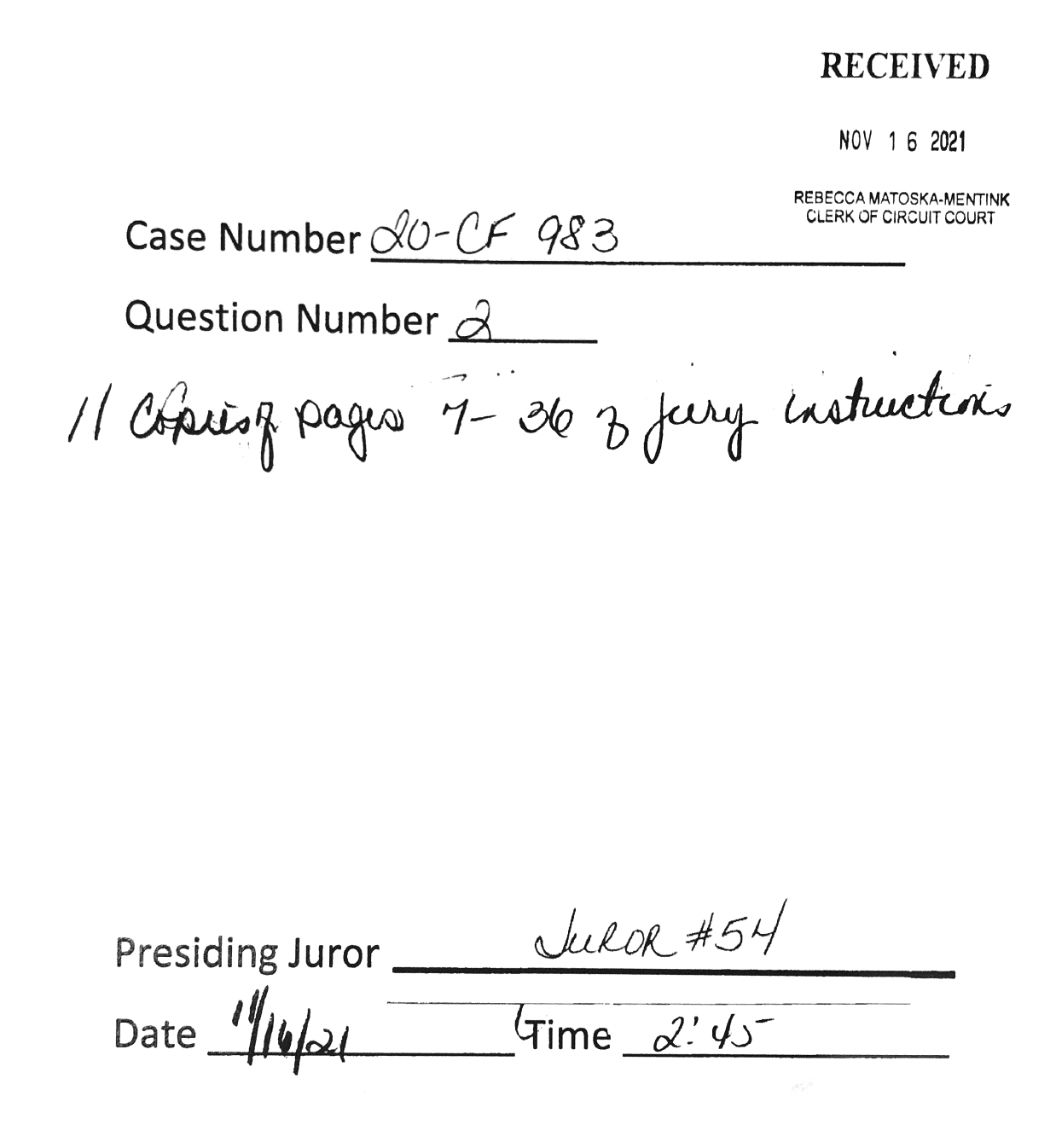 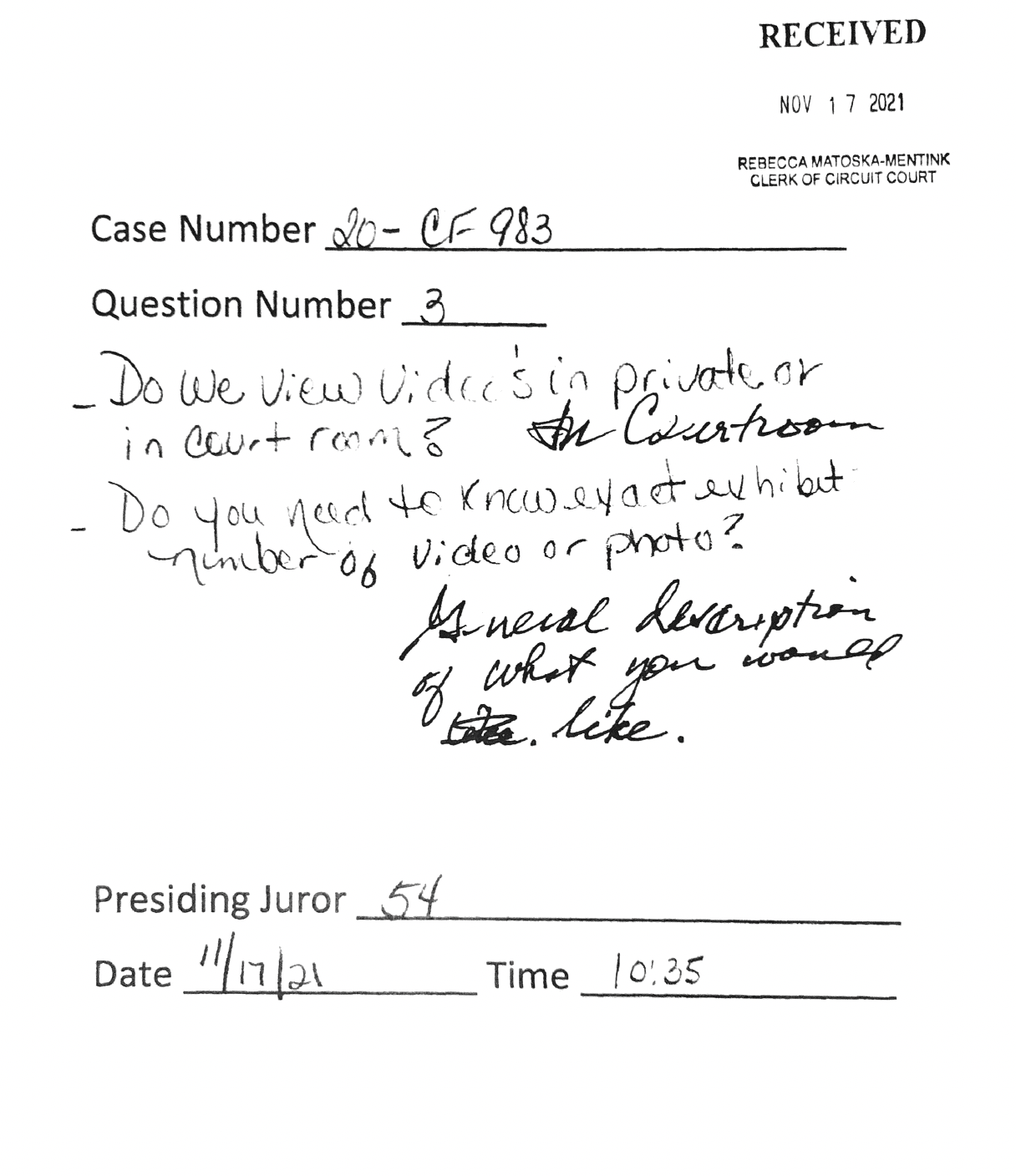 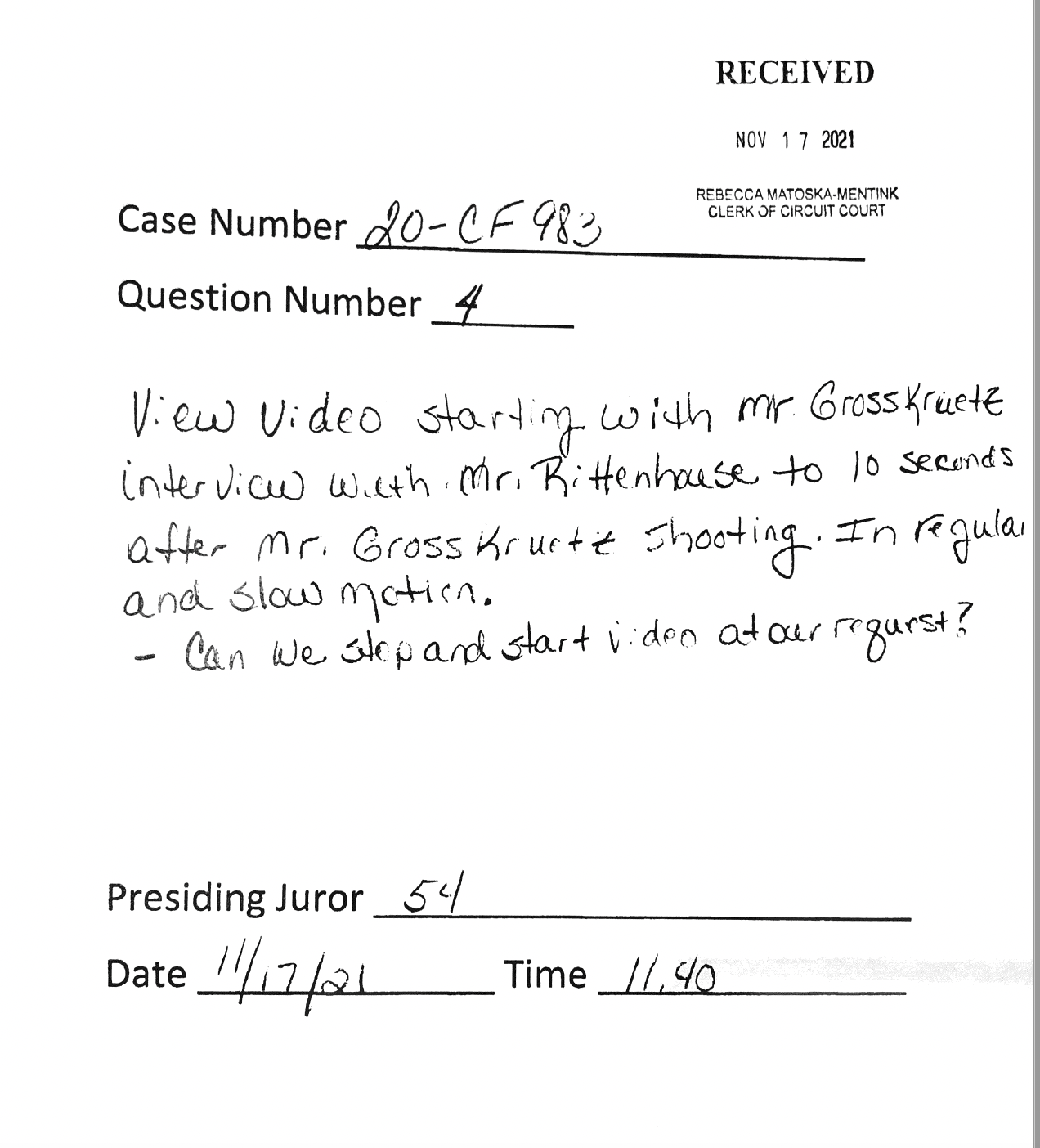 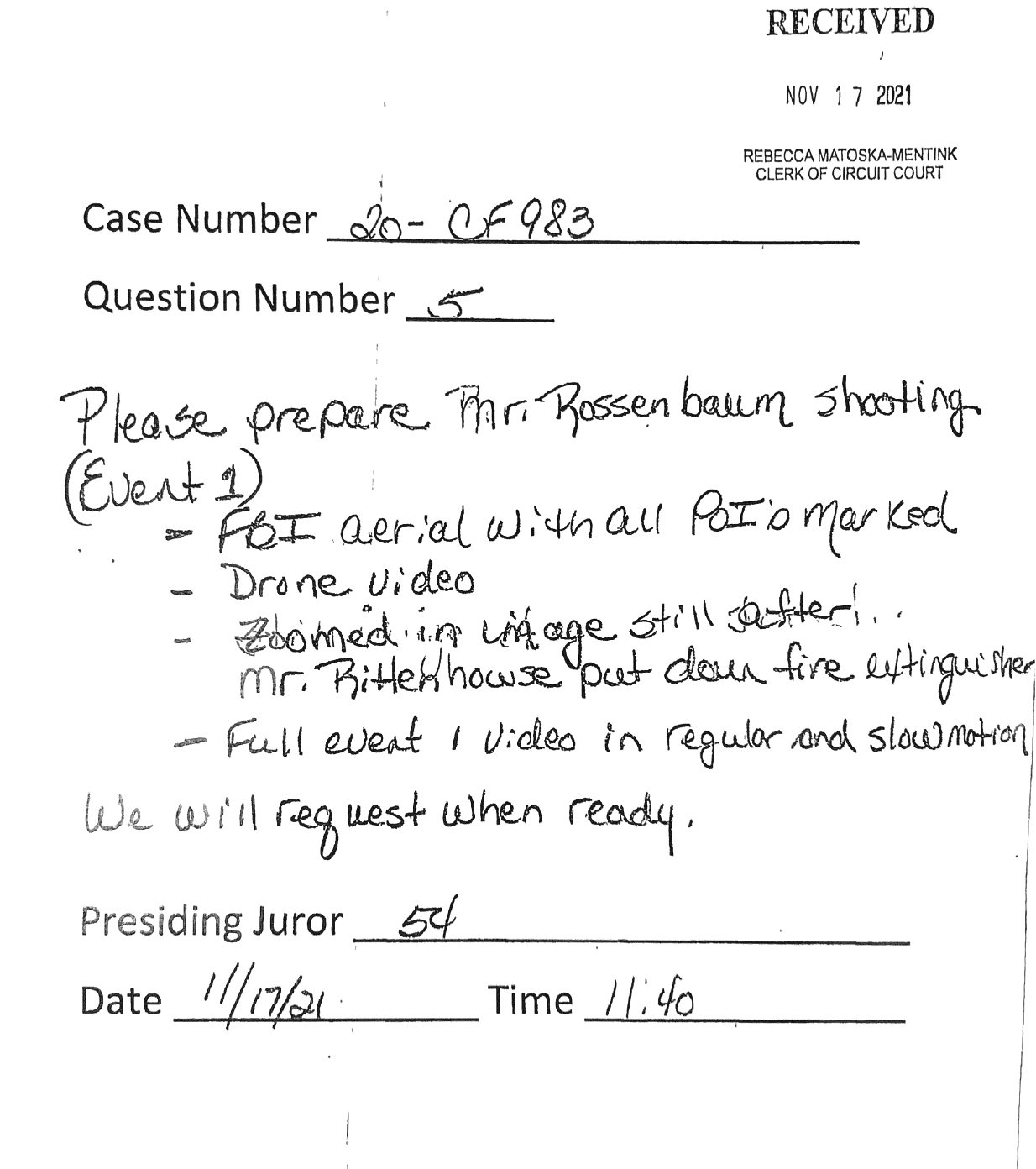 The 12-person jury, made up of five men and seven women, has been deliberating the five felony charges against Kyle Rittenhouse since Tuesday.

They have asked the court a handful of questions so far, including requests to rewatch much of the video evidence of the shootings.

One of those videos, a drone video showing Rittenhouse shooting Joseph Rosenbaum, is at the heart of a defense request for a mistrial in the case. The jury watched that video and FBI surveillance video Wednesday afternoon for 45 minutes in the courtroom.

Prosecutors received a high-definition version of the drone video mid-trial but Rittenhouse's defense team says it received a compressed, lower-quality version from the prosecution, which described it as a technical glitch. The defense learned about the discrepancy after testimony ended and so asked the judge to declare a mistrial.

The defense has also filed a motion for mistrial with prejudice — meaning the state would not be able to retry Rittenhouse — for intentional "prosecutorial overreach" related to the prosecution's line of questioning during Rittenhouse's testimony last week.

Judge Bruce Schroeder has not ruled on either motion.

The deliberations come after a two-week trial highlighted by emotional and compelling testimony from Rittenhouse, the 18-year-old at the center of debates around self-defense, gun ownership and Black Lives Matter demonstrations. On the stand, he told jurors — and the viewing public — that he acted in self-defense.

The jury will reconvene at 10 a.m. today for a third day of deliberations in the homicide trial of Kyle Rittenhouse. While we wait for the jurors to assemble, here's a look at the five felony counts against Rittenhouse.

Count 1: First-degree reckless homicide, use of a dangerous weapon

Wisconsin law allows the use of deadly force only if "necessary to prevent imminent death or great bodily harm."

Count 2: First-degree recklessly endangering safety, use of a dangerous weapon

Count 2 states Rittenhouse recklessly endangered the safety of Richard McGinniss — a journalist with the conservative Daily Caller — under circumstances that show utter disregard for human life.

Count 3: First-degree recklessly endangering safety, use of a dangerous weapon

Count 3 states Rittenhouse recklessly endangered the safety of an unknown male, referred to as "jump kick man" in court, under circumstances that show utter disregard for human life.

The man jumped at Rittenhouse at one point, trying to kick him and the teen opened fire. "I thought if I were to be knocked out, he would have stomped my face in if I didn't fire," he said. Rittenhouse fired at the man twice and missed.

Count 4: First-degree intentional homicide, use of a dangerous weapon

Count 4 states Rittenhouse caused the death of 26-year-old Anthony Huber, with intent to kill him. It's the most serious charge he faces, with a mandatory life sentence. Huber swung his skateboard at Rittenhouse after Rosenbaum was fatally shot.

Count 5: Attempted first-degree intentional homicide, use of a weapon

Count 5 states Rittenhouse attempted to cause the death of 27-year-old Gaige Grosskreutz, with intent to kill him.

Grosskreutz testified he pulled out his own firearm because he believed Rittenhouse was an active shooter.

Remember: A misdemeanor weapons charge was dismissed by the judge as proceedings opened Monday morning.