Our live coverage has ended, but you can scroll through the posts to read more about the Kobe and Gianna Bryant memorial service.

Mourners gathered at the Staples Center in Los Angeles today to honor the lives of Kobe Bryant and his 13-year-old daughter, Gianna.

In case you missed it, here are some of the key moments from today's service:

They held replicas of his jersey and chanted "Kobe." 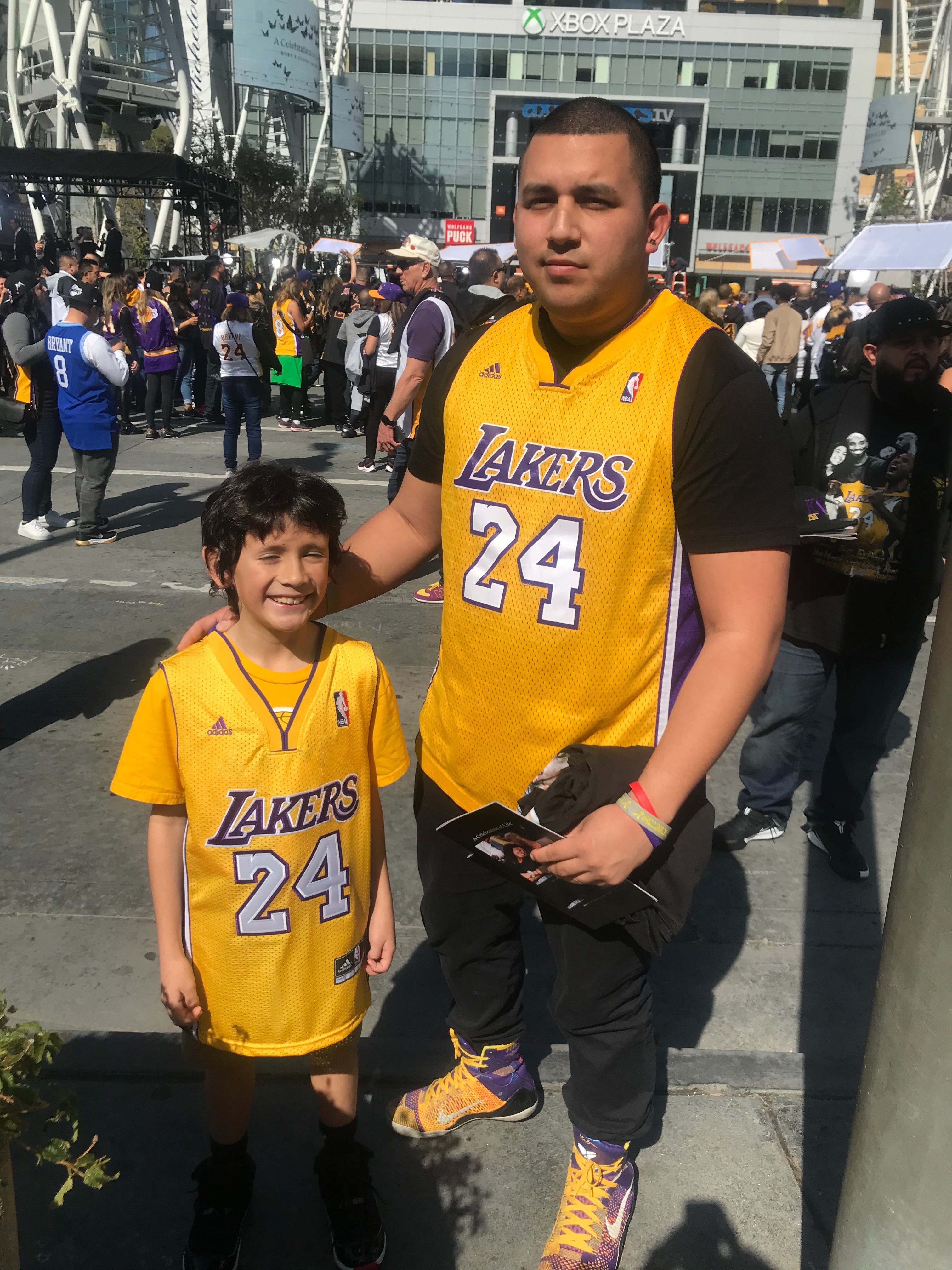 Michael Enriquez, from Santa Barbara, California, has been a Kobe Bryant fan all his life and was here for his jersey retirement ceremony. The memorial today, though, was vastly different.

“The jersey retirement was like a celebration for him,” he said. “This is just heartbreaking.”

Still he said it was a great experience to be here: “I’m never gonna forget it,” he said. He brought his son Michael, Jr., who said the event want "cool."

Meanwhile, Dianna Rodriguez, pictured below, said the event gave her a sense of peace — especially because his death was bigger than basketball.

“It was a way for everyone to ... accept what happened and accept his life,” she said. “I needed it for sure. I’ve been a mess the last month.”

Stacey Lopez said Kobe’s wife Vanessa’s speech was the most meaningful. “She speaks to every mother out there, every wife out there,” she said.

The NBA just tweeted out a photo of Kobe and Gianna Bryant with a heart.

The crowd at the Staples Center erupted with chants of "Kobe" as the memorial service for the late basketball player and his daughter came to an end.

Nat King Cole's "Unforgettable" played as a number of people waited in their seats, soaking in the final moments.

The six-time Grammy Award winner received a round of applause.

Shaquille O'Neal, Kobe Bryant's teammate and NBA Hall of Famer, talked about his years playing with Bryant on the Lakers, where they won multiple championships together.

"We fought and we bantered back and forth with offhanded remarks, but make no mistakes, and you folks thought we were on bad terms, and when the cameras were turned off we would wink at each other and said, 'let's go whip some ass.'"

Shaq told the Staples Center crowd about the day Kobe "gained my respect."

"Kobe and I always maintained a deep respect and love with one another. The day Kobe gained my respect was when the guys were complaining, and they said, Kobe's not passing the ball. I said I will talk to him. I said, Kobe, there's no "I" in team, and he said, I know, but there's a "Me" in that m**********r."

Shaq said he went back and told his teammates: "Just get the rebound, he's not passing."

NBA great Michael Jordan said Kobe Bryant's death had a huge impact on him and the world.

"When Kobe Bryant died, a piece of me died," Jordan said. "And as I look in this arena and across the globe, a piece of you died or else you wouldn't be here."

He then made a promise to Bryant: "I promise you from this day forward I will live with the memories knowing that I had a little brother that I tried to help in every way I could. Please, rest in peace, little brother."

Michael Jordan — who cried as he gave a tribute to Kobe Bryant — joked that there will soon be another crying Jordan meme.

A picture of Jordan crying has been used to ridicule losing teams and their fans.

"Now he's got me, and I'll have to look at another crying meme for the next—" he said, but was cut off from audience applause and cheers.

"I told my wife I wasn't going to do this 'cause I didn't want to see that for the next three or four years. But that is what Kobe Bryant does to me."