The helicopter that crashed yesterday in Calabasas, California, was operating under “Special Visual Flight Rules,” according to an air traffic control audio conversation with the pilot, captured by website LiveATC.net.

The Burbank Airport control tower allowed the helicopter to proceed northeast following the I-5 highway using the SVFR clearance.

“Maintain special VFR at or below 2,500” the pilot confirmed to the controller.

Later in the flight, the pilot apparently asked for “flight following,” a service where controllers are in regular contract with an aircraft. The controller was recorded telling the pilot “2 echo x-ray, you’re still too low level for flight following at this time.” That could mean the helicopter was too low to be seen on Air Traffic Control radar.

Satellite imagery showed the cloud cover at the time of the crash. Below, you can see the flight path in blue: 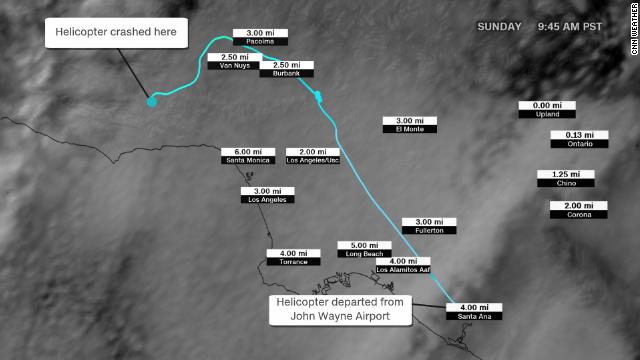 In his post, Beckham reflected on Bryant's career. "Sometimes I would only go to games just to watch that clock go down to the last 2:00 minutes knowing that we were about to witness something special," he wrote.

He added: "This was one special athlete, husband, father and friend."

At the 42nd Street-Bryant Park stop, someone posted "Kobe" on a sign, so it reads "Kobe Bryant Park."

California Rep. Maxine Waters said Los Angeles is "mourning the loss of one of our most beloved legends and icons" following the death of Kobe Bryant.

"Though Kobe Bryant is no longer with us, our city will never forget what he meant to us, and we will keep his legacy alive forever," she said in a statement.

“I am absolutely devastated and heartbroken by the sudden and tragic loss of Kobe Bryant and his beloved daughter Gianna. Kobe Bryant was a king in Los Angeles and one of the greatest athletes the world has ever known. He thrilled Los Angelenos for 20 seasons at the Staples Center, was an 18-time NBA All Star, earned five NBA championships, was twice named the MVP of the NBA Finals, and earned the NBA’s MVP award. Fans around the world marveled at his skills on the court season after season. He was truly spectacular to watch. He was our champion, a living legend, and an inspiration to countless fans and aspiring athletes around the world. His loss is felt by millions of grieving fans who are in shock and disbelief by the tragic passing of such a prolific athlete, devoted husband, and loving father. My heart goes out to his wife, Vanessa, surviving children, relatives, teammates, and friends who are in mourning. I also extend my sincere condolences to the families and loved ones of all the victims who were onboard the helicopter.
“Los Angeles is mourning the loss of one of our most beloved legends and icons. Though Kobe Bryant is no longer with us, our city will never forget what he meant to us, and we will keep his legacy alive forever.”

Spanish soccer giant Real Madrid held a minute's silence ahead of Monday's training session. The La Liga club posted a picture of the squad with heads bowed and forming a circle on the pitch.

As the world tries to come to terms with the crash that claimed the life of basketball superstar Kobe Bryant, fans and cities across the United States have been paying tribute to the NBA legend.

"Kobe just meant the world to me and all of us here in LA, growing up just idolizing somebody who dedicated their grind to their craft," one fan told CNN affiliate KABC.

"He always wanted to push to a higher level. You don't see that no more. I just appreciate everything you did Kobe, for real."

Los Angeles City Hall was lit up in Lakers purple and gold Sunday night to honor the player.

The city's airport was adorned in the same colors, with a post on its Twitter account saying, "Kobe was in many ways a symbol of Los Angeles and we join his family, fans and city in mourning all who were lost today."

And outside the Staples Center, where millions watched the icon play, fans gathered despite the additional security measures set up for the Grammy Awards taking place.

"We just didn't know where else to go," a group of fans told CNN affiliate KTLA.

To read more on how America has reacted to Bryant's death, click here.

Sarah Chester and her daughter Payton were also passengers aboard the helicopter, according to a Facebook post by Todd Schmidt who worked at Harbor View Elementary School, where Payton once attended.

“While the world mourns the loss of a dynamic athlete and humanitarian, I mourn the loss of two people just as important... their impact was just as meaningful, their loss will be just as keenly felt, and our hearts are just as broken,” Schmidt, the school's former principal, wrote in the Facebook post.

This story has been updated to reflect that Todd Schmidt no longer works at Harbor View Elementary School.

After his win, the 19-time grand slam champion spoke of Bryant's death.

"It is terrible news, I'm super sad," he told John McEnroe in an on-court interview.

"He was one of the greatest sportsmen in history and deserves a round of big applause.

"He always wanted to increase his level and was an inspiration to the world of sport and a lot of kids."

An assistant girls' basketball coach at a K-8 private school in Orange County has been identified as one of the passengers who died in a helicopter crash with Kobe Bryant.

Christina Mauser, an assistant coach at Harbor Day School in Corona del Mar, California, was mourned by her husband and the mayor of the Orange County city Costa Mesa.

“My kids and I are devastated. We lost our beautiful wife and mom today in a helicopter crash. Please respect our privacy. Thank you for all the well wishes they mean so much,” Christina’s husband Matt Mauser wrote on his Facebook page.

“I just learned that our amazing Matt Mauser of TiajuanaDogs lost his wife Christina in the crash. She coached the girls team. This devastating tragedy gets worse by the hour. So much pain for so many local families. Our hearts are broken & grieving for the families impacted,” Costa Mesa Mayor Katrina Foley wrote on Twitter.