House Speaker Nancy Pelosi has called John Lewis "one of the greatest heroes of American history" and "the conscience of the Congress" in a statement mourning his passing.

“John Lewis was a titan of the civil rights movement whose goodness, faith and bravery transformed our nation – from the determination with which he met discrimination at lunch counters and on Freedom Rides, to the courage he showed as a young man facing down violence and death on Edmund Pettus Bridge, to the moral leadership he brought to the Congress for more than 30 years," she wrote.

“In the Congress, John Lewis was revered and beloved on both sides of the aisle and both sides of the Capitol. All of us were humbled to call Congressman Lewis a colleague, and are heartbroken by his passing. May his memory be an inspiration that moves us all to, in the face of injustice, make ‘good trouble, necessary trouble.'"

Here's a look at the life of US Rep. John Lewis (D-Ga.), a civil rights leader.

Lewis' skull was fractured in 1965 during an attempted voting rights march from Selma, Alabama, to Montgomery, Alabama.

By his own count, Lewis was arrested more than 40 times during his days of civil rights activis.

May 1961: Volunteers as a Freedom Rider, challenging bus and rail segregation laws.

August 28, 1963: Keynote speaker at the March on Washington.

March 7, 1965: Helps organize a voting rights march from Selma to Montgomery and is among 600 demonstrators attacked by police. This day becomes known as Bloody Sunday.

March 21-25, 1965: Joins over 3,000 demonstrators marching from Selma to Montgomery, this time under the protection of federal troops. The size of the group reaches 25,000 by the time they reach Montgomery.

1966: Co-founds the Southern Coordinating Committee to End the War in Vietnam.

1987-2020: Serves in the US House of Representatives for Georgia's 5th District.

1988: Lewis' memoir, "Walking with the Wind: A Memoir of the Movement," is published.

March 7, 2004: The John R. Lewis Monument is unveiled in Selma, Alabama, at the foot of the Edmund Pettus Bridge to commemorate the events of Bloody Sunday.

April 27, 2009: Arrested outside the Embassy of Sudan, where he is protesting the obstruction of aid to refugees in Darfur.

August 2013: Top Shelf Productions publishes "March: Book One." The graphic novel is the first of a planned trilogy, written by Lewis and Andrew Aydin, and illustrated by Nate Powell.

June 22, 2016: Lewis leads a sit-in on the House floor to protest inaction on gun control and try to push a vote preventing people on the terrorist watch list from buying guns. The demonstration draws 170 lawmakers. After about 25 hours, Democrats decide to end the sit-in, but vow to continue when Congress returns for their next session.

January 13, 2017: In an interview with NBC News, Lewis says he does not view President-elect Donald Trump as a legitimate president due to evidence of Russian meddling during the run-up to the election. He says he will not attend the inauguration -- the second time he's boycotted an inauguration in protest. In 2001, he declined to attend the inauguration of George W. Bush, who won a close election after the Supreme Court halted a recount in Florida. Bush won the Electoral College even though Vice President Al Gore topped him in the popular vote.

January 14, 2017: Trump criticizes Lewis in a threaded tweet, "Congressman John Lewis should spend more time on fixing and helping his district, which is in horrible shape and falling apart (not to mention crime infested) rather than falsely complaining about the election results. All talk, talk, talk - no action or results. Sad!" Lewis responds with a statement encouraging donors to pledge money to the Democratic National Committee, adding: "Today, Donald Trump attacked me on Twitter. He said that I'm 'all talk' and 'no action.' I've been beaten bloody, tear-gassed, fighting for what's right for America. I've marched at Selma with Dr. King. Sometimes that's what it takes to move our country in the right direction."

July 28, 2018: Becomes ill while on a flight to Atlanta. Spends one night in hospital for undisclosed reasons and is released the next day with a "clean bill of health," according to his spokeswoman.

December 29, 2019: In a statement, Lewis announces he has stage 4 pancreatic cancer.

Former President Bill Clinton and Secretary of State Hillary Clinton have issued a tribute to John Lewis, saying: "We have lost a giant."

"John Lewis gave all he had to redeem America’s unmet promise of equality and justice for all, and to create a place for us to build a more perfect union together," the statement continued.
"From a small farm in Alabama, to life-risking service in the civil rights movement, to three decades in Congress, he was always 'walking with the wind,' steered by a moral compass that told him when to make good trouble and when to heal troubled waters. Always true to his word, his faith, and his principles, John Lewis became the conscience of the nation.
"Hillary and I loved John. We were blessed by his friendship, support, and wise counsel. We’ll miss him so much, but we’ll always be grateful to God for his long good life, and grateful that he lived to see a new generation of Americans take to the streets in search of his long sought 'beloved community.'
"Our hearts go out to his son John-Miles and the entire Lewis family, his able loyal staff, and all who loved and admired him the world over."

"John Lewis was an American treasure. He gave a voice to the voiceless, and he reminded each of us that the most powerful nonviolent tool is the vote. Our hearts feel empty without our friend, but we find comfort knowing that he is free at last."

The family of John Lewis has issued a statement on his passing:

"It is with inconsolable grief and enduring sadness that we announce the passing of U.S. Rep. John Lewis. He was honored and respected as the conscience of the US Congress and an icon of American history, but we knew him as a loving father and brother. He was a stalwart champion in the on-going struggle to demand respect for the dignity and worth of every human being. He dedicated his entire life to non-violent activism and was an outspoken advocate in the struggle for equal justice in America. He will be deeply missed."

"John Lewis guided us toward a more righteous world. He marched in Selma, he marched on Washington—he marched for us all. His life's work shaped our history and his legacy inspires us to continue the march for racial equity and justice."

Martin Luther King Jr.'s daughter Bernice King mourned the passing of US Congressman John Lewis, writing on Twitter: “You did, indeed, fight the good fight and get into a lot of good trouble."

"You served God and humanity well," she posted. "Thank you. Take your rest."

Ted Cruz, US Senator for Texas, has posted a tribute to John Lewis on Twitter.

"Tonight, the world grieves for the great John Lewis. In my 1st yr in the Senate, I had the privilege of traveling w/ John & much of the Congressional Black Caucus to Nelson Mandela’s funeral. The entire trip to Johannesburg, John regaled us w/ stories of being alongside Dr. King." 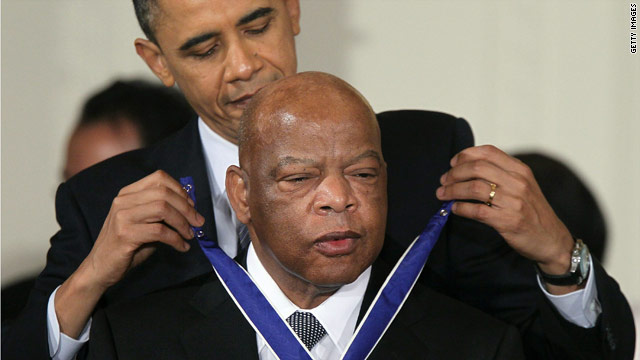 The civil rights icon described the honor as “unreal.”

"Generations from now, when parents teach their children what is meant by courage, the story of John Lewis will come to mind,” Obama said. “An American who knew that change could not wait for some other person or some other time; whose life is a lesson in the fierce urgency of now.”

Asked what it was like to receive such an award from the first African American president, Lewis said he felt blessed.

“I started thinking about the first time I came to Washington in May of 1961 to go on the freedom rides. Then I came back here in June of 1963 to meet with President Kennedy, with Dr. King and several others. And I just kept thinking, ‘I wish Dr. King were here,’” he said.