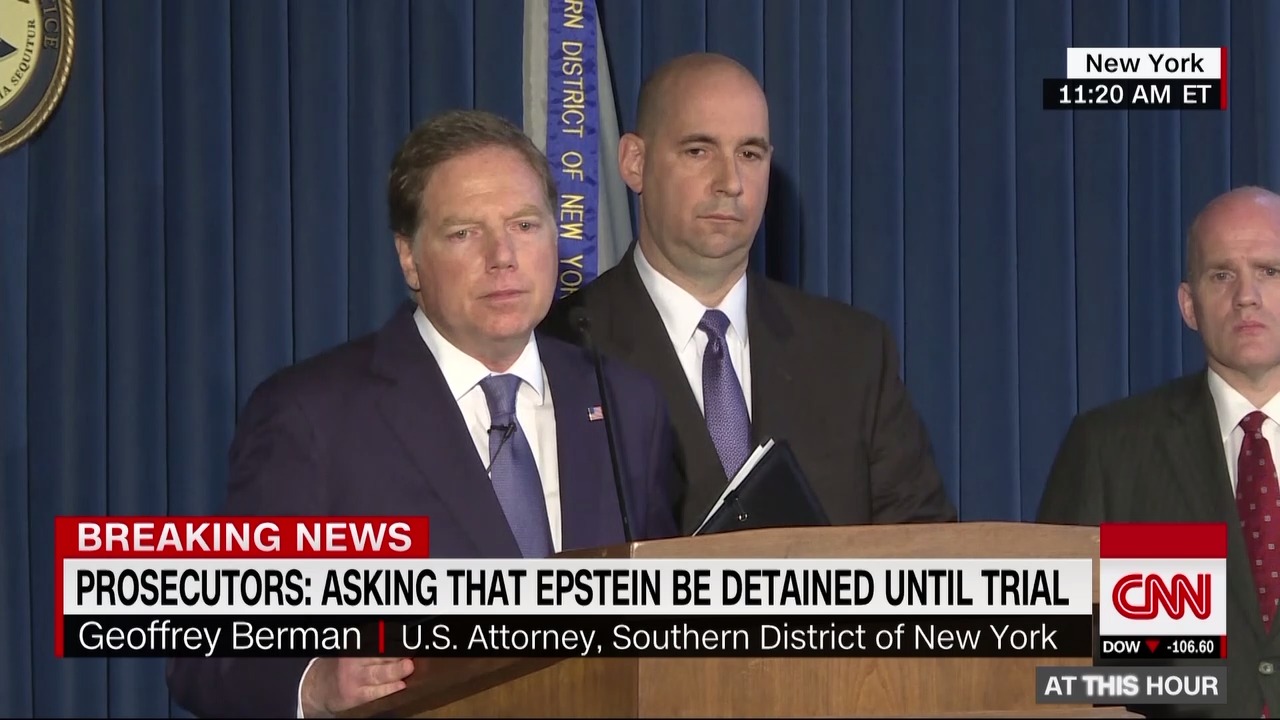 Geoffrey Berman, US Attorney for the Southern District of New York, said the charges against Jeffrey Epstein carry a maximum sentence of 45 years in prison.

"The charges are very serious, and they carry a maximum of 45 years in jail, which to someone of Epstein's age is basically a life sentence," he said.

Berman said Epstein is a "significant flight risk" because of both his "enormous wealth" and because of the seriousness of the charges.

"We think he has every incentive to try and flee the jurisdiction. And when you have two planes and you live much of the year abroad, you know, we think that's a very real risk," he said. 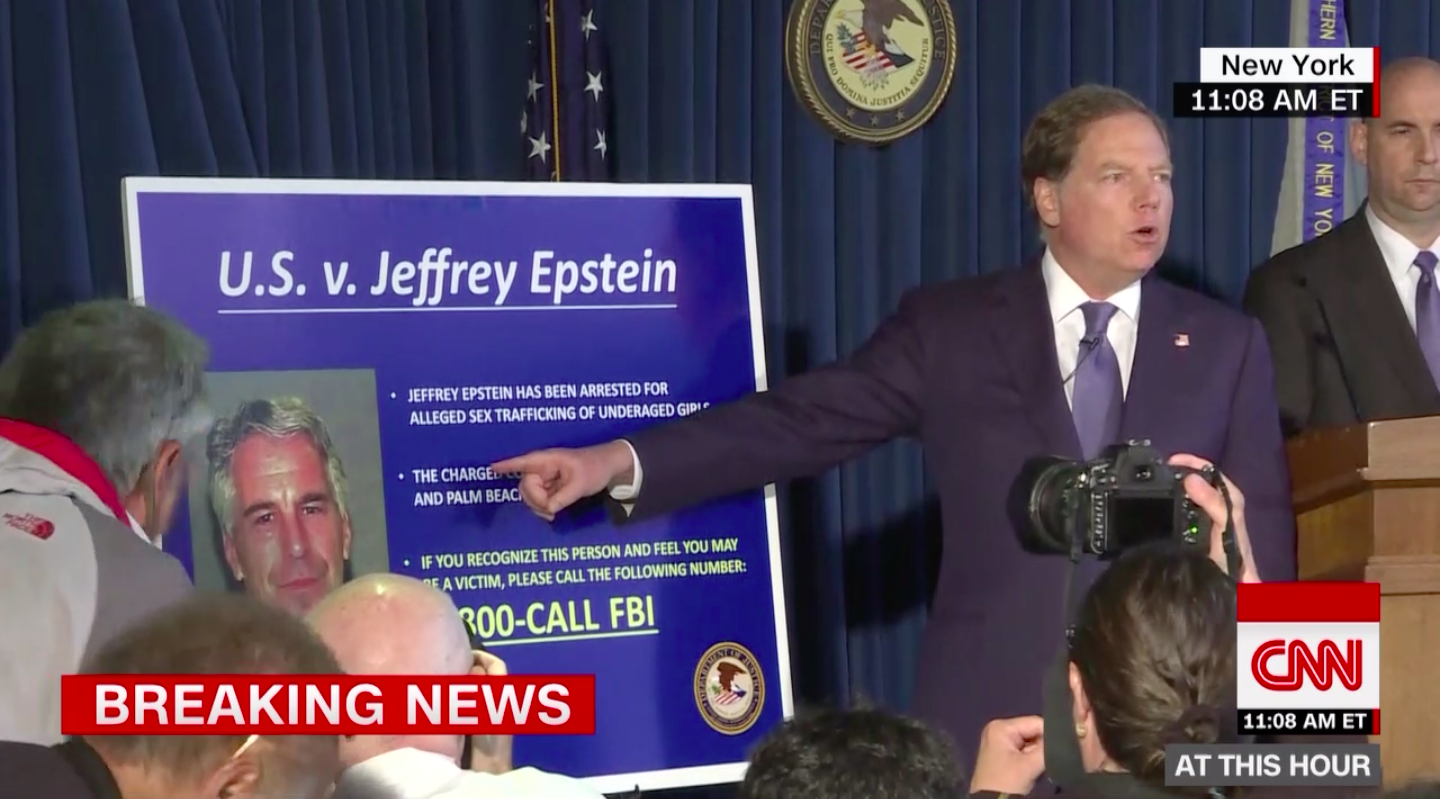 Prosecutors are calling for other victims or anyone with information about Jeffrey Epstein to come forward.

“If you believe you are a victim of this man, Jeffrey Epstein, or you have evidence or information relating to the conduct alleged in the indictment unsealed today, we want to hear from you," Geoffrey Berman, the US Attorney for the Southern District of New York, said.

Epstein is charged with operating a sex-trafficking ring and paying young girls to engage in sex acts. Berman said his office is proud to bring the indictment and stand up for victims.

“While the charged conduct is from a number of years ago, the victims – then children and now young women – are no less entitled to their day in court,” he said. 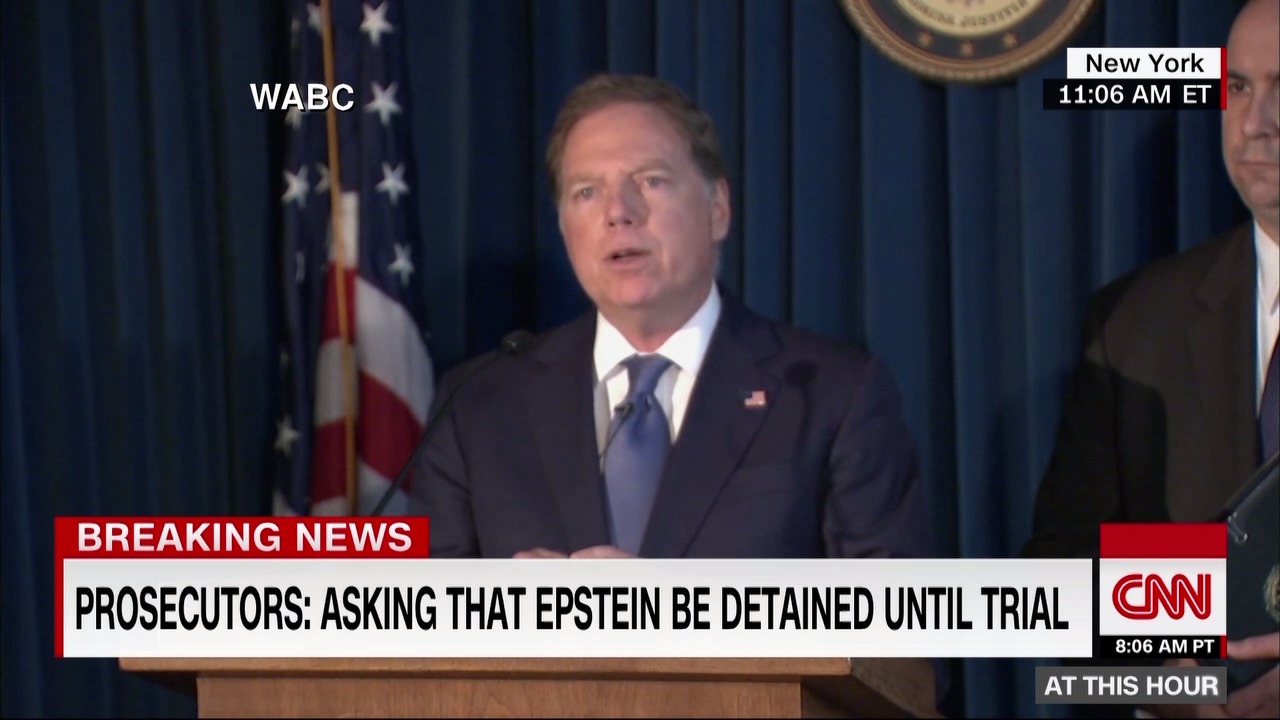 Prosecutors are asking that Jeffrey Epstein be detained until trial, Geoffrey Berman, US Attorney for the Southern District of New York, said at a news conference.

Berman said Epstein is being held at Metropolitan Correctional Center in Manhattan. He was arrested on Saturday at the Teterboro Airport in New Jersey. His private plane had just landed from Paris, France.

An attorney for three alleged Jeffrey Epstein victims said his clients are "very gratified" by the indictments.

Attorney David Boies represents three women who have publicly shared allegations of abuse by Epstein – some of whom were minors during the time of the crimes.

“It’s a great step forward. This one is something that was a long time coming — too long," he told CNN. "It is a great step towards getting justice for these victims, and the prosecutors in New York deserve a lot of credit for putting this together."

Boies continued: “This indictment is important on two levels: first and most important it is a big step towards getting justice for the many victims of Epstein’s sex trafficking ring. Second it’s also important because it is a correction of what should have happened 10 years ago. The Justice Department is now doing what it can to make things right.”

Boies would not confirm if his clients were the victims explicitly mentioned in the indictment, however, details laid out in the indictment match up with information they have submitted as part of lawsuits against Epstein and his associates over the past decade.

Federal prosecutors want to seize Epstein's Manhattan mansion, according to the indictment that was unsealed Monday.

The indictment states that Epstein "shall forfeit" any property that was "used to commit or facilitate" crimes laid out in the indictment. The court documents specifically reference Epstein's Upper East Side home in the forfeiture allegations. 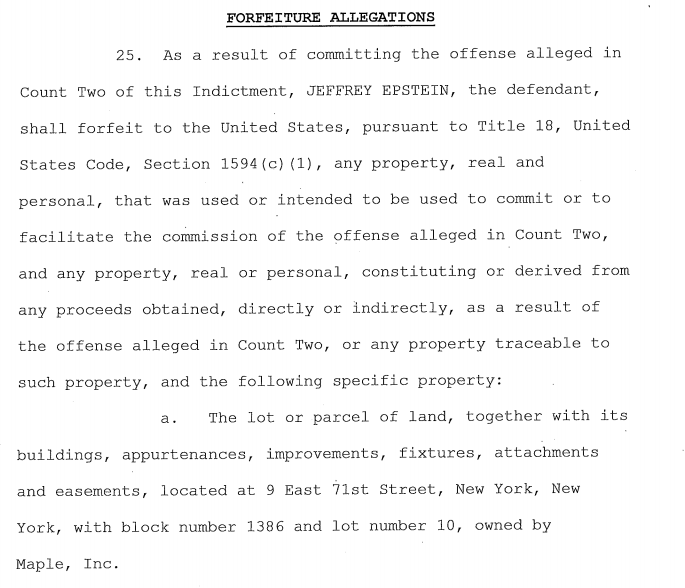 According to the newly unsealed indictment, Epstein allegedly paid hundreds of dollars in cash to girls as young as 14 to have sex with him at his Upper East Side home and his estate in Palm Beach.

The indictment says Epstein would sometimes personally reach out to girls to schedule appointments at his residence in New York, and other times he directed his employees to talk to girls to arrange the sexual encounters.

The indictment also implicates some of Epstein's employees — one of whom, referred to only as "Employee-1" — called girls who had previously been lured into encounters with Epstein to arrange future visits to his New York residence.

When Epstein would travel by private jet from New York to Palm Beach, an employee or associate would "ensure that minor victims were available for encounters upon his arrival in Florida," according to the indictment.

Jeffrey Epstein paid young girls hundreds of dollars to give him nude or partially nude "massages," according to an indictment.

The document alleges that during the massage, Epstein would escalate the encounter to "include one or more sex acts."

The indictment said that sometimes, Epstein would personally reach out to girls to schedule appointments at his residence in New York, and other times he directed his employees to talk to girls to arrange the sexual encounters.

Epstein is charged with operating a sex trafficking ring and expected to appear in court Monday.

Federal prosecutors in New York unsealed a criminal indictment Monday charging billionaire Jeffrey Epstein with having operated a sex trafficking ring in which he sexually abused dozens of underage girls, allegations that have circulated around the politically connected businessman for years.

According to the indictment, between 2002 and 2005, Epstein ran a trafficking enterprise in which he paid hundreds of dollars in cash to girls as young as 14 to have sex with him at his Upper East Side home and his estate in Palm Beach, worked with employees and associates who would lure the girls to his residences and paid some of his victims to recruit other girls for him to abuse.

“In this way, Epstein created a vast network of underage victims for him to sexually exploit, often on a daily basis,” the US Attorney’s office said in a press release.

Billionaire Jeffrey Epstein is expected to be charged with having operated a sex trafficking ring, a law enforcement source tells CNN.

Here's what's in the indictment, according to the source: