Isaias lashes the US East Coast

Our live coverage has ended, but you can follow Isaias' path here.

A second storm-related death has been confirmed in Bertie County, North Carolina, after a tornado touched down at a mobile home park overnight, according to a news release from the county.

The tornado touched down just after 2 a.m. ET at the Cedar Landing mobile home community in Windsor, North Carolina, the release stated.

Task force teams are on the ground assisting in the search and rescue efforts, the county said.

According to CNN affiliate WCTI, three people remain unaccounted for.

There are now more than a million customers without power from the strong winds and tornadoes associated with Isaias, according to PowerOutage.US.

New Jersey is currently the most impacted area with more than 325,000 customers impacted. Virginia is a close second, with nearly 300,000, followed by North Carolina, with nearly 230,000 and Maryland and Pennsylvania both over 100,000.

More tornadoes are highly likely as Isaias continues to track through the Northeast Tuesday.

Most hurricanes and tropical storms are good at producing tornadoes because they cause a lot of vertical shear — or differences in wind direction and speed at different heights.

Tornadoes caused by hurricanes "are generally smaller, weaker, and shorter-lived than traditional tornadoes you see across Tornado Alley," the wide stretch of the Midwest and southern Plains that frequently gets pummeled by twisters, says CNN meteorologist Brandon Miller.

But they can spin up very quickly and with little warning.

It is good to be prepared and close a safe space when you are within a tornado watch. This way, when a warning is issued, you can get out of harm's way.

New York Gov. Andrew Cuomo issued a lengthy advisory detailing steps the state is taking as Isaias gains traction on the US coast. Ahead of the storm, Covid-19 emergency operations centers have been coordinating with weather state response teams.

"Tropical Storm Isaias has started moving through New York, bringing with it strong winds, torrential rain and the potential for flash flooding that can cause major disruptions, and I'm urging New Yorkers, particularly those directly in Isaias' path, to stay calm, be smart and avoid unnecessary travel," Cuomo said

Here are some key details:

You can read more of the advisory here.

Murphy said residents should expect wind gusts in excess of 40mph statewide, with winds up to 70mph possibly along the shore.

The state is also under a tornado watch, Murphy said. The governor warned that "many of hundreds of thousands of power outages" may result from the fast moving storm.

Jared Maples, head of the state's Office of Homeland Security and preparedness, also warned New Jersey residents to be cautious of where they get their information.

There is a car pulled trailer ban instituted on highways as of now, officials said.

The storm is expected to bring strong winds, heavy rainfall and possible tornadoes as it continues to move northward.

Much of the Mid-Atlantic and New England coast remains under a tropical storm warning.

Here's a look at the latest forecast for Isaias: 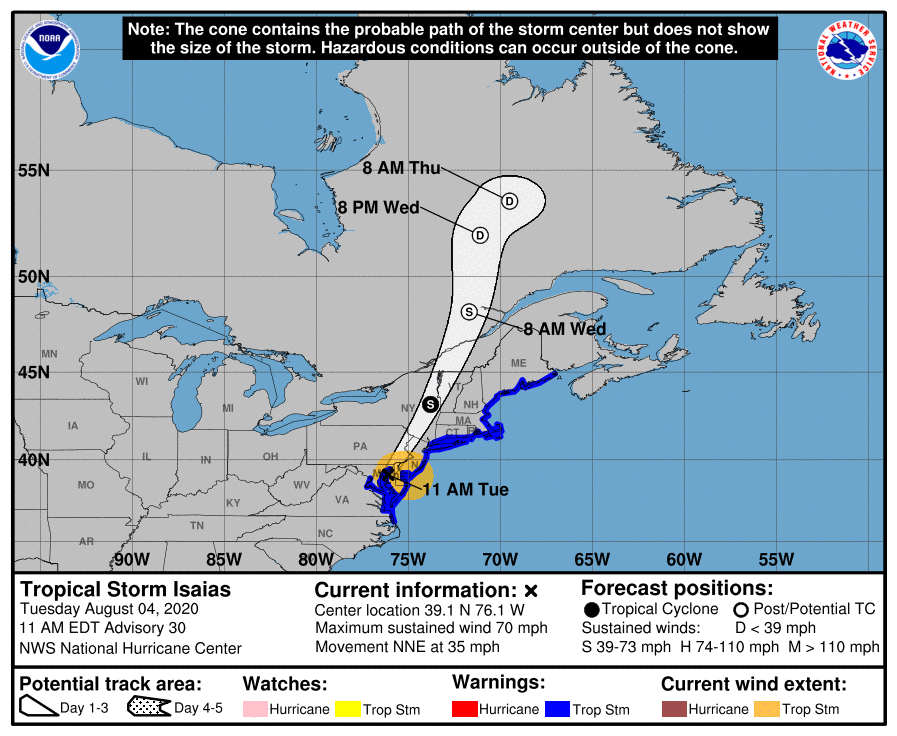 The Dover, Delaware mayor has issued a State of Emergency for the city – including asking individuals to stay in their homes and avoid unnecessary travel, according to verified social media for the police department.

The police are asking individuals to be mindful of downed wires as its taken numerous calls from throughout the city. The city of Dover serves over 38,000 people according to the latest census data.

Here is the full statement from the police:

Further details to come, but as of 9:30 a.m., the Mayor has issued a State of Emergency for the City of Dover which includes driving restrictions. We are asking you to stay in your homes and avoid unnecessary travel. If your vehicle is parked on the street where trees are down, please move it if possible to help our utility and cleanup crews. PLEASE BE MINDFUL OF DOWNED WIRES!!! We have taken numerous calls from throughout the city. Further details on the State Of Emergency restrictions are forthcoming

New York City Mayor Bill de Blasio is warning residents to take precautions as the city prepares for heavy rain, high winds and flooding potential along with a threat of tornadoes.

The mayor said his most important message is “everyone take this very seriously.”

The storm has shifted to the west which means the strongest wind band will track right over New York City according to Office of Emergency Management Commissioner Deanne Criswell.

The city will experience sustained 45-55 mph, which is up 10 mph from predictions Monday, and there are still gusts up to 70 mph expected between noon and 5 p.m. ET today.

While a tornado watch has been issued until 4 p.m. ET, Criswell said it’s likely tornado warnings will be issued and people should seek immediate cover away from window and move to lower floors. If you are in a high rise, which are common in parts of the city, go towards the inside of a building. People should not use elevators.

“That is such a rarity here in New York City,” the mayor said Tuesday. “It is something to worry about.”

Coastal flood warnings have been issued for Staten Island, Brooklyn and southern Queens and coastal flood advisories issued for Manhattan and the Bronx.

Areas which often see tidal flooding on roads may see one to two feet of water above ground. Many of these areas are in Queens.

Around the time the video was taken, the National Weather Service issued a tornado warning, saying trained spotters had seen a tornado near Ocean City.

WARNING: The video below contains some profanity.