Isaias heads toward the Carolinas

Our live coverage has ended for the evening, but you can follow Isaias' path here. 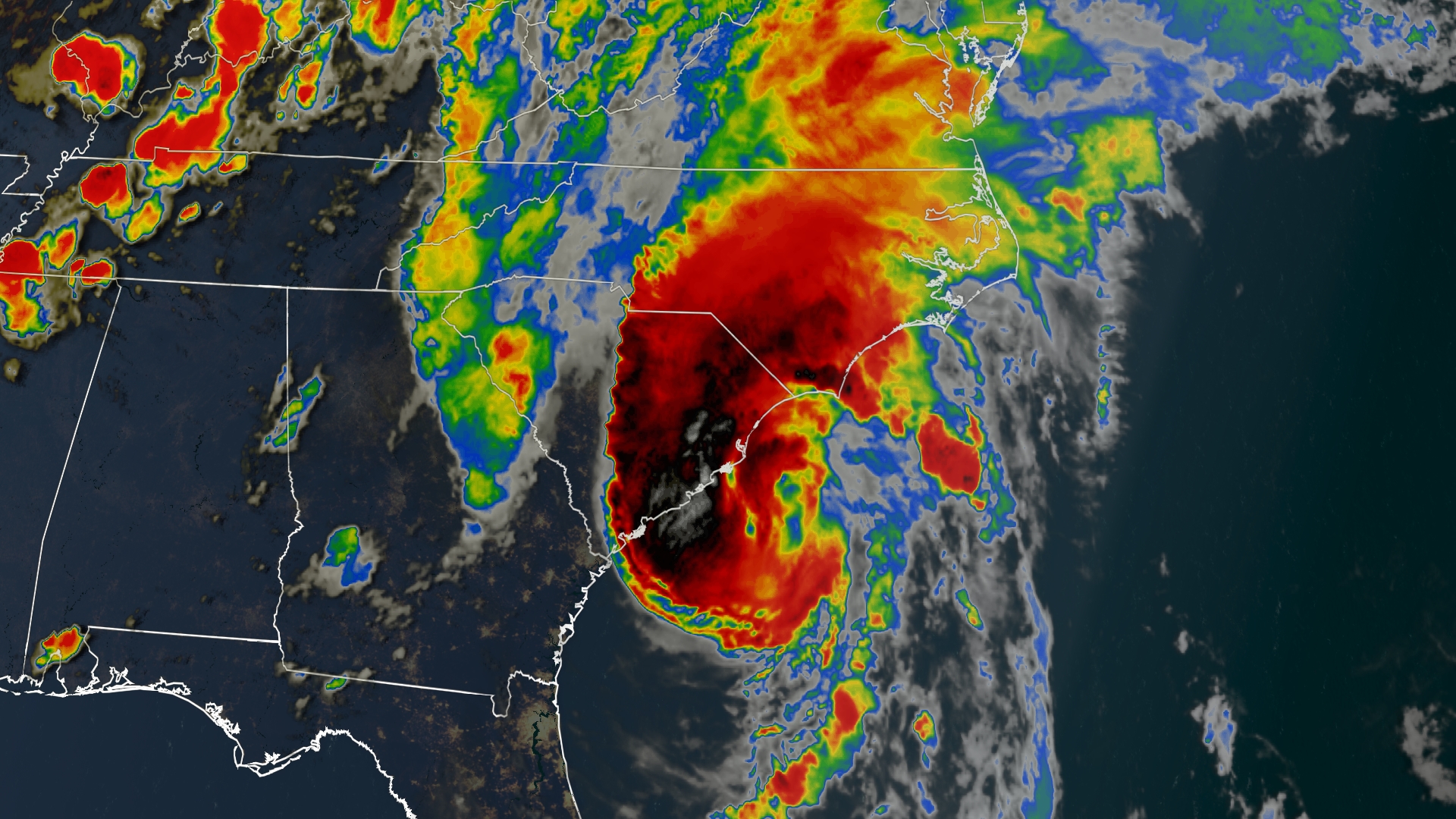 Isaias has strengthened back to a hurricane and now has sustained winds of 75 mph, according to the National Hurricane Center.

The storm is accelerating toward landfall near the North Carolina/South Carolina border.

Landfall is expected, as a hurricane, around the midnight hour.

The upgrade to a hurricane was expected and the anticipated impacts have not changed significantly. Coastal flooding from storm surge, minor wind damage, and inland flooding from heavy rainfall is still likely to occur in the Carolinas tonight.

The threat of tropical storm-force winds and flooding will continue through the mid-Atlantic and into the Northeast during the day on Tuesday.

A tornado watch has been issued for parts of the Carolinas due to Tropical Storm Isaias.

Here are some of the wind gusts logged this evening: 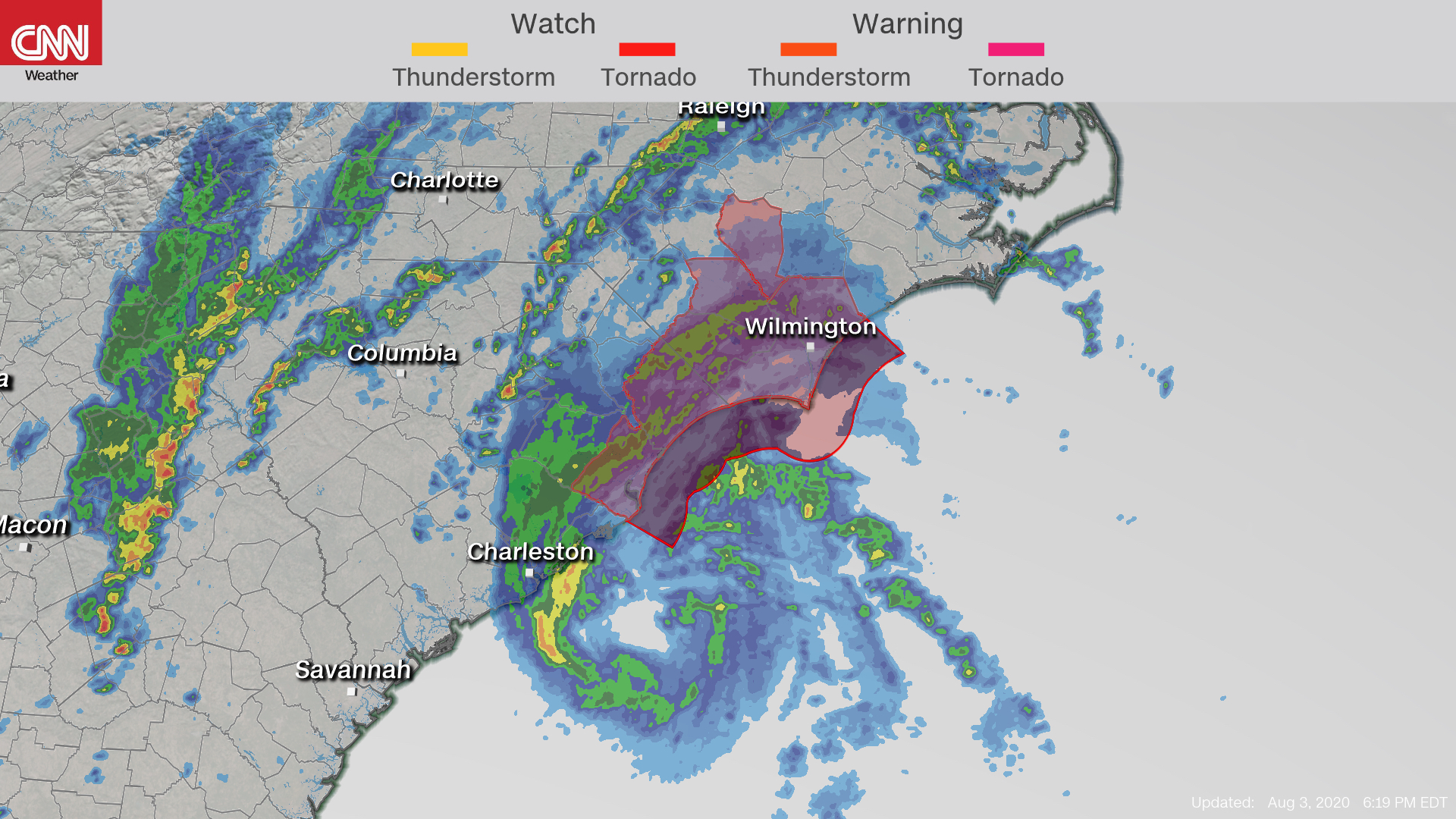 A tornado watch has been issued for southeastern North Carolina and northeastern South Carolina due to Tropical Storm Isaias.

The storm is very near hurricane status, the center said.

The storm should make landfall near the South Carolina and North Carolina border.

It should be emphasized that there is little difference between a strong tropical storm or a category 1 hurricane in terms of impacts, the center said.

Here's a look at the areas currently under watches and warnings: 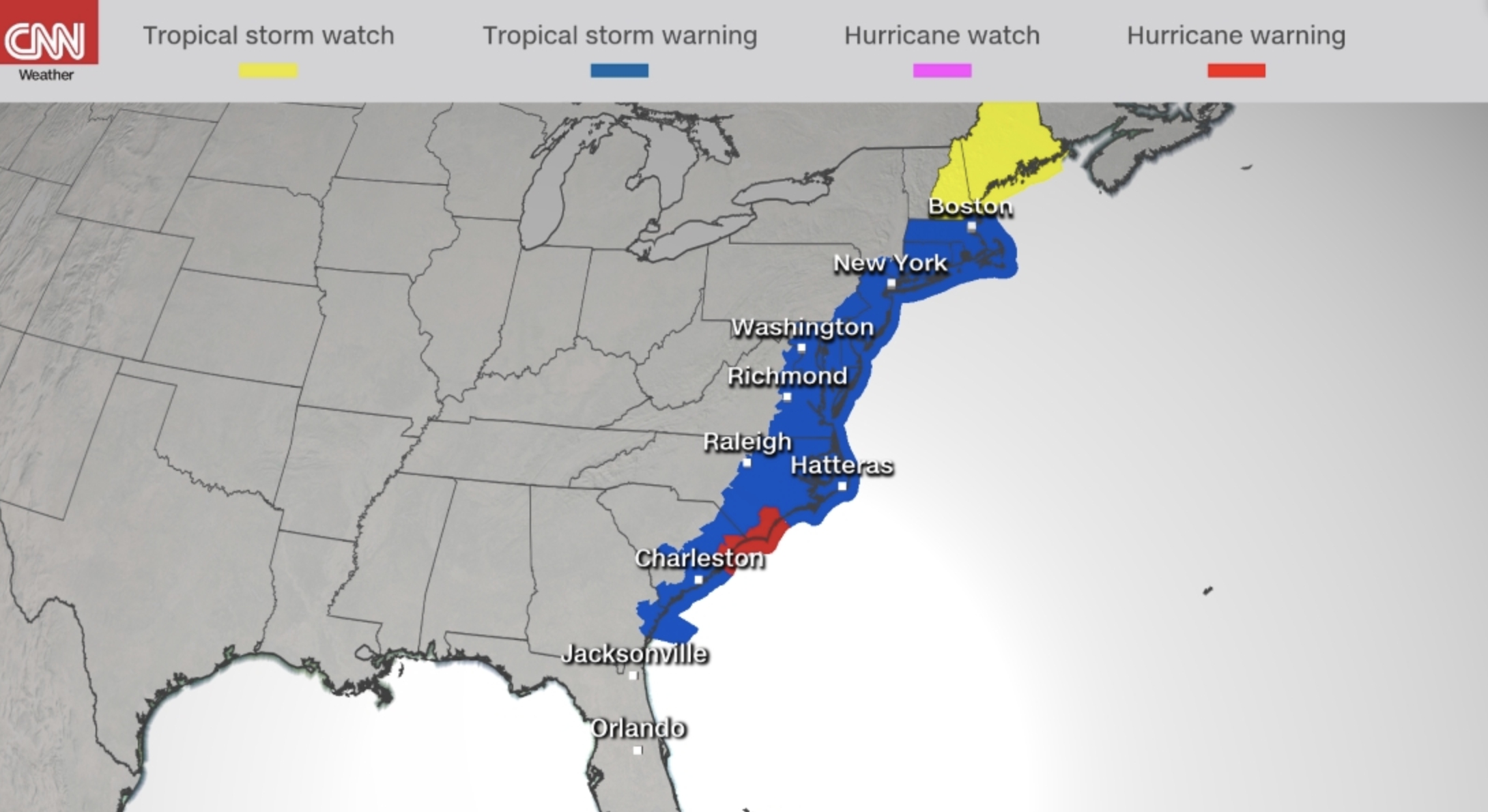 Shelters in North Carolina will be open with social distancing and plenty of personal protective equipment, Gov. Roy Cooper said in a news conference this afternoon as the state readies for Isaias to make landfall this evening.

Cooper said that there will be temperature checks at the shelters, and anyone showing Covid-19 symptoms or testing positive will be directed to another shelter that will be used for patients and where they can be isolated.

He warned residents to be prepared as Isaias moves in overnight. The tropical storm is expected to strengthen into a hurricane before it makes landfall tonight, and hurricane warnings have been issued for three counties in North Carolina – Brunswick, New Hanover and Pender, Cooper said.

A National Oceanic and Atmospheric Administration satellite caught images of Tropical Storm Isaias traveling up the US East Coast this afternoon.

The satellite images showed flashes of lightning inside the storm, which is forecast to become a hurricane before it makes landfall.

Tropical Storm Isaias continues to fluctuate in intensity, and the National Hurricane Center says this has been happening on an 8-hour cycle.

This morning it showed some weakening before 11 a.m. almost right on schedule. This means that if it continues on this pattern, it will have had this afternoon to strengthen as it approaches South and North Carolina, with landfall possible around 8 p.m.

According to Ross Dickman, the meteorologist-in-charge of the weather service in New York City, the storm could bring the strongest winds to the metro area since Superstorm Sandy almost eight years ago.

The peak wind gust at John F. Kennedy International Airport during Sandy was 69 mph on October 29, 2012. The current forecast calls for a peak wind gust on Tuesday afternoon of 69 mph in New York City.

Dickman said that “the wind and flooding impacts from Isaias will be similar to what the city has seen from some of the strongest coastal storms,” such as nor’easters – “but we haven’t seen one this strong in many years.”

One key difference between the forecast for Isaias and what was experienced in Hurricanes Irene and Sandy will be the direction of the winds.

“The track for Isaias is west of the city, which will mean wind direction is from the southeast, south and southwest,” Dickman said. “Rarely do we see the strongest winds from this direction…normally, they come from the northeast and northwest.”

Dickman explained this will likely result in worse damage and power loss from downed trees, as “vulnerable vegetation has not experienced winds like this in a long time.”

Tropical Storm Isaias is off Georgia's coast, according to the National Hurricane Center's 2 p.m. ET update.

Isaias is still expected to strengthen into a hurricane tonight before it makes landfall, the center said.

"Strong winds and heavy rainfall likely from the Eastern Carolinas to the Mid-Atlantic coast tonight and Tuesday," the latest advisory read.

Here's a look at the areas currently under watches and warnings: 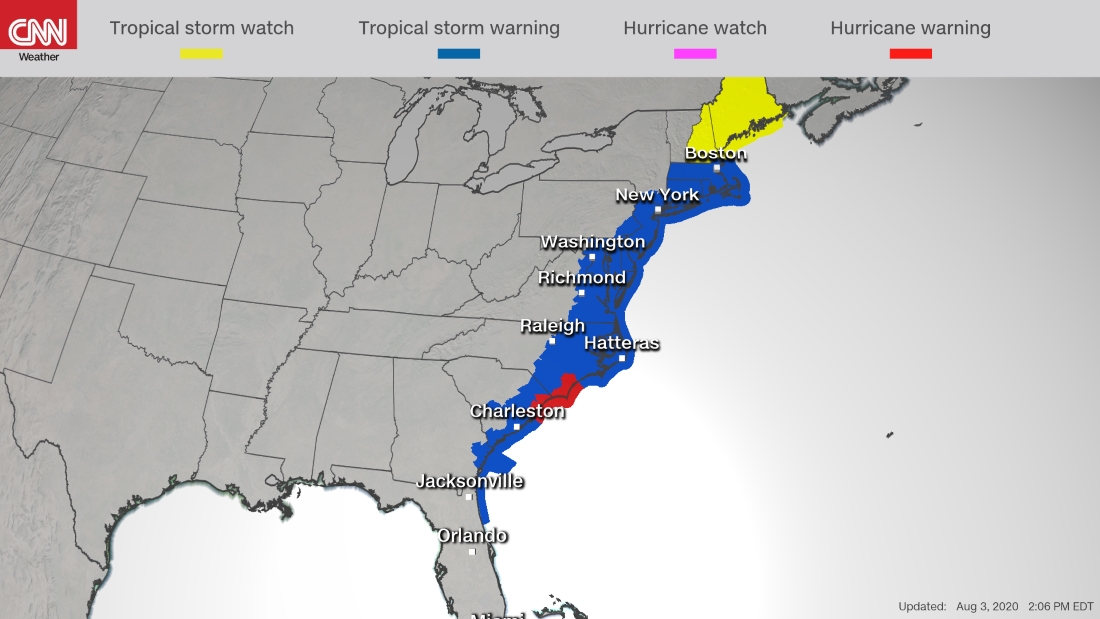