President Joe Biden will be briefed Friday on the shooting in Indianapolis, a White House official tells CNN.

White House chief of staff Ron Klain has already been in communication with Indianapolis’ mayor.

“The President will be briefed this morning on the shooting at a FedEx facility in Indianapolis. The White House Chief of Staff has been in touch with the Mayor of Indianapolis and the Homeland Security Advisor is in touch with law enforcement officials,” the official said.

At least eight people are dead after the shooting late Thursday night. A further five people have been taken to local hospitals for treatment.

A number of FedEx employees are at another location, waiting to be reunited with their family after the shooting incident at their Indianapolis facility on late Thursday night.

Officers and FedEx are working to reunite employees with their families but a policy where the company's employees do not carry cell phones while working has complicated the reunification effort, according to Craig McCartt, the deputy chief of criminal investigations for Indianapolis police.

Craig McCartt, deputy chief of investigations for Indianapolis police, told CNN that officers do not yet know if the shooter was a FedEx employee.

We do believe that the suspect had a rifle of some sort,” McCartt added.

He said officers were aware of reports the shooter had more than one gun, but could not yet confirm that detail.

According to the investigator, the suspect started shooting immediately after exiting his vehicle outside the facility.

The violence did not appear to have been prompted by a disturbance or altercation, McCartt added.

"It was very short," Craig McCartt said, adding that the suspect exited his vehicle and immediately began shooting while in the parking lot.

According to McCartt, the suspect entered the facility and continued shooting.

Police officers then arrived at the scene.

McCartt said he believed the suspect encountered police officers inside the facility and then took his own life.

Officers found eight deceased people both inside the building and in the parking lot.

McCartt said officers were still working to confirm the identity of both the victims and the shooter. Officers and FedEx are working to reunite employees with their families.

He said a policy where FedEx employees do not carry cell phones while working had complicated the reunification effort.

Police officers in Indianapolis are still working to determine the total number of people injured during the shooting, CNN's Jason Carroll said Friday.

“Some people were actually shot inside the facility, others were hit in the parking lot," Carroll said.

He said it was clear that some of the injured were "walking wounded" who took themselves to various hospitals in the area.

Due to the group going to different hospitals, officers are still working to determine how many people were shot.

The Indianapolis Metropolitan Police Department has said at least eight people with gunshot wounds died at the scene.

At least four people have been transported to the hospital from the scene with gunshot wounds.

One of the wounded is in a critical condition, Indianapolis Metropolitan Police Department (IMPD) spokesperson Genae Cook said at an early morning press briefing.

Three others were transported to the hospital with various injuries and two people were treated by medical personnel and released at the scene, Cook added.

At least eight people were killed in Thursday's mass shooting at the FedEx ground facility near Indianapolis International Airport.

Others have been travelling by themselves to hospitals in the nearby area.

Cook said the IMPD was leading the investigation into the shooting and was working with detectives from the Indiana State Police to interview witnesses at the scene and at the hospitals. The force anticipates that the FedEx building will be closed for a while as investigators gather evidence. 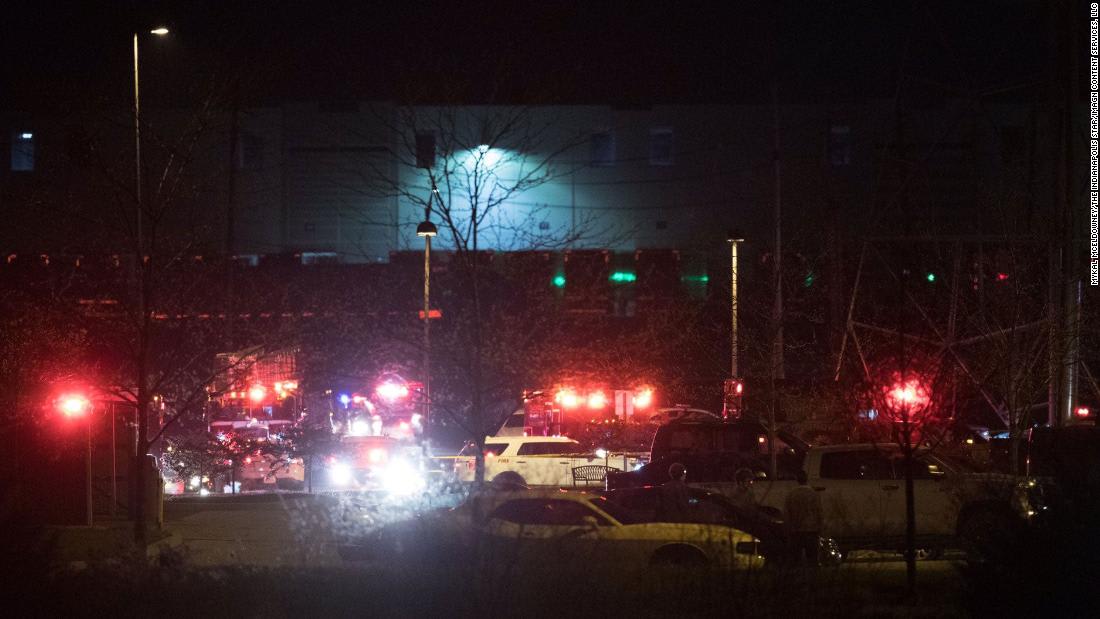 Two employees who say they were at the FedEx ground facility when they heard gunshots shared details of the incident with CNN affiliate WISH.

Jeremiah Miller told WISH he was taking a break between shifts when he heard two, then three shots.

He first thought the sounds were coming from a car.

Miller said he then heard between six and 10 shots which made him stand and look at the entrance door.

"I saw a man with a submachine gun of some sort, an automatic rifle, and he was firing in the open. I immediately ducked down and got scared and my friend’s mother, she came in and told us to get inside the car,” Miller told WISH.

Miller and his co-worker Timothy Boillat said they told colleagues about the shooting.

Miller said the pair told other employees "to not go to work today and to know there was an incident that just happened."

"I didn’t exactly see the person get shot but, after hearing the shootings, I did see a body on the floor behind a vehicle," Boillat said to WISH.
"Thank God for being here cause I thought I was gonna get shot," Miller added.

Police arrived at the scene of the shooting at around 11:00 p.m. local time to an active-shooter situation and entered the facility without hesitation, said Indianapolis Metropolitan Police Department spokeswoman Genae Cook.

"The officers responded, they came in, they went in and they did their job," Cook said. "A lot of them are trying to face this because this is a sight no one should ever have to see."

Police are asking anyone who was at the scene and may have left for safety or for medical treatment to contact the Indianapolis Metropolitan Police to provide information on the shooting.

Indiana Congressman Andre Carson, who represents the 7th District of Indiana, including Indianapolis, tweeted his condolences for the victims' loved ones in a statement early Friday morning.

"I am heartbroken by the mass shooting at the FedEx facility here in Indianapolis and praying for all affected by this tragedy," he wrote. "I am communicating with local authorities to get all details of the attack and my office stands ready to help everyone affected any way we can."