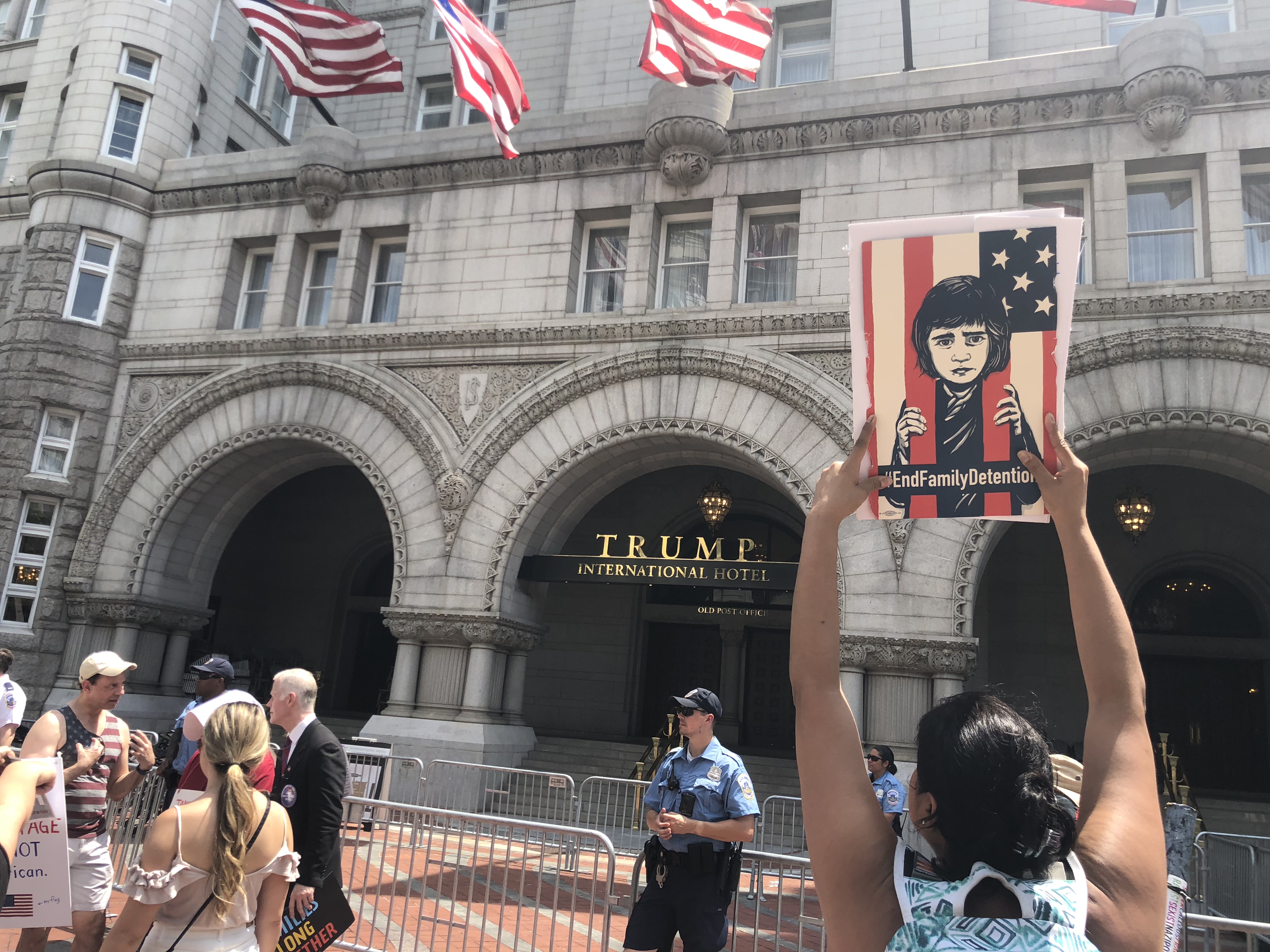 Protesters in Washington, DC, have been withstanding insanely hot temperatures to march from Lafayette Square to the White House.

As they marched down Pennsylvania Avenue and passed the Trump hotel, demonstrators shouted "shame, shame, shame" and "hey, hey, ho ho Donald trump has got to go." Other protesters booed the hotel, and some left protest signs on the barricades surrounding the building

They stopped at the Department of Justice, where shouted the same, but about Attorney General Jeff Sessions.

The crowds chanted "vote them out" as they marched back and forth. Demonstrators held signs that read "Resist" and "Not my president."

Watch the protesters on the move:

Vito Maggiolo, a public information officer for DC Fire and EMS, said the agency is treating a number of heat-related emergencies today at the protest.

There are firetrucks on scene, and one of the trucks is spraying mist for people to walk through to cool down.

We caught up with a protester marching in Chicago and asked him what his message was for President Trump.

He had a simple answer: "Leave office."

"You feel that passionately about it?" CNN asked.

He responded: "Very. He's the worst thing that's happened to this country."

Crowds of people are gathering in downtown Los Angeles right now to protest against the Trump administration's immigration policies.

California Sen. Kamala Harris, Los Angeles Mayor Eric Garcetti and several celebrities, as well as several families affected by the immigration policies, will be delivering remarks at the rally.

Rebecca Schaeffer, 38, is attending today's rally in Washington, D.C. with her husband, Sam Allen, a British permanent resident (aka a "green card" holder), and their two children, Ida, 6, and Juniper, 2.

Schaeffer knows it's the worsening of a policy that's been in place for some time, but said she is concerned that President Tump is testing his limits. "We need to resist every point. He's testing the limits of what he can do. We have to make it as difficult and slow as possible," she told CNN.

Her daughter, Ida, says she made her sign to protest that "children are being ripped from their parents."

"I want them to know what's happening," Schaeffer said. "It's going to be their generation's fight. I want to educate them and make them strong."

It's very hot in the nation's capital today — but that hasn't stopped protesters from marching on Washington, DC.

Temperatures are in the 90s in parts of city. CNN's Rene Marsh reports that firetrucks have been spraying out water, apparently to help keep the crowds cool.

"People are commenting on just how warm it is, but it's actually secondary because of everything they're hearing up on the stage," Marsh said. 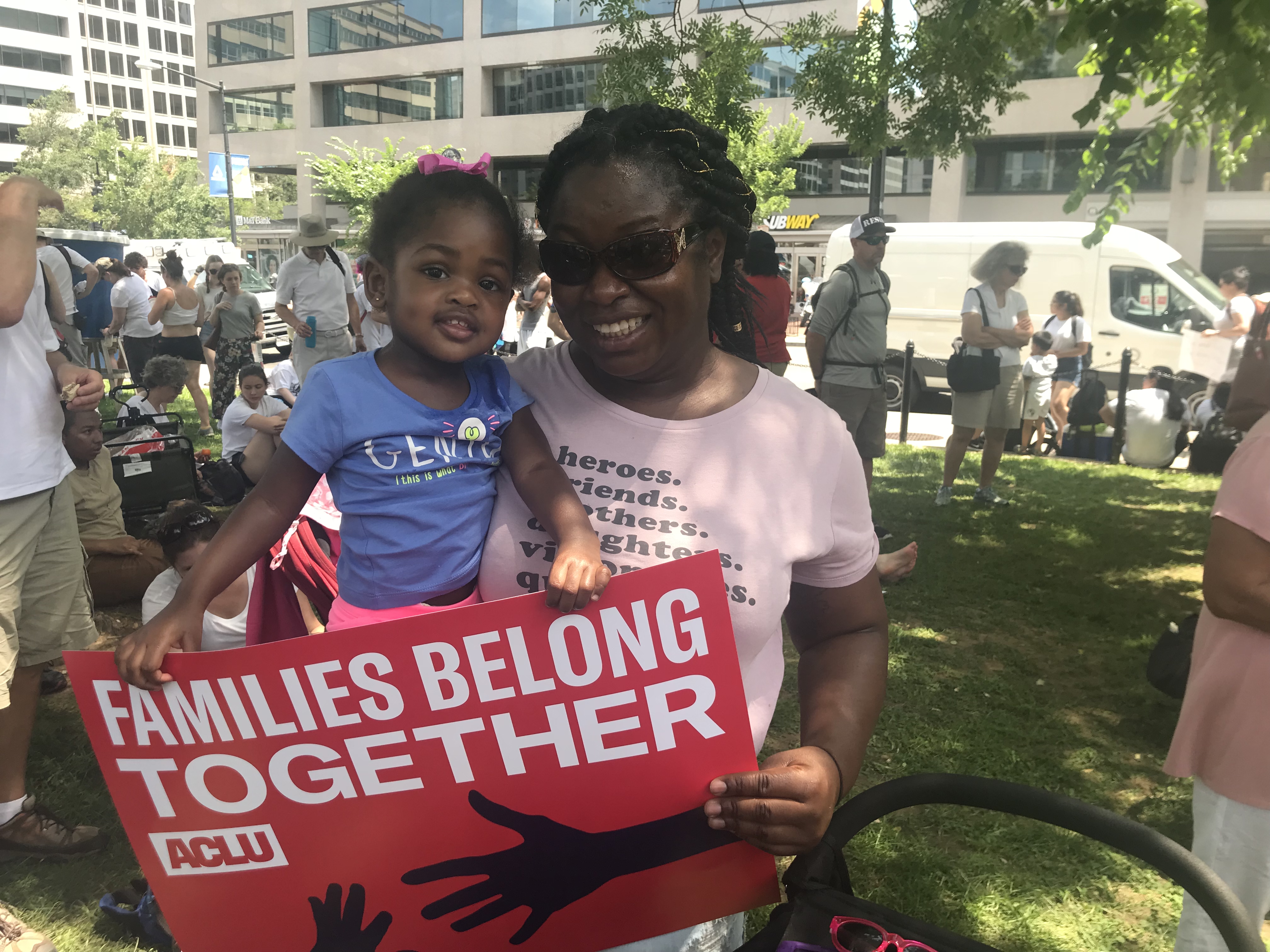 The 36-year-old teacher from Maryland says she sees her family in the faces of asylum seekers who are currently in the news.

“It’s heartbreaking,” she said. “That could have very easily been me and my mom.”

Lawrence says she was 6-years-old when she came to the United States from Liberia. Her family sought asylum and eventually, she said, they became US citizens.

“I’m an immigrant but I came on the other side. I came on a plane. I can’t imagine as a first-time mother having my daughter ripped from me,” she said. “I just sympathize with these families and I want to do my part to make sure they’re reunited.”

Asked what she thinks about the Trump administration’s plans to reunite families by holding them together in detention facilities, Lawrence says “that causes great concern for me.”

It’s an all-too-familiar idea, she says, that harkens back to the way Japanese Americans were treated decades ago.

“I guess it’s just what they know to do when they fear something or someone,” Lawrence said.

Families seeking asylum, she said, shouldn’t be treated like criminals. “I don’t think they’re coming over here to manipulate the system or steal jobs,” she said. “They need help.” 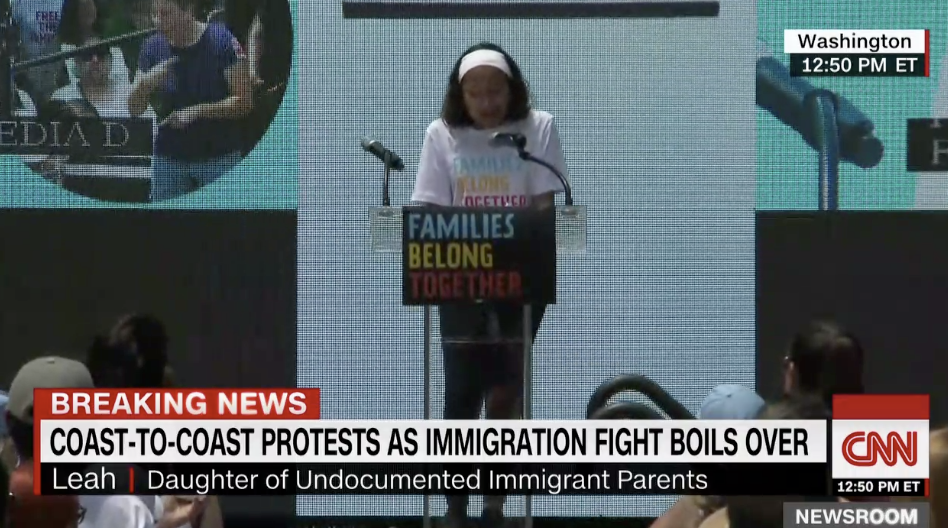 Leah, the 12-year-old daughter of undocumented immigrant parents, said she can't sleep or study because she lives with the fear that her mother will be deported.

"I live with the constant fear of losing my mom to deportation," she told the crowd at a rally in Washington. "My mom is strong, beautiful and brave. She is also a person who taught me how to speak up when I see things that aren't fair."

Leah said US Immigration Customs and Enforcement "wants to take away my mom from me."

"I don't like to live with this fear. It's scary. I can't sleep. I can't study. I am stressed," she said. "I am afraid that they will take my mom away while she is at work, out driving or at home."

"I don't understand why this administration won't support mothers who just want a better life for their children.

She called on the administration to end the practice of separating families at the border.

"Our government has to do the right thing and stop separating us from our parents and stop locking us up," Leah said. "I won't give up fighting for the right to stay with my mom. I am not asking for a favor. It is my right to stay as a child to live in peace with my mother and the rest of my family."

People close to the US southern border have been protesting Trump's immigration policies near detention facilities since the outrage for family separations began.

A group has gathered in McAllen, Texas — home to a processing center where many immigrant families were sent — today, too.

Elizabeth Rodriguez said she's been advocating for the migrant community for years, and she's thrilled to see the rest of the country protesting today, too.

"It is definitely a great sight to see so many coming together to give us support here in the Rio Grande Valley. This is something that we have long — for a long, long time been fighting for. This is a great county, great region, that has served our community, that has great history of people migrating back and forth. And to see all these people here supporting our cause, it's overwhelming. It's a great feeling to know that this issue is finally getting the attention that it deserves.