Murphy said the majority of the storm-related deaths were people who were caught in their vehicles by flooding and were “overtaken by the water.”

“Our thoughts and deepest prayers are with their family members,” Murphy said.

A state trooper died after being swept away by floodwaters in Woodbury, Connecticut, has died, said Col. Stavros Mellekas of the Connecticut State Police.

The trooper who has not been identified responded to reports of a missing person due to the flooding in Woodbury, Connecticut, at 4 a.m. ET. He was carried away by the rising waters when he arrived on the scene.

After a search and rescue, he was taken to Yale New Haven Hospital via helicopter and died en route. He was pronounced dead at the hospital.

He was a member of the Connecticut State Police for more than 26 years, according to Mellekas.

“He was one of the senior sergeants on the state police: Well respected and it’s just a tragedy," Mellekas said.

Alabama Gov. Kay Ivey has authorized the Alabama National Guard to deploy approximately 150 military police to Louisiana to aid the state following the damage left behind by Hurricane Ida, according to a release from the governor’s office Thursday.

“The good men and women of the Alabama National Guard always stand ready to assist their fellow Alabamians and our country, when needed. Hurricane Ida took a significant toll on our neighbors to the west, particularly in Louisiana, which is where our folks are being requested to help. Alabama continues to offer any relief we can provide,” Ivey said.

This comes after Ivey issued a supplemental state of emergency this morning to assist evacuees currently in Alabama.

Officials with the major regional electric utility in Louisiana on Thursday said its hopes to have all damage assessments complete today, at which point they will be able to begin providing restoration estimates for areas of the state that have been without power since Hurricane Ida slammed into the region on Sunday.

Entergy completed its first restoration estimate today, and Entergy Louisiana president and CEO Phillip May said the company expects to restore power to “the majority” of customers in greater Baton Rouge area who can take power by Sept. 8.

By the numbers: Entergy says they’ve restored power to approximately 137,000 customers statewide in Louisiana, according to a company press release.

The website PowerOutage.US reported that there are still 928,895 outages across the state of Louisiana.

Sources of power have been brought back to St. Charles Parish and parts of Jefferson Parish for the first time, May said in a Thursday briefing posted on the company’s official website.

In New Orleans, power has been restored to parts of uptown, midtown, the Central Business District and additional neighborhoods in New Orleans East and the Carrollton area, as well as the Superdome, Entergy New Orleans president and CEO Deanna Rodriguez said at Thursday’s briefing.

Those additional neighborhoods in New Orleans were brought back online after Entergy crews restored the second of eight transmission lines into the city, Rodriguez said.

“We are in close coordination with the city to identify critical locations in need of backup generation to power up first responders and community shelters,” Rodriguez said. 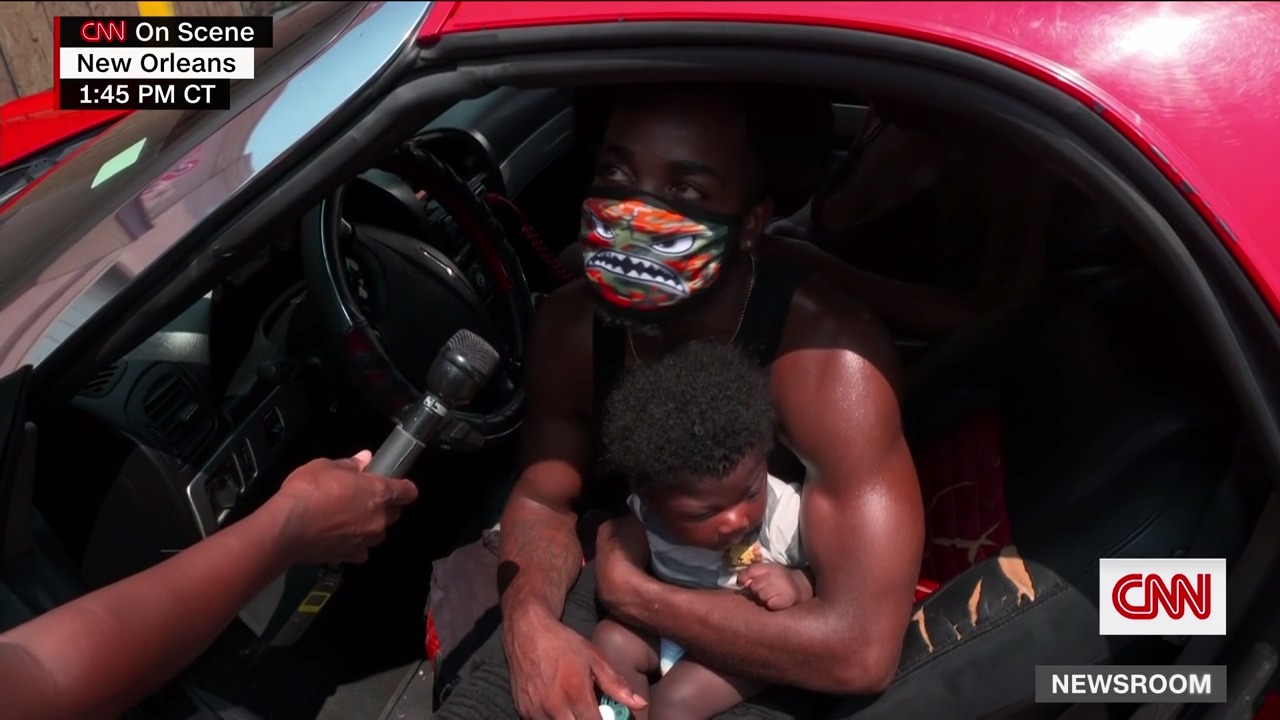 A New Orleans father described the difficult situation he and his family are facing following the damage caused by Hurricane Ida.

The father and his family are trying their best with the supplies they have and using their car for relief from the heat.

"It has been kind of hard and you know, with a three-month-old baby and no water, no lights, nothing, it ain't easy. We wake up every morning, all morning, crying all day... So it be a little difficult," the father told CNN's Adrienne Broaddus, while holding his baby inside his car at a gas station.

Asked about what his family is doing to make sure they have enough supplies, like food, water and milk, the father said that they had bought supplies ahead of the storm, but "everything is running out now."

"So, 9 out of 10, we're going to have to either find somewhere else to go or leave from New Orleans because we can't live like this," he said.

More than 977,000 homes and businesses in Louisiana were without power Wednesday, according to PowerOutage.US. By Wednesday morning, power had been restored in small portions of eastern and central New Orleans, a map from energy provider Entergy New Orleans showed.

Passengers who were stranded on subway stations due to Wednesday night's flooding in New York City continue to share images and videos of their commutes.

He said he was stuck underground for more than an hour after his train stopped between the 59th Street and Lexington stops.

The Energy Department announced Thursday it will release 1.5 million barrels of crude oil from the nation’s emergency stockpile of oil.

The decision to tap the Strategic Petroleum Reserve, or SPR, comes as two-thirds of the gas stations in New Orleans and Baton Rouge are out of gasoline in the aftermath of Hurricane Ida.

This will “alleviate any logistical issues of moving crude oil within areas affected by Hurricane Ida to ensure the region has access to fuel as quickly as possible,” the Energy Department said in a statement.

Some context: The SPR, a complex of deep underground storage caverns in the Gulf Coast holding more than 600 million barrels of crude, is reserved for emergency situations – and the aftermath of Hurricane Ida appears to be one of those.

The Energy Department said it has agreed to conduct an exchange with ExxonMobil’s Baton Rouge facility. In an exchange, an oil refiner borrows SPR crude for a short period of time due to “exigent circumstances” and later replaces it in full, along with a premium, according to the agency’s website.

The Energy Department said it is encouraging refiners to prioritize gasoline to the affected region and remains committed to supporting those efforts through options including the SPR.

“The President will travel to New Orleans to survey storm damage from the hurricane. He’ll meet with state and local leaders, I would expect that will include the governor and the mayor, from impacted communities. And beyond that, we’re still finalizing all the details which we’ll, hopefully, have more later tonight on,” Psaki said during the press briefing.

She cautioned that details are “still being finalized.”

Earlier in the briefing: Psaki detailed federal efforts underway to support individuals impacted by the storm.

She also said FEMA is working to “reduce barriers that have long prevented many disaster survivors, particularly Black Americans from receiving disaster assistance by expanding the type of legal documentation for homeowners and renters to prove ownership or occupancy.”

In addition, she said, “mobile emergency response support assets are deployed” and “as of today, roughly 50,000 households in Louisiana have already received a one-time payment from FEMA to support critical needs.”

Maryland, New Jersey, New York, and Pennsylvania are reporting deaths from the storm, and search and rescue and clean up efforts are underway today. Meanwhile, parts of Louisiana — where Ida made landfall as a Category 4 hurricane earlier this week — could be without power for weeks because of the storm.

In pictures: You can see more of how Ida's remnants wreaked havoc in the Northeast here.