Our live coverage of Tropical Storm Sally has ended for the day.

Sally has weakened to a tropical storm with winds of 70 mph, according to the National Hurricane Center's latest advisory.

The storm had landfall as a Category 2 hurricane early this morning in Alabama.

While the Sally is no longer a hurricane, there is still "catastrophic and life-threatening flooding" occurring in parts of Alabama and the Florida Panhandle, the center said.

The city of Pensacola, Florida, shared images on Facebook showing the extensive flooding from Hurricane Sally in the downtown area of the city.

"Flooding this morning in downtown Pensacola. With daylight, we are beginning to see the impacts of #HurricaneSally," the post said.

The city warned residents to "please stay inside and off the roadways for your safety."

See the scene on the ground:

It has been several hours since Sally made landfall. Still, the seas remain "dangerously high" tweeted the National Hurricane Center's Tropical Analysis and Forecast Branch.

Buoy 42012, which is just off Alabama's coast, was in the storm's eyewall — the most dangerous part of the hurricane.

The buoy recorded wind gusts of 110 mph and a wave height of 27 feet as the storm passed by.

The office on Twitter urged residents to stay home as dangerous conditions continue.

Earlier today, the agency said about 95% of residents were without power because of Sally. At that time, the county said it is still too dangerous for crews to begin rolling out to start restoration.

As of noon ET, more than 500,000 customers are without power due to Hurricane Sally.

There are currently 504,808 customers without power in Florida and Alabama, according to PowerOutage.US.

Alabama is experiencing the most significant outages from Hurricane Sally, with at least 278,889 outages. There are at least 225,909 outages in Florida.

Hurricane Sally made landfall in Gulf Shores, Alabama, early Wednesday morning. More than 500,000 customers lost power at the height of the storm.

Hurricane Sally brought extremely high winds to portions of the Gulf Coast upon landfall this morning.

Here are some of the strong reported wind gusts in association with Sally's landfall this morning:

*Depicts locations where the reporting station is elevated.

These winds have and will continue to cause damage across the Gulf Coast as the system continues to push inland. Sally has weakened some and now has sustained 80 mph winds but is still producing winds strong enough to knock down trees, power lines, and any loose debris.

Escambia County Sheriff David Morgan says a section of the Three Mile Bridge that connects Gulf Breeze, Florida, to Pensacola is missing due to Hurricane Sally.

Morgan didn't say how extensive the damage to the bridge was, only indicating that an assessment was done on the bridge this morning.

The city of Gulf Breeze tweeted that the Three Mile Bridge was closed along with a photo of what appears to be a crane on top of it.

CNN is on the ground in Pensacola Beach:

Hours after Hurricane Sally made landfall, Escambia County, Florida Sheriff David Morgan says the devastation from the storm is "bad."

During a news conference on Wednesday morning, Morgan said there was extensive flooding in Escambia County from Sally.

"It's going to take a considerable amount of time to clean this up," Morgan said.

Morgan compared Sally's devastation from the water to that of Hurricane Ivan in 2004.

The sheriff anticipates thousands of residents will need to be evacuated due to flooding and covered roadways.

"It's going to be a long time folks for us to come out of this thing," Morgan said. The sheriff is urging residents to stay indoors and to call 911 if they are in a life-threatening situation and need to be evacuated from the home.

Morgan says there are no reports of injuries or fatalities at this time.

Sally's surge is the third-highest ever recorded in Pensacola, according to preliminary automatic readings. 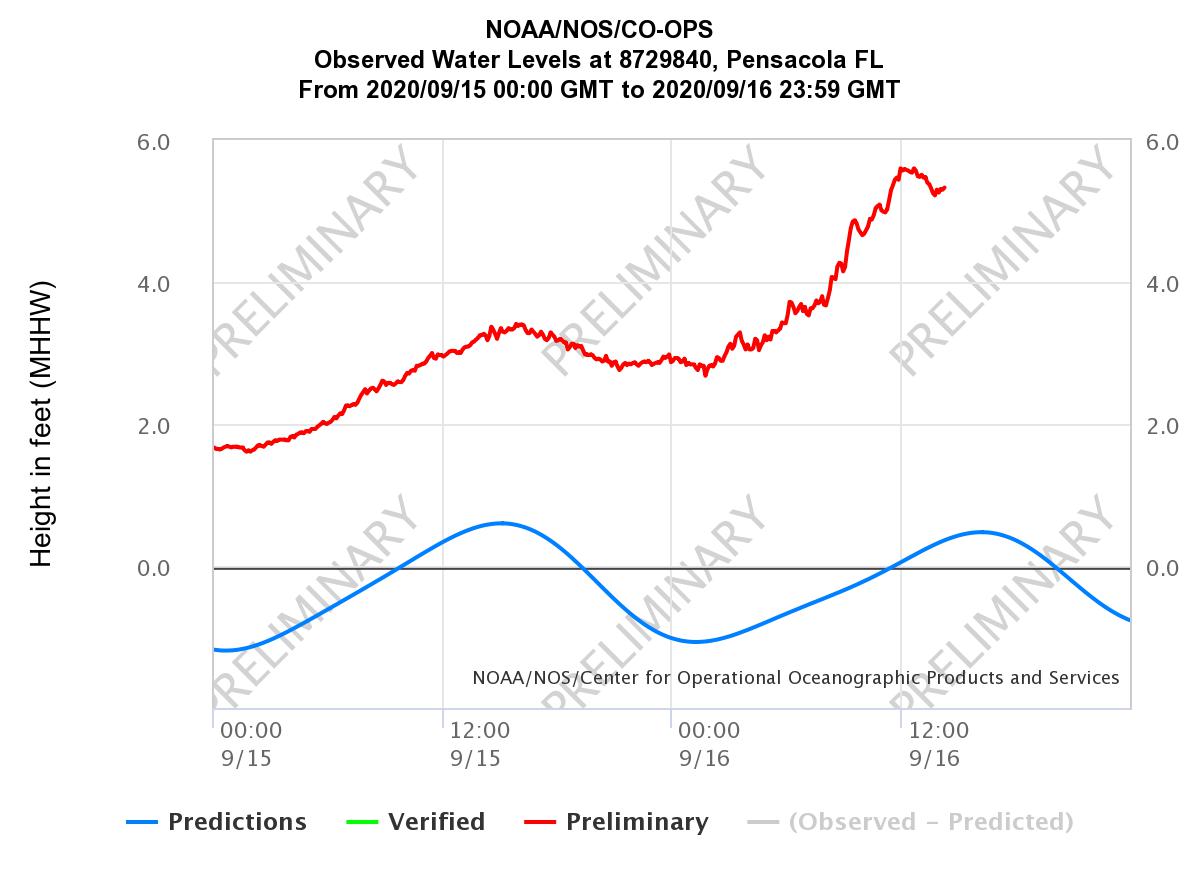 It has reached 5.6 feet of storm surge.