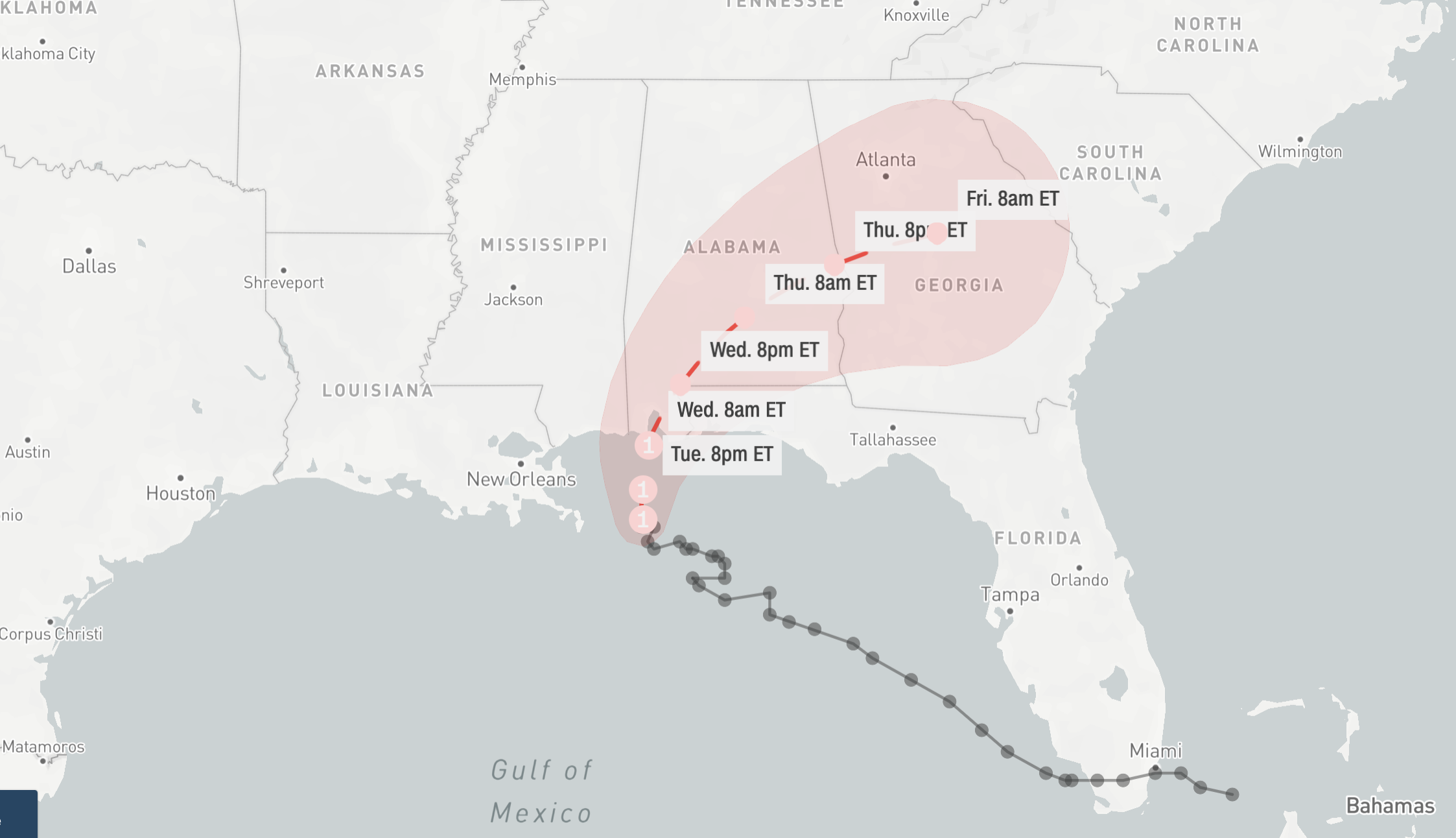 Hurricane Sally has been inching toward the US Gulf Coast today, drenching parts of Alabama, Mississippi and the Florida Panhandle in rain. But the storm has yet to make official landfall.

Sally may not move over land until early Wednesday.

Later tomorrow, Sally is expected to travel northeastward through Alabama. It could then travel through Georgia on Thursday.

Hurricane Sally is continuing to batter the US Gulf shore, and conditions are expected to worsen through the day and night as the storm creeps towards land.

If Sally makes landfall in Alabama, it will be the first hurricane to make landfall in the state since Hurricane Ivan in 2004.

Sally hasn't made landfall, and the heaviest rain hasn't even made it onshore.

Yet, widespread amounts of four to more than six inches of rain have already fallen from Sally over the past 48 hours, according to radar data.

In the image below, you can see just how much has fallen. 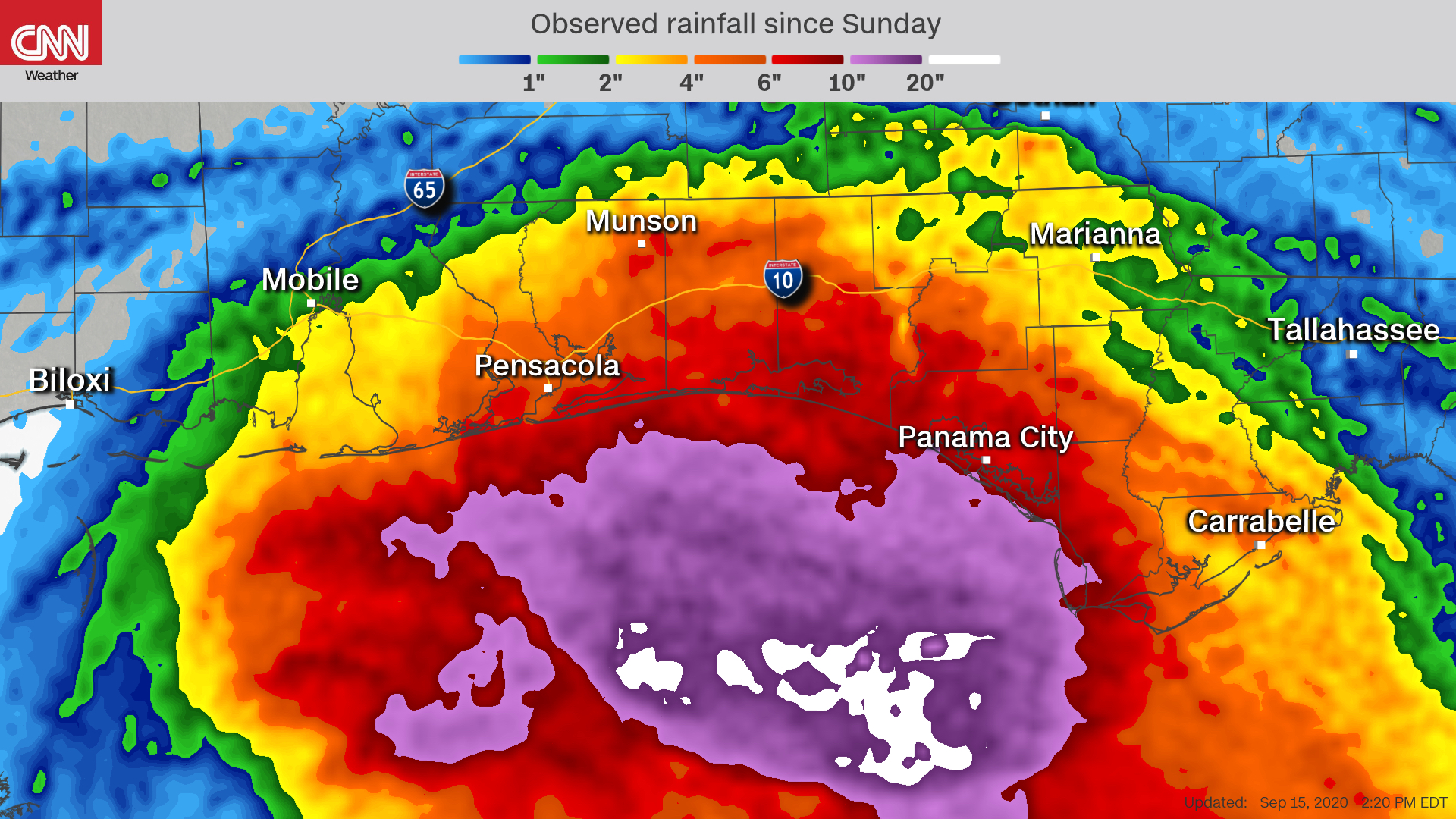 Sally is currently moving at 2 mph, slower than an average human walking pace of 3 to 4 mph.

As Sally crawls toward shore, tropical storm-force winds — winds 39 mph or higher — could be experienced for more than 30 hours in the areas where the storm will be making landfall.

Winds have already begun from the Mississippi/Alabama border east into extreme Western Florida. They're expected to last until Wednesday night.

Hurricane Sally is crawling toward the US Gulf Coast, and it is now 60 miles east of the mouth of the Mississippi River, according to the National Hurricane Center's 2 p.m. ET forecast advisory.

"Historic life-threatening flooding likely along portions of the northern Gulf Coast," the center wrote in its latest update.

Here's a look at the projected path of Hurricane Sally as it inches toward the coast: 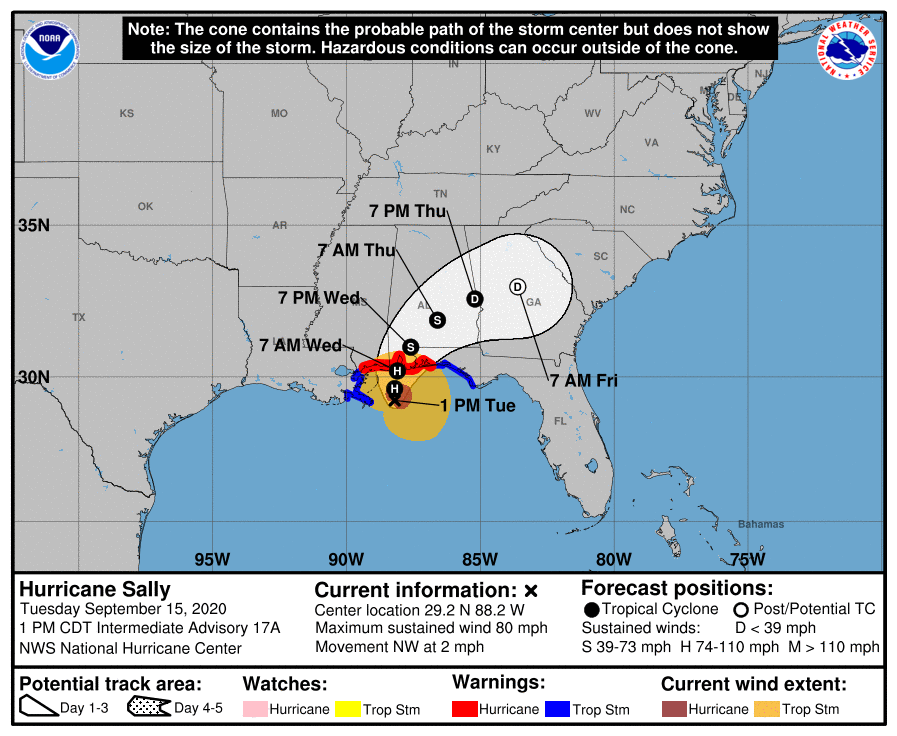 Hurricane Sally continues to inch toward the US Gulf Coast, drenching parts of Alabama, Mississippi and the Florida panhandle.

Waves crashed in Mobile Bay as Sally churned off the coast today. Troy Anderson, 51, from was watching from his white Chevrolet Truck.

“I don’t think I’ve seen waves this big before," Anderson told CNN. However, he added that he's "not worried" and doesn't plan to evacuate.

Hurricanes are commonly thought of as strong, powerful winds. But it's actually the water that causes most of the destruction, accounting for nearly 90% of fatalities.

About half of those are due to storm surge: Storm surge is the rise in sea level during a big storm. It is measured as the height of the water above what the normal predicted astronomical tide height would be.

Since New Orleans and Lake Pontchartrain are currently west of Sally's estimated landfall, storm surge here will be lower than other areas east such as, Dauphin Island and Gulf Shores, Alabama, which can expect a 4 to 7 feet surge, or Pensacola and Destin, Florida, which could see a 3 to 5 feet surge.

The remainder are mostly due to fresh water flooding: Rain causes about 27% of deaths associated with tropical cyclones, says NOAA

Inland flooding is a danger that can occur far from where the eye of the hurricane and heavy winds make landfall.

"An average September sees around 4-5 inches of rainfall along the Gulf Coast in MS/AL/Florida panhandle — Sally will drop this amount in a couple of hours and likely produce several months' worth across some areas before the storm leaves the region," explains CNN meteorologist Brandon Miller.

Models have shifted to the east in the past 24 hours, and that means the heaviest rain has also shifted farther east, putting a place like Dauphin Island, Alabama, with a forecast of up to 20 inches of rain (isolated amounts up to 2 feet).

Sally is the seventh hurricane of the season, an average season only sees six – and we just now reaching the peak of the season, with two and a half months to go.

Sally will be the fourth hurricane to strike the US. That's the first time that has happened since the infamous year of 2005 (Katrina and Rita year). The other three this year were Hanna, Isaias and Laura.

In addition, an eighth hurricane could be forming in the Atlantic soon.

Hurricane Sally, which is already impacting the Gulf Coast, will continue to batter the shore with worsening conditions through the day and night as the storm creeps towards land.

The storm is is currently moving at 2 mph — slower than an average human walking pace of 3-4 mph.

An average September sees four to five inches of rainfall along the Mississippi-Alabama-Florida panhandle. In parts of the area, Sally will drop this in a couple of hours.

Before the storm exits the region, three to four months’ worth of rain could accumulate in some spots.