CNN's continuing coverage of Hurricane Nicole can be found here. 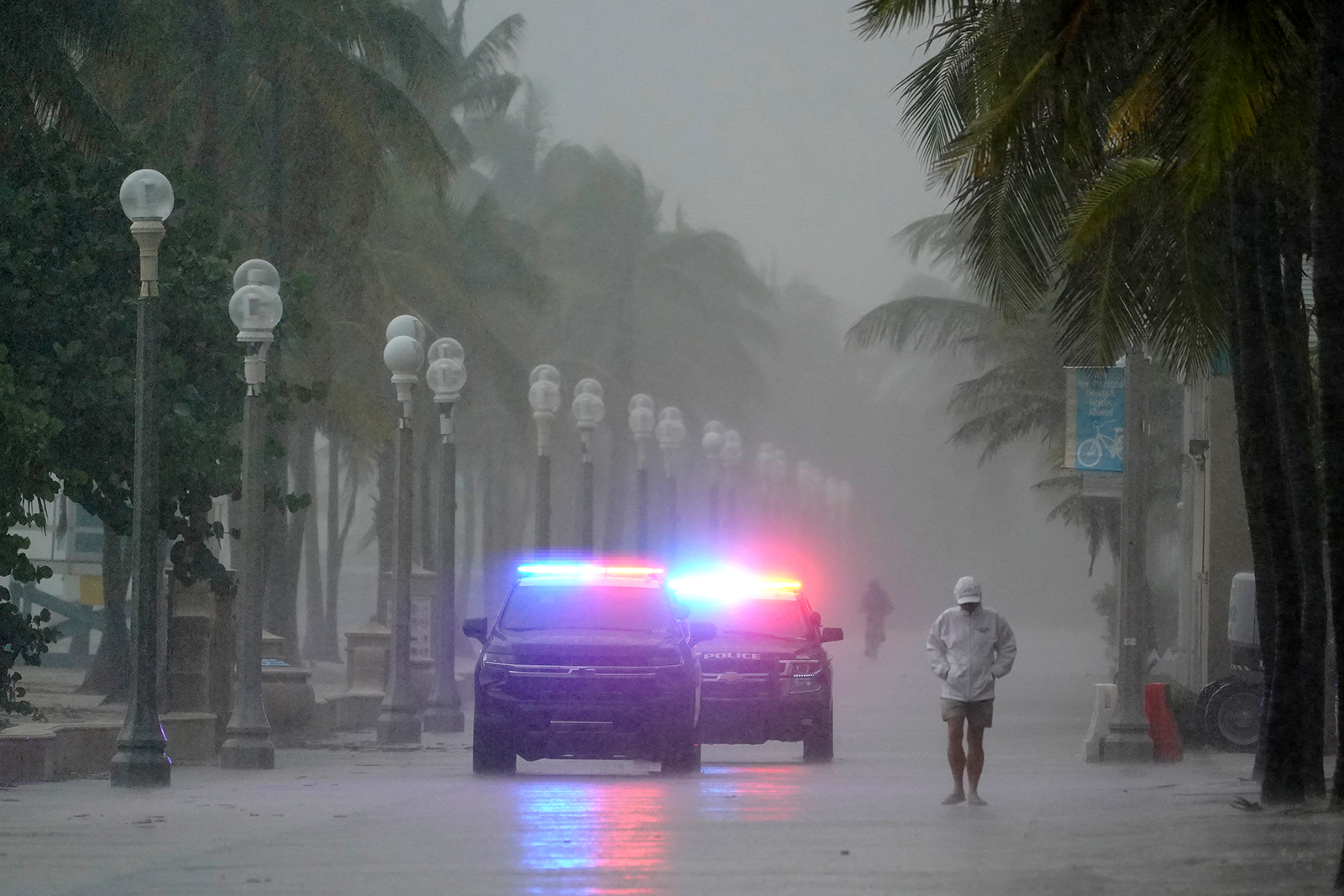 Authorities are urging individuals to have multiple ways to receive weather warnings as they go to bed as the threat of tornadoes increases overnight.

Intense rain-bands will move across the east coast of Florida overnight as Hurricane Nicole moves onshore. Embedded within these bands of rain may be quick forming tornadoes, often lasting only a few minutes but strong enough to create damage and threaten lives.

By Thursday morning, the threat extends inland towards the I-301 corridor as the system slides across the Florida Peninsula.

Tropical induced tornadoes are common with landfalling hurricanes as the rain-bands interact with the immediate coastline. The right, front quadrant of the tropical system is where the most likely tornado activity occurs.

Radar imagery shows Nicole’s eye moving away from Grand Bahama Island and towards the state, the National Hurricane Center tweeted around 11 p.m. EST.

The powerful storm -- packing maximum sustained winds of 75 mph -- is churning closer at 13 mph and is about 50 miles northeast of Palm Beach, Florida, according to the Hurricane Center.

On its current forecast track, Nicole's center is expected to move onshore to Florida's east coast late Wednesday or early Thursday, according to the hurricane center.

Nicole is expected bring flash and urban flooding as well as large and damaging waves.

“Do not focus on the exact track of Nicole since it is a large storm with hazards extending well to the north of the center, outside the forecast cone,” the Hurricane Center warned. “These hazards will affect much of the Florida peninsula and portions of the southeast US.”

“The barrier island continues to flood due to the storm surge from the south end to the north end of the city. Traffic operations are impacted and many roadways are impassable," Fort Lauderdale Police said Wednesday evening on Twitter.

The National Hurricane center has issued several storm surge watches and warnings as Nicole churned toward the state, pushing rising sea water inland from the coastline.

"Attempting to drive during the storm is dangerous and should be avoided,” Fort Lauderdale Police said.

A high tide is expected around 9 p.m. ET, and flooding is already occurring across the area, city of Fort Lauderdale officials said.

After wreaking havoc in northwestern Bahamas Wednesday, Hurricane Nicole is poised to move onshore the east coast of Florida late Wednesday or early Thursday, according to a 10 p.m. update from the National Hurricane Center.

"Nicole's center is then expected to move across central and northern Florida into southern Georgia Thursday and Thursday night, and into the Carolinas Friday," the hurricane center said.

NHC notes that Nicole will bring “strong winds, dangerous storm surge and heavy rains and that large intense bands extend quite far from the center." Also, they stress that “Nicole is a large storm whose hazards extend well north of the center, outside the forecast cone.”

Nicole is expected to make landfall in Florida around 1 a.m. ET. The storm is expected to weaken as it moves across Florida into the southeastern US, and is "likely to become a post-tropical cyclone by Friday afternoon," the center said.

Wind and storm surge from the storm has already led officials to deem buildings unsafe or at the risk of collapse. Universities and amusement parks have also closed operations in preparation for Nicole's landfall. Airlines canceled thousands of flights to prepare as well.

Gov. Ron DeSantis expanded his state of emergency -- originally for 34 counties -- to include 11 additional counties to prepare for Nicole.

As Hurricane Nicole approaches, upcoming high tides and coastal erosion are a big concern in Volusia County at this hour, according to Kevin Captain, Volusia spokesperson.

Volusia County officials deemed 22 single homes unsafe in the unincorporated area Wilbur-by-the-Sea. All of the homes were evacuated.

"Those buildings that were deemed unsafe are directly correlated to some of the coastal erosion that we've experienced," he said, acknowledging that Hurricane Ian left the coast vulnerable when it struck six weeks ago.

"It [Hurricane Ian] hammered our coast. It took away our buffer, meaning all of that sand that we had as a protective layer, we lost," he said. "So when you remove that buffer and now you (add) another storm on top of that, it's a problem and recipe for disaster."

Captain said about 60 individuals were in county shelters.

He urged people to stay off the beach, referencing a tourist who died during Hurricane Ian when she went outside, fell and drowned on the beach.

Authorities in New Smyrna Beach are asking residents this evening to evacuate condo buildings that have been deemed unsafe due to the erosion of a sea wall.

“The Las Brisas condo buildings (3001 Hill Street) that are facing the beach are now deemed unsafe by the NSB building department due to the erosion of the sea wall. Residents are urged to evacuate. NSBPD is currently on scene offering assistance,” a post from the New Smyrna Police on Facebook said.

CNN has reached out to New Smyrna Beach officials to get more details.

“The City of New Smyrna Beach’s chief building official has deemed the two easterly oceanfront buildings of Las Brisas condominiums, 3001 Hill St., unsafe due to the dune washing up to within 10 feet of the structure,” the city said in a news release Wednesday evening.

The city went on to say “New Smyrna Beach Police Department officers arrived on scene at 5:45 p.m. to notify residents and assist them in evacuating the premises, which most safely did.”

The city has also issued a curfew which is in effect until 7 a.m. ET. City officials are closing the North and South Causeway bridges at 8 p.m. ET.

New Smyrna Beach is located in Volusia County and is about 11 miles south of Daytona Beach Shores.

Other buildings in Florida are at risk of collapsing as Hurricane Nicole nears, officials say.

In Daytona Beach Shores, authorities said at least six buildings were deemed at risk of structural collapse Wednesday. Five others were previously evacuated due to risk of collapse, according to Michael Fowler, Daytona Beach Shores Public Safety Department director.

Nicole remains a Category 1 hurricane with sustained winds of 75 mph, according to the latest update from the National Hurricane Center. The hurricane continues to bring dangerous storm surge and strong winds to Grand Bahama Island, the hurricane center said.

A storm surge of 4 to 6 feet is expected along the immediate coast of the northwestern Bahamas as Nicole continues to track over the islands.

Nicole continues to track west at 13 mph and is 20 miles east-northeast of Freeport, Bahamas, and 100 miles west of Palm Beach, Florida.

“Little change in strength is expected this evening, and Nicole is forecast to remain a hurricane until it reaches the east coast of Florida tonight or early Thursday,” the hurricane center said.

As Hurricane Nicole makes its way toward Florida as a Category 1 hurricane, colleges and universities across the state are closing and canceling classes.

The University of South Florida will move all classes remotely on Thursday, and the campus will remain closed.