Hurricane Laura makes landfall in the US

The American Red Cross has deployed more than 600 disaster workers and sheltered more than 5,000 people last night, the group said in a release.

“Over the past few days our volunteers have been working tirelessly to position supplies and shelter teams across the state,” American Red Cross Louisiana Regional Executive Joshua Joachim said in a release. “As the storms shift, we shift with them and remain prepared to meet the immediate needs of those impacted across Louisiana.”

The Red Cross told CNN yesterday that more than 700 workers were ready to respond. A spokesperson for the group says that the reason for the change was due to the new storm track, and that the number of workers in Louisiana and Texas remained the same.

Starting the day, Laura was a Category 1 hurricane. It has now exploded into an extremely dangerous Category 4 storm.

The storm had winds of 90 mph late Tuesday night, according to the 11 p.m. ET update. Laura did hit category 2 until the 2 a.m. ET update this morning.

Now, it is packing sustained winds of 140 mph with higher gusts.

Hurricane Laura, now a dangerous Category 4 storm, is heading toward the US Gulf Coast.

Right now, the storm is forecast to keep its Category 4 strength when it makes landfall after midnight tonight, near the Texas and Louisiana border.

Laura is forecast to travel northward, along the Texas-Louisiana border before turning slightly and traveling northeastward through Arkansas.

Here's a look at the hurricane's projected path: 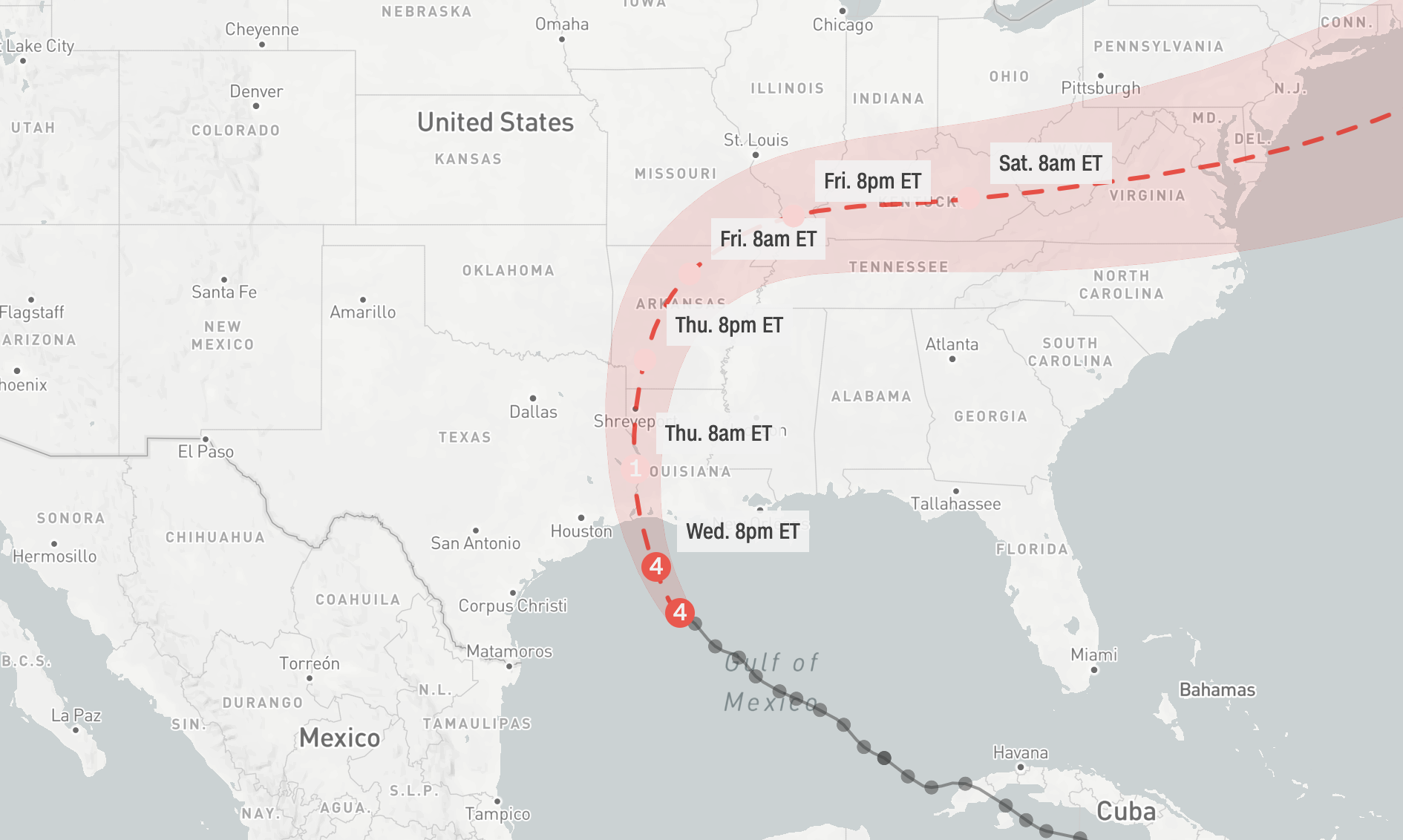 Hurricane Laura just strengthened into a Category 4 as it churns in the Gulf of Mexico.

Storms reaching Category 3 and higher are considered substantial hurricanes "because of their potential for significant loss of life and damage," the National Hurricane Center writes.

Hurricane Laura has strengthened into an "extremely dangerous" Category 4 hurricane, according to the National Hurricane Center. It now has maximum sustained winds of up to 140 mph.

"Little time remains to protect life and property," the center warned in its latest advisory.

The full Louisiana National Guard has been activated ahead of Hurricane Laura's landfall, Gov. John Bel Edwards announced at a press conference today. He said the last time the state had activated the full guard was for Hurricane Issac in 2012.

“We need everyone in southwest Louisiana paying close attention to this storm,“ Gov. Edwards said.  “People need to heed the warnings they have been given and evacuate” he added. He called the expected storm surge un-survivable in some Parishes in the path of the storm.

“We do believe that there will be extensive search and rescue after this storm," Edwards said, thus part of the reason for activation of the full guard.

The governor said that more than 3,000 members of the guard are currently deployed, with that number to increase this afternoon. In addition to the personnel, 19 aircraft, 920,000 liters of water and more than half a million meals have been pre-deployed, Edwards added.

About 2,000 hotel rooms had been secured this evening to help shelter people as a result of the storm and to also help with social distancing, Edwards said.

All commercial traffic along I-10 is being detoured north from I-10 to I-20, Shawn Wilson commissioner of the Louisiana Department of Transportation said at a press conference.

“The storm surge is also a big problem — with 10 to 15 feet storm surge around the Jefferson County area, we should expect some flash floods in various regions where the storm will be going through, and those flash floods could spill into rivers and the rivers could overflow," Abbott said during a Wednesday afternoon presser.

Abbott warned that “the one river that we do anticipate having the greatest challenge is the Sabine River,” which is along the Texas and Louisiana border.

Abbott said there will be a roughly 24-hour period where “there will be no ability for rescuers or operators to get in and assist you in any way.”

On Wednesday, Abbott added Camp, Ellis and Tarrant counties to the disaster declaration which was already in place from earlier this week. Ellis and Tarrant are housing many evacuees from the coastal areas he said.

A mandatory evacuation order for several areas and a curfew order are now in place in Vermilion Parish in Louisiana.

The following areas are under a mandatory evacuation order, according to posts on the Vermilion Parish Office of Homeland Security and Emergency Preparedness Facebook page:

A curfew will be parish-wide starting at 8 p.m. until 5 a.m. local time.

The parish anticipates a storm surge from Hurricane Laura from 12 to 18 feet, officials said on Facebook.

When Laura makes landfall, the storm will bring with it an "unsurvivable storm surge," the National Hurricane Center said Wednesday.

Here are some important things to know about here: