Our live coverage has ended, but you can read more about the storm below. 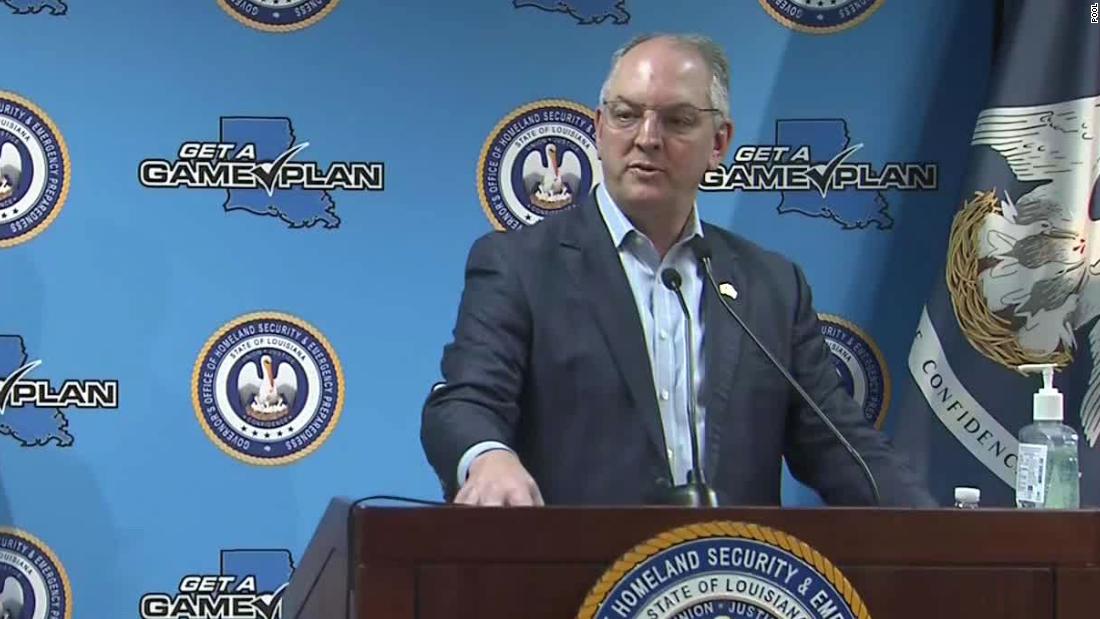 Louisiana’s governor said that damage in his state was extensive, and warned that a full assessment was not truly known yet. He also warned citizens that they need to careful during the recovery due to Covid-19.

“I will tell you that the damage is extensive” Gov. John Bel Edwards told CNN’s John Berman on New Day.

Edwards said that the state has not been able to send helicopters yet due to the high wind speeds, but that more than 1,500 search and rescue personal and 400 boats and high-water vehicles are on the way to the worst hit areas.

At this point, the governor said that no deaths had been reported as a result of the storm.

“We have an immediate need that we need to take care of but we don’t want to do it in a reckless way that causes more cases of Covid to impact our state,” the governor said.

Paul Heard rode out Hurricane Laura in his car in Lake Charles, Louisiana. When he got into his car, it was about 25 feet from his house and he described how powerful winds moved his car overnight.

"Trees are twisted from high winds or tornadoes. There’s a lot of damage. People are going to need a lot of help down here,” he said, describing how his own house had been compromised.

Speaking on CNN’s New Day, Edwards continued saying, “I don’t know how long that will hold up, but that’s a blessing.”

"The early reports are that there were no deaths," Abbot said while speaking to CNN’s Alisyn Camerota. “One reason for that is because people did heed the warnings to evacuate.”

But Abbott warned the storm isn’t over yet.

“If you go further up in Texas, in North East Texas, the hurricane is still going through,” Abbott said. “So there's powerful winds knocking down very tall trees, in east Texas as well as potential tornado activity. So people in northeast Texas, still need to remain very vigilant right now.”

“Right now we have search and rescue teams that are already going throughout the entire area to see if there is anybody who does need some type of assistance with the level of water that you're talking about, especially in the Beaumont, Port Arthur, and Orange areas that were the closest to the Louisiana border that could have faced the hardest brunt of the storm."

Emergency crews are on the ground right now, “making assessment about what the flooding damage is.”

More power outages have been reported in Texas and Louisiana this morning, with more than 500,000 customers affected in the states.

Louisiana is experiencing the most significant outages from Hurricane Laura, with almost 400,000 customers without power, according to to PowerOutage.US.

Meanwhile, more than 100,000 customers are affected in Texas.

"Damaging winds and flooding rainfall spreading inland over western and central Louisiana," the advisory said. "Life-threatening storm surge continues along much of the Louisiana coastline."

Here's a look at the latest predicted path: 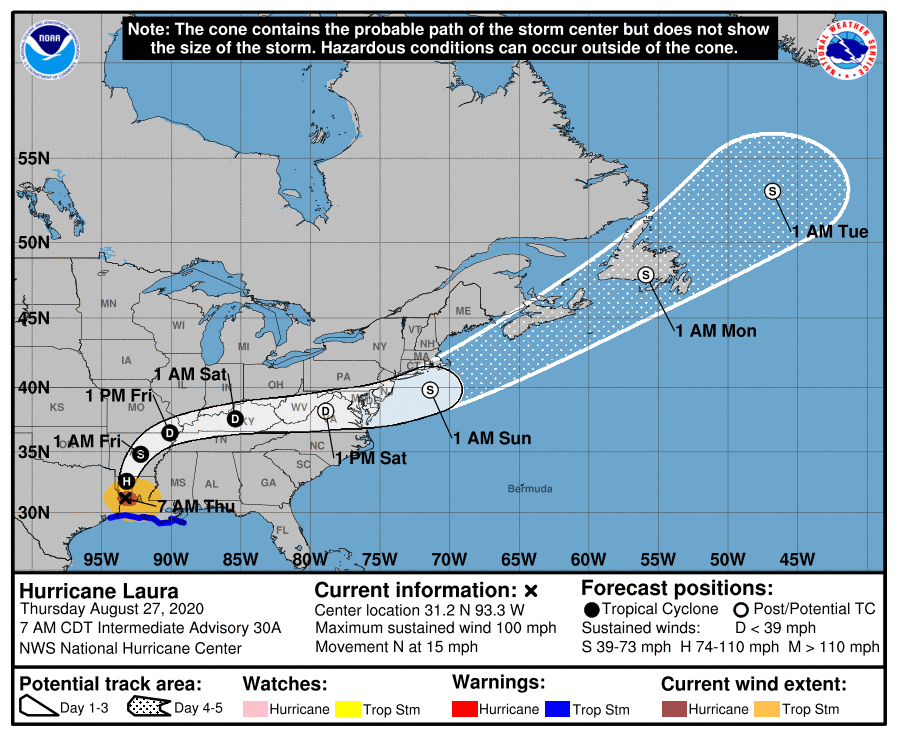 Hurricane Laura blew chucks off of the Golden Nugget Casino's roof as it tore through the city of Lake Charles, Louisiana.

Ted Oberg, a reporter for CNN affiliate KTRK was in Lake Charles as hurricane Laura hit the area. As the winds picked up overnight, part of the roof of the Golden Nugget Casino began flying off.

Laura weakened to a Category 2 storm, with winds of 110 mph. Earlier this morning, it made landfall near Cameron, Louisiana, as a Category 4 storm.

Hurricane Laura is battering Louisiana this morning — and the coast isn't the only area that's threatened.

The storm surge for Laura could spread up to 30 miles inland in southwest Louisiana and Southeast Texas, reaching all the way to Interstate 10 potentially between Beaumont and Lake Charles.

Here's a look at where there's storm surge warnings: 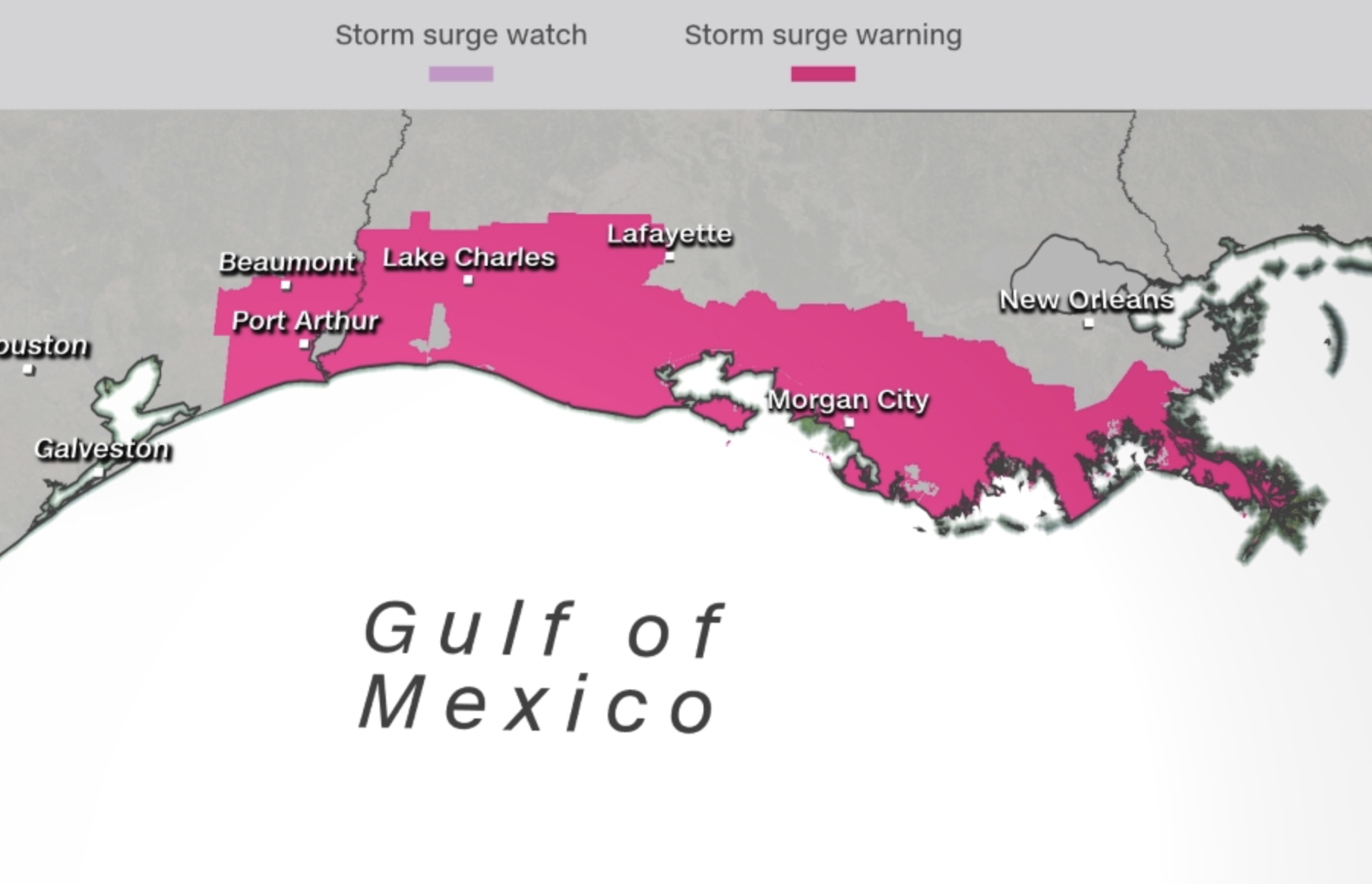