Ian has weakened to a tropical storm with winds of 65 mph and higher gusts, according to the 5 a.m. update from the National Hurricane Center.

Tropical Storm Ian is still expected to produce strong winds, heavy rains, and storm surge across portions of Florida, Georgia, and the Carolinas over the next 3 days, the center said.

A storm surge warning is in effect for the St. Johns River in northeast Florida, as well as areas stretching from the Flagler-Volusia County line in Florida north to the South Santee River in South Carolina. Portions of the Gulf Coast also remain under storm surge threat.

Tropical storm warnings have been issued for much of Florida's Gulf Coast, from north of Bonita Beach up to Indian Pass along the Panhandle.

After relocating due to Hurricane Ian and practicing in Miami Gardens on Wednesday, players and coaching staff for the NFL's Tampa Bay Buccaneers spoke about the effect the storm has had on them and their families, and expressed their well-wishes to those impacted by the storm.

"First of all, our thoughts and hearts go out to everybody in Tampa that's still there, hoping that they recover well and it doesn't hit them very hard," Bucs head coach Todd Bowles told reporters.

Running back Leonard Fournette, who was born in New Orleans, remembered the impact and devastation Hurricane Katrina had when it hit the Gulf Coast in 2005 and took the lives of 1,833 people.

"I've been through Katrina, as a kid," Fournette said. "I know how severe and serious it is ... I just thank God that we got out there and we're just praying for the families up there in Tampa."

Read more about the contingency plan to move Sunday's game in Tampa to Minnesota here: 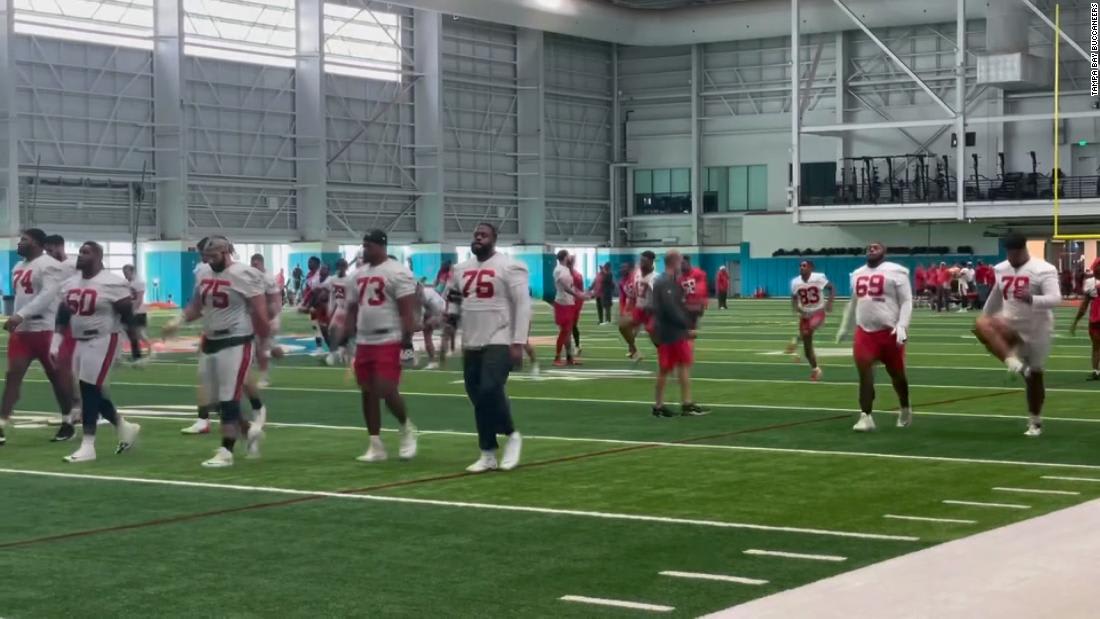 The Punta Gorda city water system is empty and boil water notices are in effect following the impacts of Hurricane Ian, according to an update from city officials late Wednesday.

The water system is "pumping at a rate of over 13 million gallons per day and cannot keep up,” the city said.

A fill station is being set up for residents at the city’s water plant, and the system will be restarted once damaged pipes are repaired, the update said.

Punta Gorda is the county seat of Charlotte County, which is reporting more than 90 percent of its customers without power, according to PowerOutage.us.

Rescue and emergency response missions have been delayed in some heavily-impacted parts of Florida because of risky storm conditions, state and local officials said.

Other counties have been inundated with emergency calls, with the Collier County Sheriff's Office saying they are in "triage mode."

"We are getting a significant number of calls of people trapped by water in their homes,” the office said in a statement Wednesday.

First responders in Fort Myers are now out surveying the damage, according to the Fort Myers Fire Department early Thursday morning.

“Crews have reported back with debris in the roadways, flooding, electrical lines down, power poles in the roads, traffic lights out, disabled vehicles, and building collapses,” the department said, asking for residents to remain indoors.

Gov. Ron DeSantis cautioned in a press conference Wednesday that 911 calls may not be answered right away in some areas.

“Local first responders will deploy as soon as it’s safe to do so,” DeSantis said, adding, “By and large until the storm passes, they are not going to go into a situation for rescue and put their own folks at risk."

WINK Chief Meteorologist Matt Devitt posted on social media, “Storm surge got into WINK, flooded out our entire set and newsroom in Fort Myers.  Lost power and I was unable to continue broadcasting on tv and radio.”

An update on the station's website indicated its newscast went off air during the brunt of the storm Wednesday afternoon.

“Storm surge and a flood brought by Hurricane Ian has interrupted the WINK News broadcast. The power went out just before 5 p.m., but anchors Lois Thomas and Chris Cifatte and Chief Meteorologist Matt Devitt continued to broadcast on Facebook for a period of time,” according to the station's website.

In the Orlando metro area, law enforcement reports flooding due to heavy rain. The area has already received a total rainfall of 8 to 12 inches and an additional 2 to 4 inches are expected. Heavy rain will continue to produce life-threatening flash flooding.

When driving, “be especially cautious at night when it is harder to recognize the dangers of flooding” the National Weather Service says.

Hurricane and tropical storm warnings across southern Florida have been dropped as Hurricane Ian moves farther north, according to an update from the National Hurricane Center.

The storm remains at Category 1 with sustained winds of up to 75 mph.

”Further weakening is expected for the next day or so, but Ian could be near hurricane strength when it moves over the Florida East coast later today,” the National Hurricane Center said.

The center of the hurricane is about 55 miles south-southeast of Orlando and is moving toward the northeast at 9 mph, approaching northeastern Florida, Georgia and South Carolina.

More than 2,300,000 customers across Florida did not have power as of early Thursday, according to PowerOutage.us. That's about 21% of all tracked customers in the state.

Twelve counties are reporting that more than 50% of tracked customers are without power. The most impacted areas are those directly in Hurricane Ian's path in the southwest, central and northeast regions of the state.

The county with the most total outages is Lee County, which includes Fort Myers and Cape Coral, with 425,717 customers without power -- roughly 90 percent. Nearly all customers in DeSoto County are also without power.

Thousands of people incarcerated in Florida prison facilities have been relocated or evacuated because of Hurricane Ian's impact, according to state and local officials.

The Florida Department of Corrections said Wednesday that approximately 2,500 inmates were moved to facilities "better equipped to weather the impacts of the storm." Nearly two dozen facilities were evacuated, it said.

Other jurisdictions say they have restricted activity or rehoused internally due to Hurricane Ian.

The Federal Bureau of Prisons said Wednesday that "certain inmate movement has been suspended and accountability procedures are in place" as a temporary measure during the storm.

In hard-hit Lee County, which includes Fort Myers, people held in the main jail facility were moved to a higher floor "out of an abundance of caution," the sheriff's office said Wednesday.