Tampa, Florida, Mayor Jane Castor warned Wednesday that the city hasn’t “even begun to feel the wrath of Hurricane Ian.”

“Our concerns clearly are still the wind, I never thought I would say that I was grateful to hear that we may endure tropical storm or a Category 1 hurricane force winds, but still the winds,” Castor told CNN’s New Day. “And the storm, you know, we’re going to bring in 18 to 20 inches into a community at Tampa Bay area that is already saturated.”

The mayor said flood warnings provided earlier will still be in effect, but fortunately the area had a couple of days to work on this due to prior predictions, meaning a lot of the coastal community have evacuated to higher ground.

The anticipated rainfall is “going to cause some flooding damage and still with the wind some damage as well,” she said. “But when you think about it, when that storm surge comes in and we’re trying to expel all of that rainwater through our stormwater systems, drainage, you know, that’s just not going to work. The water is going to continue to rise and we’re still going to have flooding.”

“We just trying to ensure that everybody in the Tampa Bay area doesn’t stand down,” Castor said. “We haven’t even begun to feel the wrath of Hurricane Ian.”

Her message to the people of Tampa over the next 24 hours remains the same, she said.

“Please stay on higher ground where it is safer,” she said. “Then once Ian, the effects of Ian, have traveled through our community, just be very considerate and aware of the fact that the majority of the injuries happen after the storm, with the downed power lines, with trees, water, standing water, just a number of different hazards out there that we need to pay attention to.”

Hurricane Ian has sustained winds over 155 mph, according to NOAA Hurricane Hunter plane data. The storm is located roughly 55 miles off the coast of southwest Florida.

After Hurricane Ian makes landfall in Florida, it is expected to crawl across the central part of the state.

Here's how a NOAA official explains it:

"We expect Ian's center to reach the coast later today. And then it's going to move slowly northeastward across the Florida peninsula, bringing widespread hurricane force winds, well inland — perhaps even as far inland as the Orlando metro area. And it's going to slowly move northeastward and emerge near the northeast coast of Florida — but not until Thursday night or early Friday morning," according to Michael Brennan, acting deputy director of NOAA.

"So we're going to have a very prolonged, heavy rainfall event. We could see widespread rainfall totals of 10 to 15 inches, Tampa, Orlando, up to near Jacksonville. And somewhere in there is probably going to get close to two feet of rain. We're going to have widespread catastrophic flooding impacts across much of northern and central Florida from this storm as well," he added.

Given Hurricane Ian’s strengthening to a 155-mph, high-end Category 4 hurricane on Wednesday, the National Hurricane Center is forecasting a catastrophic storm surge of 12 to 16 feet from Englewood to Bonita Beach, Florida, including Port Charlotte, Punta Gorda as well as Cape Coral and Fort Myers.

This means "you're not going to survive if you're in an area that's going to have 16 feet of inundation," Michael Brennan, acting deputy director of NOAA, told CNN on Wednesday.

"I'm six feet tall. That's almost like three times my height. It's not the just the rise of the water from the storm surge. It's the breaking waves on top of it that are going to be driven by those 155 mph winds. Those waves can destroy buildings and basically lay a foundation to bare down to the slab. That's not a situation you're going to survive in," he explained.

Residents in areas that are storm surge evacuation zones still have a few hours to leave and they should protect themselves today, Brennan urged.

Meanwhile, Ian is located about 55 miles west of Naples, moving north-northeast at 10 miles per hour, he said, adding that catastrophic impacts are expected along the southwest boarder coast today as the hurricane is just two miles shy of a Category 5 strength.

Hurricane Ian, a strong Category 4 storm with maximum sustained winds of 155 mph, is about 55 west of Naples, Florida, according to the National Hurricane Center's 8 a.m. ET update.

"Ian expected to cause catastrophic storm surge, winds, and flooding in the Florida peninsula starting later today," the center said in its updated public advisory.

Here's a look at the latest projected track for Hurricane Ian, which is forecast to move northeastward throughout the day and into tomorrow: 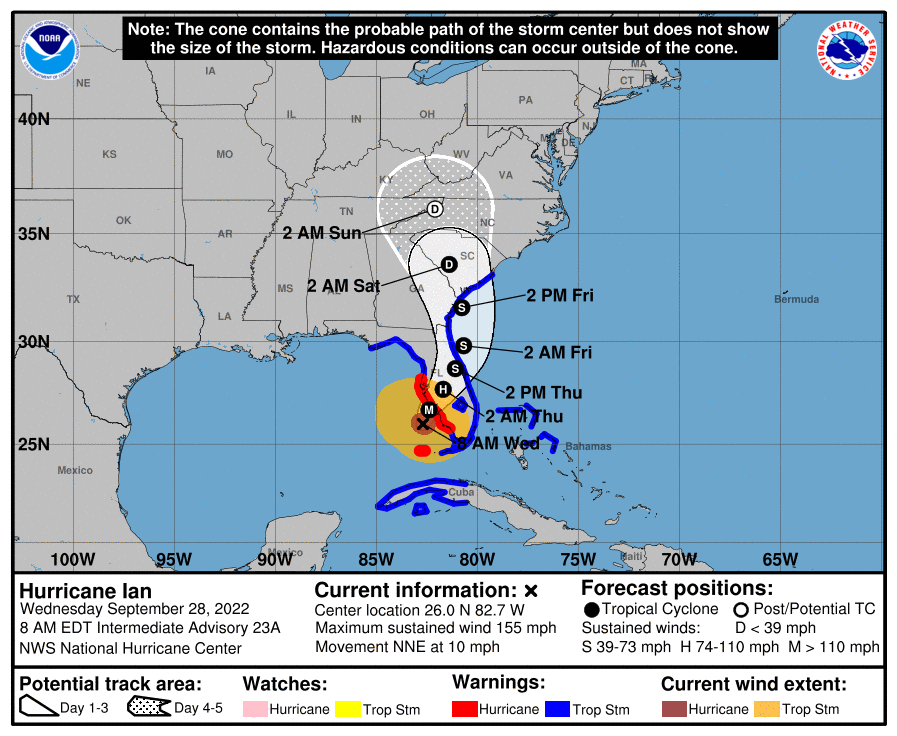 Emergency Services are currently suspended in Punta Gorda, Florida, as Hurricane Ian gets closer to land.

“Emergency services, including police, fire, and EMS, have been suspended in the City of Punta Gorda due to high winds,” a post on their website said. Once it is safe, emergency services will resume and “calls will be answered in order of priority,” the city noted.

After the storm goes through, officials warn response may be delayed “due to damage, road blockage, and flood waters.”

Clearwater, Florida, is a bit out of the projected path of Hurricane Ian, which is "good news," says mayor Frank Hibbard, but he warned that this does not mean residents should let up yet.

"Our biggest thing now is don't let up. We hate to see complacency because these bands are still going to bring with them tornadoes, incredible rains, and we will have downed trees. Just because the ground gets so saturated, the trees literally tip over, take out power lines and create very dangerous conditions," he explained.

While Clearwater authorities issued a mandatory evacuation order for residents, ultimately people make the choice, Hibbard told CNN, adding that at this stage, nobody can enter but people can still leave.

"But people need to know once winds hit 45 miles per hour, first responders are not going out," he stressed.

Clearwater is a vulnerable region and a lot depends on which side of the hurricane bands it falls on, Hibbard said.

"If we're on the wrong side of the bands, it's going to push incredible amounts of water. And just think of it as a bathtub. It's going to eventually overflow," he added.

Florida Gov. Ron DeSantis gave a briefing ahead of Hurricane Ian's expected landfall later Wednesday, warning residents in several western counties that it is "no longer possible to safely evacuate."

"This is a major, major storm. It's something that we knew was going to be significant. The strengthening of this over the last night has been really, really significant," DeSantis said.

"[It] potentially ... could make landfall as a Category 5 but clearly this is a very powerful, major hurricane that's going to have major impacts both on impact in southwest Florida, but then as it continues to work through the state, it is going to have major, major impacts in terms of wind, in terms of rain, in terms of flooding. So this is going to be a nasty, nasty day, two days. Probably, we think now, it will be exiting the peninsula sometime on Thursday," he said.

DeSantis warned the highest risk is from Collier County up to Sarasota County, with landfall expected in Charlotte County.

"If you are in any of those counties, it's no longer possible to safely evacuate. It's time to hunker down and prepare for this storm. This is a powerful storm that should be treated like you would treat" a tornado approaching your home, DeSantis said.

At least 40,000 power outages have been reported, DeSantis said. "Outside of southwest Florida, crews are responding to those power outages," he said.

According to the governor,​ "there are over 30,000 linemen staged and ready for power restoration efforts across the state of Florida."

He warned residents to heed warnings from local officials and not to go outside until the storm has passed.

"Even if it seems calm, wait to make sure that the storm has actually passed. Once the storm has passed and it's safe to go outside, I urge you to be cautious. Avoid downed power lines. Avoid standing water. Stay clear of damaged trees. If you are using a generator for power, make sure that is being operated outside your home. Do not operate that indoors. And then don't drive in flooded streets," he said.

DeSantis also said that there are 5,000 Florida National Guard members activated, as well as 2,000 from neighboring states.

Here are some key locations that will be impacted by Hurricane Ian and what CNN meteorologists expect when conditions begin to deteriorate, peak and subside.

This information is based on the latest forecast guidance and could still change. All times below are in ET.

Emergency services have been canceled in Cape Coral, Florida, as Category 4 Hurricane Ian gets closer.

“Emergency services Citywide are now suspended, and will resume normal operations after winds are below 45 miles per hour,” according to an update on Cape Coral’s Fire Department website.

Those who call 911 during this time will be put onto a “prioritization list” and “assistance will be provided as soon as it is safe,” the update said. All residents were asked to shelter in place.

Hurricane Ian has sustained winds over 155 mph, according to NOAA Hurricane Hunter plane data, and is located roughly 55 miles off the coast of southwest Florida.