Our live coverage of the aftermath of Hurricane Ian has ended for the day. See the latest news on the storm here or read the posts below.

Calling for evacuations is “always a difficult decision,” according to Ryan Lamb, Cape Coral Fire Department Chief and Emergency Management director, who spoke with CNN’s Jim Acosta on air Sunday afternoon by phone.

Cape Coral is in Florida's Lee County, where officials are being pressed over evacuation decisions and policies, per CNN’s reporting.

Parts of North Cape Coral were not included in county evacuation orders, according to a map from the Cape Coral Fire Department.

For areas of Cape Coral under evacuation order, Lamb said there was initial concern over how few residents were going to nearby shelters.

Officials knew the storm would be impactful and tried to increase public messaging around evacuating, Lamb said.

“The reason we call for evacuations is because we believe there is an imminent life threat,” Lamb told Acosta.

Water and power restoration is key for recovery efforts into the week, Lamb said.

Ian “obliterated” 98% of the city’s power structure, which will need complete reconstruction, according to Lamb.

Lamb said officials are working to increase points of distribution for food, water, and fuel throughout the city.

Officials in hardest-hit Lee County, Florida, are facing mounting questions about why the first mandatory evacuations weren't ordered until a day before Hurricane Ian's landfall —despite an emergency plan that suggests evacuations should have happened earlier.

Lee County’s evacuation orders also came a day or more after those of neighboring counties to the north.

The county's Comprehensive Emergency Management Plan states a 10% chance of 6 feet or more of water "would indicate the need" for hurricane evacuations in the most vulnerable areas.

National Hurricane Center advisories, reviewed by CNN, make first mention of “4-7 feet of surge" for that area as early as 11 p.m. ET Sunday — three days before landfall. That level of surge was predicted for an area from Englewood to Bonita Beach – which includes the entire Lee County coast.

By 8 a.m. ET Tuesday, around the time of the first evacuation message, the NHC upped the storm surge forecast to 5-10 feet. And by 11 a.m. ET, the forecast was expanded to 8-12 feet of storm surge for all of Lee County.

The county also opened its first shelters at 9 a.m. ET Tuesday. Later that day, the county expanded the order to all of Zone B.

Other counties in Ian’s path, such as Hillsborough, Pinellas, Manatee, Sarasota and Charlotte counties spent the day Monday issuing evacuation orders. And even before Hillsborough County issued the formal order, Tampa’s mayor was urging the public to evacuate.

“If you can leave, just leave now, and we will take care of your personal property,” Tampa Mayor Jane Castor told Kate Bolduan on CNN’s At This Hour around 11 a.m. ET Monday.

GOP Sen. Rick Scott, when pressed by CNN's Dana Bash, declined to assign blame in Lee County, saying, "We're going to look and find out" if proper evacuation procedures were followed. "I think once we get through this, we do an assessment. What I've always tried to do as governor is say, okay, so what did we learn in each one of these."

At a news conference on Monday, the day before the evacuation order was issued, Lee County Manager Roger Desjarlais rejected the notion that Hurricane Ian had been more challenging to plan for than other storms. He said the fact that his county had been within the predicted track of the center of the storm days prior suggested the storm would ultimately shift elsewhere.

“A couple days ago Fort Myers, Lee County was right in the very center of the cone of… uncertainty, and that’s really the best place to be, three or four days out because the storm will never ever behave that way.” Desjarlais said. “So, those variables always exist, and we train for and plan for all the changes in the characteristics of the storm.”

Desjarlais said on Monday that even though the county had not yet issued an evacuation order, residents should feel free to leave.

“If you’re feeling a little nervous about this storm and the effects, it’s okay to go now if you want,” Desjarlais said. “So, if you feel like it and you think it’s a good idea, now is a good time to get on the road and head to a safer part of the state.”

The delays were first reported by The New York Times, and Lee County Commissioner Kevin Ruane pushed back on the Times' account in an interview with Boris Sanchez on CNN's New Day Sunday, calling the report "inaccurate" and defending the timetable.

And Fort Myers Mayor Kevin Anderson told CBS’s “Face the Nation” Sunday morning that “warnings for hurricane season start in June. And so, there's a degree of personal responsibility here. I think the county acted appropriately. The thing is that a certain percentage of people will not heed the warnings regardless.”

CNN’s Keith Allen and Andy Rose contributed to this report

"While we've done 800-plus rescues, we have about 42 casualties," Marceno said

CNN is presently reporting at least 74 deaths in Florida from Hurricane Ian.

Note: CNN’s current death toll differs from the official toll released by the Florida Governor’s office for Hurricane Ian as there are inconsistencies in death tolls reported by local agencies and even among Florida state agencies.

About 65,000 more customers in Florida have had their power restored during the overnight and morning hours Sunday, according to the latest reporting from poweroutage.us.

However, 812,661 Florida customers remain without power, according to the site.

In North Carolina, 20,917 customers are without power as well as 7,907 customers in Virginia, according to the tracking website.

Anthony Grande moved away from Fort Myers three years ago in large part because of the hurricane risk.

He has lived in southwest Florida for nearly 19 years, had experienced Hurricanes Charley in 2004 and Irma in 2017 and saw what stronger storms could do to the coast.

Grande told CNN he wanted to find a new home where developers prioritized climate resiliency in a state that is increasingly vulnerable to record-breaking storm surge, catastrophic wind and historic rainfall.

What he found was Babcock Ranch — only 12 miles northeast of Fort Myers, yet seemingly light years away.

Babcock Ranch calls itself “America’s first solar-powered town.” Its nearby solar array — made up of 700,000 individual panels — generates more electricity than the 2,000-home neighborhood uses, in a state where most electricity is generated by burning natural gas, a planet-warming fossil fuel.

The streets in this meticulously planned neighborhood were designed to flood so houses don’t. Native landscaping along roads helps control storm water. Power and internet lines are buried to avoid wind damage. This is all in addition to being built to Florida’s robust building codes.

Some residents, like Grande, installed more solar panels on their roofs and added battery systems as an extra layer of protection from power outages. Many drive electric vehicles, taking full advantage of solar energy in the Sunshine State.

Climate resiliency was built into the fabric of the town with stronger storms in mind.

So, when Hurricane Ian came barreling toward southwest Florida this week, it was a true test for the community. The storm obliterated the nearby Fort Myers and Naples areas with record-breaking surge and winds over 100 mph. It knocked out power to more than 2.6 million customers in the state, including 90% of Charlotte County.

But the lights stayed on in Babcock Ranch.

“It certainly exceeded our expectations of a major hurricane,” Grande, 58, told CNN.

The storm uprooted trees and tore shingles from roofs, but other than that Grande said there is no major damage. Its residents say Babcock Ranch is proof that an eco-conscious and solar-powered town can withstand the wrath of a near-Category 5 storm.

“We have proof of the case now because [the hurricane] came right over us,” Nancy Chorpenning, a 68-year-old Babcock Ranch resident, told CNN. “We have water, electricity, internet — and we may be the only people in Southwest Florida who are that fortunate.”

Grande said Hurricane Ian came through southwest Florida “like a freight train.” But he wasn’t afraid that he would lose everything in a storm, like he was when he lived in Fort Myers.

“We’re very, very blessed and fortunate to not be experiencing what they’re experiencing now in Sanibel Island and Fort Myers Beach,” Grande said. “In the times that we’re living in right now with climate change, the beach is not the place to live or have a business.” 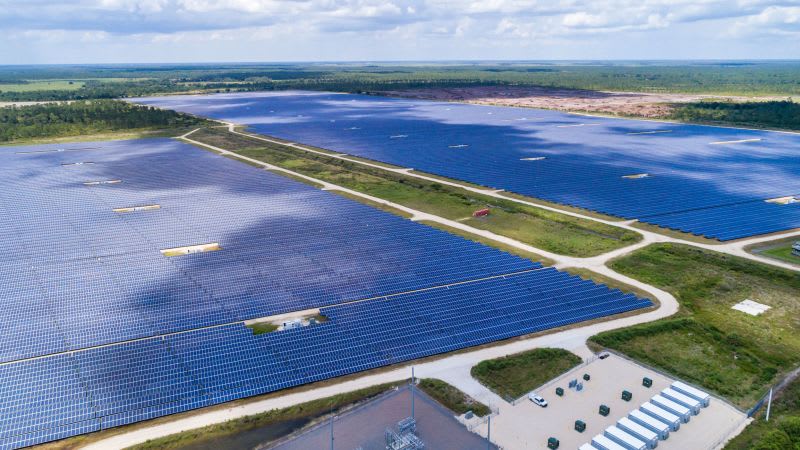 FL-TF1 team members are going door-to-door, checking on residents who stayed behind on Sanibel Island during the storm, according to MDFR.

“Throughout the search and rescue operations, our crews encountered several elderly residents that needed to be evacuated from those areas that have sustained severe structural damage and have been only accessible by air rescue,” MDFR said in the release.

The release added, “Due to the inaccessibility, evacuations operations have been conducted via helicopters. Assisted by the Florida National Guard and the United States Coast Guard, crews have been utilizing a hoist to rescue and transport residents out of the island and into a safe zone in the mainland where they can receive medical attention."

When the Hillsborough County Sheriff's Office (HCSO) went to a local Home Depot to purchase supplies to bring to Lee County, the store chipped in and donated, "$3,000 worth of supplies" to the cause, officials said.

"As our neighbors in Southwest Florida rebuild, our communities continue to stick together as one. #teamHCSO went to purchase supplies to bring down to Lee County and when they arrived the local Home Depot joined in a donated $3,000 worth of supplies to help with #HurricaneIan relief efforts!" the department said. "Our communities generosity and willingness to help never ceases to amaze us!"

Hillsborough County sits approximately 124 miles north of Lee County.  A majority of the storms' deaths are in Lee County according to a CNN tally.

HCSO also said it donated more than 500 tarps, "to help Lee County in any way we can."

Anderson said people have a degree of personal responsibility for evacuating, as warnings for hurricane season start in June.

“Certain people will not heed the warnings, regardless,” Anderson said.

Anderson said electricity and water service is slowly returning to his city.

According to Anderson, most of the damage in Fort Myers came from flooding along the river.

Anderson said good building codes will be the key to solving the issue of future hurricane destruction as newer homes withstood Ian, whereas older homes, not built to current codes, did not.

“As people tear down and build new, they will be subject to newer, tougher building codes,” Anderson said.

CNN is reporting 67 storm-related deaths in Florida as of Sunday morning.