The Cape Fear River in southeastern North Carolina is expected to rise to record levels as Hurricane Florence hits the East Coast.

The river, currently at just 3.77 feet, will rise more than 20 feet in the next three days, according to data from the National Weather Service.

The rise of the Cape Fear River in Chinquapin will occur as a result of heavy rainfall from Hurricane Florence and storm surge entering the mouth of the river.

It's expected to surpass the previous record of 23.51 feet, set during Hurricane Floyd in 1999.

Here's an image of what nearby Wallace, North Carolina looked like in 1999 during that storm:

Airlines have canceled all remaining flights in and out of Myrtle Beach International Airport, according to a statement from the airport.

Airlines will begin to decide when to resume operations after Hurricane Florence makes landfall, the airport said.

The airport is still open, but there are no commercial operations available and the facility is not operating as a hurricane shelter.

Hurricane Florence is still a Category 2 storm, and it has sustained winds of 105 mph, according to the latest forecast advisory from the National Hurricane Center.

The center will release its next forecast at 2 p.m. ET. You can also follow Hurricane Florence's path with CNN's storm tracker.

Here's the latest projection from the 11 a.m. ET update: 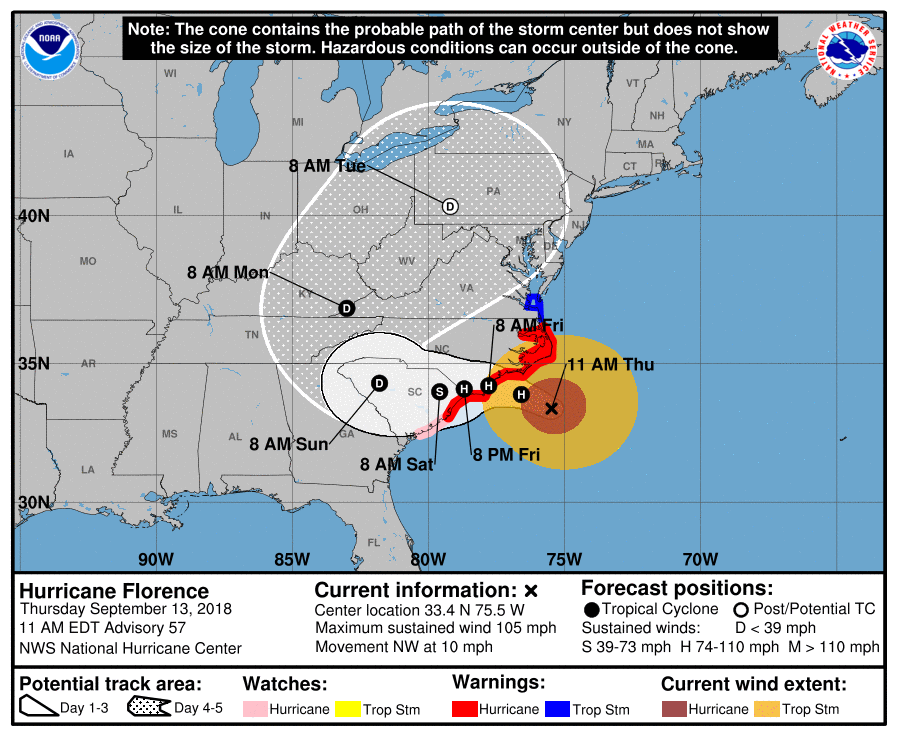 The US House of Representatives announced that there will be no longer be votes tomorrow.

House Majority Leader Kevin McCarthy confirmed that decision to cancel votes was to allow members to get home ahead of Hurricane Florence.

The House was previously scheduled to be on recess next week. 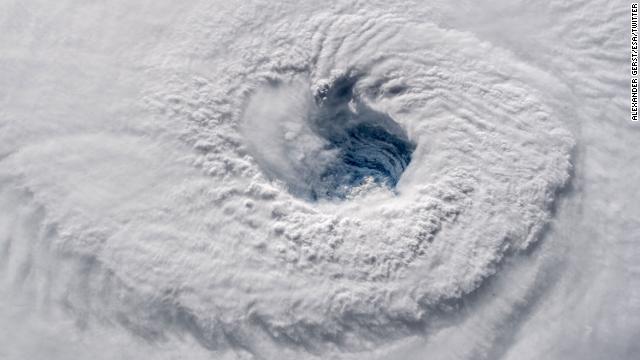 Hurricane Florence was downgraded to a Category 2 storm, but it's still a powerful, dangerous Hurricane. Here's a look at the latest statistics and facts:

The homes along the beach are built on stilts — but the system may not protect the houses this time. The stilts on many of the houses are about 7 feet tall.

"If we get a 9 foot storm surge, which we're expecting, that means the water's going to wash right over those stilts, right into the living room and kitchen at that house, and the stilts won't make any difference," Berman explained.

North Carolina Gov. Roy Cooper detailed the steps the state has taken ahead of Hurricane Florence. Here are the latest numbers:

Meanwhile, energy companies are estimating there could be millions of power outages.

“This storm will bring destruction for North Carolina," Cooper said. 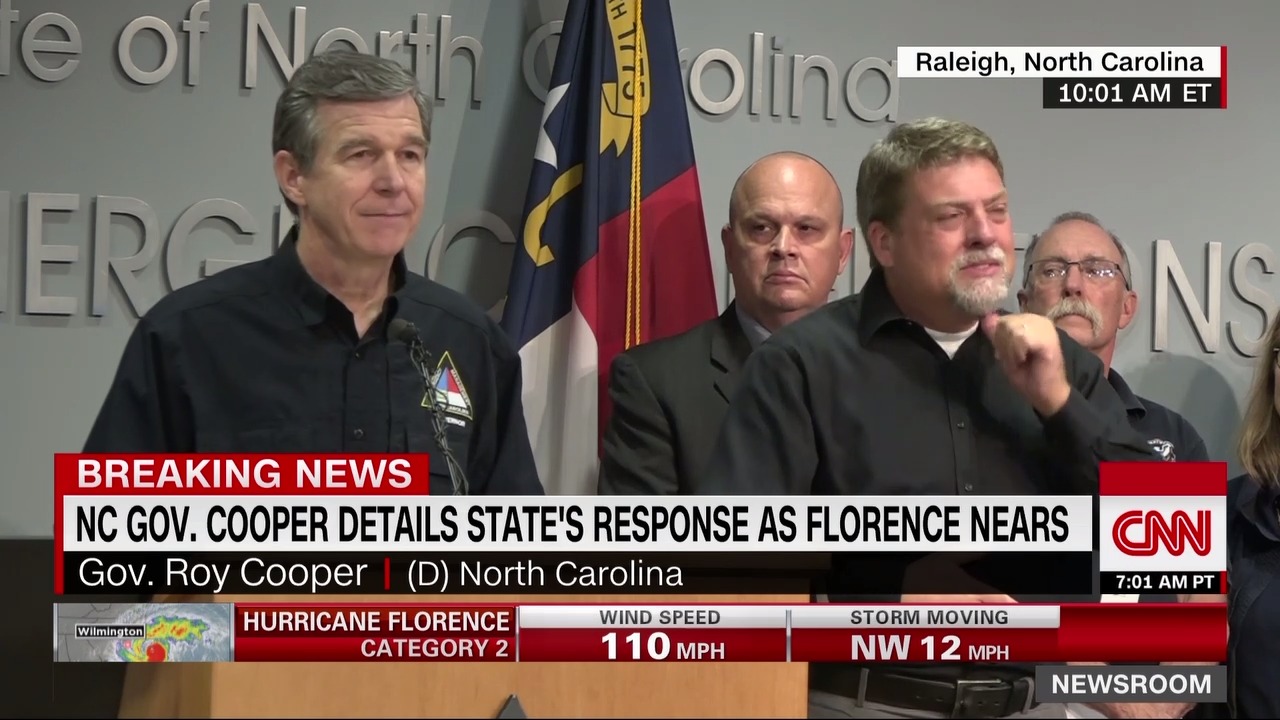 "Many North Carolinians see updated storm tracks, changing categories of the hurricane and landfall predictions. I’m concerned because I've even heard some people say that North Carolina's getting a break. Please hear my message: We cannot underestimate this storm," he just said at a news conference.

Cooper continued: “My message today: Don’t relax; don’t get complacent. Stay on guard. this is a powerful storm that can kill, today the threat becomes a reality. Get yourself to a safe place and stay there if you haven’t already”

He pointed to 2016's Hurricane Matthew, a deadly storm that which wreaked havoc on the Carolina coast.

"Remember that hurricane Matthew didn't even make landfall in North Carolina and look what it did to us," he said. 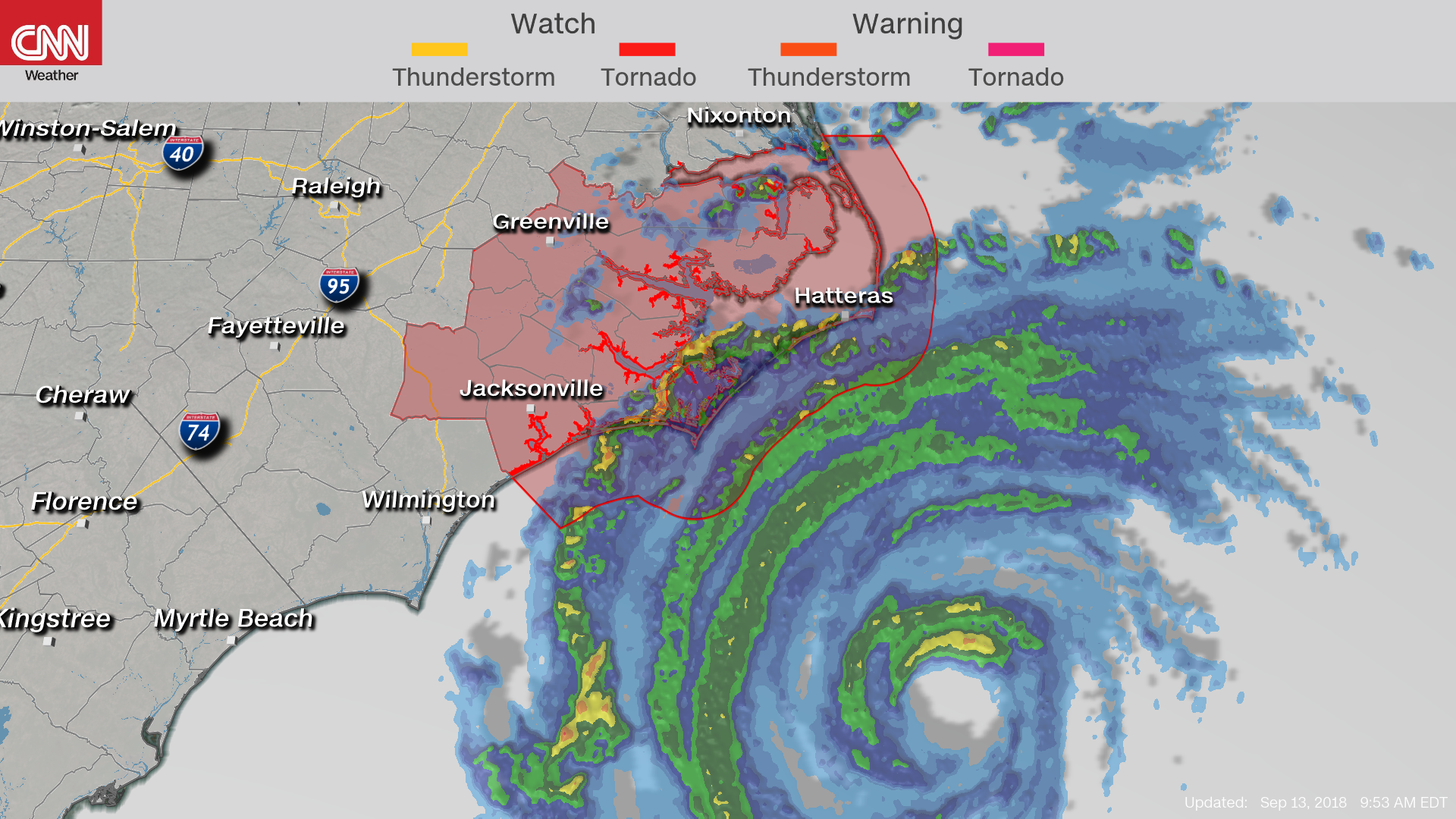 Part of North Carolina has been put under a tornado watch as Hurricane Florence nears the East Coast. The watch extends from north of the Wilmington area up to Nags Head.

Here's what that means, according to the National Weather Service:

"A Tornado Watch means conditions are favorable for tornadoes and severe thunderstorms in and close to the watch area. Persons in these areas should be on the lookout for threatening weather conditions and listen for later statements and possible warnings."