Hurricane Dorian has killed five people on the Abaco Islands of the Bahamas, the Prime Minister told reporters Monday afternoon.

Gov. Ralph Northam has declared a state of emergency in advance of Hurricane Dorian, which is expected to impact southeastern Virginia Thursday.

The impact from Dorian could include coastal and inland flooding, storm surge, damaging winds and prolonged power outages, the governor's office said in a news release Monday afternoon.

“Hurricane Dorian is a serious storm, and current predictions indicate that it may affect parts of Virginia. I am declaring a state of emergency to ensure that localities and communities have the appropriate level of assistance, and to coordinate the Commonwealth’s response to any potential impacts from Hurricane Dorian. I encourage Virginians to take all necessary precautions to make sure they are prepared as well," Northam said.

A state of emergency allows the Commonwealth to mobilize resources and to deploy people and equipment to assist in response and recovery efforts, the governor's office added. The declaration also allows officials from Virginia to coordinate planning and evacuation resources with the state of North Carolina.

This action does not apply to individuals or private businesses. 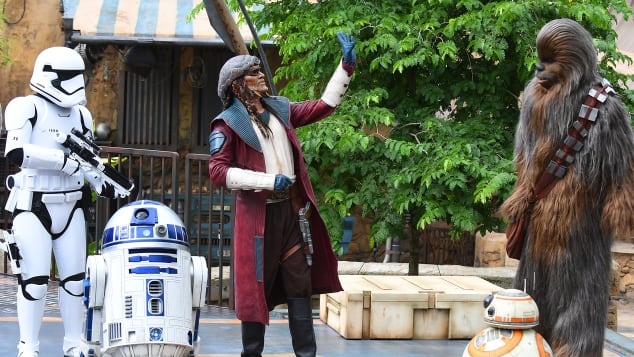 Walt Disney World is adjusting its hours Tuesday ahead of Hurricane Dorian, which is expected to get close to Florida this evening.

Disney resort hotels will remain open, but Disney’s Fort Wilderness Resort and Campground will be closed beginning Tuesday at 3 p.m. ET and will reopen following the storm when it is safe to do so.

Here are the other adjustments being made around Disney on Tuesday:

Pilots with the National Oceanic and Atmospheric Administration flew through the eye of Dorian.

A team of hurricane hunters aboard the Lockheed WP-3D Orion N42RF, also known as "Kermit," recorded a video of the powerful storm.

Dorian is moving very little as it continues to pound Grand Bahama island, the National Hurricane Center said in its 5 p.m. ET update.

The storm is slowly moving westward at a rate of less than 1 mph.

A turn to the northwest is forecast by late Tuesday, with a northeast movement forecast to begin by Wednesday night.

With Hurricane Dorian expected to get close to Florida this evening, it's probably worth brushing up on the differences between a hurricane watch and warning.

The National Weather Service has provided some clear definitions for each; check them out below:

Orlando International will "cease commercial operations" at 2 a.m. ET on Tuesday, the airport announced on Twitter.

The airport's region is currently under a Tropical Storm watch, the statement said, and is expecting winds between 40 and 45 mph.

The airport encouraged passengers to contact their individual airlines about changes to their flight schedule.

Flagler County, Florida, has issued a curfew for evacuation zones A, B and F – starting at 7 p.m. Tuesday until further notice, according to a release from Flagler County Emergency Services.

A Shell gas station was allegedly selling a 24-count case of water for $9 while the original price was $3.98, according to a copy of the complaint provided to CNN by the attorney general's office.