US Agency for International Development Administrator Mark Green announced $1 million in additional humanitarian assistance to help people in the Bahamas affected by Hurricane Dorian. That brings USAID's funding for the response to more than $2.8 million, the agency said in a news release.

The funding will provide food, shelter, water containers and hygiene kits to people on the Abaco Islands and the Grand Bahama Islands, Green said. It will also help transport US government supplies to the Bahamas by air and by sea.

More than 47 metric tons of USAID supplies have arrived in the Bahamas so far to assist about 44,000 people, the agency said. It added that its partner, the Bahamas Red Cross, will also distribute supplies including hygiene kits, portable stoves and towels to people affected by the hurricane.

About 70,000 people in the Bahamas have been left homeless after Hurricane Dorian flattened their neighborhoods. The death toll, now at 43, is expected to rise drastically, officials said.

Dorian has once again strengthened into a Category 2 storm, with maximum sustained winds of 100 mph, according to a special advisory from the National Hurricane Center.

The storm had been expected to maintain Category 1 strength as it moved through the Canadian Maritimes and then finally weaken when it crossed into the Gulf of St. Lawrence, according to CNN meteorologist Allison Chinchar.

If Dorian maintains Category 2 strength when it makes "official" landfall over Halifax, Nova Scotia, it will be the strongest storm to hit the provincial capital since Hurricane Juan in 2003.

A quick refresher on storm categories: Meteorologists use the Saffir Simpson Hurricane Wind Scale to measure a hurricane's strength. 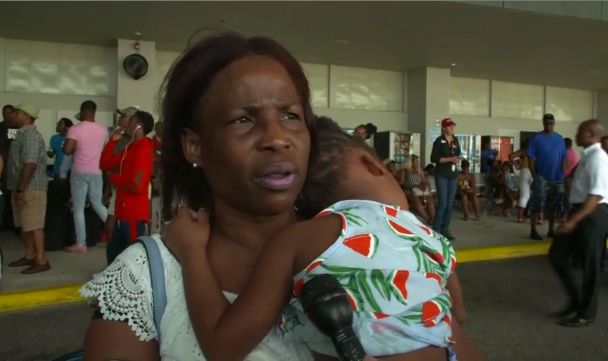 Seymour described how the roof of her home on Grand Bahama Island began to lift up due to the high winds at the height of Hurricane Dorian. She said she and her husband used basic tools like ropes, nails and hammers to cinch the roof of their home to the floor.

"It was very intense. You couldn't sleep," Seymour said. "I prayed a lot and asked God to calm the storm."

Though her roof managed to stay on, others weren't as fortunate, she said. Some of her relatives who live on the north side of Grand Bahama Island lost their homes entirely due to flooding.

Now, Seymour said she and her family are headed to her sister's house in Port St. Lucie, Florida, until Grand Bahama Island has water and electricity again. And though the past week has been incredibly stressful, she said she's grateful. Not everyone in the Bahamas has family members in Florida who they can stay with temporarily. Others aren't able to leave because they don't have passports.

"Having to travel here is a burden eased off us," Seymour said. "Because at least we have an opportunity to relax, whereas some others in the Bahamas can't even have this privilege."

"It hurts my heart," she added.