Heat wave descends on the US 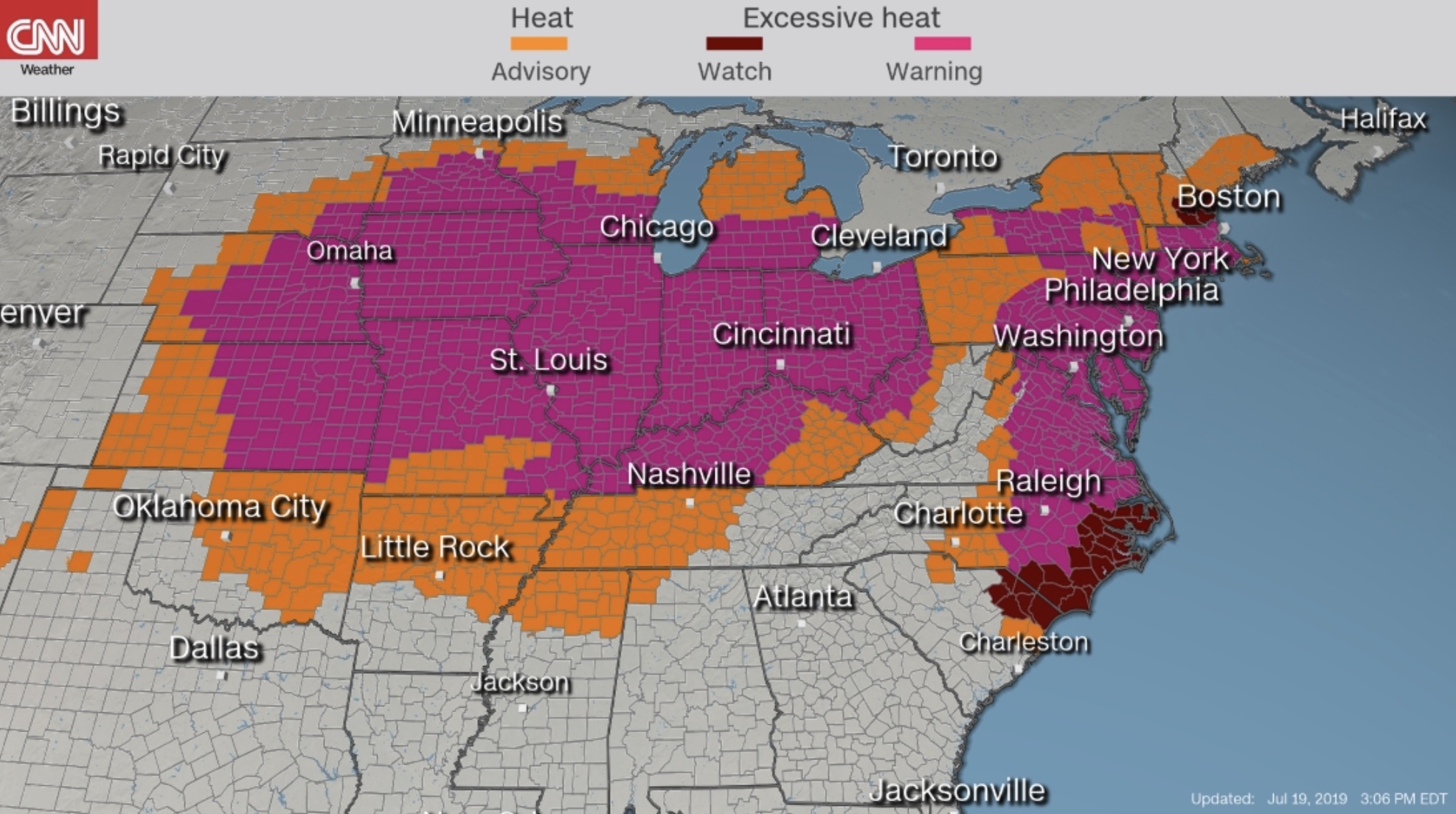 A dangerous heat wave began descending on the US Friday, and the extreme heat is expected to continue this weekend.

Our live coverage has ended, but you can keep tracking the heat wave here.

Here's what you need to know about the heat: 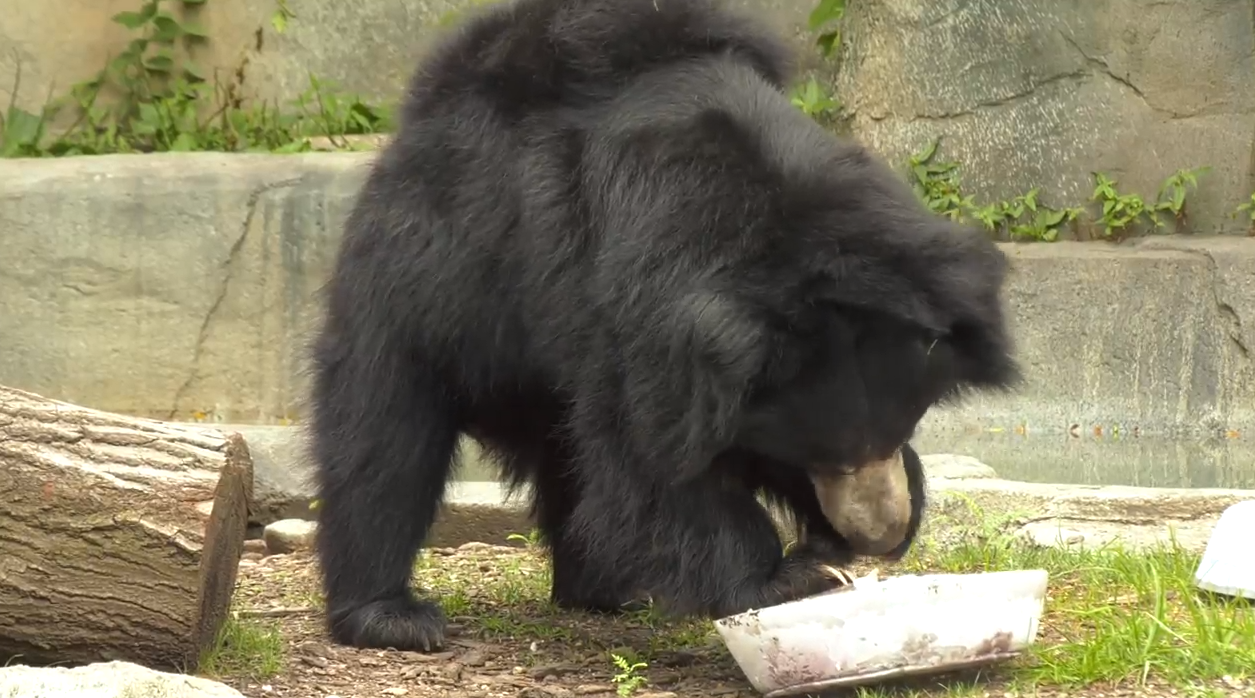 Animals at the Brookfield Zoo in Illinois are staying cool with some frozen treats.

The zoo's staff has been giving several animals –– including polar bears, grizzly bears, tigers, sloth bears and even the rhino –– ice to help them keep cool in the extreme heat, the zoo said in a release Friday.

So what's inside the animals' popsicles? The zoo said what was inside the ice depended on the animal: Some were filled with fruits and vegetables while others had bones and meat. The blocks of ice that the polar and grizzly bears received weighed 300-pounds.

The cultural festival, now in its fourth year, was scheduled to feature...

Fifty performers were scheduled for the festival in Central Park on Saturday and Sunday.

It's going to be so hot in the Chicagoland area that the regional rail service Metra is going to have to slow trains down.

"When temperatures exceed 95 degrees, Metra is required to reduce train speed by 10 mph," Metra said in a tweet.

That allows them to compensate for what it says is, "heat related stress on the tracks."

New York Utility company Con Edison President Tim Cawley said Friday at a press conference that the heat wave has “no impact at all” in the infrastructure that was damaged in last weekend’s blackout that saw 73,000 customers without power. Cawley said that the equipment involved in that event has been repaired and that the company prepares for periods of intense heat throughout the year.

His comments come after Mayor Bill de Blasio ordered office buildings 100 feet or taller to set their thermostats to 78 degrees to conserve energy, and is asking New Yorkers to do the same in their homes to avoid power disruptions throughout the weekend.

Cawley said that the mayor’s call for conserving energy is good for three reasons: “it’s good for the environment, it lowers bills, and in a period like this, it just takes a little bit of the edge off the demand on the system.”

He added that New York’s peak energy consumption happens on weekdays and that while power demand is still high on weekends, the grid can handle that amount.

“We’re ready for what the heat will bring, and as I said, we expect demands this weekend to rival all-time weekend peaks,” Cawley said. “The system overall peaks during the weekday, and I think it’s fairly intuitive, when all the businesses are in, on a Tuesday or Wednesday, the demand is the highest, on the weekend it remains high, but it’s not the peak demand. When we compare weekend to weekend, we are going to rival all-time demand.”

Cawley said Con Edison is “poised to respond” to any outages that might happen this weekend. The demand on the system this weekend is projected to be between 11500 to 11900 megawatts. One megawatt, Cawley explained, powers about one thousand homes, and the system is designed to handle 13200 megawatts of demand.

When comparing to previous weekends of similar usage, and Cawley said that there were scattered outages despite the system’s performance being “very strong.” 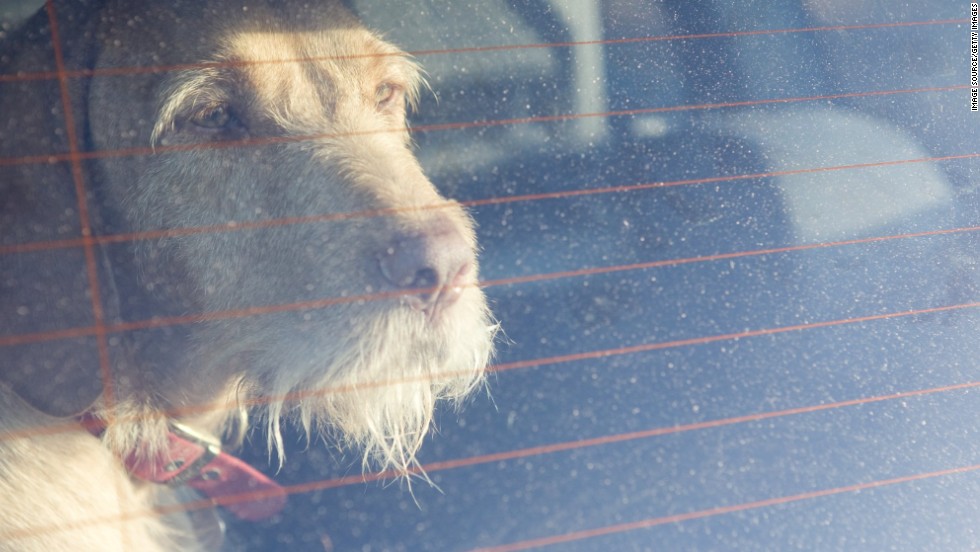 About 185 million people across the US are under a heat watch, warning or advisory as of Friday morning –– and forecasts say it's only going to get hotter.

This means it's important to make sure your furry, four-legged friend doesn't overheat.

Here are some tips from the ASPCA on how to keep your pets cool:

Another important aspect to keeping your pet safe in extreme heat is knowing the signs of heat stroke.

The Humane Society of the United States tweeted some of the signs to watch for:

Officials are urging people to conserve energy during this weekend's heat wave.

New York Mayor Bill de Blasio said on Friday that the heat emergency declared Thursday, and calls for energy rationing this weekend, are out of an “abundance of caution."

The mayor signed an executive order directing office buildings 100 feet or taller to set their thermostats to 78 degrees to conserve energy, and is asking New Yorkers to do the same in their homes.

Speaking with host Brian Lehrer on radio station WNYC, de Blasio said utility company Con Edison has not given him “good enough answers” on the reason for New York’s power outage last weekend, but told him overload was not it. He said the company told him an overload is not predicted for this weekend, but residents should cut back just to be sure.

The president of Con Edison in New York, Tim Cawley, agreed with the importance of conserving energy.

“Its always a good thing to do but it's particularly good in this period because it reduces some of the demand on the system, customers will save money and it's good for the environment," Cawley said at a news conference Friday.

It's not just New York: About 185 million people are under a heat watch, warning or advisory as of Friday morning.

The heat warnings cover a large swath of the Midwest, including Chicago, St. Louis, Cleveland and Omaha, as well as parts of the East Coast, including New York City, Philadelphia, Boston and Washington, DC.

Here's how to maximize your energy efficiency, according to National Grid:

The New York City Fire Department has a warning for anyone who wants to cool off with a fire hydrant: Don't do it yourself.

City residents can request a spray cap be installed on their neighborhood hydrants.

"Do not open fire hydrants yourself as it depletes water sources and water pressure, making it difficult for firefighters to fight fires," a New York City firefighter Sophy Medina explained in a Twitter video.

The forecasted temperatures during this weekend's heat wave will only tell part of the story –– it's going to feel a lot hotter.

But what is more important is the heat index.

What is a heat index: It is also called "apparent temperature." It's a combination of air temperature and humidity, and it measures what the body actually feels, CNN meteorologist Haley Brink said.

Brink said we should pay attention to heat index because of the way humans cool down.

"We cool down by sweating, and that sweat evaporates off of our bodies, in turn decreasing our body temperature," she said. "When it is really humid outside, the rate of sweating decreases, so it actually feels warmer outside than it is."

For example, in Chicago — with a predicted temperature Friday of 98 degrees Fahrenheit and relative humidity of 58% — can expect it to feel like 118 degrees, she said. 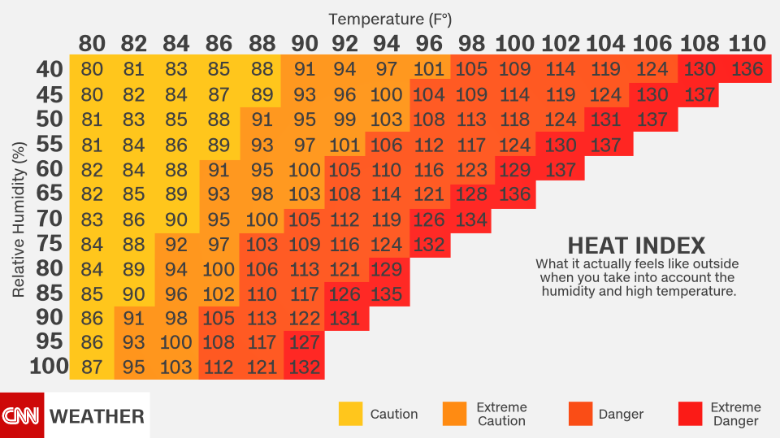 The heat index can get even higher when you consider what it feels like in the sun. These numbers on this chart are calculated in the shade, Brink said.

In "direct sunlight, the heat index value can be increased by up to 15 degrees Fahrenheit," according to the National Weather Service.

Brink said the best way to stay safe in the heat is to drink lots of water, wear lightweight, light-colored clothes and to stay near an air-conditioner.