James Webster, a geologist with the American Museum of Natural History in New York, walked us through the science of a term we've been hearing a lot today: lava bombs.

"Lava bombs are actually — it was molten material that was blown out of a fissure, or a small cone in the ground. And it's cooling as it moved through the air, but it's still very high temperatures."

The bombs are propelled through the air by "expanding gases," he said.

Hawaii resident Tam Hunt's neighbors' home is falling into cracks in the earth caused by fissures that opened up due to volcanic eruptions.

He shot this video of the scene:

The couple that lives in the home evacuated earlier this month.

Hawaii resident Tam Hunt shot these photos of his neighbors' home falling into cracks in the earth caused by fissures that opened up due to volcanic eruptions.

The couple that lives in the home in Puna evacuated earlier this month when the Hawaii County Civil Defense ordered a mandatory evacuation for Leilani Estates, the subdivision where the house is located.

“My other next door neighbors’ house falling into the same large crack in my backyard," Hunt wrote on Facebook.

Here's another angle of the house slipping into the crack: 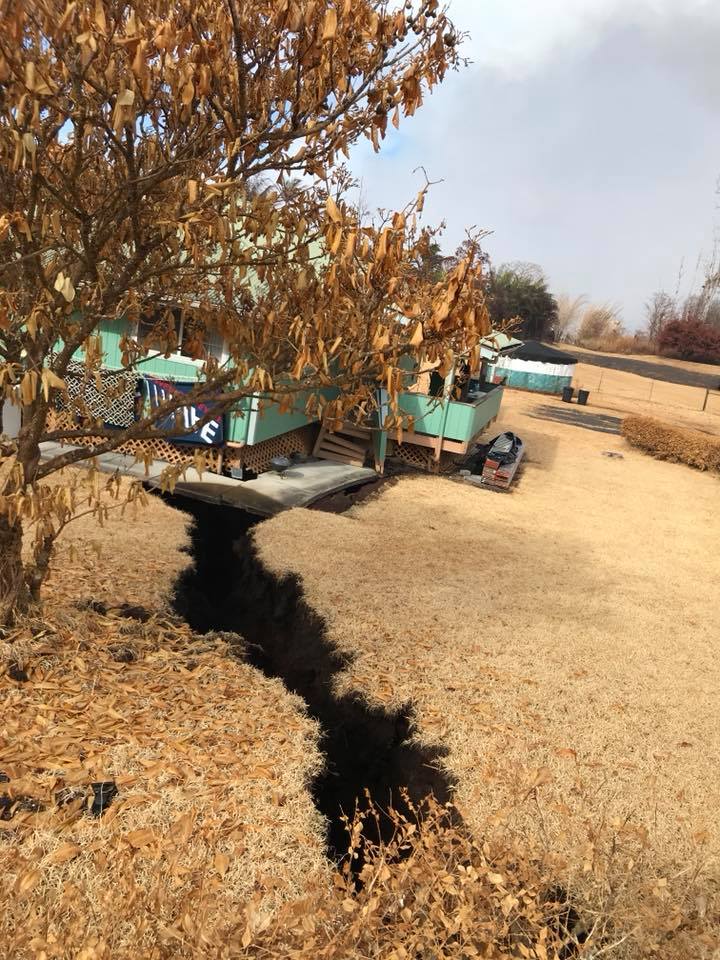 Richard Allred is visiting Hawaii from Alexandria, Virginia. He flew in a helicopter above the Leilani Estates fissures yesterday and captured these images.

“Hard to distinguish what used to be homes and other structures. Complete and total destruction,” he tells CNN. 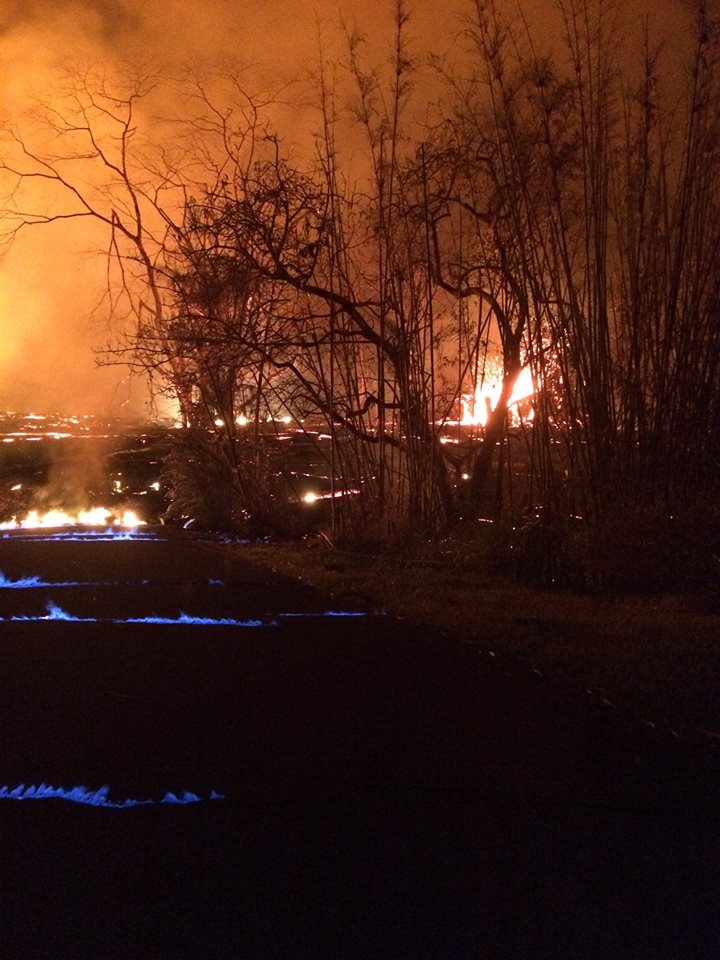 The United States Geological Survey shared a photo of the volcano eruption with striking blue flames peeking through the cracks of the street.

That's the blue flame of methane gas, a byproduct of burning vegetation. The USGS explains it like this:

When hot lava buries plants and shrubs, methane gas is produced as a byproduct of burning vegetation. Methane gas can seep into subsurface voids and explode when heated, or as shown in this image, emerge from cracks in the ground several feet away. When ignited, the methane produces a blue flame.

The United States Geological Survey just shared a map of the volcanic activity — which includes a new lava flow.

"Note a new lava flow that was observed during this morning's overflight west of the active channels," the agency wrote on Facebook.

However. the flow field "has not expanded significantly during the past day," the USGS reports. 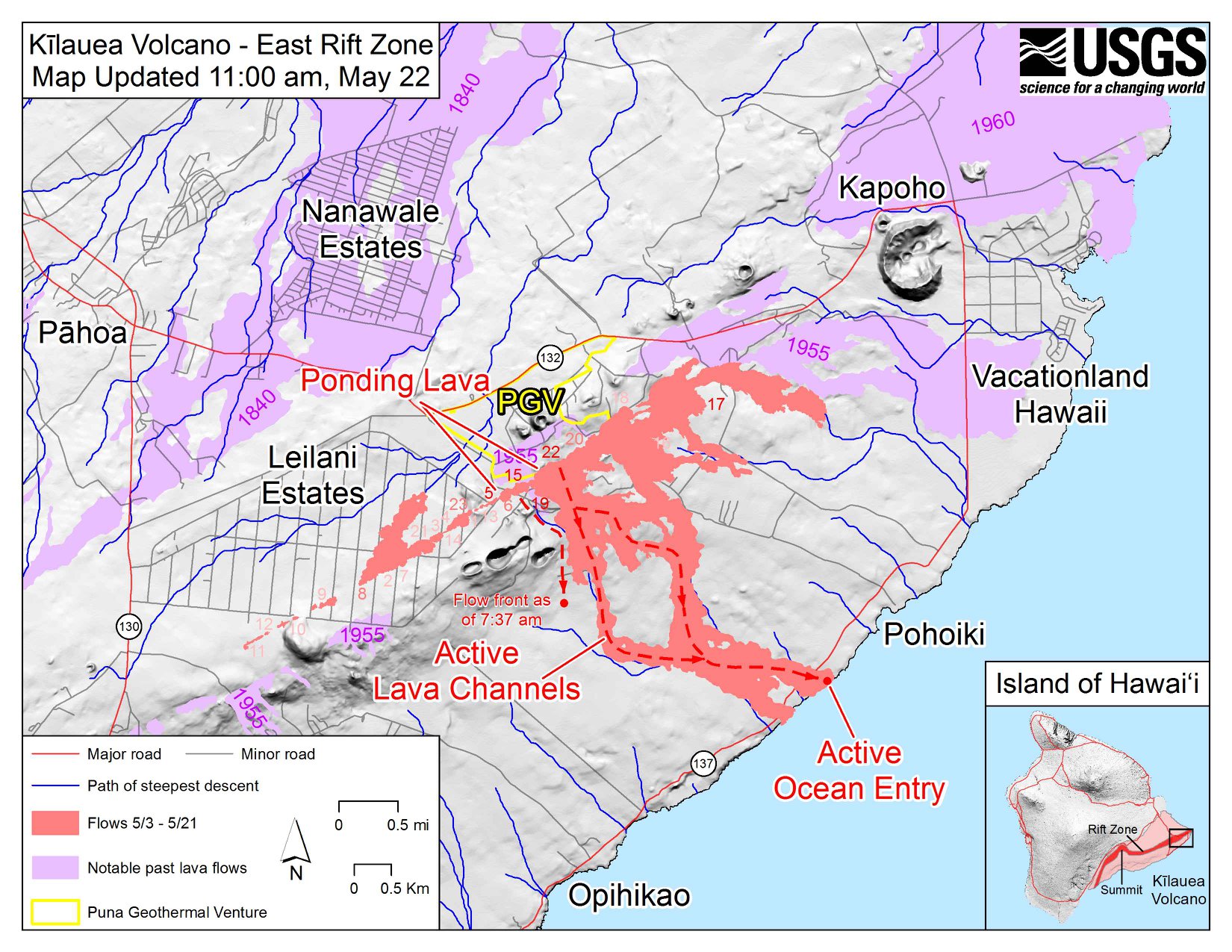 Darryl Clinton was using a fire extinguisher and a garden hose to defend him home — and his neighbors' — from the volcano when he was hit with a lava bomb.

A lava bomb is essentially a flying chunk of molten rock. The bombs have hit houses: Heaps of flaming rock shattered windows and destroyed a septic tank, setting it ablaze with a blue flame of burning methane gas.

Clinton was talking on his cell phone when a bowling ball-sized lava bomb hit him in the leg while he was on the porch.

"'That didn't just happen' was my first thought," he said Tuesday. "I knew it was real because of the pain."

The fiery bomb snapped bones in his leg.

"Then I got caught on fire, fell on the floor, grabbed my foot and leg and held 'em together."

"The camera used for the sequence looks eastward toward the town of Hilo (center), which is mostly obscured by clouds. The moon illuminates the landscape early in the sequence. Later, the setting moon (behind the camera) casts shadows of Gemini and several Maunakea observatories as well as a projection of the mountain onto the atmosphere."

The United States Geological Survey posted this photo of the Kīlauea Volcano to its Facebook page:

"Eruption of lava and ground cracking continues in the area of Leilani Estates subdivision," the agency wrote.