Harvey Weinstein turns himself in to police

Manhattan District Attorney Cyrus R. Vance, Jr., filed felony sex crime charges against Harvey Weinstein for two incidents — one in 2013 and another in 2004, his office said in a statement.

“Today’s charges reflect significant progress in this active, ongoing investigation,” Vance said. “I thank the brave survivors who have come forward, and my Office’s prosecutors who have worked tirelessly on this investigation."

Here's a breakdown of the charges: 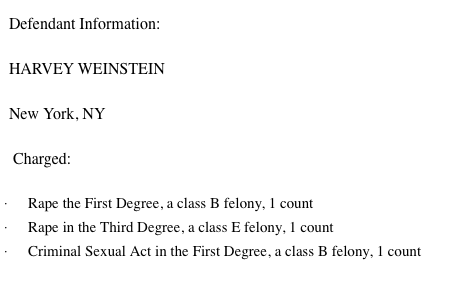 The mega producer walked into a New York City courthouse carrying an armful of books. Two of those books are biographies about men in the entertainment business.

The book with the red cover is "Something Wonderful" by Todd Purdum. It's a nonfiction about the relationship between Broadway legends Richard Rodgers and Oscar Hammerstein II.

Another book Weinstein brought with him is "Elia Kazan: A Biography" by Richard Schickel, another nonfiction about the famed American director. 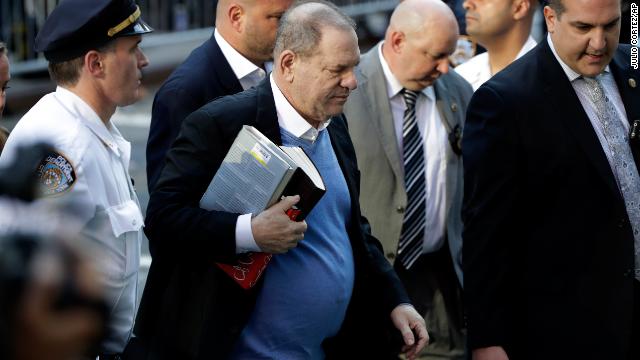 A New York judge set a staggering $10 million bond for Harvey Weinstein. He can also pay $1 million in cash.

Weinstein also had to surrender his passport and has to wear a GPS tracking device.

President Trump was just asked his reaction to Harvey Weinstein's arrest this morning. He responded: "I don't know anything about it."

Trump was asked a follow-up and replied, "I'm not familiar with the case. But it's really too bad. Really too bad."

The actress, who is also one of Weinstein's accusers, tweeted this as he arrived in court:

McGowan publicly accused the mega-producer of rape in October.

As his attorney Benjamin Braffman walked in, he told the media, “I’ll talk to you after court.”

The criminal sex act charge stems from a case involving Lucia Evans, according to a source familiar with the investigation. Evans alleges Weinstein forced her to perform oral sex on him in his Tribeca office in 2004.

The allegations: The aspiring actress first spoke of her allegations against Weinstein to The New Yorker last fall saying, “He’s a big guy. He overpowered me."

She added, "I just sort of gave up. That’s the most horrible part of it, and that’s why he’s been able to do this for so long to so many women: people give up, and then they feel like it’s their fault."

The victim in the rape case leading to first and second degree rape charges has not been publicly identified, the source says.

In the past months, after the New Yorker article was published, Evans has not responded to any requests for comment by CNN.

Harvey Weinstein was walked into the New York County Supreme Court moments ago.

Earlier today, he turned himself into a New York Police Department station, where he was charged with rape, a criminal sex act, sex abuse and sexual misconduct for incidents involving two separate women. He left the police precinct in handcuffs.

He turned himself in earlier this morning, and he was charged with rape, a criminal sex act, sex abuse and sexual misconduct. for incidents involving two separate women.