Our live coverage of the anti-racist protests has moved here.

Seattle Police Chief Carmen Best said the city is "not under siege" and that the police are "still responding to every single call in every area of the city."

Protesters have occupied a six-block zone around a downtown precinct, with some calling it CHAZ for Capitol Hill Autonomous Zone or CHOP for the Capitol Hill Occupied Protest.

Best said the occupied area is a "delicate situation" but "not a situation where there is lawlessness."

"The last thing I want to do is have any issue of violence occurring in the area, so we are very judicious about how we do it and how we go in," she said.

Last week, the police department pulled officers out of the precinct as tensions between officers and protesters boiled over. The abandoned precinct has been spray painted with a sign that says: "Seattle People Department East Precinct."

Best said that they are working with the protesters to try and resolve the situation.

"What we have is a situation where people have occupied an area, and we are working with them. The city is working with them, and has negotiators to work with them to have a peaceful resolution," she said.

Best also said that the barricades are preventing them from "going in as quickly and efficiently as we would like to" and the fact that officers are not in the precinct has increased response times "across the entire East precinct area." 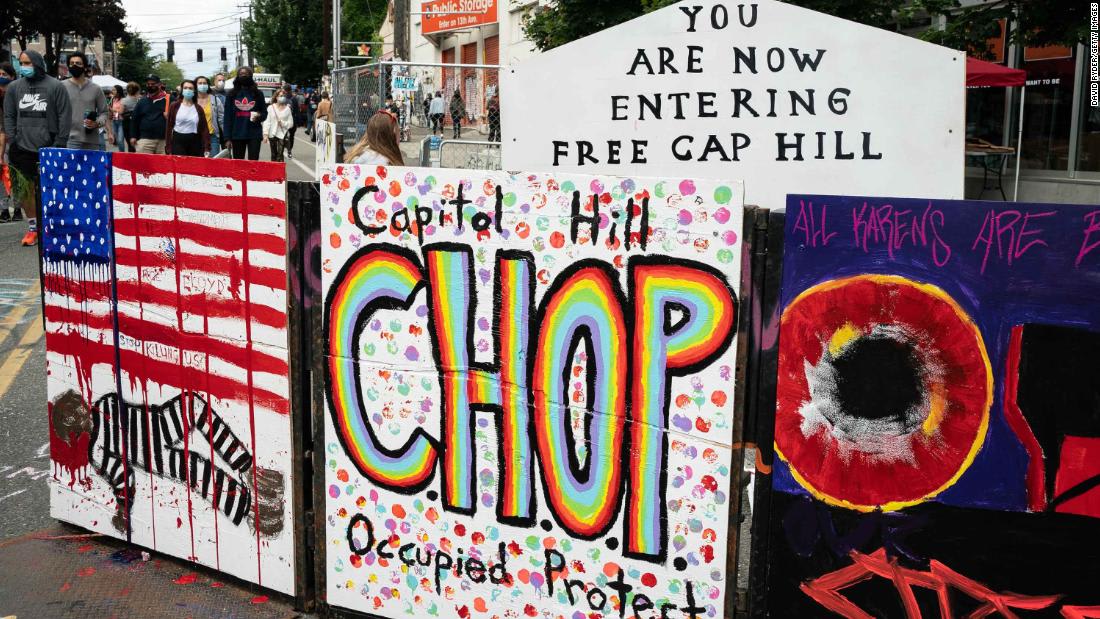 Protesters have occupied part of Seattle's Capitol Hill for a week. Here's what it's like inside

The Los Angeles Police Department told their officers they cannot afford to pay them for overtime worked during the recent George Floyd protests and prior to that during California's stay-at-home order protests, according to an internal memo obtained by CNN Monday.

LAPD told CNN they will compensate officers in the form of time off instead.

"During this extraordinary time, including the full mobilization of our sworn members, the Department has expended more than $40 million dollars in overtime expenses," the memo reads.

"This amount far exceeds any budgetary reserve to address unusual occurrences. Therefore, this notice is to advise department personnel that as of June 7, 2020 pursuant to Memorandum of Understanding 24, Article 6.1D, compensation for overtime shall be in the form of time at the appropriate rate."

Prior to June 7, 2020, sworn officers could accrue up to 150 hours of compensatory time off but that cap no longer applies, the department said in a statement.

Attorney for Rayshard Brooks’ family, L. Chris Stewart, said that he is "not shocked" that the officers involved in the fatal shooting of Brooks had disciplinary complaints against them.

"It's like we're living in that movie 'Groundhog Day.' It's the same thing over and over again," Stewart said.

"It's normally that situation. You know who causes issues or who has had prior issues and complaints. A lot of them don't get justified and stay on the force. So, it wasn't a surprise," he told CNN's Chris Cuomo.

Atlanta police released the disciplinary records for the two officers involved in the shooting. They show that Officer Garrett Rolfe had a use of force complaint from 2016, that resulted in a written reprimand the following year. Rolfe’s record also included several citizen complaints, all with notes that no action was taken.

Officer Devin Brosnan has two firearm discharges on his record, both entered on the record this month.

Stewart said that deadly force was not necessary in this case.

"They let him disengage, get away with the Taser. They know it's not a deadly weapon per their training. They know how it operates. It's not a multiple use weapon. They know the distance he is from them that it's not going to directly connect. It didn't even stop him when they used it on him close," Stewart said.
"It was ridiculous and to say that that officer's life was in danger at that moment and he shot. Look seconds before. He was already reaching for his lethal weapon before Mr. Brooks turned around and pointed that taser."

Philadelphia Mayor Jim Kenney announced plans to initiate a public process to consider the future of the Christopher Columbus statue located in Marconi Plaza on South Broad Street, according to a press statement.

In a letter, Kenney asked the Public Art Director Margot Berg to initiate the appropriate process through the Philadelphia Art Commission for the possible removal of the statue, adding that the totality of Columbus' "infamous" history should be accounted for when considering to maintain a monument to him.

"I believe that a public process will allow for all viewpoints -- especially those of indigenous people whose ancestors suffered under the rule of European colonizers -- to be considered," Kenney said in the statement.
"It’s also my hope that by initiating this process, the current tensions in Marconi Plaza can end. I urge all South Philadelphians attempting to protect the statue to stand down and have your voices heard through the public process.”

No decision has been made yet on whether the City will remove the statue. A boxing apparatus will be installed around the statue on Tuesday in order to preserve it while the Art Commission process is followed, the statement reads.

The Seattle City Council voted unanimously to ban the use of chokeholds by the Seattle Police Department during a council meeting today.

Those crowd control weapons include: “kinetic impact projectiles, chemical irritants, acoustic weapons, directed energy weapons, water cannons, disorientation devices, ultrasonic cannons, or any other device that is designed to be used on multiple individuals for crowd control and is designed to cause pain or discomfort,” according to the bill.

The final bill was also unanimously passed. It requires certain uniformed police officers to not cover the serial number engraved on their badge with a mourning band.

Eight Atlanta police officers have resigned since June 1, according to the Atlanta Police Foundation, a nonprofit organization.

“We are now going into the third consecutive week of unbated protests in which officers have worked 12-hour shifts seven days per week. As you can imagine, their stress levels are exacerbated by physical and emotional exhaustion. We are grateful for the sacrifices they are making every day and will continue to support them while accelerating the programs under the Atlanta Police Foundation’s mission in order to address police reform and other issues the protests and their aftermath have illuminated," Dave Wilkinson, president and CEO of the Atlanta Police Foundation.

The foundation did not state an exact reason for the resignations, but indicated a low moral throughout the department.

The organization had previously reported that 19 officers had resigned in the past 10 days. In an updated statement, the Atlanta Police Foundation said they reported an inaccurate number of officer resignations.

"Earlier today, the Atlanta Police Foundation reported an inaccurate number of officer resignations within the Atlanta Police Department since the start of the social justice protests. Eight officers have resigned since June 1. Due to a miscommunication we reported inaccurately that 19 officers had resigned. We apologize for the error," the statement said.

CNN has reached out to the police department for comment on the resignations.

This post has been updated to reflect the updated number of resignations from the Atlanta Police Foundation.

Atlanta police have released the disciplinary records for the two officers involved in Rayshard Brooks’ shooting on Friday night.

Officer Garrett Rolfe's record shows a use of force complaint from September 19, 2016, that resulted in a written reprimand the following year.

Rolfe’s record also included several citizen complaints, all with notes that no action was taken.

Officer Devin Brosnan has two firearm discharges on his record, both entered on the record this month. An Atlanta Police Department spokesman tells CNN that one of the cases is from a March 20 incident and the other is from Friday night’s shooting.

The Brooks’ incident notes maltreatment or unnecessary use of force, the record shows.

Rolfe was fired on Saturday and Brosnan has been placed on administrative duty.

CNN has reached out to the Atlanta police for more information on the officer’s records.

Howard said that he understands Brooks’ widow and the community who are calling for one system of justice.

“If this had been civilians, charges would have been lodged already,” he said. “People around this country want one system of justice so that both the police and citizens are treated equally. That is what we are hoping to do by making a decision Wednesday.”

Howard said that when he watched the video already knowing that Brooks died, he was expecting to see someone who was resisting and not cooperating with the police.

“That was the exact opposite of what happened with Mr. Brooks. He was very compliant,” Howard said. “There is no reason for Mr. Brooks to end up dead because he fell asleep in a drive-thru or that he was intoxicated.”

“Was it necessary to shoot Mr. Brooks to save his life or to save someone else’s life. Because if Mr. Brooks was shot for some other reason, then it’s not justified,” Howard said.