Rayshard Brooks was shot twice in the back, according to a release by the Fulton County Medical Examiner’s Office.

The report says that Brooks died from organ damage and blood loss from the two gunshot wounds.

The autopsy, performed on Sunday, lists Brooks’ cause of death as gunshot wounds to the back, the manner of death is listed as homicide.

Fulton County District Attorney Paul Howard's told CNN "we actually get a chance to hear the officer's first statement after the shooting took place. And what the officer said is not that his life was saved. What his statement was, he said, 'I got him.'"

Miller said he and the family are aware of the "I got him" statement.

Miller also discussed the autopsy, saying they have not seen the report, but they know some of the things that will be in it.

"We know he was shot twice in the back. Once in his mid-back and once in his buttocks and those shots ended up killing him," Miller said.

Regarding charges, Miller said "this is a little different than say George Floyd's murder because it is still a murder, but the legalities just, they fall differently when there is a scuffle and a taser and then a fleeing person who is killed."

As for what Miller expects the charges to be, he said "it probably will not be murder."

"That's a very hard thing to charge," Miller said. "You know, you just look at all the other cases that were a bit clearer and, you know, just as deadly to the client, and they were not charged with murder."

Miller did say it was good people and city leaders are taking steps "to mitigate problems."

"But it is not justice, and we don't really think it can ever be justice because a man's life was taken, children lost a father, and a wife lost a husband."

Bodycam video released by the Atlanta Police Department show the moments leading up to the fatal shooting of Rayshard Brooks.

A group of volunteers painted the words "Black Lives Matter" in yellow on a street in Brooklyn, New York. The mural mimics the painting on a street in Washington D.C, according to an Instagram post by Councilman Robert E. Cornegy Jr.

Cornegy is a councilman for the 36th District, which includes the Bedford-Stuyvesant and part of the Crown Heights neighborhoods.

Cornegy said the NYPD closed the street so the mural could be painted, and that the NYC Department of Buildings assisted with moving construction equipment from the street so that the artist could “complete his vision unadulterated.”

NYC Mayor Bill de Blasio previously announced BLM murals would be painted in each of the five boroughs, but said on Sunday that this mural is not part of his five borough plan. The mayor's office is aware of the mural and worked with Councilman Robert E. Cornegy, Jr. to make it happen, said spokeswoman Julia Arredondo. 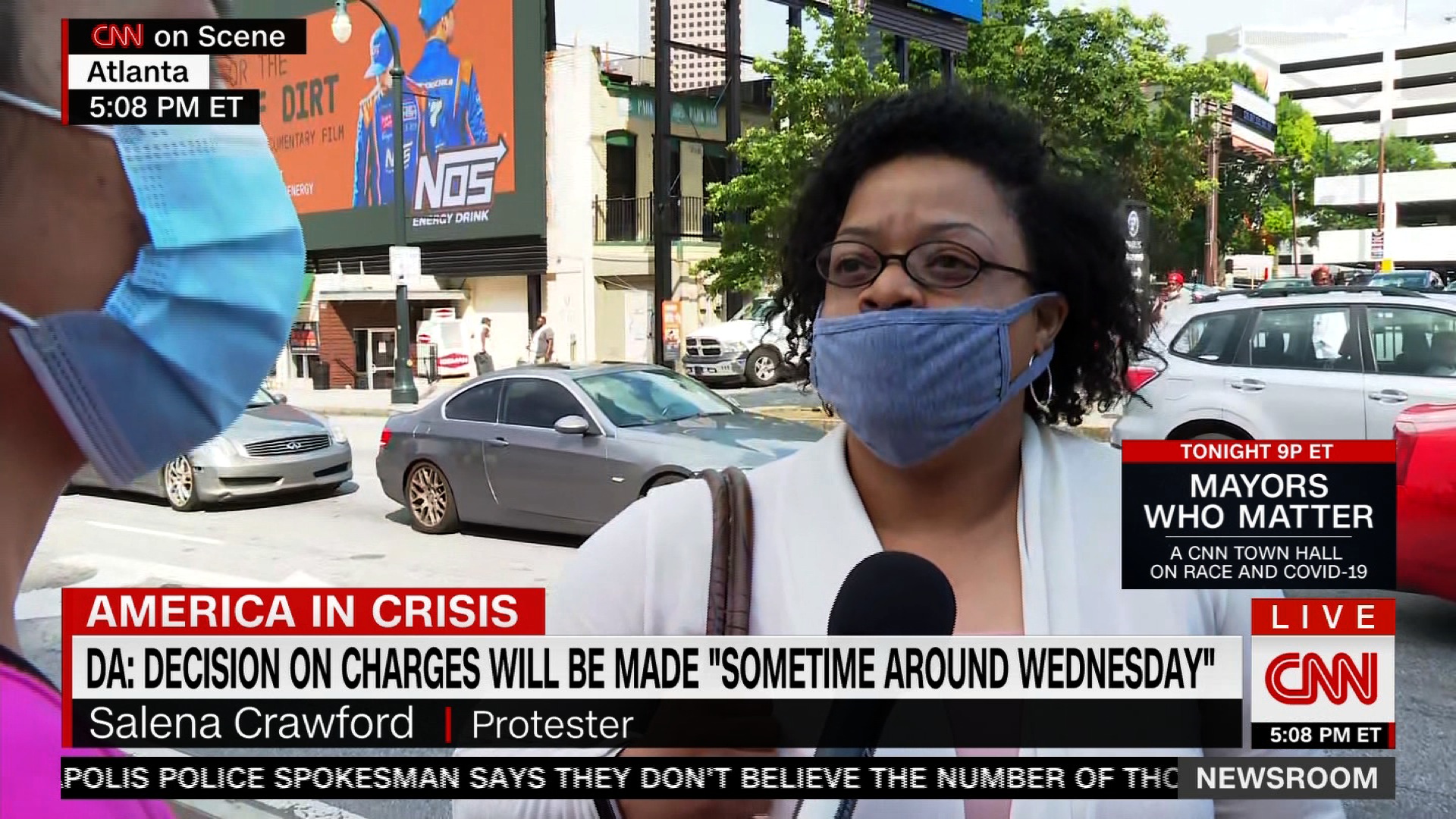 She said the frustration of watching black men killed in the streets is too much for her family, and so she wanted to give her sons an outlet to voice their pain.

Having to explain to my sons the same traumatic story over and over again, it’s just too much,” Crawford said.
“So I wanted to give my sons an outlet and I wanted to have an outlet for myself to come out and be able to protest and do it the right way without the violence, without hurting anyone and be able to express our frustrations with each other and actually come up with solutions."

Her 16-year-old son, Seth, was with her at the protest. "I feel frustrated when it happens," he said.

Beyoncé Knowles-Carter wrote a letter to the Kentucky Attorney General calling for justice in the wake of the Louisville Metro Police's killing of Breonna Taylor and to ultimately “demonstrate the value of a Black woman’s life.”

The singer specifically called on Attorney General Daniel Cameron to bring criminal charges against the three officers involved, commit to transparency in the investigation and prosecution of the officers’ criminal conduct, and to investigate the LMPD’s response to Taylor’s murder as well as the “pervasive practices that result in the repeated deaths of unarmed Black citizens.”

In the letter, Beyonce notes repeatedly that it’s been three months since Taylor’s death and the “LMPD’s investigations have created more questions than answers,” specifically pointing to what she says is discrepancies in the incident report and claims by the LMPD. She also notes all officers involved in the incident remain employed.

“We are extremely grateful that so many icons have used their voice to demand justice for Breonna Taylor. As Beyoncé and others have said, it has been 3 months since Breonna was murdered and her killers have yet to be fired or criminally charged. It is time that our elected leaders, including Mayor Fischer and AG Cameron, stop hiding behind the guise of what we know has been a botched investigation and do the right thing by firing and charging John Mattingly, Myles Cosgrove, Brett Hankison, Joshua Jaynes for their roles in the murder of Breonna Taylor.”

An autopsy of Rayshard Brooks was conducted Sunday as part of the homicide investigation, Fulton County District Attorney Paul L. Howard said in a statement.

We are still experiencing some difficulty in obtaining all of the body cam and dash cam footage from the Atlanta Police Department," the statement says.

Several technical requirements are pending before the DA reaches a decision on possible charges. These include confirmation of the ballistics and a preliminary report from the medical examiner, the statement says.

A local attorney provided the names of two witnesses. The DA is working to speak with them before making a decision midweek, the statement says.

Atlanta protester Joseth Jett explained to CNN's Boris Sanchez on Sunday why someone burned the Wendy's restaurant where Rayshard Brooks was killed in a police shooting.

“I do feel bad about people who have lost their job, but at the same time, we burned this building and not any other building around here," Jett said. "We burned this one specifically because of what happened here … This goes back to what our mission is, making sure that there is justice served for the person that died over here at this Wendy’s.”

Brooks was fatally shot during an encounter with police on Saturday.

“At the end of the day, the man ran. The man tried to escape. There was absolutely no reason why a gun needs to be pulled when a man is trying to run,” Jett said.

Fulton County District Attorney Paul Howard on Sunday tells CNN's Fredricka Whitfield that he thought Rayshard Brooks was cooperative in the 22-minute conversation with the officers shown on video.

"When I saw that footage that you just displayed. That conversation went on about 22 minutes with Mr. Brooks talking to these two officers, and it's very difficult when you see it, when you see the demeanor of Mr. Brooks to imagine that some short time later, it ends up with him being dead," said Howard.

Asked how he would describe Brooks's demeanor, Howard said, "I thought it was cordial. He was very cooperative. He answered the questions that the officers asked. He did not seem to present any kind of threat to anyone. And so the fact that it would escalate to his death just seems unreasonable."

He added, "It just seems like this is not the kind of conversation and incident the should have led to someone's death."

Howard said his office has to make a key decision and determine whether or not the officers felt their lives were in danger.

"Specifically, Officer Rolfe, whether or not he felt that Mr. Brooks, at the time, presented imminent harm of death or some serious physical injury. Or, the alternative is whether or not he fired the shot simply to capture him or some other reason," Howard said. "If that shot was fired for some reason other than to save that officer's life or to prevent injury to him or others, then that shooting is not justified under the law."

Asked by Fredricka Whitfield: "Won't it be presumed that that officer will say that he felt that his life was in danger and that is why he fired the shot? Howard said: "Well, there is one good thing about video Fredricka because, in the video, we actually get a chance to hear the officer's first statement after the shooting took place. And what the officer said, is not that his life was saved. What his statement was, he said, 'I got him.''

Fredricka Whitfield followed up: "So given that, that gives you that evidence, am I hearing you correctly, that he did not believe his life was endangered and that the firing of his weapon was not justified?" Howard replied: "What that does, it gives us a fact to consider. So, if you believe that someone is firing at you with a deadly weapon, then you ask yourself questions. Well, would you attempt to take cover? Would you immediately proceed after that person? And again, as I mentioned, the statement that was made and what we have the task of doing is adding all of those factors together, and then reaching the correct legal conclusion."