Around 450 businesses across New York City had storefront damage and in some cases were looted in late May and early June, according to the Department of Small Business Services.

The department does not have an estimate for the total cost of damages and notes the estimate of the amount of buildings damaged may change, according to Samantha Keitt, the department's spokeswoman.

Keitt said the estimate covers damage reported between May 29 and June 9.

Last week, Mayor Bill de Blasio announced the Small Business Emergency Grant, which would give grants of up to $10,000 to small businesses impacted by looting and damage to their storefronts, starting in the Bronx. These grants will help "impacted minority and women-owned businesses as well as those with annual revenues of less than $1.5 million, with their recovery efforts, including repairs, security systems, locks, inventory and more," according to a press release.

The only way we will move forward and get small businesses back on their feet is by coming together as a community," said Mayor Bill de Blasio in a press release. "Our small businesses are not going anywhere. They are strong and resilient and they will be back, and we are here to help them do that."

Funding for the grant was provided by SOMOS Community Care, which pledged $500,000 and Signature Bank, which donated $750,000.

Police arrested more than 100 people Saturday across London for protest-related offenses, according to a tweet from the Metropolitan Police.

Protesters showing solidarity with the Black Lives Matter movement, as well as counterprotesters, demonstrated across London on Saturday, mostly peacefully.

[Goodell] saying that Black Lives Matter is almost like a slap in the face," Bennett said in an interview with The Daily Beast. "Black talent has been exploited at a high level in the NFL. He knows Black Lives Matter, because without black players the NFL wouldn’t be as lucrative as it is."

Goodell said the league should have listened to players earlier about racism concerns in response to NFL players calling on the league to condemn racism and support its black players.

"Is the intent of the NFL to really make a positive impact or is it not to be seen as if they don’t respect the players?" Bennett asked.

"We have to continuously push the NFL to change its core values and change its moral compass on a consistent basis. If not, shame on us and shame us for real. We have the opportunity to hold Roger Goodell and the rest of the bosses," including team owners like Jerry Jones, he said, to account, and face "the reality of the suppression and oppression of the people."

Bennett goes on to say about team owners backing President Donald Trump, "If you're supporting him, then your letter is really null and void."

In 2018, the three-time Pro Bowler published "Things That Make White People Uncomfortable," a book in which he discussed racism, police brutality and the role black athletes play as political activists.

Bennett told CNN in 2017 that he would not stand for the National Anthem until he saw "equality and freedom" as he took a stance against police brutality and injustice when he played for the Seattle Seahawks. But in 2019, as a member of the Dallas Cowboys, Bennett stood for the anthem because, according to him, his teammates asked him to.

Scenes in London became chaotic Saturday as a group of men carried an injured man away after he was allegedly attacked by some of the crowd of protesters while police tried to intervene on the Southbank near Waterloo station.

Here's pictures from the scene:

The Georgia Bureau of Investigation (GBI) provided an update on the fatal police-involved shooting of a black man at an Atlanta fast food drive-thru last night.

According to GBI Director Vic Reynolds, at around 10:33 p.m. ET on Friday night, Atlanta Police requested the assistance of the GBI in an officer-involved shooting at a Wendy's restaurant on University Ave in Southeast Atlanta. The incident involved two Atlanta Police officers and Rayshard Brooks.

The GBI has continuously worked on the investigation since being called into the matter Friday night and has spoken with several witnesses and viewed different surveillance videos including Wendy's surveillance footage and video taken by witnesses posted to social media, Reynolds said in a news conference Saturday afternoon.

The statement made early Saturday morning by the GBI was released after officials reviewed body cam footage provided by the APD.

What happened, according to the GBI: Reynolds said it appears that Brooks was under investigation by the APD for a suspected DUI offense, and that sometime during the course of the investigation, he became engaged with two Atlanta officers and that engagement turned into a physical confrontation, as seen on video.

During the course of that confrontation, Brooks was able to secure the Taser from one of the Atlanta police officers, Reynolds said.

Based on surveillance footage from Wendy's, GBI says it appears that Brooks ran off with one of the officers' Tasers and made it only short distance away, the length of what is described as 5-7 parking spaces, and then turns around, and points the Taser at the Atlanta officer.

"At that point the Atlanta officer reaches down and retrieves his weapon from his holster, discharges it, strikes Mr. Brooks there on the parking lot and he goes down," Reynolds said.

Moving forward: Reynolds said he instructed agents to expedite the investigation, saying he wants to be "very, very quick" but still "very thorough."

"We have to do it the right way. I'm sure when I speak to the public that anybody who had a loved one in this situation on either side, either as a law enforcement officer or as someone who has been involved in a situation where officers used deadly force that they want the investigation done correctly. They want it done thoroughly, and they want it done right," he said.

The GBI says it will make surveillance video of the incident available to the media Saturday evening with a digital enhance of what the GBI focused on in the investigation into the incident. 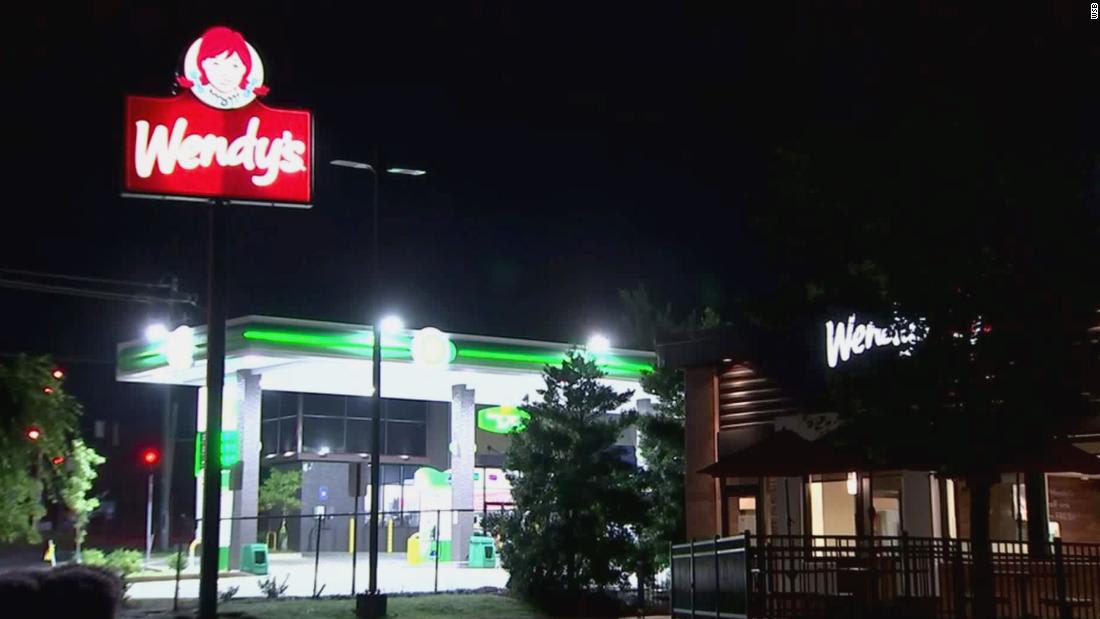 The US Secret Service issued a statement Saturday saying an “agency employee” used pepper spray on June 1 during efforts to secure Lafayette Park and clear protesters from the area just prior to President Trump’s walk from the White House and across the park.

Trump was headed to his photo op holding a bible outside St. John’s Episcopal Church.

In the statement, the Secret Service noted the agency previously “released information stating the agency had concluded that no agency personnel used tear gas or capsicum spray during efforts to secure the area near Lafayette Park on Monday, June 1, based on the records and information available at the time. Since that time, the agency has learned that one agency employee used capsicum spray (i.e., pepper spray) during that effort.”

“The employee utilized oleoresin capsicum spray, or pepper spray, in response to an assaultive individual,” the agency also said in the statement.

Earlier this month, a spokesperson for the US Park Police said that the department had made a mistake by earlier denying use of tear gas to clear peaceful protesters from a public park outside the White House on June 1.

Sgt. Eduardo Delgado, a spokesperson for the Park Police, told CNN on June 5, he realized the department could have called the pepper balls it used "tear gas," and that it was a "mistake" to say the force hadn't used tear gas during the operation.

The Georgia NAACP branch is calling for Atlanta's police chief Erika Shields to be terminated immediately after the death of Rayshard Brooks Friday night.

"The City of Atlanta must not only address this with their words, but also their actions," Woodall said.

This comes after an Atlanta police officer shot and killed Brooks at a Wendy's drive-thru Friday night after he resisted arrest and struggled for an officer's Taser, the Georgia Bureau of Investigation said in a statement.

There has been "complete silence from the City of Atlanta," NAACP President James Woodall said in the press call. "The silence is deafening."

Woodall then quoted Martin Luther King Jr saying, "In the end, we will remember not the words of our enemies, but the silence of our friends," after calling on the termination of Police Chief Erika Shields.

The NAACP president also said the Georgia branch has hired a private investigator and is calling on Wendy's to release the surveillance footage from the incident.

CNN has reached to Atlanta Police Department on Saturday multiple times without receiving a response.

A relative of Rayshard Brooks, Decatur Redd, spoke with reporters and a crowd gathered outside of the Wendy's in southeast Atlanta where the fatal shooting took place on Friday night.

"I don't know how to do this because I never knew that I was going to have to do this," a visibly distraught Redd told the crowd.

"I've watched this on the internet, from the whole George Floyd situation to us coming together like we're doing and this whole thing landed on my doorstep with my little cousin," Redd said.

The Georgia Bureau of Investigation said in a statement that an Atlanta police officer shot and killed a man at a Wendy's drive-thru Friday night after he resisted arrest and struggled for an officer's Taser. The GBI identified the slain man as Rayshard Brooks, 27, of Atlanta, who was African American.

Redd said he's seen the video(s) circulating on social media and that it's the worst thing that he could wake up to, knowing that his whole family saw the video and what happened to their cousin.

Redd pleaded to authorities to investigate the situation and not let Brooks die in vain.

"We've been watching this happen for so many years, with young black boys around the country just dying in vain —I just don’t want that to continue and keep happening like that," Redd said.

“I didn’t think it would hit right here, man. I thought this city was better than that. They’ve got to answer. Somebody’s gotta say something,” Redd said, “We need to at least know that the city is with us.”

CNN has reached out to the Atlanta Police Department (APD), GBI and the mayor's office but they have not responded.